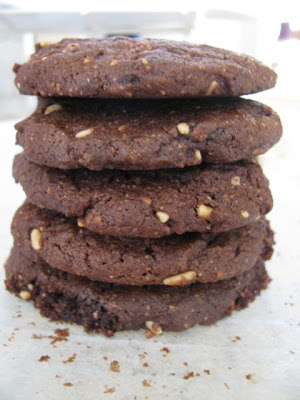 When we were young my mum would sometimes call me a ‘clever cookie’. Today I want to you tell you about a clever cookie. Ricki Heller is a fellow blogger who writes the wonderful Diet, Dessert and Dogs (which I have raved about before), and has recently produced a cookbook called Sweet Freedom. I have had my copy for a few weeks and already have made some of the wonderful sweet treats within.Sweet Freedom is subtitled ‘desserts you’ll love without wheat, eggs dairy or refined sugar’. Sounds virtuous and wholesome, doesn’t it? Don’t be fooled by Ricki’s healthy attitude to her sweet treats. She loves desserts and has spent many hours in the kitchen devising recipes that taste fantastic but are suitable for those with food allergies and intolerances. As well as vegan baking, there are many recipes for gluten free, nut free and soy free diets. 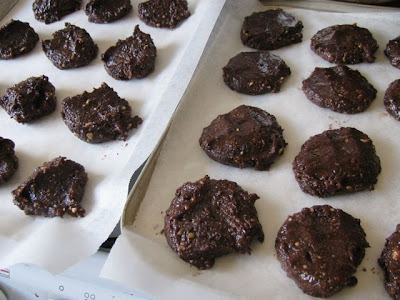 I can highly recommend that book. As a vegetarian I have no allergies and few limitations when it comes to baking but I do love an interesting recipe. From my first discovery of Ricki’s blog I have been delighted by her recipes, which have introduced me to new ingredients and diets without ever sacrificing any taste. In fact Ricki’s recipes are full of interesting textures and flavours. I have never been so keen on lots of eggs or dairy in baking so I find her alternatives liberating. 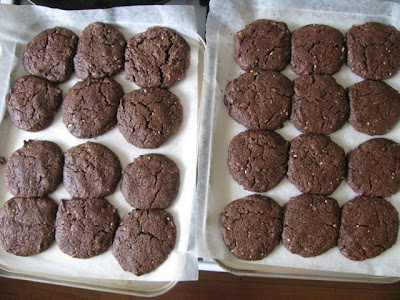 You may be tempted to just stick to the blog rather than buy the book but I would encourage you to consider making the purchase. The book and the blog work together nicely. While Sweet Freedom doesn’t have lots of photos, the blog has many gorgeous photos and lots of entertaining and chatty introductions. But there are some really good advice in the introduction to the book and I love having all the recipes together in a book I can prop on my recipe holder rather than finding it on the computer each time. The index is fantastic. When I bought some barley flour on the weekend (partly because it is used a lot in the book) I was able to look it up in the index. And if you do have allergies or dietary restrictions, you will love the ideas in the book. 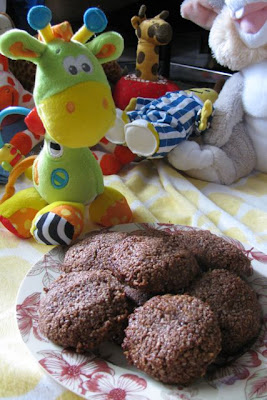 But the proof is in the pudding, so to speak. Ricki has asked that her recipes in the book are not reproduced unless on her blog. Quite a few recipes are on her blog so it is easy to respect her wishes. So I will tell you about the three cookies I have made from the book so far and share the recipe for Chocolate Peanut Butter Fudgies from the blog.As I said above, I love Ricki’s recipes for taste rather than dietary restrictions. So I find myself constantly making changes to the recipes to allow for what is in my pantry. I don’t always have the variety flours nor do I have sucanat (unrefined sugar) that Ricki uses a lot. So I haven’t managed to make one recipe from the book without some changes. 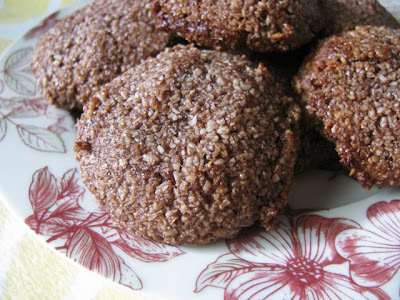 The first recipe I made was the Coconut Macaroons. It was an evening a few weeks back when I had been out for meal at a pub with friends. My meal was very ordinary and I came home hungry for decent food. I had been planning to make the macaroons for a few days but I wanted chocolate. So I made the macaroons with a spoonful or two of cocoa powder. I was so happy when they came out of the oven. They tasted so delicious and got even better over the next day. They were as chewy as any macaroons but a bit more substantial with the addition of almond meal as well as coconut. I would never have expected to be able to make macaroons without eggs and have them taste so good. 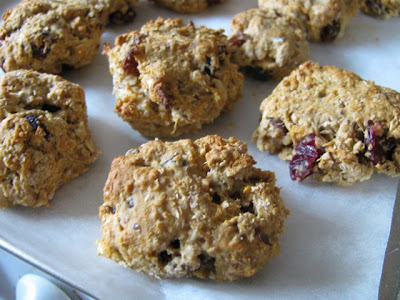 The next recipe I made was the Carrot Raisin Oatmeal Cookies last week. I made a few changes, some due to pantry limitations and some due to distraction. I used honey instead of maple syrup, wheat flour rather than spelt and I substituted cranberries for some of the sultanas (raisins). They reminded me a little of the rock cakes we had a lot as kids. When I told E they were carrot cookies he said you couldn’t really taste the carrot. But they were a little on the dry side the next day and, as I remembered racing about making the recipe while Sylvia grizzled, I realised I didn’t add any oil. Oops. They were still very good, so I imagine they would be excellent with oil.Lastly I made some Chocolate Peanut Butter Fudgies this week. I remember being excited by the idea of eggplant in a cookie when Ricki posted the recipe on the blog last year. Ooh-ah – who could resist such an idea! (OK, many people would draw the line, such as most of my family, but I love quirky ingredients.) 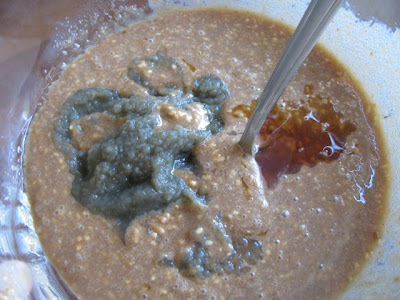 I made a few substitutions – wheat and barley flour instead of spelt, brown sugar instead of sucanat, and less vanilla essence. My only quibble with the recipe is that it called for eggplant puree without giving an indication of how much eggplant was needed or how to make it. I’ve never seen eggplant puree for sale here so made my own. I did a few other things that would earn Ricki's disapproval. I was a bit lackadaisical with measurements - measuring sugar by weight and other ingredients by cups, and, as you will see in the photos, my cookies were too close together.The biscuits (or cookies) were delicious - rich, dark and very chocolatey. When they came out of the oven and cooled they were a little crisp on the outside and soft on the inside. I stored them in an airtight container and found they went soft in there but after a day or so they became a bit more chewy. 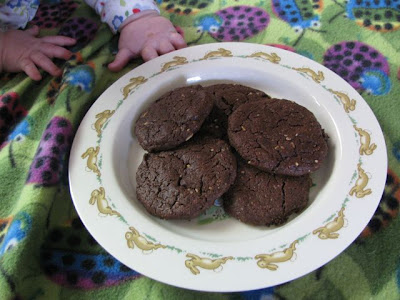 On the night I made them, E told me they were very nice and he went back for another. Then last night I said I forgot to tell him the secret ingredient and asked him to guess. First guess was eggplant. I think he had sought the most unlikely and unappealing ingredient. His jaw dropped when I said yes. But it didn't stop him eating them. They are very moreish and the ones in the biscuit tin didn't last long. I am very happy to report that there are still some in the freezer. Oh joy! Even Sylvia wanted a taste.Chocolate Peanut Butter Fudgies
Adapted from Diet Dessert and Dogs
makes about 30 biscuits

*I used 100g eggplant but next time would use a little more. I brought it to the boil, simmered it for 10 minutes, then drained it and sieved it. I pushed some of the water out through a sieve before I sieved it but ended up using some of this because I was a little under ⅓ a cup. Alternately you may substitute another moisture-rich vegetable, such as cooked zucchini, or use unsweetened applesauce.Preheat oven to 190 C or 375 F. Grease or line a baking tray.In a large bowl, cream the peanut butter, sugar and oil with a spoon. Stir in the maple syrup, vanilla, vinegar, and eggplant. Add the flour, cocoa, bicarb soda, baking powder, and salt. Stir to mix well. The dough will be quite sticky but barely hold its shape.Drop tablespoonfuls of dough on the prepared baking tray about 2 inches apart. (They will spread - see photos of trays of uncooked cookies with one tray of flattened and one before being flattened, and the cookies once cooked.) Use a slightly wet hand to flatten slightly and shape if necessary.

Bake for about 12 minutes, rotating pans halfway, until cookies are puffed and cracked on top. Cool biscuits on the tray. They will firm up as they cool and may be frozen.On the stereo:
Mantras: The Division