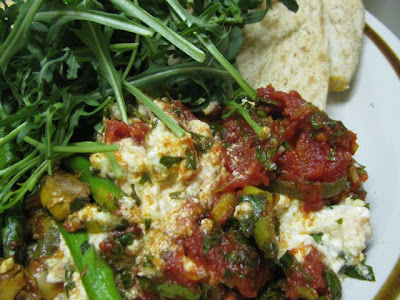 I have had a productive day. This morning I finally got the plumber over to install a shiny new tap that swings from side to side (rather than being fixed in place). I was so pleased I thought I could just sit feeling proud of myself for the rest of the day. But Sylvia decided to sleep for almost three hours this afternoon. Such uninterrupted quiet calls for a little organization (before the inevitable evening with a sleepless baby). 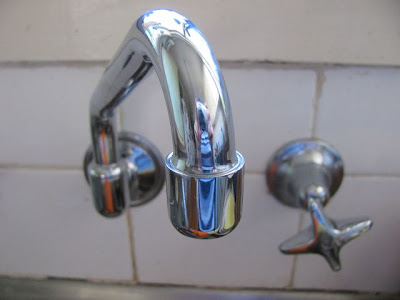 While she slept I hung out the washing on the line, made stock and potted a tomato plant I had been given. I have never potted plants by myself before but I was a bit worried about this one dying so I had a go and will check with my mum when she gets home to see if it is ok. I did some blog housekeeping and was inspired by my blog for ideas to make dinner tonight. I have a bunch of spring onions that I don’t want to get old and wrinkled so I have used some in a variation on Lentil Salad with Halloumi and Asparagus. I even made a fancy pizza for lunch. I bought some delicious pita bread yesterday and planned to make us pizza tonight but the pitas were already showing mould spots today so I thought I better use what I could salvage. I fried some eggplant with a bit of oil spray on my non stick frypan. Then I put pesto, eggplant, mushrooms, tomato and cheese on top and grilled it. 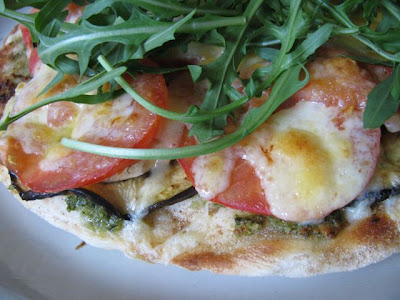 The pita bread was part of my bounty from a long walk down Brunswick way yesterday. I paid a visit to La Manna Fresh for last night’s dinner. I had seen a tomato and feta bake in a food magazine. It called for 400g of feta cheese but at $10 for a packet of 200g I thought that one packet was enough. A handful of rocket and a bunch of asparagus was all that I needed to complete dinner. We just missed a train going home and had to sit waiting for another. As we waited, I spied a flash of white in Sylvia’s smiling mouth. Somehow her first tooth had come through with minimum of fuss. Although, maybe we can blame her unsettled sleep lately and red cheeks on the tooth. Last night's recipe was a good simple one for a night when I was tired out by the little rascal. I especially appreciate something easy when I need to ask E to help out. When I sat down to feed her I instructed E to stir in the herbs and pour into the casserole dish when the timer rang. Even he could do that, although he wasn’t sure what to do with the feta in the dish. I had forgot to tell him it had to be baked with the tomato sauce. I added spring onions because I had them in the fridge and I used parsley rather than oregano but I think any fresh herbs you fancy would do. E suggested adding olives. 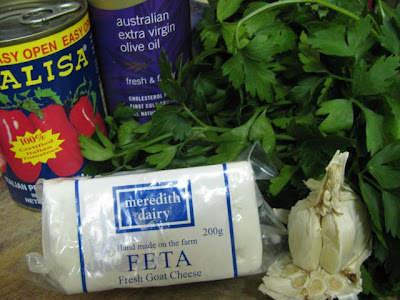 The bake didn’t look quite like in the picture but it tasted lovely with some sautéed asparagus, fresh rocket and warm pita bread. However, the below proportions between the two of us were ample with some pita bread because it was quite intense. E said half would have been enough. I am glad he liked it because I have already filed this in the mental list of recipes for a tired night.
Baked feta with tomatoes
Adapted from BBC Australia Good Food August 2009
Serves 2-4

Preheat oven to 220 C. Heat olive oil in frypan over medium. Fry garlic for 30 second. Add tomatoes, bring to the boil, stir and then simmer for 15 minutes. Remove from heat and stir in herbs and spring onions. Crumble feta into a small casserole dish. Pour tomato sauce over feta and bake for 20 minutes until hot and bubbling.On the stereo:
From the Witchwood: The Strawbs