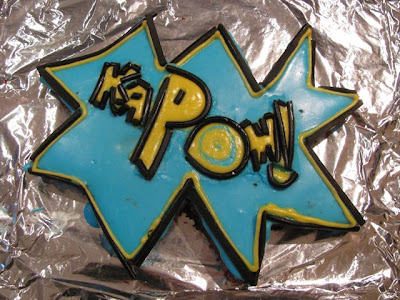 My oldest niece chose a superhero them for her birthday party yesterday and cake was on the menu. The previous night I baked a chocolate birthday cake and gingerbread biscuits while E looked after Sylvia. Then on Friday, Sylvia and I headed down to my parents’ place where the party was taking place.We arrived just as my brother Paul got home with a gaggle of nieces. Little Ella came with me to buy a few supplies including liquorice at a lolly shop. I was impressed that when I asked if she needed anything, she shook her head. I checked with her mum Susie later who said Ella prefers tomato to lollies. (Please take note, Sylvia – but ignore her dislike of pumpkin!) Ella also managed to get into the blue food dye so that her mum had to wash her mouth out. (Note to self: don't leave food colouring unattended when small children about.) 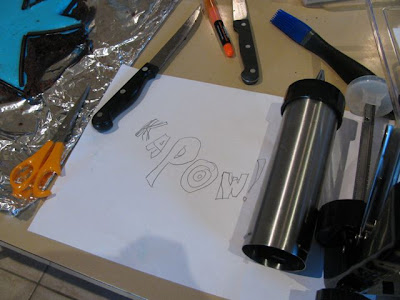 I had planned to make a cake looking like a superhero comic onomatopoeia speech bubble. You know the ones I mean? The Pow! Biff! Bam! words that punctuated comics and the 1960s Batman and Robin television series when the heroes and villains had a fight. I found this webpage of bat words. It seemed a fun way to have something instantly recognisable as superheroic without being too complicated. I had also suggested to the birthday girl, Quin, that we do some cut out biscuits (cookies) in superhero shapes. I produced Superman’s shield, Batman’s bat symbol, the Flash’s lightening bolt, Spiderman’s web, a few ducks and lots of gingerbread man buddies. The last two might seem an odd choice of shapes but I couldn’t find any superhero cookie cutters. Instead I bought a few other new cutters – a duck, a wombat and a wee gingerbread man. It was taking me ages to cut the shapes so I use the cookie cutters at hand. E reassured me there is a Superduck superhero, though he didn’t look like a rubber duckie. We decided the little men would be the villains. The plan was for the girls to help with decorating the biscuits. 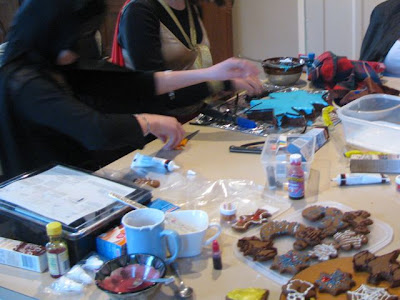 By the time the doorbell heralded the arrival of the first of Quin’s friends, we had started mixing icing and purchased a few ready-made gel icing tubes. The guests had been asked to dress as a superhero so there were lots of impressive costumes with masks, capes and lycra. They joined in the decorating with gusto and giggles. The discussion of the gingerbread men as baddies stimulated lots of fun and creativity. They gave them masks, stripes, suits etc. Paul’s partner, Miriam also helped out and made some impressive designs on Superman’s shield. Making up a good red icing is quite a challenge, so this was no mean feat. 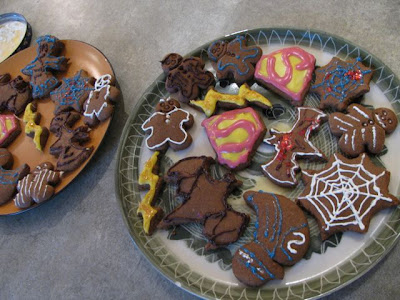 Once the biscuits were done, the girls went off to play some loud video games, which made me feel quite old. But it wasn’t long before the bumper order of fish and chips arrived. This is a traditional Friday night meal in my family – a grease and oil change, we used to joke! Great comfort food, if not overly healthy. Easy way to cater to a crowd. I had chips and potato cakes after the corn jack went missing. 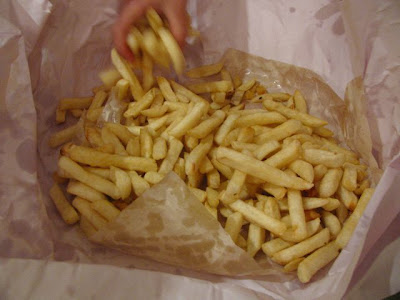 Next was the ceremonial blowing out of candles on the cake following singing happy birthday by candle light. The cake was a success. Susie and Grace were happy to have a gluten free cake. It tasted good to everyone else (although when I took a piece home to E he made a funny face at the liquorice on top). Quin was very pleased with her cake and helped out with the liquorice outlines around the edges.

I have reposted the recipe because it was originally posted on my first blog post for the Vampire Cake and I was pleased to find it still worked well with regular milk rather than evaporated milk and marmalade rather than raspberry jam (and mixing the baking powder in the cake tin when I realised at the last moment that I had forgot it). I have also posted step by step instructions on making the cake, though it was fairly straightforward. 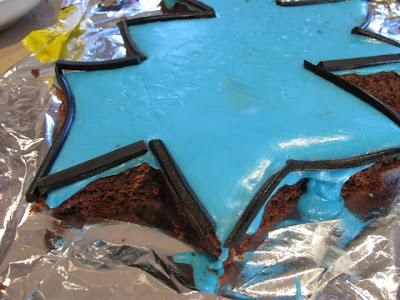 If I did the superhero cake again I would be tempted to do BAM rather than KAPOW. Kapow looked cool but was harder to fit on the cake and to outline with liquorice. I also would dry the blue icing before piping onto it because I think that was why my icing outlines weren’t as sharp as I had hoped. 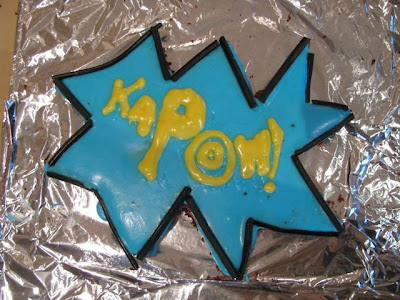 Then party organisers, Paul and Miriam, made everyone raspberry spiders. These are raspberry lemonade with a scoop of ice cream so they are all fizzy and creamy. I think they are like root beer floats. I should have asked Miriam who is American. She told me that in America they always had cake and icecream for birthdays but no one does it here. I can think of a few people who would enjoy it. 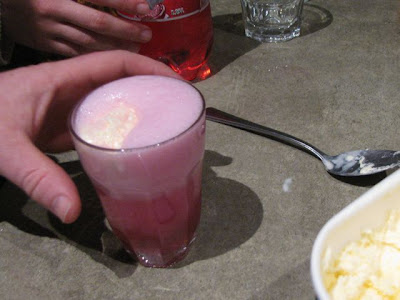 Once well fed, the girls returned to their activities. I had found some fun superhero party games ideas when searching for the cake but the best was the idea of having a Wonder Woman’s lasso of truth game in which guests had to lasso soft toys. Imagine the questions you might ask them if you know they would tell the truth! I also had superhero songs going through my head when thinking about the cake so I couldn’t resist putting together a little superhero playlist below even though I know it wasn’t needed for this party.When we left there were lots of gingerbread superhero biscuits left. (I spoke to Paul today who said that the slumber party went well and all the bickies were devoured.) So I took one to send us on our way. It was a bat bickie with 'evil' piped across it in icing. I felt like it was a fitting end to the night to take the Bat of Evil and my cackling sidekick Sylvia and swoop off into the dark night. 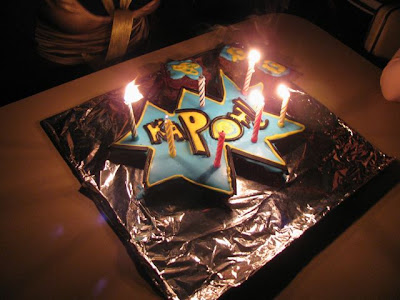 How to make a Superhero Kapow Cake

Pour cake mix into prepared tin (it is quite runny). Bake in moderate oven for 30 minutes or until cooked. Stand cakes in pans 5 minutes, turn onto wire rack to cool. Sandwich cakes together with whipped cream.