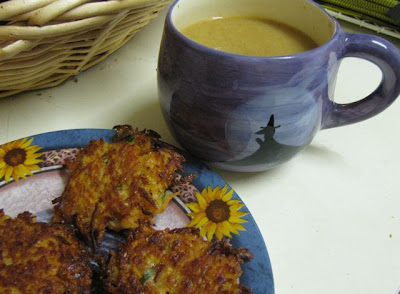 The last week has not been my finest in the kitchen. I have baked a sponge cake that didn’t rise as it should. I baked bread that kept rising much more than it should. I baked cookies and forgot to add the oil. I made Scottish vegetable and barley soup that should have lasted a few days but went sour after a couple of days. I dropped apple puree on the floor and pikelets in the cat’s water. So you will not be surprised to hear this soup and fritters I am posting today are nice but not great. 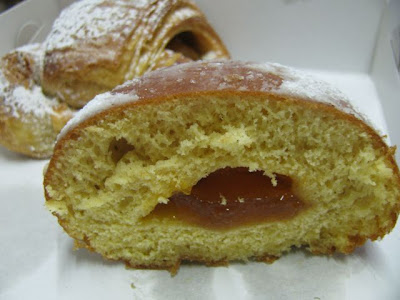 Actually I was going to bake but circumstances kindly suggested I didn’t. We went to Andre’s coffee house for brunch on Saturday. The drinks cabinet has arrived and I sampled his mum’s excellent silverbeet and raisin pastries. Best of all was the slice of his birthday cake that E and I shared. It was a fancy creation of layers of sponge cake, custard and cream made by the Greek cake shop next door. We also had my friend Alison visiting with a tray of Sugardough pastries. The bomboloni with chocolate filling was particularly pleasing, so unfortunately it had disappeared before I took the above photo. 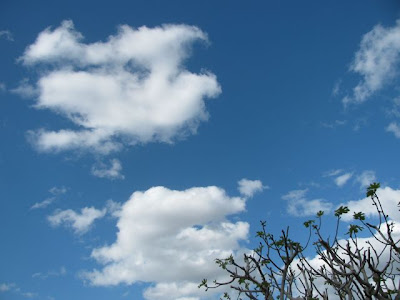 Rather than baking yesterday, I had a lovely bike ride through a sunny afternoon filled with people socialising on old couches on the verandah and kids playing football on the street. I had planned to go to Wholefoods but firstly had a look in the gift shop over the road where I purchased some gifts. I found a little box of Beatrix Potter cardboard blocks for Sylvia. Once I had the set of blocks I had to be restrained at Wholefoods because I was limited with what I could fit in my bag – so much smaller than the pram. 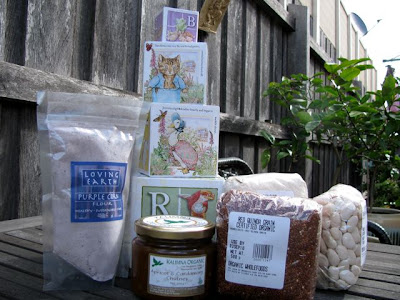 I don’t get to such ‘health food’ stores often enough these days so I came home with an exciting swag of goodies. I bought some apricot and cardamom chutney, barley flour, red quinoa, dried lima beans and purple corn flour. It is not necessarily the cheapest way to shop. When I told E what I paid for the chutney he said he expected them to come around and serve it for that price. But it is such a pleasant way to shop. So much variety and I had a friendly chat at the counter about cooking purple food. 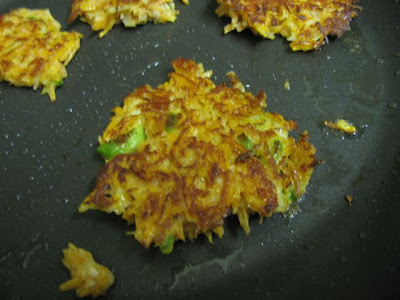 For dinner on Saturday I made a celery soup and carrot and potato fritters. These recipes were suggested by what vegetables needed to be used. I added some cheese to the fritters because it had sat in the fridge long enough. The soup was quick but the fritters took some time for grating the vegetables and frying. After my efforts, E said he wasn’t keen on the soup and the fritters were a little greasy. I was not sure about baking or grilling the fritters but might try that in future. 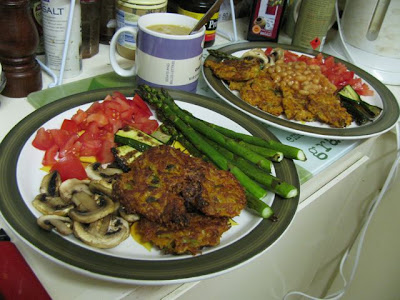 Last night we had the leftovers. E had baked beans instead of soup and I grilled some vegetables to go with the fritters. E agreed that the fritters were much better the second night after sitting (cooked) in the fridge overnight. I put them in a moderate oven for 15 minutes to reheat. The recipe suggested serving with a minted yoghurt but I forgot to buy yoghurt so I served them with some chutney. I thought the soup with 1 tsp of salt and a generous half tsp of smoked paprika was a little too intense but it was more mellow the next day. Not a bad way to use up vegetables on a lazy weekend.Carrot and Potato Fritters
From BBC Australia Good Food August 2009
Serves 4-6

Drain water from grated vegetables. It is easiest to do this by grabbing handfuls and wringing them out like a dishcloth but you could also press them into a sieve. Mix with remaining ingredients except oil. Heat oil in a large frypan over medium heat and fry tablespoons of mixture in batches. The recipe suggests 3-4 minutes each side but I just watched til they were golden (and at times had to go and sit for a few minutes to quell my impatience). Serve with minted yoghurt or chutney.Creamy celery soup
Serves 4