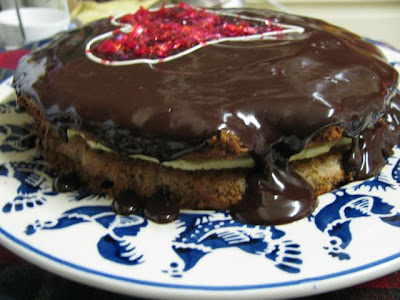 I grew up with a mother who loved to bake sponges. It was her heritage. They appeared on birthdays and often in between. If ever I want a light fluffy sponge that rises sky high I can go home to my mum’s place. Every now and then I feel maybe I should embrace my culinary history and bake a sponge. 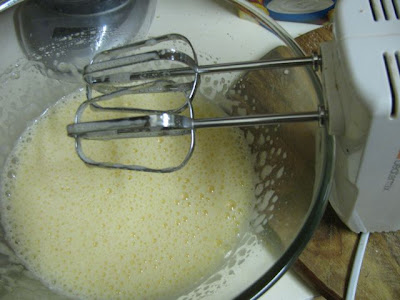 Now let me explain what I mean by a sponge. When I met E he would tell me how much he loved sponge cake. Oh my mum will make you a sponge, I would tell him. But we discovered that his sponge was not my sponge. He is talking about a dense buttery sponge that I might call a butter cake, a pound cake or even a plain cake. My sponge is an airy fluffy cake – a bit like angel food cake – that is lots of eggs, very little flour and no butter or oil. A sponge cake in my childhood was always two layers sandwiched together with whipped cream or lemon filling, iced with white or pink icing that dripped over the sides and often decorated with a ring of hundreds and thousands around the edge. Little kiddie fingers would scoop up the dribbles of icing. Every now and again my mum made me happy by baking one that was chocolate instead of vanilla. 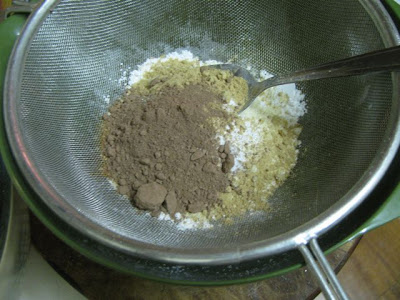 Recently I saw a recipe for a Ginger Fluff Sponge in the weekend papers that interested me. It had golden syrup, a little cocoa and fragrant spices. Much more my sort of thing than a plain vanilla sponge. The measurements in dessertspoons made me feel nostalgic. I decided to try it. The opportunity presented itself on the weekend when E and I had our wedding anniversary. 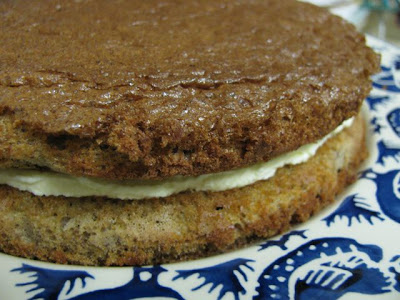 I spent enough time with my mum to know a lot about baking sponges. They have no shortening so even the tin is dusted with flour after greasing to ensure no butter touches the cake. The batter must be handled gently, the flour must be sifted and a metal spoon – not wooden – must be used to fold in the flour. If the flour is not folded in properly you end up with what we called flour bombs. I know that a sponge cake is a challenge with a high degree of difficulty. I made them in high school home economics classes and don’t think I excelled. This is something to be feared. 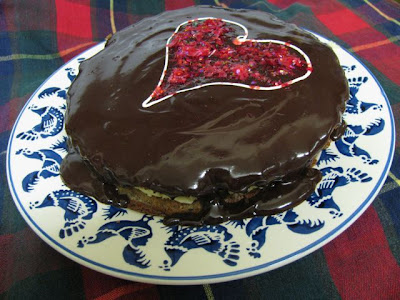 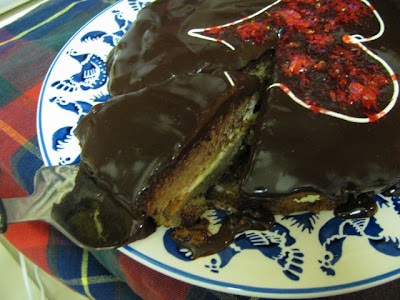 I shouldn’t have been too surprised that it wasn’t a great success. It tasted great but it didn’t rise as it should have. Not like my mum’s sky high marvels. Not even with all my sifting. I am not sure if it was my changes or just my lack of skill. I have noted my changes on the recipe below. Fortunately I had a secret weapon. I covered it with chocolate ganache, which hid a multitude of sins. (Actually I mentioned the sponge to E last night and he said, oh you mean the chocolate one.) I found it strangely moreish. The spices and ganache paired wonderfully. E was most pleased with my efforts. I’d like to tell you that Zinc serenaded us on the guitar while we ate it but life is more mundane. We ate it watching Midsomer Murders on the telly like an old married couple. It is just the sort of thing they might enjoy with a cuppa tea in a ye olde worlde cottage on that show while wondering who is the latest serial killer. 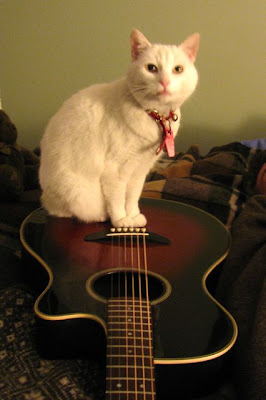 I was congratulating myself on finding a modern twist on a family favourite. But as T S Eliot said, in my beginning is my end. Yesterday I had lunch with my grandmother yesterday and told her I made a sponge. She laughed when I told her it was flat. You should always follow the recipe that your mother and I use, she advised. I told her it was ginger fluff. Oh my mother used to make wonderful ginger fluff sponges, she said. My aunty Liz was in the kitchen and nodded in agreement. I was amazed and delighted to find that my discovery had led me back to my great-grandmother’s kitchen. 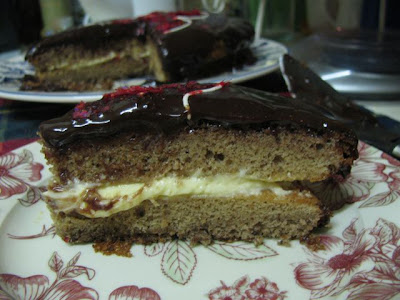 My mother told me that it took her some practice before her sponges rose as spectacularly as they do today. But I am sure they are now a match for her grandmother’s legendary sponges. I remember my mum’s family proudly telling her she made sponges just like her grandmother. Maybe I shall further explore the daunting world of baking sponge cakes. Maybe one day I will make them just like my mum. 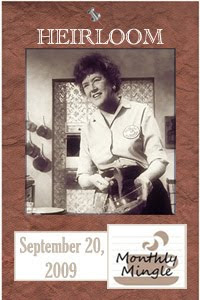 I am sending this post to Bee and Jai of Jugalbandi for September’s Monthly Mingle, because the theme is Heirloom. Ginger fluff sponge
(from Cath Claringbold’s of Thelma Marshall’s recipe in The Age Good Weekend Magazine on 22 August 2009)

Preheat oven to 180 C. Grease and line two 20cm round cake tins (NB the traditional way is to grease with butter and then add a little flour and tap around the tin so it clings to the buttered surface and any loose flour is discarded.)Beat eggs and sugar until pale, thick and creamy. Add golden syrup and beat to incorporate. Sift dry ingredients into a separate bowl and then sift these ingredients into the bowl with the egg mixture. Use a metal spoon to gently fold flour in until just combined.Pour into prepared tins and bake for 15-20 minutes. I think it starts to come away from the sides of the tin when done. Cool in tin for 5-10 minutes. Turn out onto a wire rack to cool.When cake is cool, place one cake, bottom up, on a serving plate. Whip 100ml of the cream with the icing sugar and spread over this cake. Place the other cake on top of the cream. Melt chocolate and cream together in the microwave on medium heat for 1-3 minutes. Pour over cake. Decorate with walnuts, hundreds and thousands, coconut or whatever takes your fancy.On the Stereo:
The smell of knowledge: Lonsai Maikov