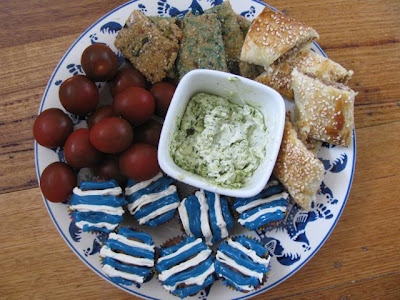 I think I have told you before that my dad loves a dry biscuit with a slice of cheese and cup of tea. So what better way to raise a glass to him as he flies home into Melbourne tonight than with some dry biscuits. He had hoped that his footy team would have won the AFL Grand Final by now, but we all knew that Geelong were stronger contenders (sorry dad) and have a well deserved victory. (Carn the Cats!)

I am not much of an Aussie rules football fan. I once was but these days I don’t take too much notice of the footy. Except that I am a sunshine patriot and like to see my team, Geelong, win. If they lose, like last year, I don’t get too upset. But if they win, like this year, I am delighted. Today I was teaching Sylvia to raise her arms and yell ‘goal’ when they scored (and no she can’t speak but Geelong are a fickle side so who knows when I will have the chance again.) 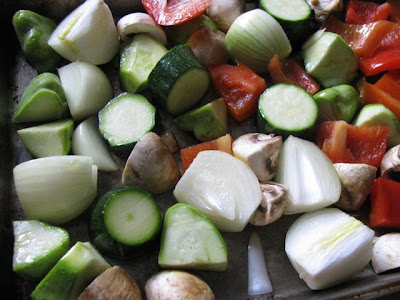 Though not a great football fan, I do enjoy a Grand Final Spectacular. I had promised E I would make sausage rolls, which is traditional footy food (although you might have guessed that the vegetarian version is not usually the choice of most fans). But last year I had waited till afterwards to make the blue and white food if they won. This year I decided I would make blue and white food no matter what. But blue is a difficult colour when it comes to food. I considered blueberries but in the end I turned to food colouring. 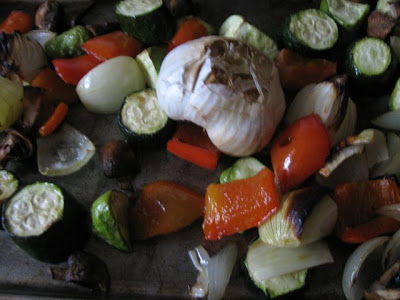 I had a crazy idea that I would make dry biscuits or, as the Americans call them, crackers. The term ‘dry biscuits’ makes me think of dull hard eighteenth century ship food, so is not that appealing, although it is what we grew up with. The term ‘crackers’ makes me think of Woody Allen saying ‘are you crackers?’ Not that alluring either. But maybe I was crackers to want to make blue biscuits. 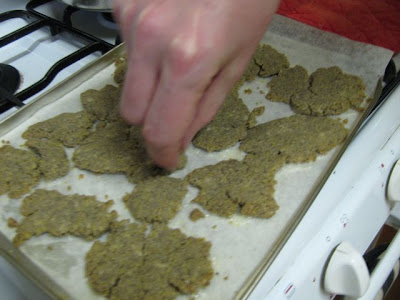 I wasn’t quite sure which recipe to use. I had tried Kalyn’s Almond Cheese Crackers with my purple corn flour a few days previously and they were a dismal failure that looked like maps of obscure European countries. But strangely enough, E liked them. I didn’t have proper almond flour which is a dried version of almond meal (see Clotilde’s helpful explanation of nut flours – she also had some interesting recent cheese crackers) to try the crackers with the proper ingredients. I didn’t have oat flour to try Cindy’s oat herb crackers, nor the food processor power to grind oats.

When I got home from the shops, I saw that Yasmeen had just posted a recipe for Roasted Vegetable Crackers. What an excellent idea to roast vegetables – which I love doing – and blend them with flour and just a little oil! I rustled up enough vegetables from the fridge to roast and made a half-hearted effort of kneading blue dye through half the dough. While the blue was not a success – I just didn’t have the will to use too much dye – the crackers were delicious and full of flavour. I was excited with my creation when E got home and he quite bemused me when he said they were tasteless. Meh to the Grim Eater, I say! 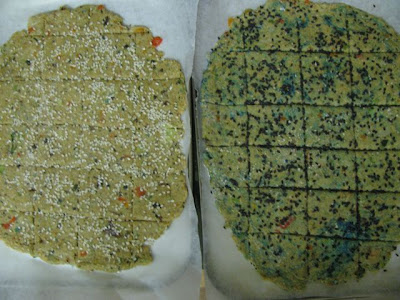 Today while Sylvia played with a wooden spoon and mixing bowl, I made the sausage rolls and mixed some cream cheese with pesto for the crackers. Then I remembered I had some tubes of blue gel and white chocolate for cake decorating and a batch of chocolate honey muffins. I had been looking too hard for ideas for my Geelong baking when it was staring me in the face all along. So I sat watching the opening entertainment by the ‘Hunners’, Barnsey and Farnsey while piping lines on the muffins. How cute are they? (I mean the muffins not the old and hoary rock stars.)

We finally sat down with a platter of sausage rolls and tomato sauce, roasted vegetable crackers, pesto cream cheese and cherry tomatoes. The muffins were saved till half time. E also had some Wicked Elf Pilsner. All the food (and beer) were most pleasing and helped pass the time. E found that the vegie crackers were actually quite tasty and especially good with pesto cream cheese. 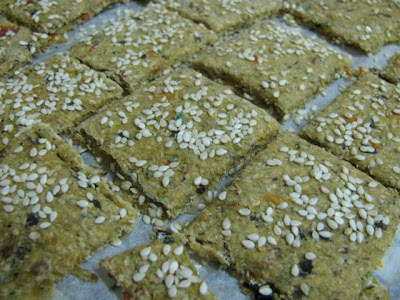 While once I could easily sit through a whole football match, now I find it hard to keep my concentration for that long. This afternoon, after a goal was scored by the opposition (St Kilda) after a Geelong player complained to the umpire I got a little tense and couldn’t bear to see another ‘mongrel kick’. I started playing with Sylvia, taking rubbish to the bin and even invited a neighbour in for a chat.

Suddenly we looked at the television and lots of Geelong players were hugging while the Saints were near tears. We looked at each other and said they must have won. (Either that or it was an amazing goal.) Sylvia practiced her hurrahs while we watched the gracious victory speeches and frenzied celebrations. I thought of those no longer with us who would have loved to see Geelong win - and those who are still with us like my brother Dave who is a die-hard supporter. 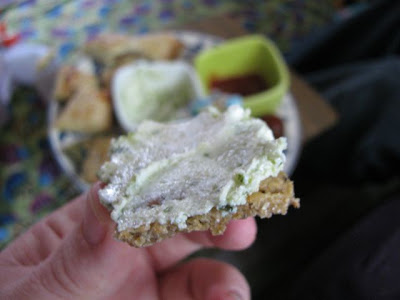 The crackers too are winners. They were rather soft and chewy, especially after a day in an airtight container. More like unleavened bread. Maybe they were not thin enough as I baked them much longer than Yasmeen says (or it could be that I used a few too many veg as I used a few more than Yasmeen). I am still a novice at baking crackers but am quite keen to try more. I hope I will be making more of these because they are a healthy snack to have on hand. But no more blue biscuits.

Place vegetables (except garlic) in roasting tray and toss with olive oil and salt. Chop the top off the garlic, drizzle with a little oil and wrap in foil. Add garlic in foil to the tray of vegetables. Bake at about 220 C for 30-35 minutes until soft. (Yasmeen says to cool but I didn’t.)

Finely chop all vegetables in a food processor (actually mine was more like a puree) and add flour, cayenne pepper and remaining tablespoon of oil. My food processor isn’t too powerful so I needed to tip it into a bowl to use my hands to knead the mixture into a smooth dough. The dough was quite soft and sticky.

Divide the dough in to 2 portions. Lay a piece of baking paper on a flat surface and roll out one portion on the paper to a thin sheet. Use a little extra flour on the rolling pin and the dough to keep it from sticking. Transfer the dough on paper to a baking tray. Yasmeen suggested brushing with a little water and sprinkling with seeds - I didn’t brush with water and my seeds fell off - oops. I also found my seeds fell in the cuts made by the knife so next time I will sprinkle before I make any cuts. Use a sharp knife to cut squares in the dough but leave on the tray as one piece. She also pricked hers with a fork which I forgot to do but will do next time. Repeat with other portion of dough.

Bake at 190 C for 15-25 minutes until they are light brown. Mine were in the oven for 25 minutes and still not crispy but Yasmeen suggests 15-18 minutes and be careful not to let them get too brown. Cool on a wire rack and then cut or break into squares along the knife marks. Great with cream cheese.

On the Stereo:
Works: Pink Floyd