A bloody tale of burritos and beans 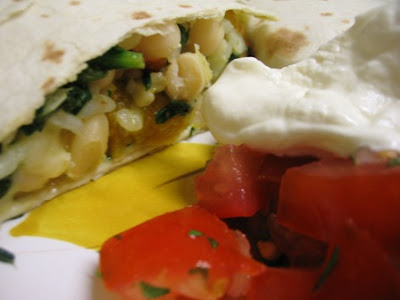 I made burritos last weekend and they had more than their fair share of drama. There was blood. There was a dizzy spell. And there was love.

It started innocently enough with a request for burritos from E. I obliged by hunting out a recipe for Burritos with Spinach, Artichokes, Barbecued Red Bell Pepper and Fetta Cheese from my Complete Vegetarian Barbecue Cookbook. But I felt incapable of following this recipe and followed my own whims. Admittedly I didn’t have much energy for multi-tasking and kept forgetting I was roasting, boiling or frying things.

But it was when the end was in sight that I really lost my concentration. I just had to open a can of beans and toss them into the mix but in my rush I got my thumb caught between the jagged

edge of the tin and the inside of the tin. Ouch! E was chatting away to my dad on the phone and I was yelling at him to get off the phone – now!

Once I managed to extract my thumb it kept bleeding and so we headed off to the bathroom for dettol antiseptic, bandages to soak up the blood and a dizzy moment sitting on the edge of the bath. Thankfully we weren’t expecting guests like last time I did this and the bleeding eased up. But I was a bit shaken as I am not good with blood (it’s no coincidence that I am vegetarian and usually keep blood away from my dinner)! I am sure many fellow food bloggers have their minor dramas in the kitchen like this (although one of my silliest scars is from trying to chop up a Christmas tree for the bin with a carving knife – never again!)

It is times like this I am especially grateful to have E about. Regular readers will know that my partner E doesn’t cook. But he can rise to the occasion when I need him. Under my instruction 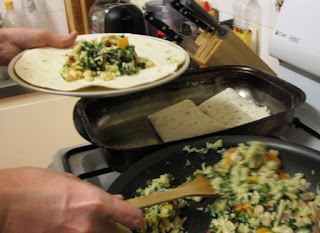 he assembled the burritos. He might have felt all thumbs but I wouldn’t have minded the use of mine. I did manage to take a dodgy photo to prove he really can do it when he needs to. And he still did the dishes! Now that is love!

It was a bit of a relief to sit down and eat the burritos after all the drama. They were lovely and surprisingly filling. One and a half each was too much. In an ideal world I would have served them with avocado or a simple guacamole but didn’t get myself organised to get a ripe avocado. So we had yoghurt and some tomato salsa.

My thumb was not as bad as it felt and looked at first. But I made a salad with beetroot the next day and got beetroot juice in the cut which has made sure it looks quite impressive.

I have tweaked the recipe to serve 6 but if your household is small like ours you might want to just serve 2 or 3 and be creative with the remaining filling and tortillas. I used the remaining filling for stuffing zucchinis – more about that later. My leftover tortillas were used for cheese and banana burritos which were interesting but not quite blogworthy (maybe another time).

I feel I should learn from this experience. It is yet another reason that tinned beans aren’t necessarily better and that I should get myself organised to soak and simmer the dried stuff. However, Lucy of Nourish Me doesn’t mind how I cook my beans. She is requesting leguminous dishes for My Legume Love Affair which she is hosting this month (deadline 28 September). So I am sending these burritos to her for the event which was started by Susan of The Well-Seasoned Cook.

Peel, deseed and chop pumpkin. Toss with drizzle of olive oil and seasoning in a roasting dish. Roast in 200 C oven for 30-40 minutes or until soft and cooked.

Cook rice in boiling water for about 12 minutes or til cooked. Drain.

Make salsa by mixing ¼ of the red onion, ½ chilli, 1 clove of garlic, juice of lime, salt and tomatoes in a small bowl. Set aside.

Fry remainder of red onion in large non stick frypan in about 1 tsp of olive oil for about 5 minutes. Add 1 clove garlic and baby spinach and fry about 2 minutes or until spinach begins to wilt. Stir in artichokes, sun dried tomatoes, lime zest, cheese, beans, roast pumpkin and rice til all combined.

Divide the mixture between tortillas and fold over four edges of each tortilla to make an envelope that will encase mixture. Place in lightly greased roasting dish seam side down and cover with foil. Bake at 180 C for about 15 minutes. (Or cook under the grill or on a frypan til lightly browned). Serve with salsa and yoghurt and/or guacamole.

On the Stereo:
Ultra-Lounge / Tiki Sampler – Various Artists
Posted by Johanna GGG at 22:25