In Search of the Green Smoothie 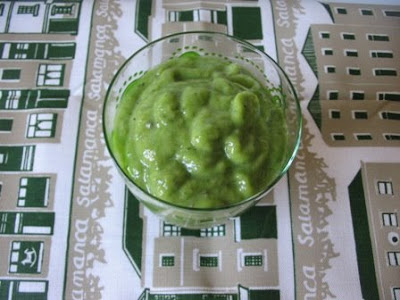 After some experimentation I finally arrived at a green smoothie to love this morning. Just the thing to cope with E playing samples of cats singing Christmas carols on the web (I kid you not - meowy christmas anyone?). 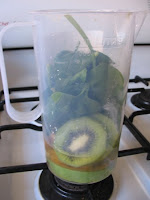 morning – thanks to finally finding the right jug for my stick blender. But early this year before I found that perfect jug, I began to dream of a green smoothie. It started when Ricki posted her mystery smoothie with spinach in it. All I could think was ‘mmm…green’ despite her suggestion that you hide the green with other colours.

We have a book of Juices and Smoothies which I consulted for more ideas on green. There seems nothing that can't be put in a smoothie but I was after taste as well as colour. While I draw the line at cabbage, brussels sprouts and cucumber, I was tempted by broccoli. But it was kiwi fruit that lodged itself in my imagination. My smoothie had to have kiwi fruit. 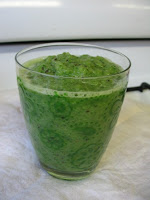 Then I saw Holler’s Raspberry Carrot and Basil Smoothie which had blended apples rather than apple juice. So my first attempt at a smoothie was kiwi fruit, spinach and grated apples. It was a brilliant green, tasted quite nice but was too slushy for my liking. So I tried a variation of my favourite smoothie – kiwi fruit, banana and apple juice. Tasted great but was a disappointingly pale green.

Lately there have been a few interesting posts with lots of good suggestions for finding your way out of the smoothie rut. Check out the ideas and comments on posts by Cassie, Clotilde and Sophie if you would like some novel ideas. My smoothie rut is that I like to add banana for

creaminess. Then I saw Sophie’s suggestion of using avocado and my mind saw the green possibilities.

My challenge with avocados is finding one that is ripe at the same time you want to eat it. I bought a ripe one yesterday but had too much other good food about to have room for smoothies. So this morning I tried my smoothie with kiwi fruit, avocado, apple juice and spinach. I initially only put in half a cup of juice but the avocado really does thicken it up, so I added more juice and the smoothie I drank was a little thinner than the photo shows (yes my photo is on a new teatowel from my recent Hobart trip). But it tasted so good and was such a pleasing colour. 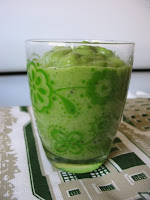 I highly recommend this smoothie if you want green colour and good taste. It is not overly sweet but was sweet enough for me. I am won over by kiwi fruit in smoothies – they are both sweet and tart and I love the texture of the seeds in the smoothie. The avocado makes it amazingly smooth and thick. The spinach is not noticeable but adds a bit of iron which I can always do with. And the apple juice thins it down and adds that extra sweetness that it needs. Lastly, it is very filling. I feel like I don’t need to eat again today. But my excuse for drinking it all is that it needed to be had fresh and E wouldn’t even try it. His loss!

Place all ingredients in blender or use hand held blender and blend till smooth. Add more apple juice if you need to thin it down a little.

On the Stereo:
Cara Dillon: Cara Dillon
Posted by Johanna GGG at 13:05