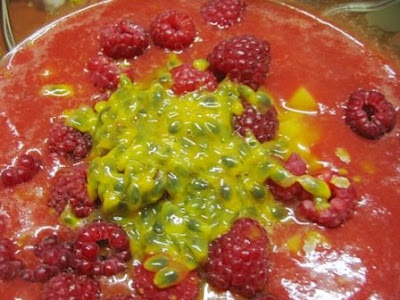 E and I celebrated our wedding anniversary last weekend. Having spent more than enough time eating out in Hobart until a few days before, both of us fancied a special dinner at home.

It was a perfect spring day. The mercury reached a pleasant 23 C. The warmth of the sun was welcome after a chilly Melbourne winter. After huddling inside by the heater for months we sat with the weekend newspaper in the backyard much to the delight of Zinc our cat. Even our struggling lime tree was proudly displaying new growth. Just the sort of day that inspires me to buy a loaf of excellent Sugardough bread, a bundle of nice vegies and head home to make fresh salad sandwiches to eat in the sunny backyard with Zinc sunworshipping nearby. Dinner was planned to reflect this fine weather.

I was glad of the leftover filling from my burritos the previous night. This made dinner that little bit easier. I halved and scooped out two medium zucchini and stuffed them with the filling and 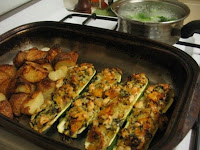 baked them about 30-40 minutes. I served these with roast potatoes, spring vegetables (broccoli, peas and asparagus) and a simple avocado sauce. Delicious!

But it was the soup that was to be the piece de resistance. When Holler and Lisa announced that the theme for their No Croutons Required event in September was to be fruit in a soup or salad, I decided to dig out a recipe for Strawberry Soup I had scribbled down in the library months ago. I’ve wanted to make a fruit soup for some time but never like the idea of tapioca or cornstarch in these soups and was attracted to this soup because it had neither. Even better, it had many of my favourite summer fruits.

Making this soup at the start of spring meant that much of the fruit in the recipe has not yet come into season … sigh! So I went to my favourite green grocer in Carlton where I was able to 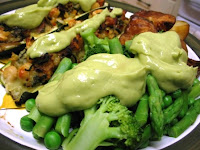 purchase Australian strawberries, raspberries and passionfruit. A fresh nectarine was a bigger challenge at this time of year, so I opened a tin of unsweetened peaches which had been loitering in the pantry.

The recipe called for marscapone but I have been intrigued by Ricki’s Chilled Peach Soup with Cashew Coconut Cream. Full of confidence I tried to make a simple cashew cream. The result was a horrid sweet watery substance with ground cashews in it. It was so disgusting I threw it out. I think my food processor let me down by not incorporating the cashews into the liquid properly. Maybe another time I will try it with cashew nut butter and see if that is any more successful. Or maybe I am just not meant to enjoy cashew cream any more than I enjoy any milk whether it comes from a cow or a soy bean.

So by the time my cashew cream failed I had no marscapone on hand. Nor did I remember to get mint for the soup. So what I had was pureed strawberries, fruit and a little sugar. As a lover of smoothies, I found it wonderful – velvety, refreshing and cleansing. Simon Rimmer in The Accidental Vegetarian describes it as ‘like a good snog’. The addition of passionfruit is a stroke of genius for the contrasts of its tart flavour and seedy texture against the smooth sweetness of the soup. In fact it was so good I even considered the possibility of pureeing the whole lot and 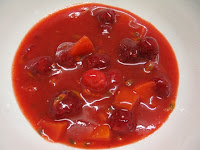 serving it as a smoothie.

E doesn’t like smoothies. He doesn’t like chilled soup. He is not that keen on fruit. So I shouldn’t have been surprised that he wasn’t at all keen on the soup. In fact, I happily ate most of his. Bit of a shame on our wedding anniversary but I know he loved the first course. Besides he has his little pleasures. He got to choose the music! He also got some enjoyment from discussion of how much it looked like an alien lifeform in a sci-fi movie! So I don't think he really missed out. But maybe there will be a dessert for E coming up soon.

Even if E is not a fan, I hope to try this soup again before autumn blows around again. I can think of others who would love this soup. It would be fantastic in the height of summer which will be with us all too soon. In the blogosphere, I am sure Holler and Lisa will love it and send it their way for No Croutons Required.

Blend strawberries and sieve (discard seeds). Mix puree with remaining ingredients. Chill until ready to serve. Serve with marscapone and mint leaves or serve as is. Tastes great the next day too.

On the Stereo:
With my little ukulele in my hand: Various Artists
Posted by Johanna GGG at 17:26