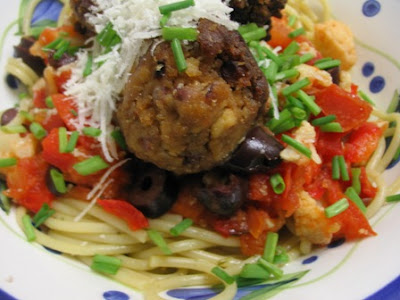 We sang this song with great gusto at primary school. It was sung to the tune of On Top of Old Snowy. Imagine a class of little kids yelling out the last line with more concern for loudness than tune. That was my class.

This seems like a song of simpler times when our main concerns were hygiene. Lactose-free and 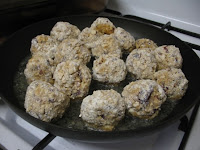 gluten-free diets were virtually unheard of. I can’t remember anyone being vegetarian or vegan at the time. Though, I might have quite happily taken up a vegetarian diet to avoid having to eat meat if I had thought it possible.

More recently when I saw Cindy making soy bombs, I was amused by the name and enticed by her enthusiasm for them. I subsequently saw Frances and AOF enjoy versions of them. I noticed that Frances used egg to bind them and I understand because mine were on the crumbly side and one or two collapsed in the frypan. While they seemed fine finger food for entertaining, I fancied serving them on top of spaghetti and this song kept running through my mind. Try singing it with soy bomb instead of meatball - it works! 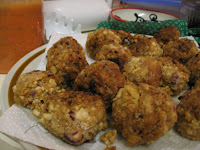 If I was going to serve them on spaghetti, I also needed a sauce to serve with them. I found a recipe for a roasted tomato sauce from Cranks Fast Food (by Nadine Abenseur) that I had scribbled down months ago and decided to try it. Its simplicity attracted me.

Although I had notes to say the tomato sauce served 2 people, I think it would easily serve four. The sauce was delicious but the spaghetti was a little drowned under the generous helping. The soy balls had great flavour and texture but a little went a long way. I served some broccoli on the side which was just as well because otherwise dinner would have been a bit intense. 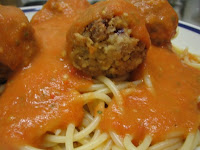 cheese’. More respectful to the vegan nature of the soy bombs but this song had given me visions that were not realised.

A couple of nights later we still had lots of soy bombs left and it was the day before I headed off to Hobart and needed to empty the fridge. I emptied the fridge and made another roasted tomato sauce that I loved. I enjoyed it more because it had more variety of vegetables and hence more flavour. But it was every bit as simple as the previous sauce, even easier because there was no pureeing. I even had some sauce and a soy ball leftover for a small meal the following night before heading off into the world of airplane catering. When will airlines learn that food can taste this good!

I am sending this post to Psychgrad of Equal Opportunity Kitchen who is hosting this week’s Presto Pasta Nights, the event which was started by Ruth of Once Upon a Feast.

Soy Bombs
(adapted from Post Punk Kitchen via Where’s the Beef?)
Makes about 18 balls – enough for 6 servings with pasta

Mix all ingredients (except flour and oil). Roll into balls of about 3cm diameter (I found mine a little on the crumbly side). Place flour in a bowl and toss balls in flour to coat.

Pour oil into a non-stick frypan (about 2mm deep) and heat to not quite smoking. Try one soy bomb and if it sizzles add the remaining bombs (if not heat the oil more). Turn with tongs after a minute or two and then turn fairly frequently til browned all over. Mine absorbed most of the oil. Drain on kitchen paper.

Alternately you can bake the soy bombs for 20-30 minutes but according to Cindy’s partner in the kitchen, Michael, they will be drier.

Serve with spaghetti and tomato sauce (see recipes below) or as finger food.

Place all ingredients except basil or pesto in a roasting dish. Roast at 230 C for about 20 minutes. Blend and stir in basil or pesto. Serve over pasta.

Toss tomatoes, cauliflower, capsicum, and garlic with salt and a drizzle of oil. Roast for 40 minutes in oven at 220 C. Stir in olives. Serve on pasta, scatter with cheese and chives.

On the Stereo:
Exodus: Bob Marley
Posted by Johanna GGG at 18:08