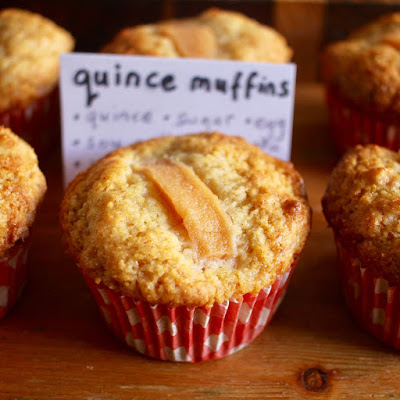 My mum gave me some quinces a couple of weeks ago.  I love quinces but they lingered for far too long.  I have just been too busy for them.  (Busy times which mean less time for baking or blogging.)  But when the school holds a cake sale for today's federal election, it is great to have an incentive to bake with the quinces. 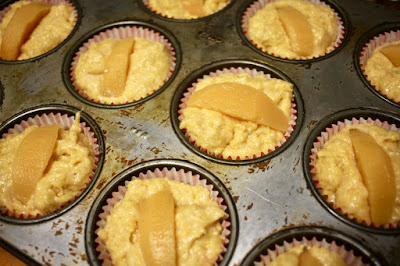 I found a quince muffin recipe on a blog called In Erika's Kitchen. The idea of baking the muffins with strips of quince on top was just what I needed.  Muffins can be pretty ugly.  Not only did the strips of quince make the muffins look prettier but they also make it clearer to punters what they are buying.  I added some polenta which also gave the muffins a slight grittiness.  However they were rather good. 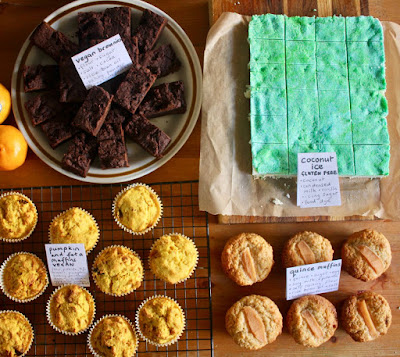 And we didn't just bake quince muffins.  Sylvia made coconut ice last night with a very nice teal layer.  I baked vegan brownies which were a bit less moist than last time but still nice and dense.  This morning I made some pumpkin muffins and will write about these soon. 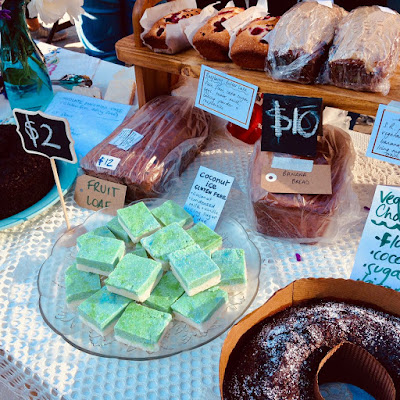 We headed to the school to vote early (for us) at 9am with lots of cakes in hand so that we didn't have empty hands for all the how to vote cards.  I still arrived at the school gate with a clutch of how to vote cards.  The prize for the best was the Independents for Climate Action Now with their scorecard on parties and climate change which used emojis for how well they were doing. 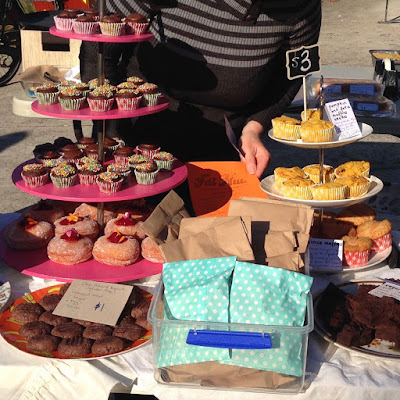 We dropped off cakes at the cakestall.  Then headed into vote.  I queued for over 30 minutes.  Thank goodness for the sunshine.  And I was also thankful for fresh home made doughnuts with raspberry coulis and pretty flowers.  They were so good and some comfort after confronting a senate voting slip with 81 candidates on it that seemed to go forever. 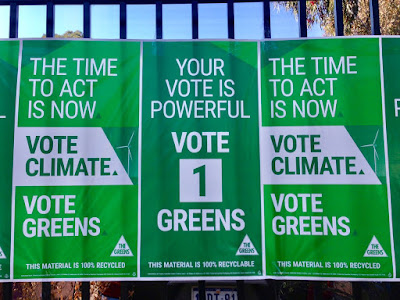 Our electorate is changing along with other inner city seats.  While it used to be a safe Labour seat, it now is less certain thanks to the challenge from the Greens.  A bit of competition means that politicians are kept on their toes and actually woo voters rather than taking them for granted.  Politics is a bit like the chocolate toss where Sylvia and I spent an hour overseeing this fundraising game of trying to toss a gold coin onto a chocolate bar - it is much harder than it sounds. 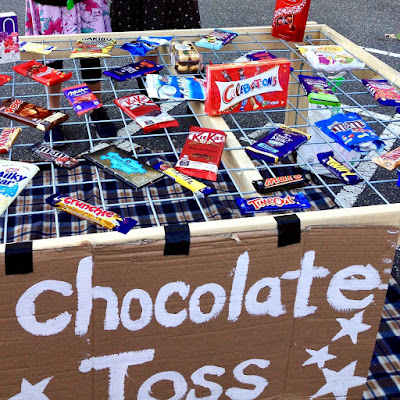 As I watch the election results, we see that politics is a complicated game.  The opinion polls that found Labour to be the victor in the election are being proven wrong.  However every time I watch an election on tv I find it bemusing to see how they crunch the numbers.  I have always been more a qualitative than quantitative person and still want a nation of compassion rather than wealth.  I fear that compassion is not the winner in this election. 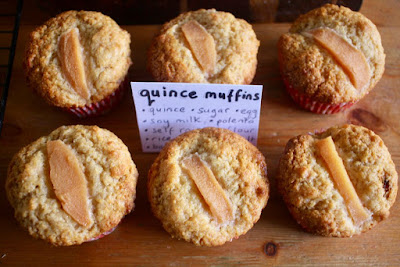 And so back to the quince muffins.  They seemed to be selling when I left.  They are quite traditional sort of muffins with a slight polenta/quince texture, a hint of spice and a fruit topping.  These are just the sort of thing to pop in the lunchbox but could have enough style for an afternoon tea or just comfort eating in the face of an election loss.

Mix wet and dry ingredients in separate bowls.  Combine until just mixed.  Spoon into paper cups in a 12 cup muffin tin, only about a third to a quarter full.  Push a slice of poached quince into each muffin.  Bake at 180 C for 25 minutes until golden brown and a skewer inserted comes out clean.  Cool on a wire rack and store in an airtight container.

Peel, trim and quarter quinces.  Cut each quarter into 3 or 4 slices.  Cover with water.  Push cloves into lemon quarters.  Place the lemon quarters, cinnamon stick and sugar.  Stir.  Bring to boil and simmer (covered) for about 5 to 10 minutes until quinces are soft.  Cool.

NOTES: You could puree the quinces rather than mashing if you prefer.  I found it easier to mash well with a fork.  For a less gritty texture, substitute flour for polenta.  Once you put the batter into the paper cups, it will get more full once you press the quince slices on top so do not fill too much.  If you don't have self raising flour substitute 1 1/2 cups plain flour and 3 tsp baking powder.  I had 5 quinces so I didn't use all of them for the muffins.  I think 3 quinces is closer to what you need.  Put aside 12 nicely shaped quince slices before mashing or pureeing.  When previously poaching quinces, I have used more sugar (eg 800g for 3 quinces) but decided to follow with less sugar in the Figs and Pigs recipe.  It was less syrupy but kept the quinces fine for days.

On the Stereo:
Greatest Hits: Elton John
Posted by Johanna GGG at 23:29