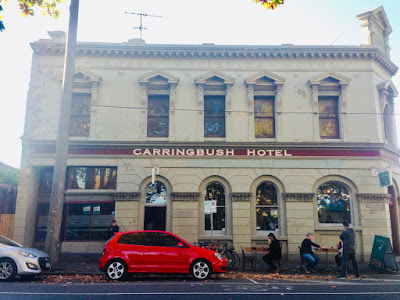 After I saw Cindy and Michael recommend the Carringbush Hotel, it wasn't long until we visited for lunch.  The pub promised a vegetarian menu with promising kids meals and an intriguing name.  My family, like many with Collingwood connections going back a few generations, has connections with Frank Hardy's Power without Glory.  Anyone with such a history might feel a prick of interest in a pub named after the fictitious suburb from the novel which was easily recognisable as Collingwood. 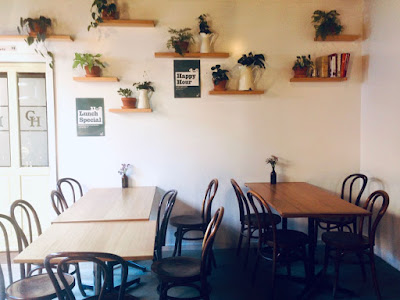 We visited last weekend for a late lunch.  It was the lull between the end of lunch and the start of the evening crowd.  Even then there was a decent scattering of punters.  The building dates back to 1889.  It has been modernised to let in light without whitewashing out its historic charm.  It retains the exposed red brick walls, a faded painted advertisement in the beer garden and the bar faces into the street through gorgeous arched windows. 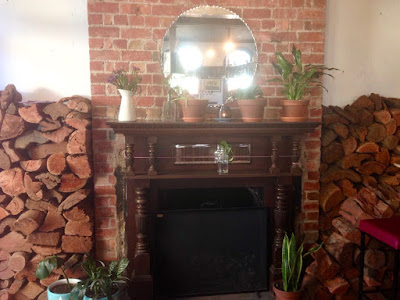 And there are fireplaces.  I counted three but am not sure there weren't one or two others in some nook or cranny.   The above fireplace with so much wood stacked either side looks like it is frequently used.  As we left I noticed another fireplace had a fire in it.  The crowds were building and the pub looked so welcoming and cosy. 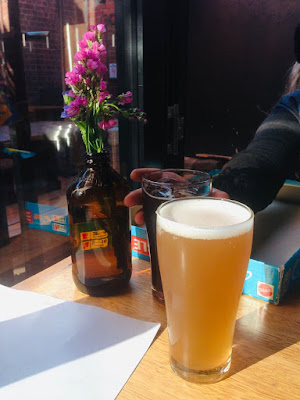 Our first move was to head to the bar for a drink and to order our meal.  When we bought drinks I asked what non-alcoholic drinks were available.  (The Carringbush apparently has a great selection of craft beers if that is your thing.)  I was delighted to hear they have kombucha on tap.  Oh joy!  And it had a tropical flavour.  I was told that they rotated different flavours but only had one kombucha tap.  There was also an unnamed mocktail on the drinks menu but I forgot to ask what it was. 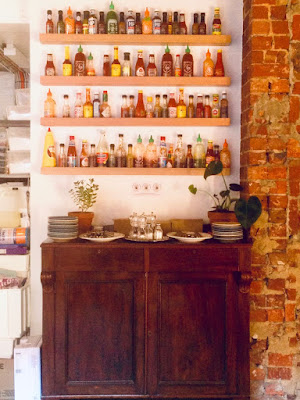 A sign of a modern pub is an extensive collection of hot sauces.  The Carringbush's four  shelves of sauces is rather impressive and seemed to include quite a bit of heat.  We also found some games on the mantlepiece near our seat.  Sylvia selected junior scrabble.  And there was the vegetarian menu too with decent offerings of vegan and gluten free items. 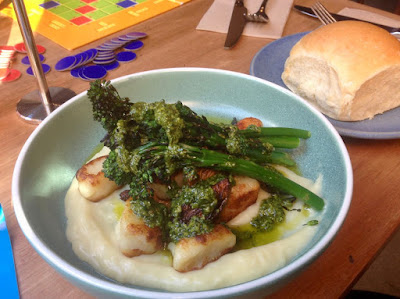 I had been excited to see Cindy's meal of battered cauliflower with chips but it was off the menu during our visit.  I was tempted by the maple teriyaki tofu with sushi rice and onion broth, and by the pie with mash and mushy peas.  The salads also looked nicely substantial for a summer's meal.

After some swithering, I ordered the vegan Housemade gnocchi with parsnip puree, chilli parsley pesto, brussel sprouts and broccolini, served with a potato bun. ($22)  I cannot speak highly enough of this dish.  There was enough gnocchi without being stodgy.  The parsnip puree and pesto worked really well as a substantial creamy but not heavy sauce.  And the dish had plenty of green vegetables.  All with lots of great flavours and not too spicy. 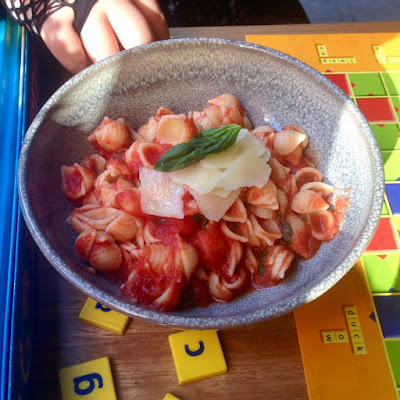 Sylvia eyed off my accompanying potato bun greedily.  I shared it with her.  It was incredibly fresh and so fluffy and soft with a thin crackly crust.  Sylvia was very pleased to have the pasta shells with tomato, basil and cheese ($9) from the kids menu.  She really loved it, though was distracted by the scrabble and took her time to eat it.

I was a little disappointed she did not order the cauliflower nuggets with chips from the kids menu.  I think if it had just said vegetarian nuggets she might have been more willing to try.  As an adult I am fascinated that they are made with cauliflower but kids just have less of the adventurous spirit. 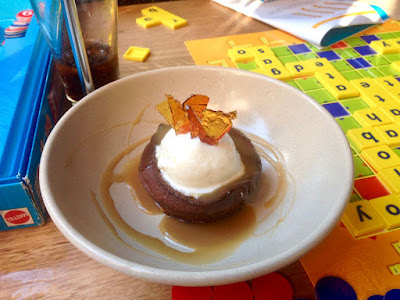 For dessert we had the oddly named "Chocolate stout black forest cake with vanilla ice cream, butterscotch sauce". ($12.50)  I think they might have forgot to deleted "black forest" after they changed the cassis syrup to butterscotch.  The toffee shards on top looked like butterflies.  I shared this with Sylvia rather than her having the scoop of ice cream and sprinkles from the kids menu.  She ate most of the ice cream.  The cake was quite rich and had some stout in the floavour so I could have done with a bit more of the ice cream but that was not the pub's fault I gave most of it away.  Other than that it was a nice rich dessert. It was neither vegan or GF but the apple crumble is both. 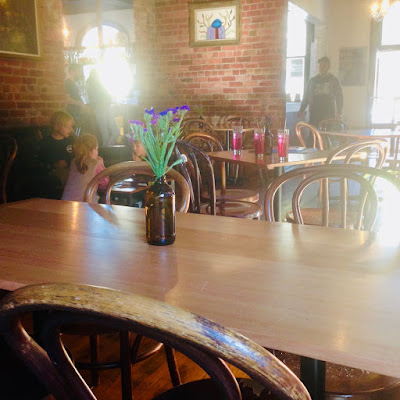 One odd thing about our seat was that every now and again the lights dimmed.  Or so it seemed.  After this happened a few times we realised the sun was lighting up the table from above the beer garden.  And at the top of the beer garden is the railway line.  When a train came past it blotted out the bright sunlight.  The dimmed light was odd but I enjoyed looking up at the top of the wall and watching trains go by. 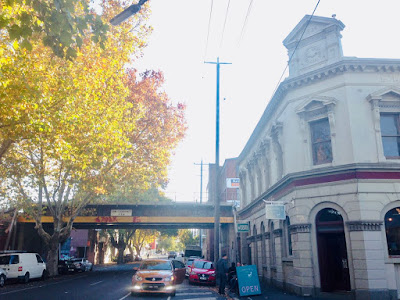 I really loved our lunch at the Carringbush.  Staff were friendly and helpful.  My main course gnocchi dish was amazing.  The interior had lots of really welcoming spaces.  We really enjoyed whiling away a couple of hours with good food and the scrabble game.  If only we lived closer we would be regulars.  And I wonder did my great grandfather and family ever visit and what might they think of it today.