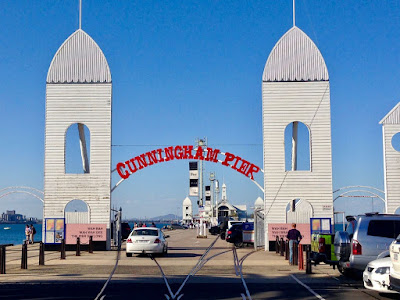 A couple of weekend ago we had a family birthday dinner at Wah Wah Gee in Geelong with my parents, siblings and niblings.  Wah Wah Gee has loads of space, a huge menu, and caters well to different dietary requirements.  I really love a place with mocktails, and the dishes just seemed to keep coming with lots of delicious dumplings and vegetables.  We were so full by the time we left. 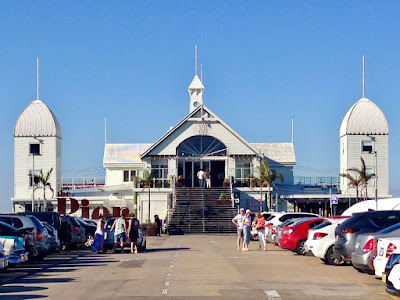 Firstly let me tell you that I am trying to stop myself typing Wah Wah Nee, the 1980s band best remembered for their big hair, whom I assume inspired the name of this restaurant, but please forgive any typos.  Wah Wah Gee is at the end of Cunningham Pier in Geelong, where the old train tracks speak of its industrial past. 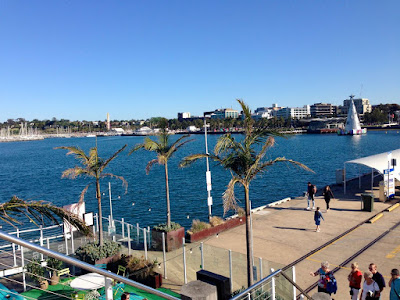 Being on the piers, the views are spectacular.  Not being locals, we firstly went upstairs to the Wah Bah (not realising there were two different Wah places) and had to be waved down to the lower entrance by my sister.  It did give us a great view of the Geelong waterfront including the Christmas tree in the top right of the above photo. 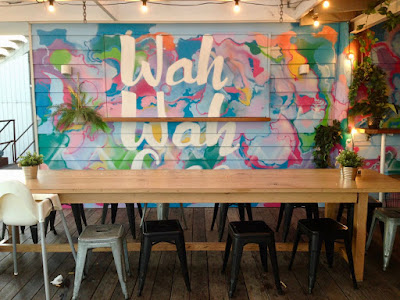 Wah Wah Gee had quite a few different sort of spaces.  I liked this area outside (above) with the painted wall and hanging seats (not in photo).  The restaurant will happily fit a few large groups. 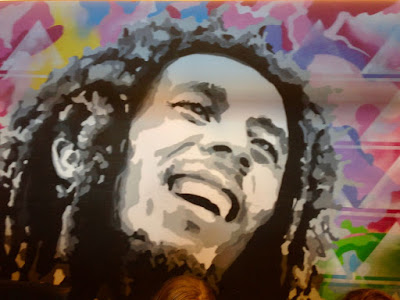 We sat at a large table inside under a giant picture of Bob Marley.  To get a sense of how large it was, you can see the top of Sylvia's heard just under his chin above. 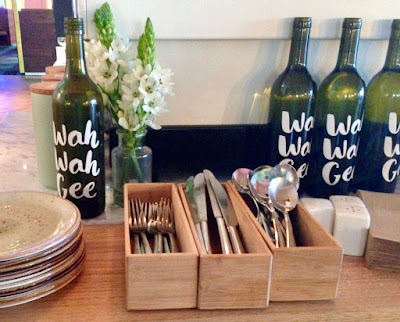 The staff were very accommodating, albeit a bit slow at times because the place was busy.  We booked for 14 and ended up with 17 so we got more knifes and forks and squished in more chairs. 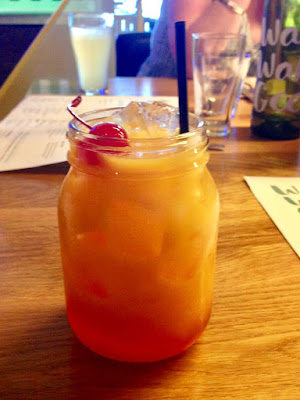 We started with drinks and I was delighted to find mocktails on the drinks menu.  My nephew ordered the Hot Like a Sunrise.  It had orange, cherry and lemonade in it.  There was a little red down the bottom but my angle wasn't right to feature it.  I didn't taste it but he enjoyed it. 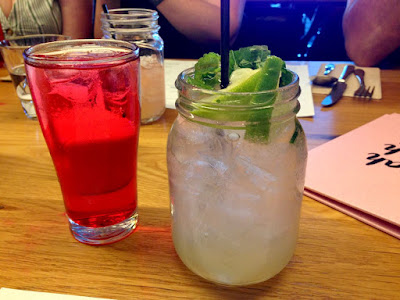 I chose the Ginger Delights, which was quite similar to a Virgin Mojito.  With ginger beer, soda, mint and fresh lime, it was lovely and refreshing.  Sylvia had a raspberry lemonade. 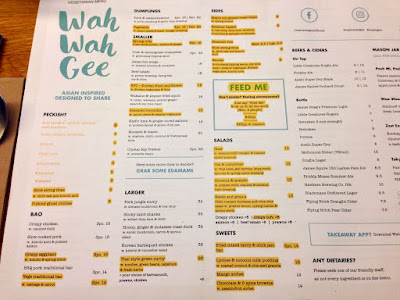 Then we had the difficult task of ordering for 17 people, some of whom had not arrived, with celiacs and vegetarians among us.  We ordered 4 of the Feed Me meals, one of them vegetarian and I think one of them gluten free.  Then we ordered some more dishes.  In the chaos of dish after dish arriving on our table, it was a bit confusing trying to work out what came as Feed Me dishes and what was ordered separately.

Wah Wah Nee has a large menu and then has different dietary versions.  I got the vegetarian menu, so all the yellow highlights were vegetarian.  (You can see other dietary menus online.)  I found it an odd way to do the menu if you have some different dietary requirements in the group.  I could see what was vegetarian but could not see if my celiac sister could also order it.  I much prefer a v or gf after the menu item.  But kudos for all the options for those with dietary restrictions. 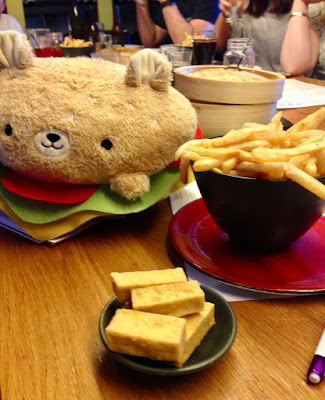 We had a long long wait for any food to arrive.  The kids were starting to get ratty.  Sylvia was asking me to ask the waitress when.  Finally she had her edamame.  Then her shoestring fries.  I didn't realise til the end of the dinner it has chilli salt.  The kimchi aioli, however, was universally rejected by the kids in favour of tomato sauce.  Sylvia also had some crispy tofu.  I had expected more of a batter but Sylvia enjoyed it and said it was crispy. 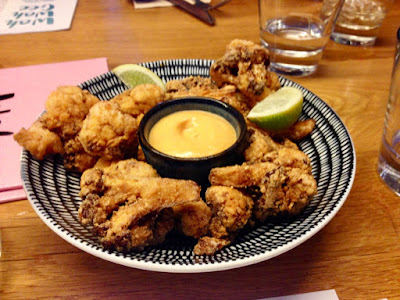 Finally our food arrived.  This KFC (Korean Fried Cauliflower) with Korean veganaise and lime was really really good.  My mum wanted us to save some for my brother who was off picking up my niece and it was so hard to let it sit there.  It is really nicely seasoned and crispy without tasting ridiculously salty and overseasoned like the Colonel's secret herbs and spices do.  (Seems I will never be able to forget the taste of Kenchuky Fried Chicken.)  It was also really easy to eat with fingers. 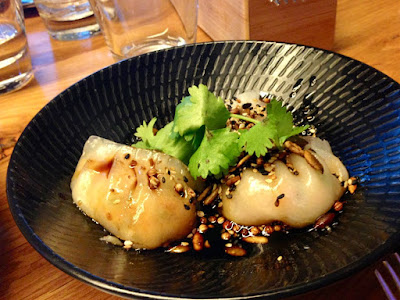 The vegetable dumplings with amino seeds and black vinegar dressing were not finger food.  We needed cutlery for these soft slippery drippy dumplings.  They were delicious.  I really loved the seeds on top.  My 6 year old niece ate the coriander! 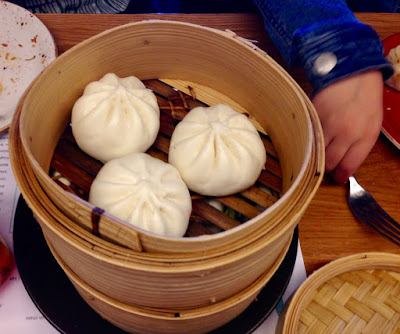 Wah Wah Gee loves their bao.  Everyone else had bao that was like a piece of bao folded around the filling.  There were two vegetarian bao and I think we had the vegetarian traditional bao with cabbage and carrot.  (I feel a little sad we didn't get the one with crispy eggplant, kimchi and spring onion.  However I am not a huge Bao fan.  It seems very trendy but perhaps I am still waiting for the bao with amazing vegetarian filling to really appreciate it.)

This was the end of the starters and we were pretty full by now.  Then they cleared out plates, brought out bowls of rice, some roti, a fish curry and some great sides 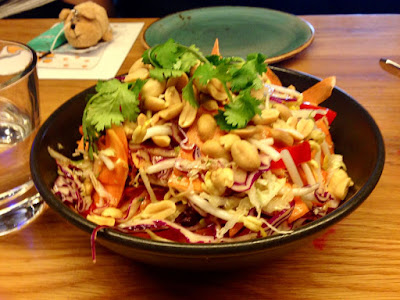 I was really pleased I had ordered the Slaw with sesame chilli vinegar and toasted salted peanuts.  There wasn't heaps of protein for me so the peanuts went down well for nutrition as well as taste.  I had a few helpings. 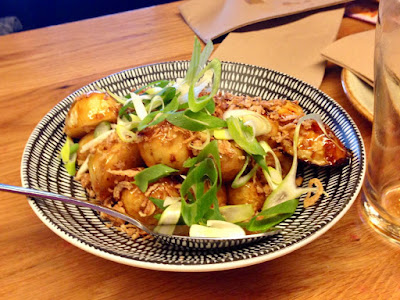 Last but by no means least was this delicious Maple soy glazed roast chats with spring onion
fried shallots on top.  Soy and maple syrup is something I might put together at home but not a flavour combination I am familiar with in restaurants.  It was amazing.  Roast potatoes in a salty sweet sticky glaze with crispy fried shallots on top.  There was no vegetarian curry but I was quite content with these side dishes. 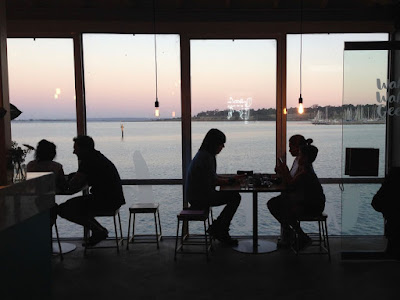 And then it was the end of the night.  The sun had set outside the huge windows and we were ready to drive home to Melbourne.  Sylvia and I walked along the pier to the car and could not resist visiting the Christmas tree on the way.  I was really pleased to have been to Wah Wah Gee with a large group so I could taste lots of dishes.  This is the sort of fusion Asian food that Australia does well.  There are still more dishes I would love to try so maybe I will get to return one day.