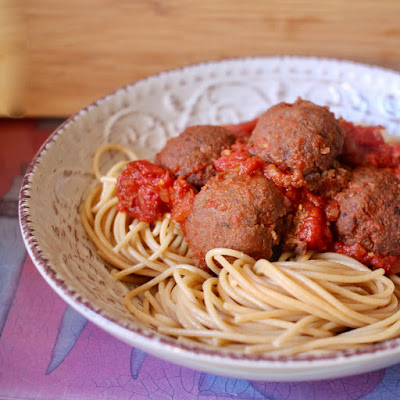 I miss the blogging scene I encountered when I started over 11 years ago.  Sharing what we did, exchanging recipes and laughing at ourselves.  It was a time of learning, generosity and blurry photos.  We learnt on the run about design, photography, ethics, sponsorship and other stuff that these days seems second nature to a new blogger.  These days it is harder to post until a recipe is right, the photos are right and might be ok for FoodGawker.

However I still enjoy a rambling post about how dishes evolve and morph in rhythm with my life.  I sometimes like to share recipes I will never make again because they hold a gem of an idea I will return to.  So here are some patties that developed into "meatballs" in an unexpected ways resulting in some delicious dinners and lessons about what not to do.  Read along if you like to know about people's cooking and lives.  Go to another blog if you just want the perfect recipe! 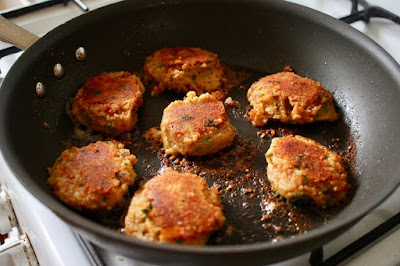 Let's start with my first mistake.  I took my recipe from the Coles Magazine which had a lentil tarka dal mix and I decided to just guess how many lentils this would be.  And I was way off the mark.  The mashed potato was swamped and I had a ridiculously huge amount of mixture.  I halved it and seasoned one half for patties.

Digression: I have a particular dislike for recipes with processed ingredients.  It is hard to substitute for them. and at times like these to even know what is in them. I had intended these patties to be heavy on the mashed potato because Sylvia is suddenly in love with everything potato (her Christmas present list includes mashed potato, steamed potato ad roast potato!  Easy to get her presents this year!) 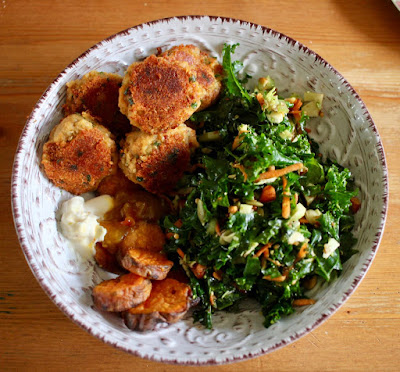 The patties were nice but they were so fragile that I wasn't keen on frying them.  I tried some on the stovetop and some under the grill (broiler).  Both were so soft that it didn't take much for them to lose their shape.  However I made the mixture on a Sunday when I also made roasted sweet potatoes and kale and broccoli salad.  So it was easy to fry them up after work and serve with sides.

Digression.  Some days it is great to rush home and have dinner ready because I am so tired.  Other days it is so nice to have leftovers as there is so much else to be done.  I also fried up some patties after taking Sylvia to gymnastics where she was really switched on and I had a walk to a cafe where I sat with my book for a while and felt like a parched woman the way I greedily drank in the moment to rest.  Having dinner just about ready afterwards was the icing on the cake of a lovely afternoon. 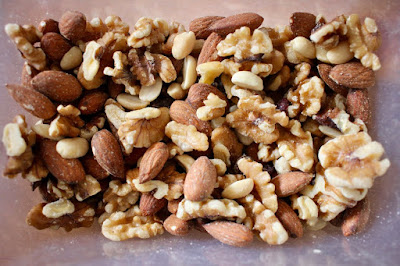 Enter the nuts!  My mum had given me some mixture nuts a while back.  They were a lot of walnuts and almonds with some peanuts hidden throughout.  Usually I don't cook with peanuts because Sylvia is allergic.  I made the exception to her horror with these.  And I was careful to wash up and keep dishes separate. 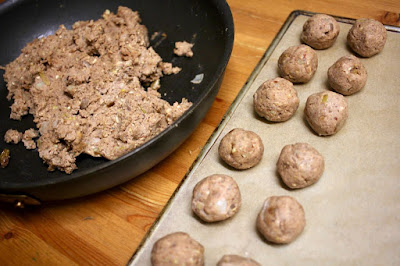 I blended the nuts and added them to the second half of the lentil-potato mixture with some seasoning.  They were better but still a wee bit soft.  I thought the mixture actually looked like cooked mince meat.  Walnuts are brilliant at substituting for mince meat, which as a staple of my childhood.

Digression: Lately I have heard a few people having a go at vegetarians about using meat terms.  Damned if we want anything to do with meat and damned if we don't.  The reality is that meat is still part of the culture and can hold great nostalgia even for me who grew up disliking meat.  And I read a great article about how meat culture has changed a lot and no one expects that people eat like their ancestors a few generations ago.  So please, ominvores, have a little sensitivity towards vegetarians just like you expect us to be understanding of you eating meat! 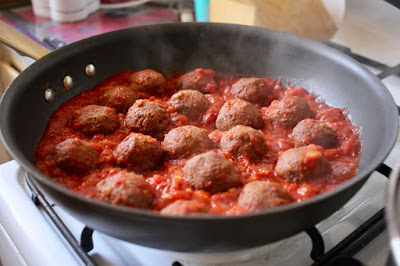 On the Thursday I cooked these as "meatballs" in tomato sauce.  I dipped them in the sauce and then turned them over to sit in it so they were fully covered.  I served these with spaghetti and it was most satisfying.  The "meatballs" were quite fragile and broke up to resemble spaghetti bolognaise.

Digression: I had rushed home from work so I could eat dinner quickly before a Kombucha workshop at the library.  Deano who ran it was a born story teller and great fun to listen to.  My favourite comment of the night was: the first fleet survived on beer but imagine if they had drunk kombucha and how much nicer they would have been to the Aboriginal people.  I am not quite brave enough to try kombucha but perhaps it is a summer holiday project. 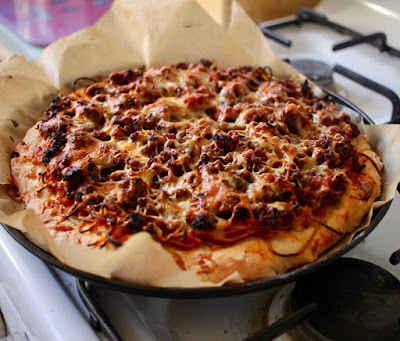 We had some spaghetti and meatballs leftover for Friday but that is our pizza night.  So I made spag bol pizza.  It was really filling.  And fun to have something different.  So many fancy pizzas in restaurants these days are often not vegetarian or full of processed meat substitutes that don't appeal to me.  If I ever open a pizzeria I will definitely offer this pizza.  (But don't hold your breath waiting!)

Meanwhile, it has been busy here with Sylvia's school holding a fete because the public are coming to vote in the Victorian state election tomorrow so there is a captive audience.  We have been making jam, clearing out books and toys, and baking for the cake stall.  Another busy weekend looms.

Place lentils and stock in medium saucepan and bring to the boil.  Simmer for about 10 minutes or until lentils are soft but not mushy.  Turn off heat and sit with lid on for another 5-10 minutes.

Cook potatoes until soft, drain and mash with a pinch of salt, a knob of margarine and a drizzle of milk.

Fry onion for 5 minutes in oil and then stir in garlic for a minute.  Remove from heat.

This mixture keeps about 5 days in the fridge.

When you are ready to cook, heat a few tablespoons of mixture in a large frypan over medium to medium high heat, drop dessertspoonfuls of mixture in the oil and turn when golden brown.  Alternately you can spray with oil and cook either under the grill (broiler) or in the oven.

Place lentils and stock in medium saucepan and bring to the boil.  Simmer for about 10 minutes or until lentils are soft but not mushy.  Turn off heat and sit with lid on for another 5-10 minutes.

Cook potatoes until soft, drain and mash with a pinch of salt, a knob of margarine and a drizzle of milk.

Cook quinoa in 1 cup of water by bringing to the boil and simmering for about 15 minutes.  Turn off heat and sit for another 5 minutes

This mixture keeps about 5 days in the fridge.

When you are ready to cook, heat a few tablespoons of mixture in a large frypan over medium to medium high heat, drop dessertspoonfuls of mixture in the oil and turn when golden brown.  Alternately you can spray with oil and cook either under the grill (broiler) or in the oven.

NOTES: these are both vegan if you use vegan margarine and milk for the mashed potato.  I added some chopped tomato to the quinoa cooking mixture because it was leftover and needed to be used.  Both "meatballs" tend to be very fragile and fall apart easily.  Breadcrumbs might help but I was trying to avoid them.

On the stereo:
Bird on the Moon: Rita Braga
Posted by Johanna GGG at 22:51