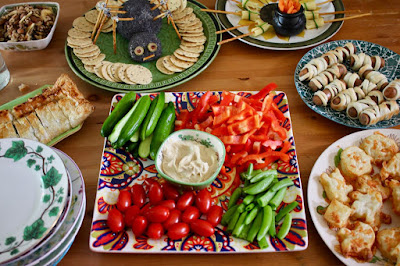 Today we held our annual birthday lunch to remember our sons Alex and Ian.  Sylvia thinks it is all about her celebrating Halloween (well, she says she knows what her brothers would like).  We had lots of fun making spooky food to share with a small group of family and friends.  Perhaps the most impressive looking savoury food was a spider cheese ball. 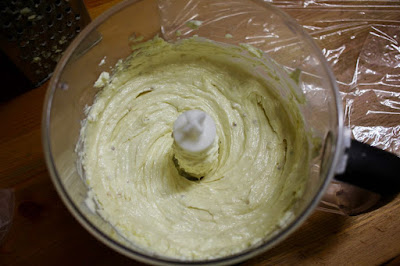 We spent yesterday tidying the house and making food and some craft candles.  I think I put off making the cheese ball til late because I didn't really know what I was doing.

I had seen a spider cheeseball on Lorraine's Not Quite Nigella blog where she has amazing posts on her annual Halloween party.  By the time I had looked around to get ideas on cheeseballs, I had forgotten to return to her recipe, which in hindsight actually looks wonderfully simple.  She has lots of fantastic Halloween recipes and ideas. 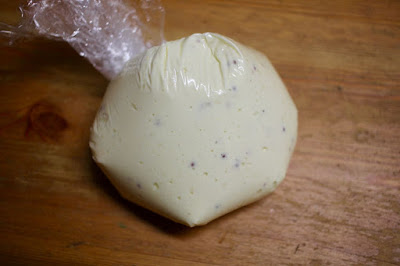 I ended up looking at The Kitchn post on cheeseball's because I liked the way they give lots of ideas as well as step by step information.  Once I had blitzed it in the food processor and wrapped it in a ball it seemed soft and not anything like a ball.  I was not confident. 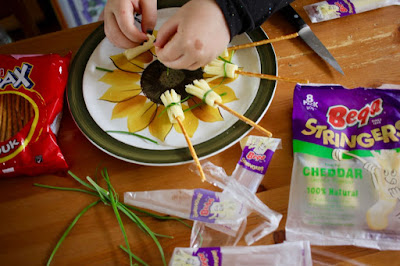 This morning we continued to make more Halloween food.  Sylvia had quite a few recipes that she decided to either make by herself or with me.  We had bought the pretzel sticks weeks ago because they are never about when we need them.  The string cheese is pretty easy (compared to years ago when I could not find it and used Swiss cheese).  All I did to help her was cut the spring leeks from the garden. 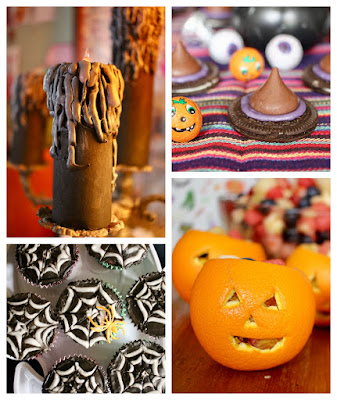 She made "cheese puffs" (layers of puff pastry and grated cheese) and mummy sausages with little help from me.  When I told E I thought there was a lot of cheese on the menu he replied, "Blessed are the cheesemakers".  Sylvia also made witches hats, carved jack o lantern oranges for fruit salad and did lots of hot glue gun work on candles, as well as helping to ice the spider web cupcakes.  (More on these in future posts.) 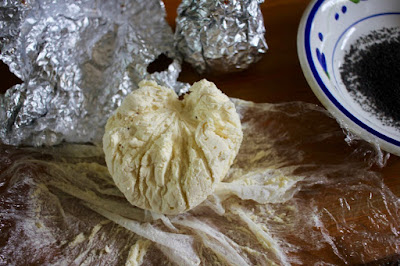 When I took out the cheese ball this morning, it did not look auspicious.  It was quite a mess.  But at least it was keeping its shape.  A little moulding in my hands made it more round.  And with poppy seeds coating it, it looked pretty good. 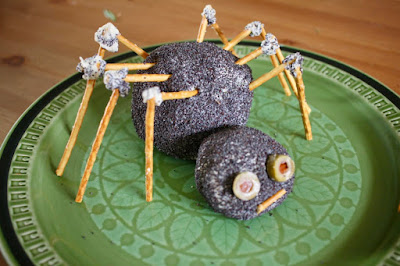 Then I had the fiddly work to get the legs attached.  I connected the two pieces of pretzel stick before putting in each leg but wonder if it would have been easier to attach the pretzel to the body and then stick on the other half of the leg.  Then the eyes and some crackers around it.  Once that was done I then made sure the house was as neat as it could be and chopped some vegies to have with hummus. 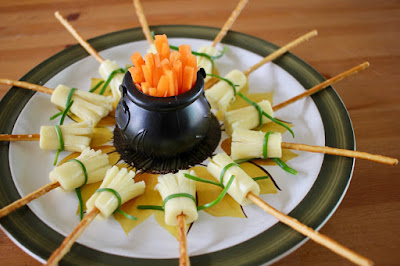 By then most of our guests were arriving.  We had the broomsticks with the cauldron of carrot sticks to offer when everyone arrived.  I organised the food on the table around a vase of lovely flowers from Kerin.  I was too busy with everyone to take too many photos after that. 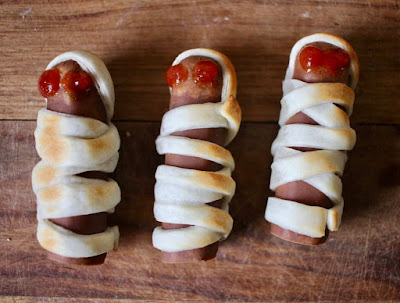 We had prebaked the mummy sausages and cheese puffs earlier.  So when everyone arrived, I put them in the oven to warm up.  We cut the sausages in half so they would go further.  I only did a six pack of sausages but two would have been better.  Luckily my mum also brought one of her lovely cheese and spinach pies but that went quickly too.  By the time my brother arrived late, we could only offer him the spider's bottom and some veg and hummus.  But we did make more mummy sausages for dinner and played with the idea of blobs of sauce for eyes. 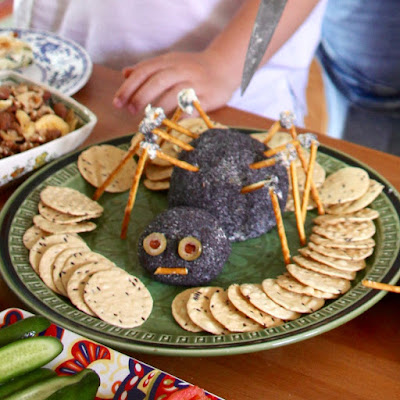 I don't think the cheese ball was a complete success.  My dad posed with a carving knife and the spider but it actually took a while for anyone to be brave enough to dig in.  It tasted very strongly of garlic.  I had thought the taste might settle overnight but it did not seem to.  The recipe had called for 1-3 cloves, but my one clove seemed strong.  I wouldn't mind another go at the cheeseball one day.  But for now the rest of my cheeseball might end up in a soup or pie.

The roses were blooming and the sun shining while we enjoyed lunch.  Once we had filled out plates we sat and talked politics and travel and work.  Sylvia had fun with a school friend and her cousin.  My nephew was able to sit and chat with the adults.  My mum gave me some gardening advice that my friends were taking on board too.  Then everyone went home and Sylvia put away her Halloween decorations for another year.  But I will have some more Halloween posts on our lunch soon!

Spider Cheese Ball
Adapted from The Kitchn and Land O'Lakes

Scoop 4/5 of the mixture into a pile on a large piece of clingfilm.  Bring corners together and twist to make a ball.  Wrap in foil.  Don't worry if it is not quite a perfect ball.  Repeat with remaining cheese mixture to make a smaller ball.  Refridgerate both balls overnight or up to 6 days.

When you are ready to use, remove balls from fridge an hour or two beforehand.  Unwrap foil and clingfilm.  They will not be quite perfect but you can use your hands to mould into shape.  (Take out a little cheese to set aside for legs.)  Tip some poppyseeds into a shallow bowl (eg a pasta bowl) and roll cheese balls in them to coat.

Arrange on tray next to each other.  Break pretzel sticks to have 8 lots of one short and one longer leg.  Stick shorter piece in the spider body, place little blob of set aside cheese mixture on edge and stick on larger stick to rest on plate.  Repeat so you have 4 each side.  Place olives on face for eyes and a little stick below for a mouth.  Dig in.  Or keep in the fridge up to a week (including the time you have left it in the fridge before starting.

On the Stereo:
Just the Beginning: Grace Vanderwaal
Posted by Johanna GGG at 22:28