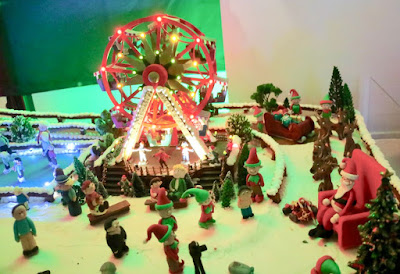 Finally I have finished my Christmas baking, Sylvia is in bed and I can relax in front of the Carols by Candlelight on the telly and share one last post before Christmas to show off some of Melbourne (and Geelong's) fantastic festive offerings. 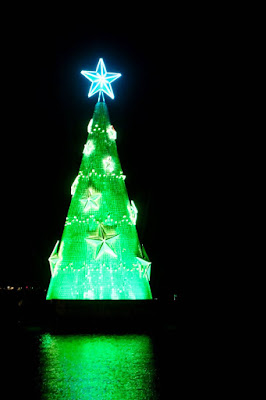 We have been going to see Geelong Christmas lights on Christmas night each year for the last few years but this year we went earlier as this suited my dad better.  He is always part of the trip and so we went with him and my niece Ashy.  Ashy and Sylvia really loved listing the lights. 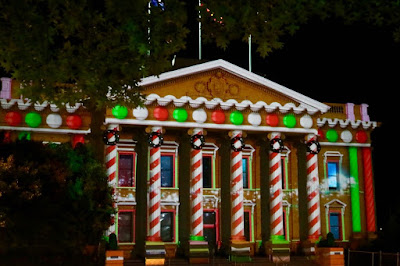 The lights at Geelong Town Hall were slightly different but fun all the same. 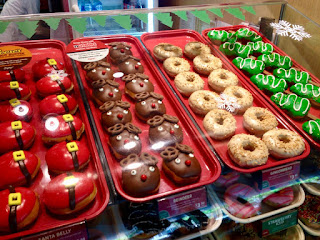 This week we had two late nights out with Sylvia. Firstly we went to the city on Wednesday night to see the sights.   We started with Lord of the Fries burger and fries at Fed Square.

Then headed off for a doughnut.  I really wanted to check out the Doughnut Time Christmas selection but they had closed.  Krrispy Kreme (above) ran out of their Christmas doughnuts.  So we had Ben and Jerry's ice cream.  Sylvia had part of mine because after a taster of the sweet cream and cookies, she chose it and then decided she didn't like it.  My new york fudge was excellent. 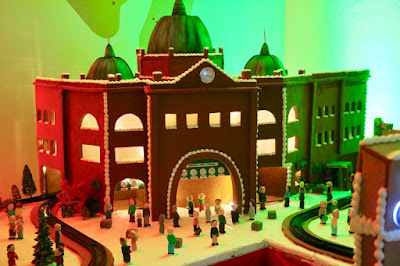 It seems we were later than usual on our Christmas city trip.  So we hurried along to the Gingerbread village at the Melbourne Town Hall.  We arrived just before the security guard put the sign up to say they were not taking any more people.  I felt sorry for the guy who had to disappoint lots of little kids by telling them they could not come in.  He was actually a really nice guy.  And we felt really lucky to have just got in to the queue rather than resenting having to wait 10-15 minutes to get in. 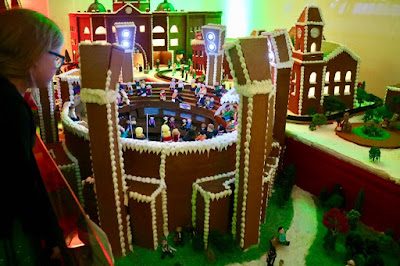 I really enjoyed the village this year.  It is made up on iconic Melbourne buildings made of gingerbread.  There were more icons this year than on my last visit.  Above is the MCG and further up is Flinders Street Station. 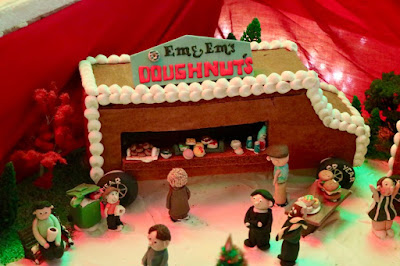 There were also some really great attention to detail.  Sylvia was very excited about the doughnut stall. 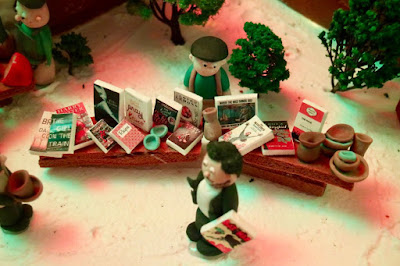 And we all had fun spotting book titles on this bookstall. 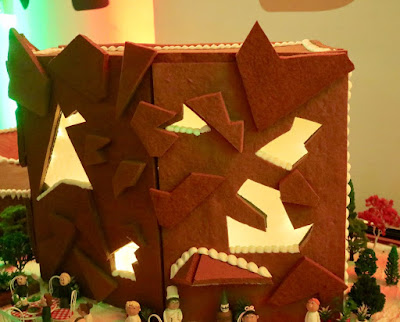 Federation Square made an appearance which Sylvia enjoyed because we had just been there. 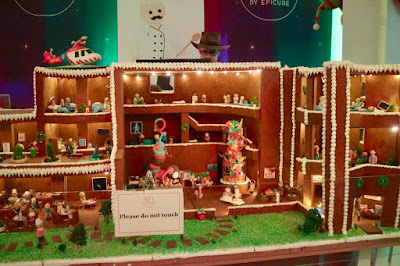 My favourite building was the Royal Children's Hospital.  So much detail.  And as Sylvia and I have been there quite a few times, we recognised quite a few places.  The aquarium, the odd pink and blue figure in the foyer and or course the meerkats.  I really wanted to stay for much longer than we had. 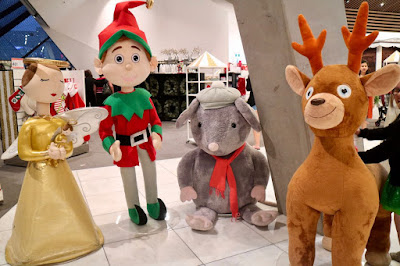 Then we headed to Myer where Sylvia swallowed her disappointments bravely.  It was after 8.30pm and there were still huge queues at the Myer Christmas Windows so we gave them a miss.  Then Santa gave us a miss because he had already gone by the time we arrived. 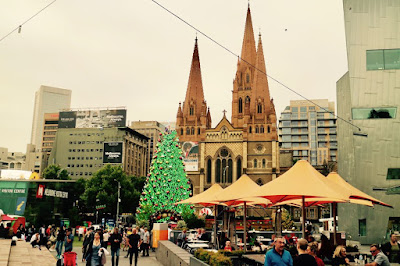 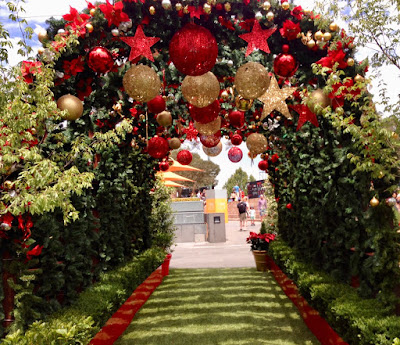 And this photos was taken weeks earlier when Sylvia and I were in the city and she got to visit Santa in Fed Square on this visit.  The archway of baubles and stars was really popular for photos both during daylight and when it was lit up at night.  So it was quite an achievement to get this photo with no one in it. 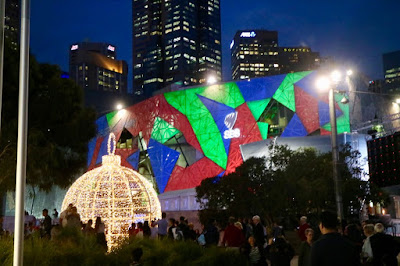 The huge Christmas bauble was a great crowd pleaser - it was fun to walk inside and take photos.  Hard to get near and take a photo without the crowd around it.  But it is fine to share.  It is Christmas after all! 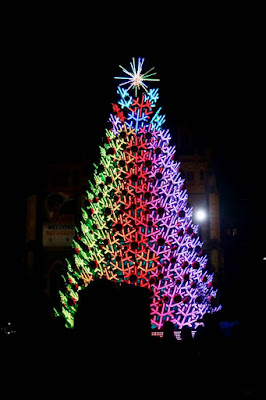 The Christmas tree was light up and had a light show at regular intervals.  Someone had put a sign in front of it and I sat where Sylvia chose rather than where I could get a clear photo.  I loved how where we sat we could watch the tree light show and then the light show on the building. 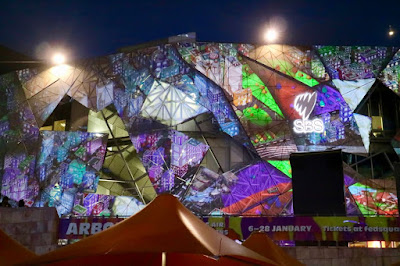 Here is the light show on the Fed Square building.  The odd shapes on the building made it a bit of a challenge to see the pictures but it was a fun story about Santa making and delivering presents.  Lots of graphics of racing past buildings. 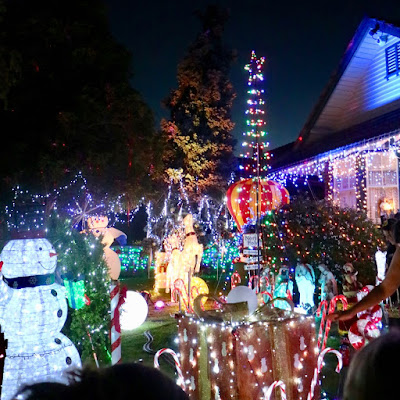 And on Friday we drove around to look at lights on the local houses.  This house was amazing and by far the best we saw.

I hope you have your festivities organised or just about.  (And if you don't celebrate, I wish you a relaxing day tomorrow or at least respite from the Christmas songs in the stores.)  And I wish you and yours a Merry Christmas with lots of good food and good company.  We are off to share Christmas dinner with family tomorrow.  Meanwhile Carols has almost finished and I still need to wrap some presents.  Back soon to share some Christmas food.
Posted by Johanna GGG at 22:25