Balieys biscuit fudge - and some other photos 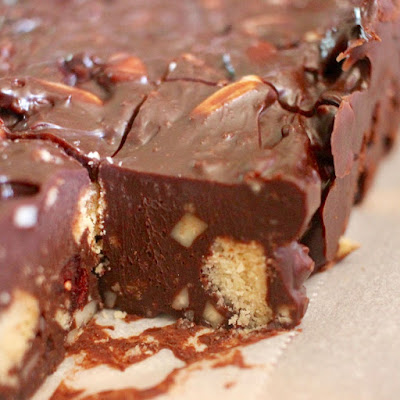 We had a neighbour over for Baileys when Sylvia had a sleepover at her gymnastics club last weekend.  It had been a long time since we drank any Baileys.  The bottle has sat there for months and often I am not in the mood or just forget.  So when I wanted to make something for our last group meeting at work for the year, I decided it must have Baileys in it. 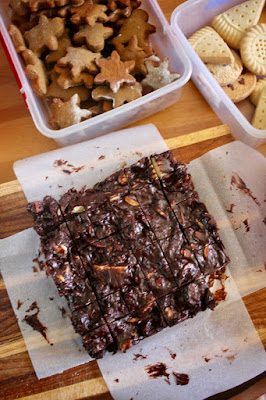 I wanted to make Baileys brownies but all the dense fudgy brownie recipes didn't have liquid in them.  So I settled on a biscuit fudge - a riff on the unbaked chocolate slice with biscuits in it variously known as hedgehog, fridge cake, tiffin and other such inscrutable names.

It suited me to make an easy no bake slice that could be made quickly after I baked a batch of gingerbread for Sylvia's class party.  It would have suited me not to turn the oven on at all after a 36 C day but there were orders to be fulfilled. 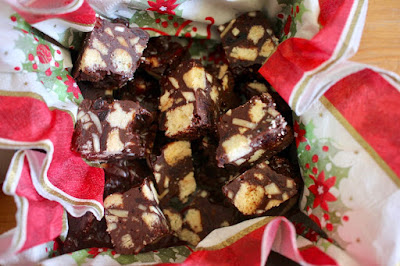 I cut the fudge into small bites the next morning and we ate it after the meeting.  It was meant not just as a Christmas treat but also as a thank you to the fantastic people I work with who were willing to go out of their way to help with some busy events last week.  It is great to have a group of adults who will readily eat such treats as I can't make it for most groups in my life because it is not kid-friendly.

They are such nice people that they all told me how much they loved the fudge.  It was quite rich and a little alcoholic but one of my colleagues was surprised later to hear it had any alcohol in it.  So it is for adults, but will suit the faint of heart. 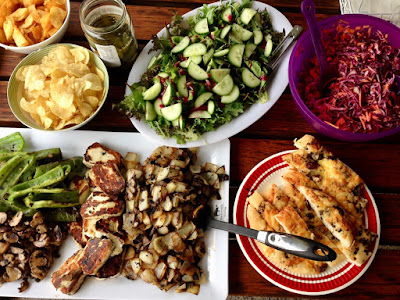 And I have some photos to share that I will tag onto this post.  Firstly are a few I took of our group christmas lunch.  We went barefoot bowling at one of the local bowling clubs (that is bowls not ten pen bowling).  I was sad that at the meal, we also farewelled the only other vegetarian in the group but at least we still have some foodies left who love to discuss all sorts of food and baking.  The vegetarian offerings were great with lots of salad and barbecued vegies as well as haloumi and vegie burgers. 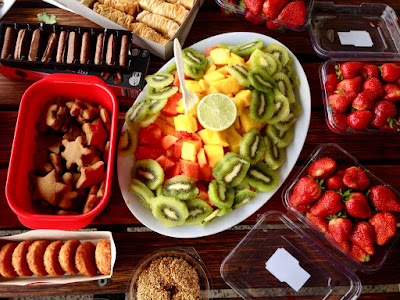 We had a bowls tournament before dessert.  My partner and I had a game plan to get to the dessert table as soon as possible.  (That means we played really badly.)  It was lots of fun and dessert was excellent too.  I took along gingerbread.  We also had baklava and chocolate wafers and lots of fruit. 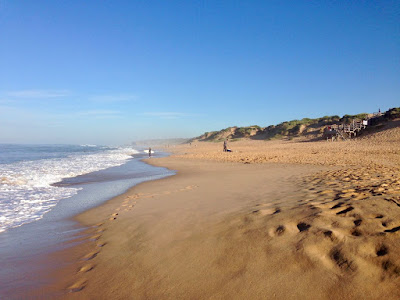 I didn't take any photos of the food at our back-to-back work events the week before.  So instead I will share a photo of nearby Gunnamatta Beach.  This is the beach that was too scary for us kids to swim in when we were little and I still have an instinctive fear of it and would only wade in the tide.

Just in case you think I am exaggerating, it is 50 years on the weekend since we lost Australian Prime Minster, Harold Holt in Cheviot Beach just up the Mornington Peninsula and his body was never found.

Fortunately the food was less scary.  Generally it was pretty good with lots of salads, arancini balls and lamingtons.  I did learn that when you order a vegetarian meal at a sit down dinner, it is best not to go off talking to colleagues on the other side of the room.  And I managed to be on a table the came 2nd in the trivia quiz. 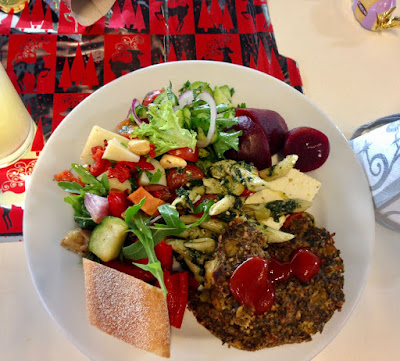 We also had our departmental Christmas lunch this week.  Yes there has been a lot of eating out lately with work. There were lots of good salads and black forest cake for dessert.  Unfortunately the bureaucracy decreed that there would be no frisbees on the oval by the pavillion where we were eating.  But what do you expect of a workplace where the costs of corridors is a talking point! 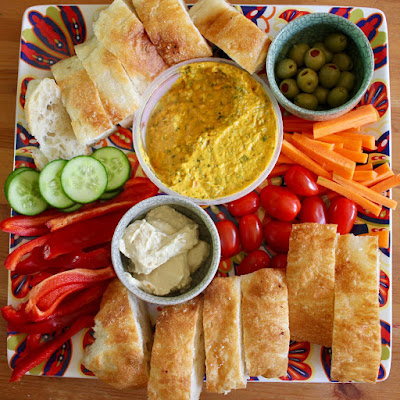 The above platter is from my own kitchen and put together with very little energy (which is all I have had to spare for the kitchen lately).  Dips, vegies and turkish bread are a favourite summer lunch.  We had this when Sylvia's kinder friend and her mum came over to help decorate our Christmas tree on the weekend.  (When we went to a carols service the week before and Santa asked who had decorated their tree, Sylvia was very cross she could not say yes.) 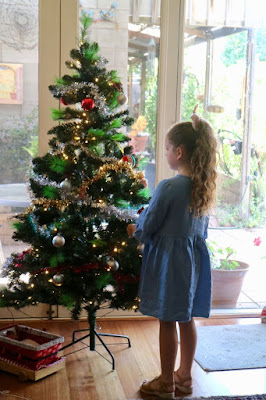 The day after, we went to my parents to help decorate the tree.  I was enjoying it until my camera stopped working.  I felt pretty silly when I took it to the camera shop and they said it was just a full memory card. I also was a bit annoyed that there was no clear sign of this on the camera (that I bought last year and have been filling the one memory card since) and not clear diagram of what all the numbers on the display mean if you look up the instruction manual.  Anyway crisis over.

So you see it has been a crazy busy time and the next few days will continue to be crazy.  If you want an easy last minute festive gift for adults, I highly recommend this fudge.  It is pretty adaptable to different liquors or add ins.  I hope to be back before Christmas with a few more festive photos.  Hope your holiday preparations are going well.

Line a 15cm square tin.  Break up or cut shortbread into chunks.  Measure out cranberries and almonds (because you want to be prepared to mix them in before chocolate mixture thickens).  Gently melt chocolate, condensed milk, Baileys and butter.  Mix in shortbread, cranberries and slivered almonds.  Scrape into prepared tin and use the back of a spoon to smooth down the mixture into the tin.  Chill until firm - I did this overnight.  Slice into small chunks - I sliced mine 6 x 6 so I had 36 pieces.  Wipe knife occasionally and dry if you want your pieces to look neat when you slice them.

NOTES: I used Lindt chocolate - 100g of 78% dark chocolate and 100g of sea salt dark chocolate.  This fudge is as rich as the chocolate you use.  I also used margarine rather than butter.  I didn't measure it very precisely, hence calling for a dessertspoon of butter.  Feel free to substitute the liquor of your choice or different add-ins. I probably could have had some more add-ins but I liked having lots of fudge around them.

On the Stereo:
Dr. Demento Presents the Greatest Christmas Novelty CD of All Time - Various Artists
Posted by Johanna GGG at 23:34