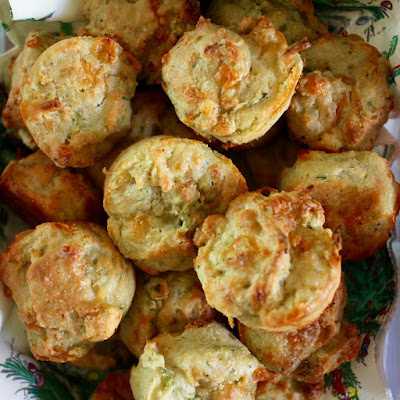 When we were planning to visit some properties for Open House Melbourne after Sylvia's gymnastics class, it occurred to me that we hadn't factored in lunch.  And a young girl needs lunch after gymnastics.  Sylvia had mentioned she had made zucchini muffins in the Kitchen Garden program at school so I decided to try changing one of our favourite cheese muffins into zucchini muffins. 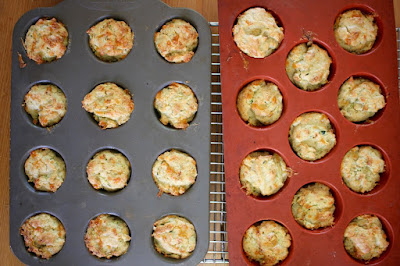 The muffins were made after I had made pancakes for Sylvia and her friend who had slept here the night before.  The two girls were a bit flat (tired) as the morning went on but then they discovered the wonderful combination of ribbons and wind.  They were outside marvelling at the ribbons swirling and dancing on the strong wind gusts.  I had hurried through baking muffins and rushed outside to go to gym and found that the ribbons and wind had turned on me.  The ribbons were tangled in the rosebushes and, as I hastily tried to get them out, the wind would rip them out of my hand and tangle them some more.  I was very windblown and cross by the time I emerged with most of the ribbons in a bundle and my hands cut by thorns. 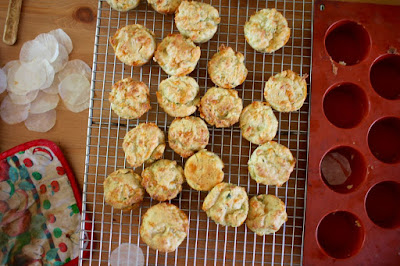 The girls enjoyed snatching a warm muffin or two in the car.  Later that day when Sylvia had finished her gymnastics class, the muffins were great to snack on as we were driving around Melbourne's Open House properties with my parents chatting about places they had known, what had changed and when to ignore the GPS because they know Melbourne well enough even though it is over 40 years since they last lived here.  Seeing the properties was so much more pleasant with a well fed kid.  And they made me happy that I managed to get some greens and protein into her lunch on the run.  A rare win!

I am sending these muffins to Eat Your Greens.  Shaheen is hosting this month and has been sharing lots of zucchini (courgette) recipes so I know she will appreciate these.  Check out her Allotment 2 Kitchen blog for lots more zucchini recipes.

Preheat oven to 200 C and grease and/or line 2 x 12 hole mini muffin tins.  (Mine are silicone so I just cut small circles of baking paper for the bottom.)

Finely grate zucchini and squeeze out as much liquid as possible - I did this by pressing it in a colander but it could be done by making a bag of a teatowel or cheesecloth and squeezing out the liquid.  Mix with soy milk and olive oil in a small bowl.  Set aside.  Mix the remaining ingredients in a medium mixing bowl.  Add the liquids and stir until just mixed.

Spoon batter into mini muffin holes.  Bake for 15-20 minutes until golden brown and a skewer inserted in the middle comes out clean.  Sit for 5 minutes before turning out onto a wire rack to cool.


NOTES: These could be baked as regular sized muffins but might need to cook slightly longer.  We used soy milk and dairy cheese but dairy milk and vegan cheese could be used depending on your preference.  Given that the cheese muffin recipe these came from worked well with vegan (bio)cheese, I would recommend making these with vegan cheese if you want vegan muffins.  To make nut free, substitute flour for ground almonds.

On the stereo:
Fin de siecle - The Divine Comedy
Posted by Johanna GGG at 22:23