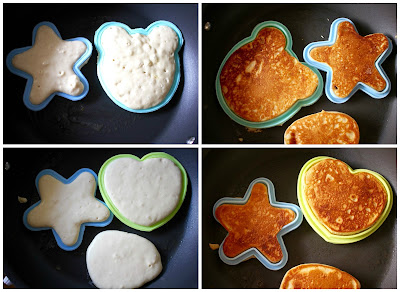 August is the month when the year seems to be whizzing by at a frightening rate.  In July you can kid yourself that it is still the middle of the year but in August we are well and truly on the downward slope and suddenly feeling the pressure to do everything we promised at the start of the year.  So it is not just the cold, the dark, the rain and the lack of good fresh fruit that makes August a difficult month.

Luckily pancakes brighten up chilly winter mornings.  Pancakes shapes bring even more cheer.  We found these cheap shapes in a local $2 Shop.  The might have been meant for eggs.  We have had fun making fluffy vegan pancakes in shapes, though they rise a bit so I have had to try and go easy on the amount of batter in the shapes. The fluffy vegan pancakes are quite like pikelets if you make them small.  However sometimes Sylvia loves to buy 'pikelets' which I think are more like pancakes as they as quite thin.  Lately they have come in a few different flavours.  The one above in cinnamon and we have also had chocolate.  I still prefer home made. 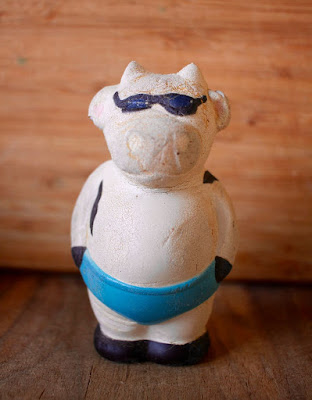 This battered old thing is a stressball in the shape of a cow.  We had her for ages.  I think she was a present.  And quite a lot of fun.  Now she has grown so worn that she is here for old times sake before heading for the out pile. 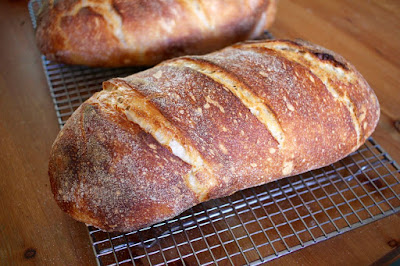 Sourdough bread.  Fresh loaves are always a delight in our kitchen. 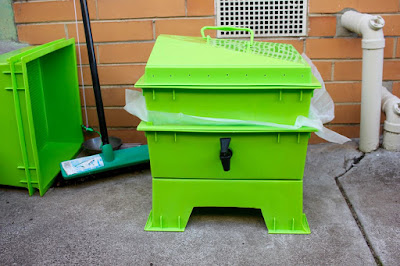 My latest venture for reducing some of our landfill is a worm farm.  The instructions make me feel quite worried for my new little worms.  It said that they like to be warm.  This worried me on the first night here when it was 2 C.  However they are still hanging in there after a few weeks.. 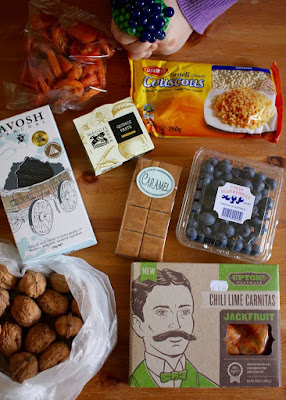 During the school holidays, a trip to the Queen Vic Market saw us come home with many goodies.  The walnuts, charcoal lavosh crackers, blueberries, quince paste and dried apricots were for the Christmas in July dessert platter.  The caramel fudge disappeared quickly.  It was very good.  I am still looking for opportunities for the Israeli couscous and the chilli lime carnitas jackfruit.  I also came home with purple potatoes and wish I had also bought the purple brussel sprouts. 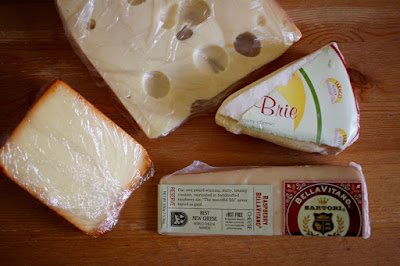 I also bought a few cheeses at the Queen Vic Market for the dessert platter: Swiss cheese. smoked cheese, brie and a raspberry infused cheese.  It is a great joy to choose and eat good cheese. 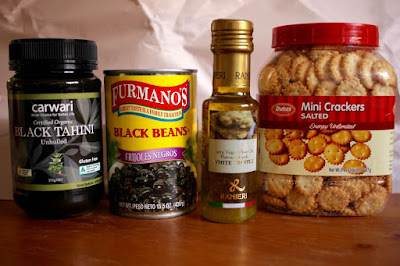 I also picked up these black tahini, black beans, truffle oil and mini crackers at the Queen Vic Market.  I have used all but the black tahini.  I am wondering how to use it.  I have tried it in baking biscuits but would like to try it in bread, cake, brownies or even scones (remember it is International Scone Week next week). 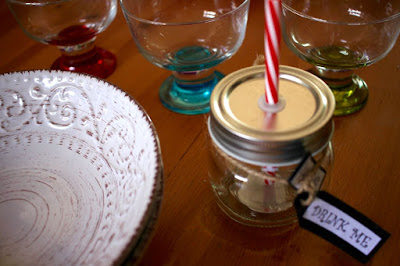 A few new bits are around the kitchen.  Some new bowls with swirly patterns that caught my eye.  When I bought them home, I found that E had also fancied them in the shop.  In the back of the photo are some new ice cream bowls that I bought months ago that had an outing in the school holidays when Sylvia had a yen to make Sundaes.  The mason jar with straw came from an Alice in Wonderland party that Sylvia went to a few weeks back.  A fun way to give out "party bags" in the jar. 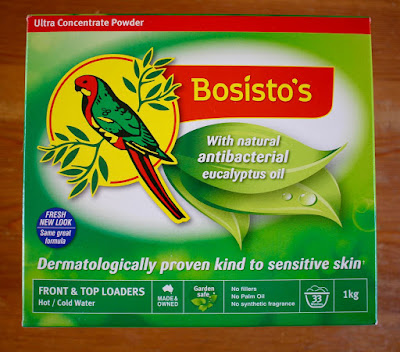 I have recently become a fan of Bosisto's washing powder and stain remover.  A friend recommended the stain remover and it really does work well.  I had been looking for a good environmentally friendly washing machine powder and so I have started using this one.  The eucalyptus smell is quite comforting. 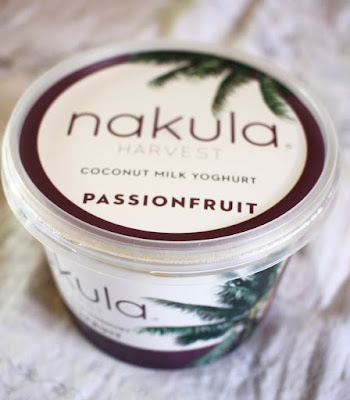 I have tried a few vegan yoghurts and found then soy ones to be thin and taste very odd and the coconut ones to be too fatty and bland.  Last week I was looking for a yoghurt and noticed there were quite a few new vegan yoghurts in the supermarket aisle.  I think there were 4 or 5 brands of coconut yoghurt.  I decided to try this Nakula passionfruit yoghurt.  It isn't bad but a bit rich.  I think the passionfruit flavour helps give it a bit of that slightly sour flavour. 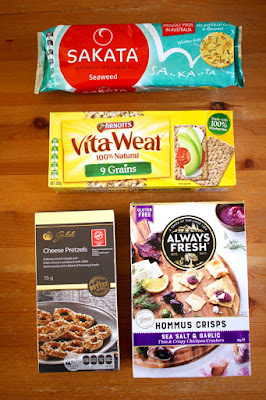 As I haven't been baking much, I have been buying crackers for snacks.  Rice crackers and Vita Wheats are favourite.  Recently I tried the cheese pretzels which are ok but I prefer the more yeasted pretzel crackers than these pastry ones.  I am yet to try the hommus crisps.  They sound interesting but disappoint me that it is mostly potato starch rather than chickpea flour. 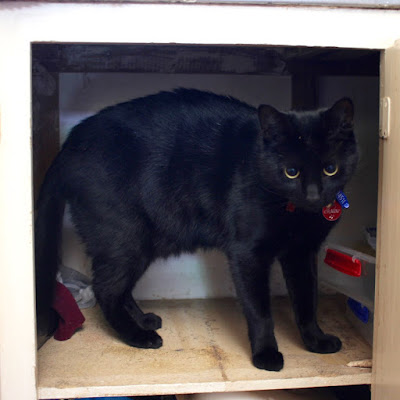 Lastly, I recently had a clean out of plastic tubs because I found some of the Decor ones that I like and bought them before mine could get too manky.  Once the tubs were out of the cupboard, our cat Shadow hopped in.  He's always curious about what is going on in the house.

As for our cupboards, I am not feeling very happy about them because I managed to catch my jeans on a handle as I walked through the kitchen tonight and it tore a hole in them. Usually I like our 1960s cupboard handles but tonight I wish we had smoother and rounder handles.

I am sending this post to Sherry of Sherry's Pickings for the In My Kitchen event, that was started by Celia of Fig Jam and Lime Cordial,  If you would like to join in, send your post to Sherry by 10th of the month.  Or just head over to her blog to peek into more kitchens.
Posted by Johanna GGG at 22:37