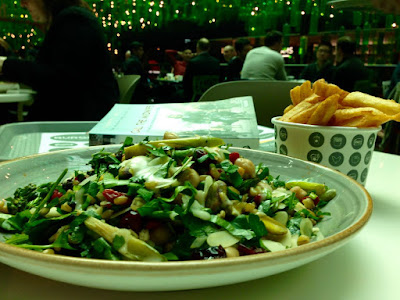 You gotta be quick in this town.  Some cafes are there one moment and gone the next.  Take Sake Jr for example.  It was my new favourite cafe in the city.  My friend Jane took me there during her lunchtime and I loved it so much that I was so determined to get back to it.  However by the time I finally returned a few months later it has closed.  Waaah!  So I tried a few other places in the St Collins Lane Food Hall. 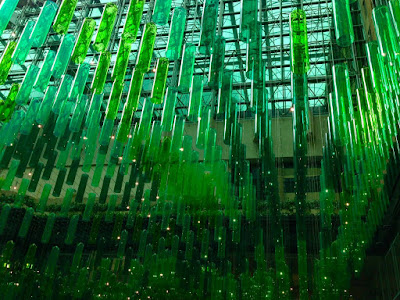 I hadn't heard of St Collins Lane (260 Collins Street, Melbourne CBD) until I went to Sake Jr in May.  For those of you also scratching your head, it is not a lane but a shopping centre.  Formerly known as Australia on Collins.  They've given it a face lift and a new name.  It shows how trendy Melbourne laneways are that they are now calling shopping centres "lanes".  I just about forgive the silliness of it because I really love the green columns hanging from the ceiling of the food hall.  However it makes for a difficult light to photograph food. 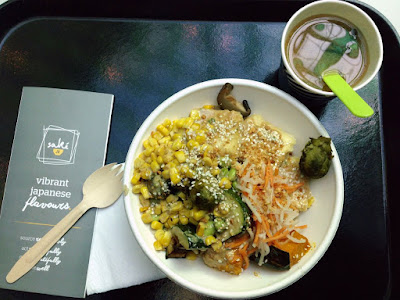 Sake Jr aims to serve beautiful fresh Japanese food.  Indeed I found it to be a notch about your usual food hall offerings.  And it was very easy to order a Build Your Own Bowl as a vegetarian.  I was asked if I was vegetarian or vegan and alerted to any component with fish sauce.  It was refreshing to have someone tell me rather than have to be asking.

Here is what I had in my bowl:

It was such a lovely healthy bowl of rice, tofu and vegies.  The sesame yuzu dressing was wonderful - creamy with a slightly tart citrus flavour.  I also had a miso soup on the side.  Since finding that Sake Jr is no longer in St Collins Lane, I have found that it is now open in 555 Bourke Street.  It is the Western end of the city where I don't go often but I am considering making a trip there just to go to Sake Jr.  However with the way cafes open and close, I guess I need to be quick. 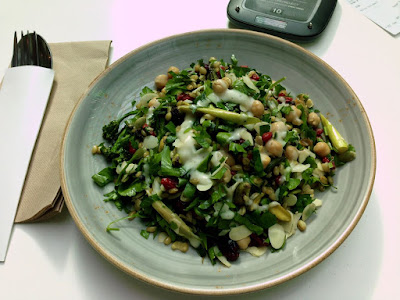 When I found that Sake Jr had closed I checked out the other offerings in the food hall.  At first glance it was the usual offerings of Chinese, Indian, pizza and burger.  However I found that 70 grams did not just offer pizza (which looked very good) but also a selection of salads. I chose a freekeh salad of mixed nuts, asparagus, broccoli and parsley with caesar dressing (there was also a choice of vinaigrette). It was delicious and healthy. 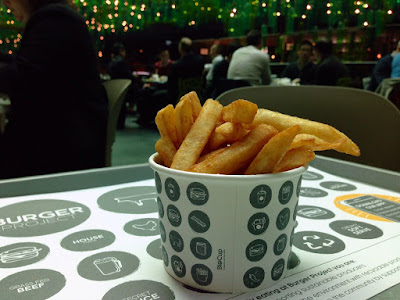 It was so healthy that I decided it needed some chips on the side.  I had checked out the fancy Burger Project and not been wowed by the one vegetarian option of crumbed confit mushroom, cheese, onion, pickles, tomato, lettuce and secret sauce.  Mushrooms are not my thing.  But the chips looked really good.  They were hot and crisp and just what any healthy salad needs.
Posted by Johanna GGG at 12:26