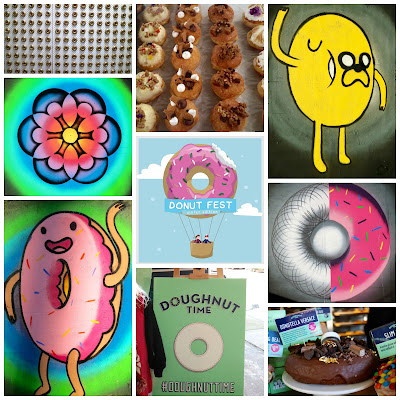 When Sylvia found out there was a Donut Fest in our part of town, she begged to go.  So I dutifully bought tickets.  Unfortunately by the time the fest rolled around a week ago, I was sick with no appetite and Sylvia had been up with a fever the previous night.  Not all all auspicious.  But we dragged ourselves out. 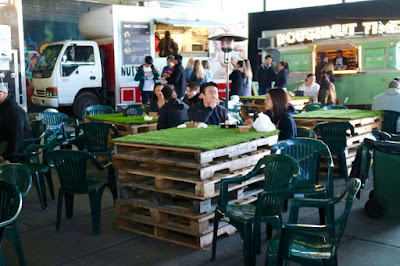 If Sylvia had not been so keen, I don't think I would have gone along.  I didn't like that there was a $15 fee (or $10 early bird) to enter to purchase food.  (Even if a portion goes to charity.)  And when you entered, you had to put money on a card because it was a "cashless event".  But Sylvia is rather smitten with anything doughnut so it was worth it to make her happy.  Admittedly I might have enjoyed it more if I hadn't spent a week with no appetite and not much interest in going out to buy any sort of food. 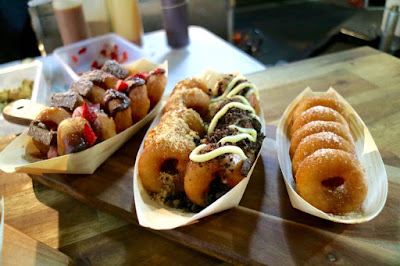 I had hoped it would all be inside, having quite a sore throat, but there was a little outdoor area with food vans.  There was quite a range of doughnuts: the cute little doughnuts (pictured above) from Dipp'd, churros, good old jam doughnuts, Hungarian doughnuts, tim tam doughnut burgers, Greek doughnuts, and a wonderfully named Nuts About Tella selling the creative Leaning Tella of Pisa. 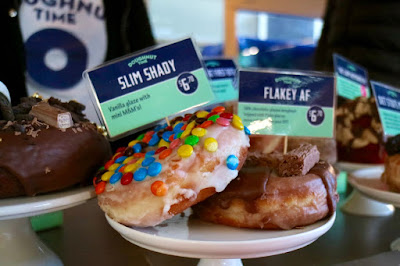 Sylvia, however made a beeline for Doughnut Time.  She is fascinated with all their doughnut designs online. 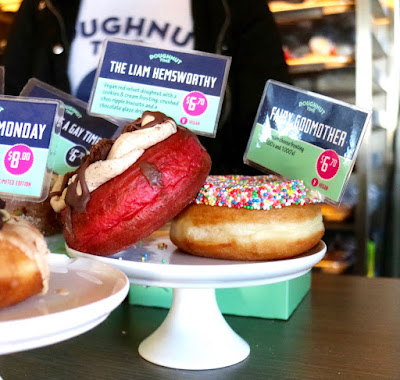 It was still pretty quiet when we arrived so Sylvia was able to grab a plastic chair and stand drooling over all the fun designs at Doughnut Time.  I was pleased to see a few vegan doughnuts throughout the festival like the ones above but I think they were in the minority. 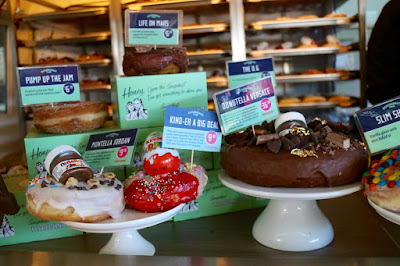 One of the problems with a doughnut fest is that there is a limit to how many doughnuts you can eat.  What I liked about the festival, was the fun of looking at fancy designs and fun names.  Who can't fail to be impressed by a giant doughnut called a Donutella Versace which had a mini tub of nutella in the middle surrounded by chocolate crumble and gold leaf?  Many more of us than actually wants to buy such a doughnut! 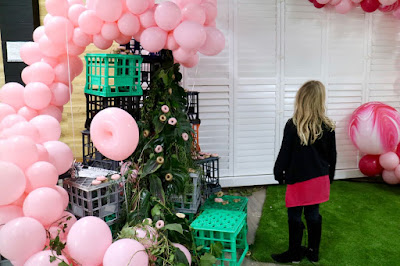 I was keen to get to the indoor place.  The venue, where they hold the Batman Market, seems to have changed since we were last there.  Upon coming in we saw what was billed by the fest as a "mini donut museum and art installation".  It was indeed "mini".  Sylvia loved the doughnut balloon. 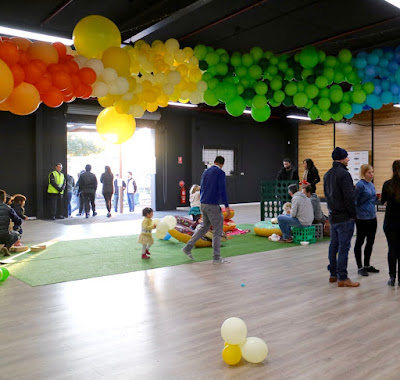 This area also had blow up doughnuts for the kids to play with and some doughnut merchandise such as t-shirts and jewellery.  It was a brightly lit indoor area that led into the dimly lit "glazed" hall with the dj and lots of doughnuts and beer on offer.  Not great conditions for photography but here are my photos of some of the offerings. 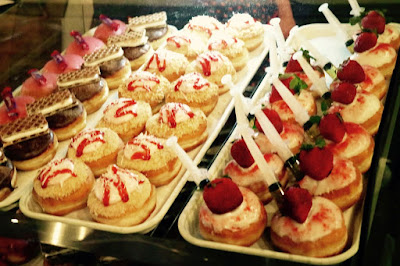 One woman we were chatting with told us that Downtown Donuts was the best value for money at $5 a doughnut and that they were some of the best on offer.  (Which tells you that this was not a cheap event.)  Downtown Donuts did some fun riffs on Aussie favourites: iced vovo, polly waffle, red skin, as well as a more adult strawberry and champagne doughnut with a syringe of champers to inject in them.

I was sad that they had sold out of the caramillionaires.  "Sea salt caramel filled donut with dark chocolate ganache, golden Caramello, gold choc nugget and edible gold bullion wrapped in cash."  I am not sure I would have been able to resist. 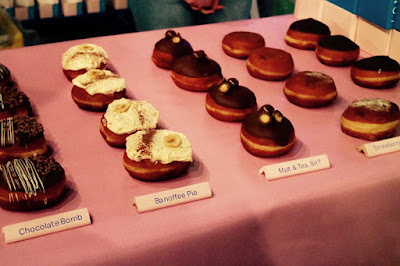 I really wanted to try the filled doughnuts from Uncle Donut in Geelong just to see how much filling they had.  The Banoffee Pie and The Malt and Tea Sir amused me. 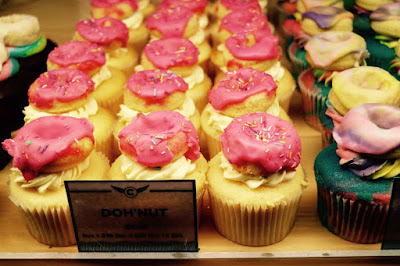 Cupcake Central advertised that gluten free and vegan options.  I was impressed at their offerings for dietary restrictions but more impressed by the cute little doughnuts on top of the cupcakes. 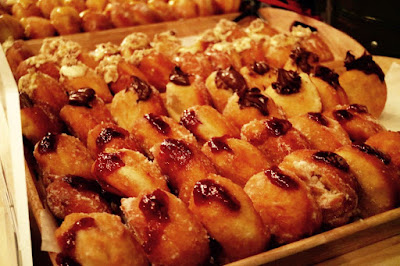 My photos don't do justice to how good the Holy Bombolina filled doughnuts looked.  I was very tempted by the nutella doughnuts but trying to move out of my comfort zone.  All the fancy doughnuts are amusing but the good old jam filled and nutella filled doughnuts are often all I want.  These doughnuts must have been good because they were awarded the Judges Award. 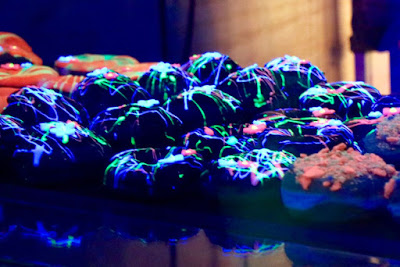 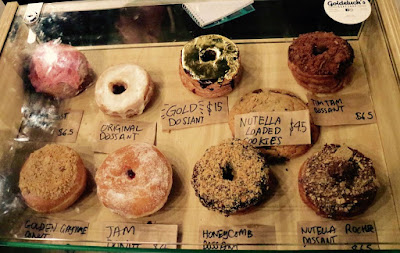 Golden Gaytime Donuts were also available at Goldeluck's stall.  They had fierce competition with all the fancy dossants (donut croissants).  It was hard to tell if I preferred the gold leaf, fairy floss or tim tam dossant best. 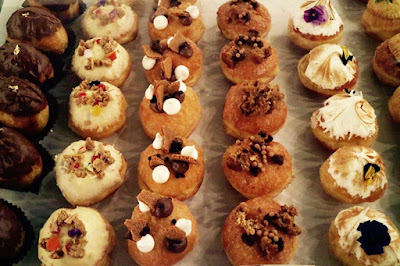 Surely though the prettiest doughnuts at the festival were made by Penny for Pound.  I am not a fan of lemon meringue pie but I really loved how pretty the lemon meringue doughnuts were.  Or what about the little pastry caps on the apple pie doughnuts and the topping on the rhubarb ginger crumble cheesecake.  They also served s'mores, sticky date and chocolate hazelnut. 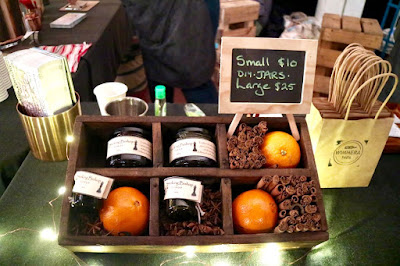 The festival was actually billed as a donut and beer fest.  I am not much of a beer lady these days so I didn't take much interest in the donut beer.  I had hoped to have a mug of mulled wine when I originally booked tickets but on the day I couldn't face it.  I had a small taster of the Smoky Bishop non alcoholic mulled wine and it was delicious.  On a good day I could have easily polished off a mug of it.  They were selling a mulled wine paste to mix into wine, which seemed a rather nice idea. 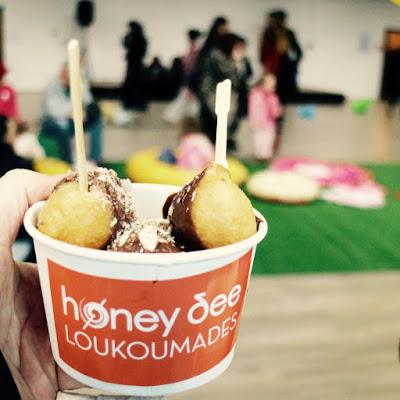 We did a lot of looking at doughnuts before we finally chose some.  I said sylvia could have two.  She chose a fairy floss dossant from Goldeluck's and a Kind-Er a Big Deal doughnut (with a Kinder Surprise Egg in the middle) from Doughnut Time.  We also bought E an iced vovo doughnut from Downtown Doughnuts and an It's Always a Gay Time custard filled doughnut from Doughnut Time because they would have loved to have been there.  Sylvia also got a doughnut necklace.

For myself I could not face one of the huge doughnuts.  So I chose a tub of little Honey Dee Loukoumades (Greek doughnuts) with nutella sauce.  They were great to eat because we weren't that hungry and they were a manageable size.  And they tasted delicious.  So good that they were given the People's Choice Award.  We ate the rest of the doughnuts at home where we could slice them up smaller.  I really liked the dossant and everyone else enjoyed the rest of the doughnuts.

Sylvia was absolutely delighted by the doughnut festival.  I am not convinced I would be keen to return but it was fun to go once, albeit a shame to be there without an appetite.