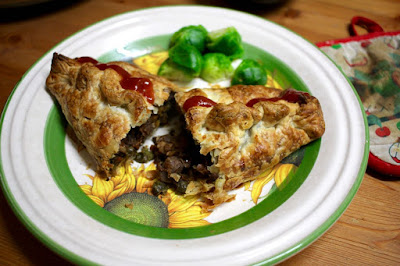 Some weeks back, I saw an Adam Liaw recipe for an Adelaide Pastie.  He talks about how in most of Australia the meat pie is the great Aussie lunch but in Adelaide it is the pastie.  Well, I beg to differ.  In my childhood in rural Victoria we chose between meat pies and pasties.  I usually chose pasties.  Even back then I wanted a little vegies in my meals.  Now, as a vegetarian, I took great delight in making these vegan. 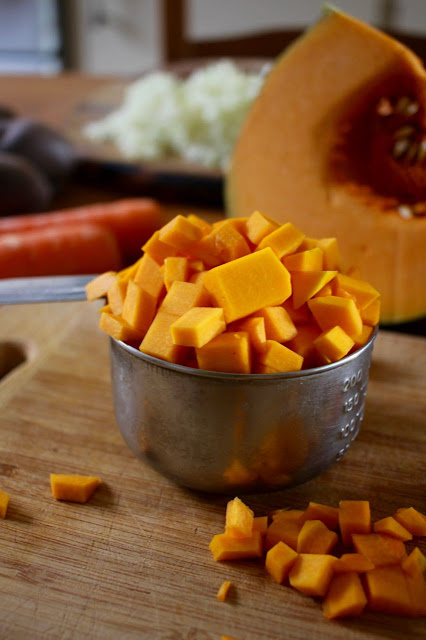 I was particularly attracted to this pastie recipe because it has pumpkin in it.  Adam Liaw notes that "Cornish purists wouldn't stand for beef mince, carrot and pumpkin in their pasties".  It makes me laugh because my version of his pastie is even further from the traditional pastie.  However as a vegetarian, I am pretty used to not being with step with the purists. 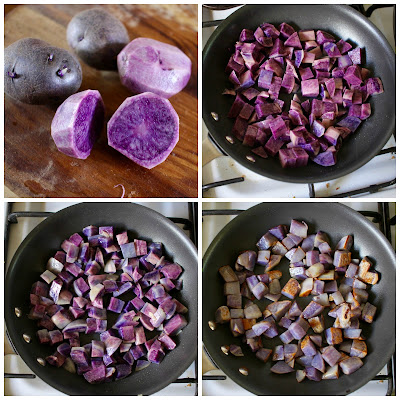 I had some purple sapphire potatoes that I wanted to use for a splash of colour.  They were beautiful to slice and chop but once cooked, the colour has somewhat leached out.  I fried them separately in case the colour made everything murky but in the end I don't think it was worth the effort of having two frypans.

I added lentils and walnuts instead of beef and upped the vegemite for flavour and colour.  Though you can see in below photo it looks quite orange and then in the photos of assembling the pasties, the mixture is very brown.  I am not sure why.  But my dream of flashes of purple never came to be. 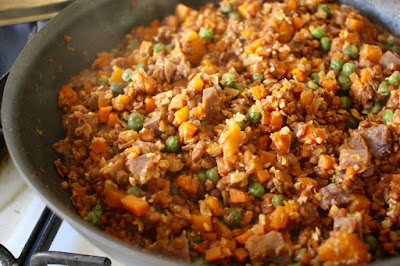 This is not a quick meal.  I spent about an hour during the day pottering about chopping and cooking the filling.  Luckily it was done before Sylvia came home with a friend from school and we decided to do a sleepover.  I just has to assemble and bake the pasties.  The kids just had puff pastry with cheese between it and some vegies on the side.  We put out the sofa bed and they sat on it with dinner and watched Journey to the Centre of the Earth (1959 version).  While it is a little old fashioned, it has great sense-of-wonder in the scenes and kept the girls' attention 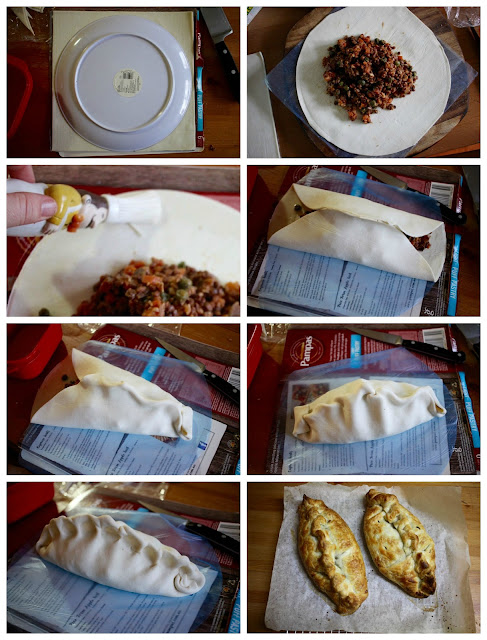 Meanwhile E and I also enjoyed the film and were very happy to have some hearty pasties to eat for our tea.  I was particularly proud of the shape of these pasties.  I have always found it hard to actually get the seam in the middle on top rather than on the side.  So I have a photographic step by step of how I did it (above) to share with other novices or just to remind myself for my next pastie.

However these are huge pasties for a big appetite and a hearty meal.  If you want them for picnics or potlucks then you can make them smaller (and even rectangular) and still consider yourself a pastie princess.  Just don't mention these to the purists!

I am sending this to Meat Free Mondays.

Toast walnuts on a dry frypan until smelling cooked.   Once cooled enough finely chop the walnuts and set aside.

Fry onion in butter over medium heat for a few minutes until soft.  Ad carrots, potatoes, pumpkin and garlic and fry for about 5 minutes.  Add remaining ingredients (except parsley) and season with salt and black pepper.  Cook another 5-10 minutes and stir in parsley.  Check and adjust seasoning again.

Preheat oven to 200 C.  Line a couple of baking trays.

Place pasties on lined baking trays.  Brush with egg or milk (I used soy milk).  Make a few knife marks for the steam to escape.  Bake for 25 minutes or until golden brown.

These are great with hot with tomato sauce and some greens or salad on the side.  But I wont judge you if you just want to eat one cold for breakfast the next morning, if you have any leftover.

NOTES: I used 4 medium purple sapphire potatoes instead of 2 large potatoes.  I fried them separated as I worried their colour would bleed and make everything murky but it didn't.  Rather the purple potatoes lost their colour and I could have put them in with everything.  I found that 1 cup of filling in each pastie made 5 pasties.  Adam Liaw directed to used 1/2 cup but this did not seem enough for the amount of pastry.  If you don't want large pastries you could do them rectangular like these pasties.  These pasties can be vegetarian or vegan.  If you want to make sure they are vegan, use vegan butter for frying, vegan puffed pastry (Pampas light puff pastry and Borgs do vegan puff pastry) and vegan milk for glazing.

On the Stereo:
The Captain: Kasey Chambers
Posted by Johanna GGG at 09:51