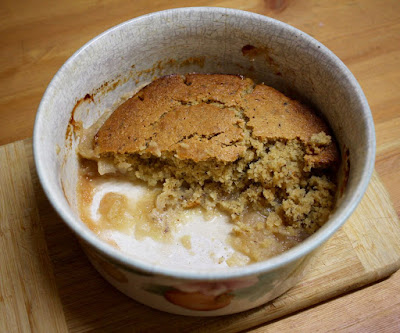 It was always "apple sponge" in my childhood.  And it was often apple sponge for dessert.  I add pudding to the name for those who think sponge is a light fluffy cake (as in Australia) or a dense buttery cake (as in the UK).  It is a dish I only make in winter when the cold dark nights demand a warm baked pudding like my mum used to make.

Though to be honest, as a child I always resented having apple sponge rather than apricot sponge.  Now I appreciate that stewed apples are far more practical than stewed apricots.  This dessert makes me nostalgic for nights waiting at the table with my siblings as my mum's big serving spoon dug into the steaming pudding.  I don't make puddings much.  Fortunately the tradition continues because my mum still makes apple sponge for Sylvia.  And it was Sylvia who requested I make apple sponge for dessert. 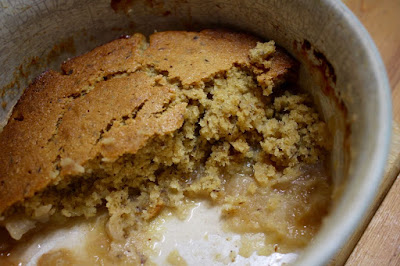 I sliced up apples to stew for the pudding while I chatted to a friend.  A kilogram seemed heaps.  I told Sylvia that there would be stewed apple leftover.  But there wasn't.  I like a decent amount of fruit in my pudding.  Just like E loves some cream or ice cream with his.  (I don't!)  We ate ours with ice cream (custard is also good).  It was delicious.  After we had finished a few sneaky spoons made their way into the dish.

I had to make more stewed apple the next day.  It was quite a lot of apple and took a while to bring it to the boil.  The first time I simmered it for 5 minutes after it boiled.  It was quite mushy, especially once it had been baking.  The second time I turned off the heat after it boiled and the apple sliced kept their shape.  I slice mine quite thinly like my mum used to (2-3mm thick).

I made the apple sponge vegan because that was what we had in the house.  I wish I could take some better photos but I will always make this pudding when the nights are dark in winter.  And it is usually such a palaver making warm puddings (because I don't do it often) that I end up serving them late and in a hurry.  So these photos will do and this post will remind me how to make it next time it is requested.

Mix the butter, sugar, egg, flour and milk to make a thick batter.  Spread stewed apples at the bottom of a greased medium sized baking dish. Spoon the batter over the apples and smooth. Bake for 45 minutes at 180 C till the batter is cooked (check with a skewer).

Peel, quarter, core and slice apples.  Place in a large saucepan with remaining ingredients.  The sweetness may need adjusting depending on the apples.  Bring to the boil.  Turn off the heat and leave to cool.

NOTES: I made this vegan by using a flax egg (1 tbsp ground flaxseed or linseed meal plus 3 tbsp water).  I used soy milk, brown sugar and half white, half wholemeal flour.  If your apples are not warm from stewing, put them in the baking dish and heat in the oven while you make the batter.  Cold apples will mean a longer cooking time.  I had a bit of liquid in my stewed apples and worried it would not work for the apple sponge but they were fine.  I stewed granny smith apples.

On the Stereo:
Le sac des Filles: Camille
Posted by Johanna GGG at 23:31