Tempeh soup, cardboard park bench and a week of eats 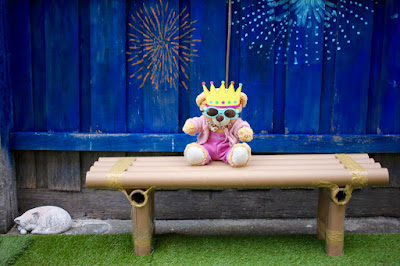 I made a wonderful tempeh stew recently.  The photos were nothing to be proud of so it seemed a good time to tell you I avoided finishing laying the astroturf in the backyard by making a park bench with the astroturf cardboard rolls and a stanley knife.  Sylvia's teddy bear Mr Cuddles loved it.  I have discovered it is for kids not adults.  And if this little piece of cardboard craft is not enough, I will also tell you about a week of dinners. 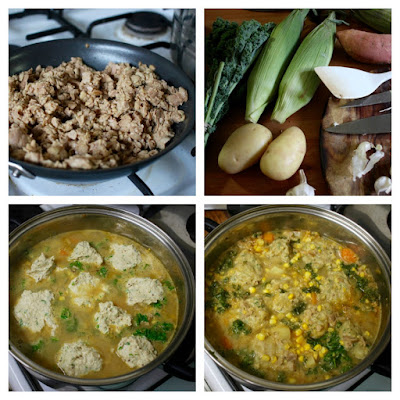 Stews are ugly at the best of times.  This one indeed tasted much better than it looked.  And I just haven't had the time to surround it by food props, which is the only way to make a stew look good.  But when you have a grumpy child who has been on a sleepover and now is demonstrating why she really did need a decent amount of sleep to function properly, it a victory to just get dinner on the table, any old way it looks.

I made the stew as a vehicle for dumplings.  The stew was delicious but the dumplings weren't quite right.  I didn't add baking powder as I mixed and matched recipes.  As I dropped them into the stew I regretted the lack of a raising agent.  I regretted it even more as I ate them.  The were dense and disappointing rather than lovely and fluffy.  However all was forgiven because the stew was so good. 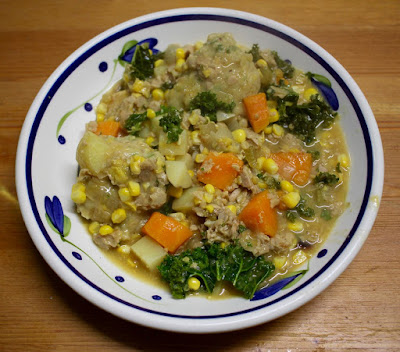 I based the stew on a favourite tempeh and corn soup.  But I changed up the flavours and added lots more vegies.  I have always liked the soup because the tempeh gives enough of an imitation of chicken to be substantial but not enough to taste like meat.  So it was also in this stew.  I hope that if I try it again with some baking powder the dumplings might work too.  (Will update when I get to do this.)  However the stew was so good, especially with rice, that I would make it again without dumplings. 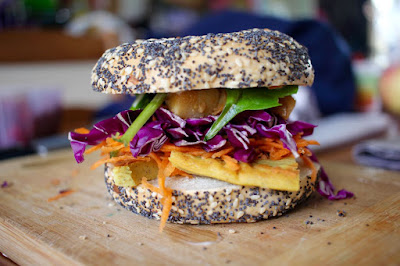 The stew saw us through a lot of the week.  I love it even more because of all those leftovers making for easy nights after work.  And while reflecting on this, it seemed a good time to share my week of dinners.

The fish and chips were from a new local shop after a maths night.  I didn't read the notice and assumed it was a night of maths games like a few years back.  But it was a night to give parents tips on helping kids develop maths strategies.  I was glad I misread the notice.  I might not have gone but it was useful and we enjoyed the fish and chips, though our corn jacks (because we don't eat fish) was a bit overcooked.

And I will make some more comments on the week of eating.  Breakfast was mostly yoghurt and weetbix bites.  Lunch was often a cheese or salad sandwich with an apple.  Above is one of my fancier lunches on a weekend after riding our bikes to the farmers market for bagels.  I had leftover omelet, leftover fried potatoes (a bit like these) which were hearty with my favourite salad sandwich fillings of the moment - purple cabbage, carrot and spinach with a lick of mayo. 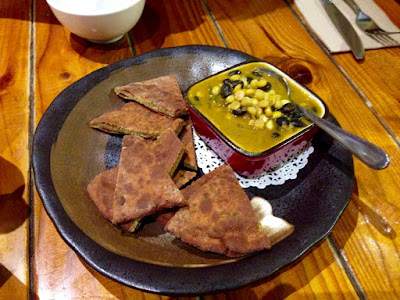 I also ate out a few times.  Probably more than usual.  Brunch at the Snug, lunch at Acustica and dinner at Shakahari.  E and I went out for dinner while Sylvia was at a sleepover birthday party.  Firstly we saw Things to Come at the cinema which is a fine understated  and beautiful movie about change in a fiftysomething woman's life.  I could not resist tasting a vegemite choc top at Cinema Nova.  It was a little grey and too much vegemite for me but worth tasting once.

The meal at Shakahari was very impressive.  We shared the Teff Seed Debut for a starter.  It was most impressive.  I loved the warm teff and besan flatbread.  The "curried black turtle bean and yellow split pea dip" was more like a stew than a dip but had wonderful flavour.  E had the Legendary Satay Shakahari.  He was very happy with his meal and could see why it was had been on the menu since 1978.  I went with a more modern Rice plus Rice.  It was a thick warming miso stew with daikon, swede, pumpkin and mushrooms accompanied by wild rice, brown rice, turmeric chestnuts and pickled cucumber.  As the waiter said, it was health food but substantial and very tasty. A bit like my stew.

Meanwhile squeeze as much liquid from the tempeh as possible, crumble with your hands then fry in 1 tbsp olive oil for about 10 minutes to brown it.

Add 1 litre stock, tempeh, sweet potatoes, potatoes and vinegar to the onion mixture.  Season well (as the corn and sweet potato will sweeten the stew).  Bring to the boil and simmer for about 10-15 minutes until potato is starting to soften.

While stew is simmering, make the dumplings by mixing all the ingredients together.

Once potatoes are softened add in corn and kale.  Bring to the boil and then reduce to a simmer.  Drop in dessertspoons of the dumplings and simmer for 15-20 minutes.  They should look fluffier and you can test one by cutting it open and checking it has cooked.

If you want to make the stew without dumplings, you may need a spoon or two of cornflour towards the end to thicken it slightly

On the Stereo:
Fearless - Taylor Swift
Posted by Johanna GGG at 10:30