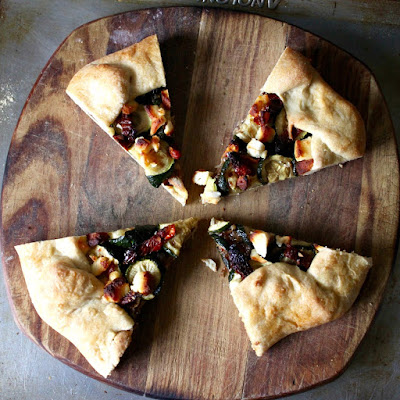 It has been one of those weeks.  Some good.  Some bad.  I met an old friend for lunch in the city.  Sylvia has been sick.  I saw a guy thrown off his motorcycle when I was riding home.  I picked up a pair of new glasses.  It was a week when it took a while to find time for making a galette and when it made for very welcome leftovers. 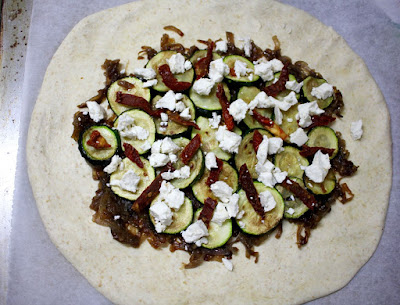 The galette used some pastry I had previous used for a beetroot and caramelised onion galette.  Sylvia had asked that I make it because she had enjoyed her pizza sauce and cheese version.  I wanted to try a new filling this time.

The pastry was made with the same recipe but seemed even softer and stickier this time.  I was not very confident in it.  Much like the first time (check out the beetroot galette for step by step photos).  The dough was more like a thick paste than a soft dough.  It was so soft I could not really knead it but I did manage to pat it into a wibbly ball.  I also worried it did not have any baking powder.  The result when cooked was a soft pastry that was almost like a soft bread.  Really lovely. 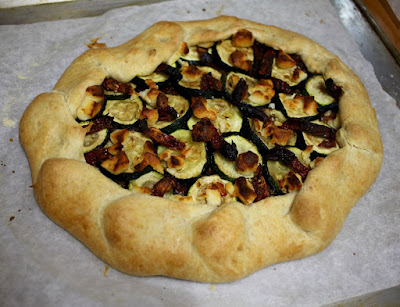 The first time I made the pastry, I tried a zucchini and tomato galette but the raw zucchini would not cook.  Frying the zucchini first worked really well.

I originally planned to make the galette on Sunday.  But Sylvia was tired after a sleepover birthday party and I was full after eating scones with jam and cream at my bookclub.  (Less impressive was my attempt at a muesli slice which would not hold together and ended up being crumbled over yoghurt.)

Then I planned to make it during the week when I wasn't working.  Except Sylvia was at home sick and I spent time visiting the doctor and buying medicine at the chemist and convincing Sylvia to take her pills rather than cooking dinner.

The pastry I had made earlier sat in the fridge.  So the next morning before work, I fried onions.  Which meant once I came home I just had to push the onions to the side of the frypan and fry the zucchini, assemble the galette, and bake it.  I loved it but it was quite soft in the middle when out of the oven and threatened to collapse in hand.  Whereas once cooled, slices could be picked up. 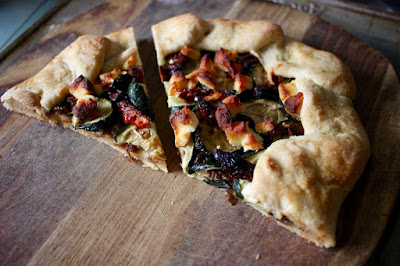 Leftover galette was lovely after a long day that ended with me picking up my new glasses.  When I was greeted to fit my glasses, the guy serving me told me he had just broken his fast.  His comment made me think of how our society has changed.

When I was a child this comment would have been baffling.  These days, especially in the inner North of Melbourne, we are pretty aware it is Ramadam and the Moslem community is fasting during daylight hours.  It is nothing they feel the need to hide or explain.  It was a moment of hope that multiculturalism is making us more understanding of others.

As it is Reconciliation Week, I wanted to highlight a few moments in the news that call for tolerance.

The Uluru Statement: written by Australia's Indigenous leaders to reflect the frustrations and aspirations of the Indigenous community:
"When we have power over our destiny our children will flourish. They will walk in
two worlds and their culture will be a gift to their country."

The Last Leg: I am a great fan of the show and this week was brilliant.  Adam Hills chose love not hatred with his talk on the Manchester bombing.  He talked of poems and songs and pubs.  And he said this:
‘No matter what you do, no matter how many lives you take, we will still help each other. ‘Not because you forced us into it or we’re trying to defy you, because it’s what decent people do.’

Paddy Ashdown spoke about his new book at Hay Festival.  During the talk he said that the world would be a better place if politicians had a better understanding of history:
He said if society parted company from liberal values of “respect, tolerance, internationalism and so on then the next step history shows is something worse”.

I am sending this galette to Meat Free Mondays and Eat Your Greens.

First make pastry: Mix flour and salt in a food processor.  Mix in butter until incorporated to make the mixture look like breadcrumbs.  Mix in yoghurt, water and vinegar until it comes together into a soft mass.  Turn out onto a lightly floured surface.  Use a little extra flour to briefly "knead" until you have a smooth ball.  Wrap in clingwrap and refridgerate for at least 30 minutes.

Preheat the oven to 200 C and line a large oven tray with baking paper.

While the pastry chills, prepare the filling.  Fry the onions in oil for about 30 minutes over medium heat until soft and sweet.  Turn off heat and stir in balsamic vinegar and seasoning.  Also fry the zucchini

Pat or roll out the pastry to about 1/2 cm thickness on the baking paper on the oven tray.  [I only used 3/4 of the pastry - but I think it would be fine to use all of it if your tray is big enough or to make two equal sized galettes.]  Use some flour to keep your hands or rolling pin from sticking.

Spread the fried onions onto the base leaved about 3-5cm around the edges.  Next arrange the sliced zucchini over the onion.  Arrange pieces of sundried tomato and goats cheese over the zucchini.  Fold the edges of pastry over the filling, making tucks as you go so the pastry sits neatly.  It is to be rustic so it does not need to be perfect.  Brush pastry edges with soy milk.

Bake for 30-40 minutes until the pastry is golden brown and the goats cheese  is slightly brown.  Serve warm or at room temperature.  Keeps in the fridge overnight.

NOTES: The previous galette I made with this pastry was vegan with vegan mozarella.  This galette could be also made vegan with a vegan margarine, vegan yoghurt and vegan cheese.  I left my pastry in the fridge overnight.  The sundried tomato was not preserved in oil.  It was quite charred and I wondered if it would be better under the zucchini or to use oiled sundried tomato.