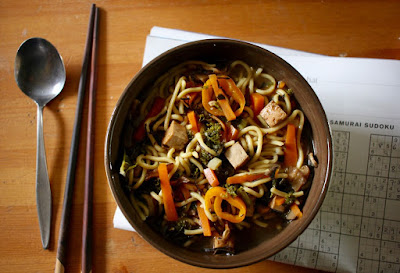 The chilly weather of June has been demanding warming stews, winter woollies and sweet treats.  As ever life is busy but I don't know where the time goes.  Some old favourites have been wheeled out.  Leftovers are always welcome.  Above is a bowl of hearty miso soup that was so good I wondered why it had been so long since I made it.  E and Sylvia didn't want it so I enjoyed it two nights in a row. 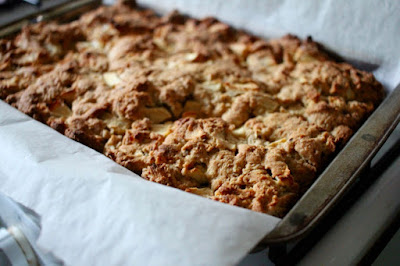 The most popular recipe on my blog is an apple slice. I have made it a few times.  The last time it seemed quite sweet.  I decided to make it vegan by using a flax egg (1 tbsp linseed meal or flax meal and 3 tbsp water) and then I had half white and half wholemeal flour, and only added half the sugar.  It was nice but a bit dry and crumbly. 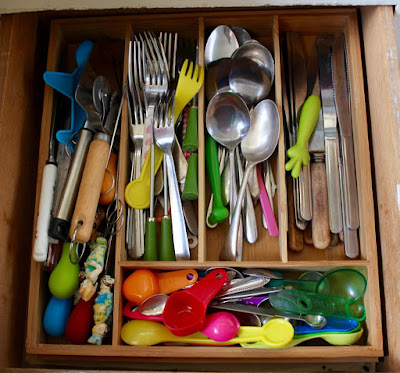 For a long time I have wanted to update our old plastic cutlery drawer insert.  If only I could have remembered to measure our drawers.  When I finally got to the shops with the measurement Howard's Storage World was no longer at Barkly Square.  I ended up getting this wooden insert from K-Mart and it is an improvement.  I wish I had all my cutlery nice and neat but I took the photo in a stolen moment and haven't managed another photo so you will have to take me as I am. 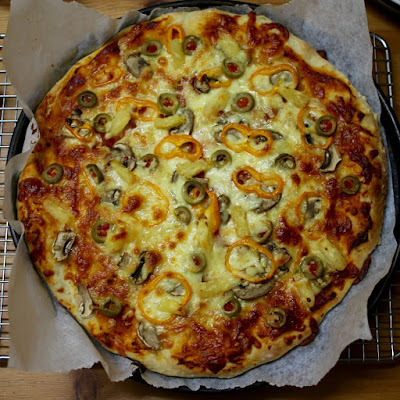 I really loved this pizza because it reminded me of the vegetarian pizzas I used to order down Lygon Street in my student days.  It has tomato sauce, mushrooms, capsicum, olives, pineapple and cheese.  All on a fast track sourdough pizza base.  Great nostalgic comfort food. 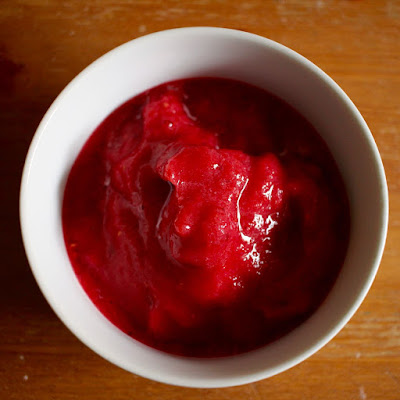 We bought raspberries at the farmers market.  I was told there was only about 2 weeks left of picking them so of course I bought a large punnet.  It went straight in the freezer after my last punnet went off within days.  After Sylvia had been sick I blended frozen raspberries with watermelon and it was like a really lovely sorbet.  Though it could have been a bit sweeter for Sylvia.

Fruit is on the wane at this time of year.  I stewed quite a few plums over autumn but the last batch of plums I bought a few weeks back were so bad I had to throw out most of them.  Now the apples aren't quite as crisp as at the height of autumn and I have started to stew some of them.  I never used to be into stewing fruit but both Sylvia and I are loving it. 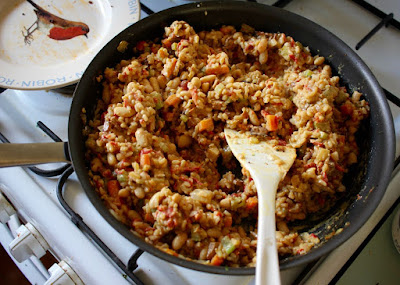 I'd had my eye on a VNutrition recipe for Vegetable Bean Casserole and finally made it for dinner.  I changed around the vegies and added tofu bacon.  It was really good but I baked it in a rush without breadcrumbs and without an opportunity to photograph the final dish. 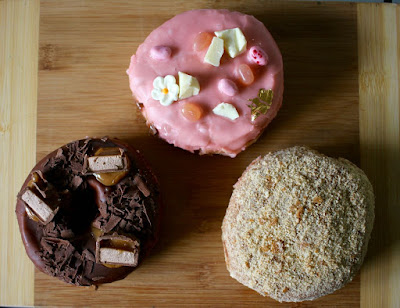 I went shopping on Brunswick Street a few weeks back and dreamed of sitting in the Vegie Bar eating chocolate cake.  Time was short so I bought some Doughnut Time treats to take home instead: Life on Mars (Rich milk chocolate glaze, topped with chocolate flakes and Mars pieces), Kris (Strawberry glaze with strawberry cheesecake filling, milky bar, jelly belly, sugar flower and gold leaf), and It's Always a GayTime (Milk chocolate glaze, crushed biscuits, golden caramelised crepes and filled with honeycomb custard!)  They were really rich and gooey.  I loved the Mars Bar one best. 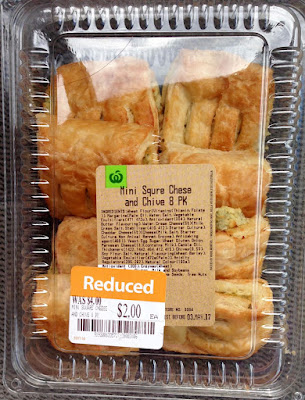 While Doughnut Time is a trendy treat, these Mini Square Cheese and Chive 9 pack from Woolworths are my guilty pleasure.  They cost about a tenth of the cost of the 3 doughnuts.  I confess I have bought them because they are ridiculously cheap when on special for $2 but I find them rather moreish too. 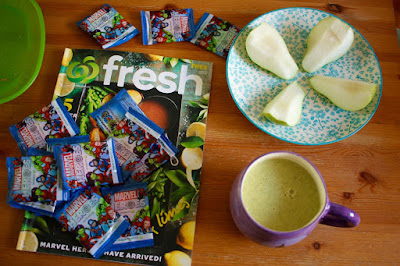 I used up some vegan nacho cheese sauce from But I could never go vegan by blending it with broccoli to make soup.  I found I had to add a few seasonings to get it right, yet it was still a quick way to make a tasty lunch.  Great with crisp pear and a food magazine. 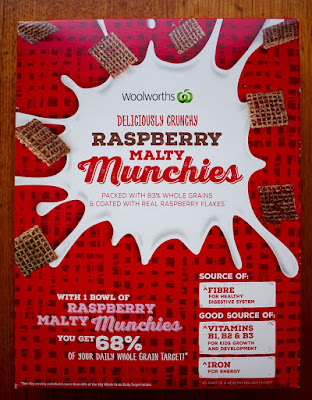 I was interested in these Raspberry Malty Munchies when I saw them on the supermarket shelves.  Sadly I found them too sweet.  So not surprisingly, Sylvia munched through them at some rate.  I wont be buying them again. 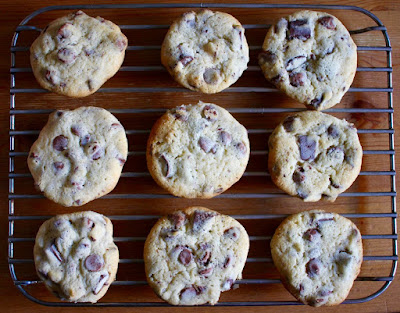 I was interested to try a favourite choc chip cookies with coconut condensed milk.  I made an effort to underbake rather than overbake.  They were nice but a wee bit soft and I wasn't sure if it was that they were vegan or that they could have had another minute or two in the oven.  We loved them nevertheless. 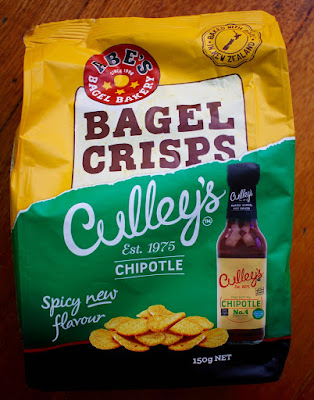 I really like Abe's Vegemite bagel crisps so I was quite curious to try these Chipotle bagel crisps.  Actually I bought them for E who likes all things spicy.  They were a bit crunchy for him but I found them rather moreish. 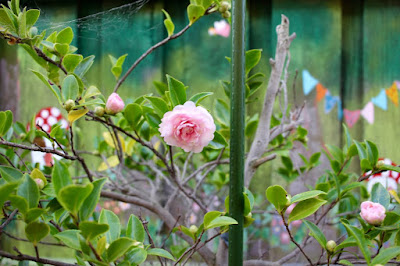 The recently wet weather has meant the garden is green and luscious.  Mostly.  The rosemary is looking scraggy.  The lavender isn't quite recovered from summer.  Some white butterflies have eaten my broccoli but it has bounced back once covered.  The lemon and lime trees have ripe fruit and our camelia has flowered.  Last year it was quite neglected and never flowered over autumn so we were very exciting to see all the flowers this year.  If I get time I will write a post on the garden. 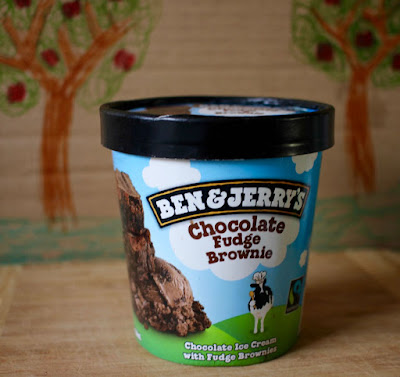 When Sylvia was sick last week I promised some ice cream to soothe her sore throat.  Then I realised I just should not be in the ice cream aisle on the way home from work.  I bought her a vanilla ice cream and this Ben and Jerry's Chocolate fudge brownie for myself.  Thank goodness Ben and Jerry's tubs are not too big.  I could have eaten the whole tub in one night, it was that good.  But I shared it over a couple of nights.

I am sending this post to Sherry of Sherry's Pickings for the In My Kitchen event, that was started by Celia of Fig Jam and Lime Cordial,  If you would like to join in, send your post to Sherry by 10 May.  Or just head over to her blog to peek into more kitchens.
Posted by Johanna GGG at 22:44