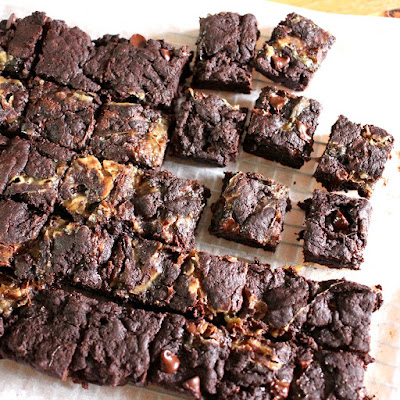 Some foods are easy to veganise and others are more challenging.  Vegan brownies are hard to get right.  I have made a few that are quite sludgy inside.  Actually most of the brownies I have blogged have relied on eggs.  Today I made brownies because I wanted to use vegan choc chips and coconut condensed milk but there were no eggs in the house.  The results were most pleasing. 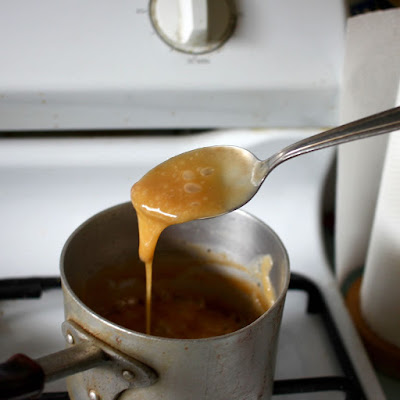 Firstly I decided to marble caramel or dulce de leche on the top of the brownies.  Because I had coconut condensed milk.  I had used half a tin in some choc chip cookies.  The remainder has sat in the fridge for a few weeks.  I simmered the condensed milk for 10-15 minutes and it got so chewy that I had to warm it up to actually spread it on the brownies.  But in the edge result it just added a small amount of chewiness and sweetness to the top of the brownies.  I had meant to salt it but forgot. 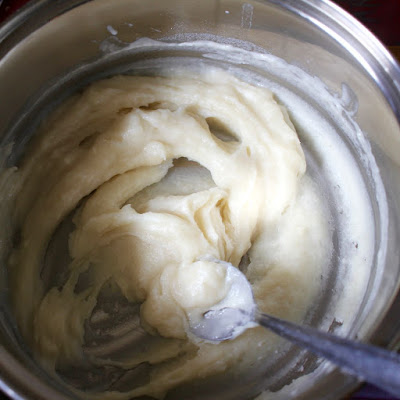 Next is the vegan brownie recipe I have been planning to make forever.  I was intrigued by this recipe that started with a roux of water and flour. 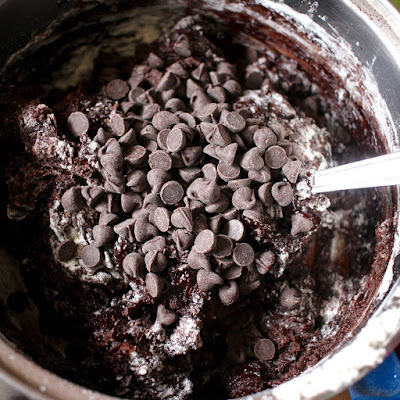 The mixture then went glossy until I added the flour and it thickened up into a mixture that was so hard it was difficult to spread in the tin.  There were lots of choc chips mixed in at this stage.  And I still have more.  (Thanks Faye for the generous donation to my baking adventures.) 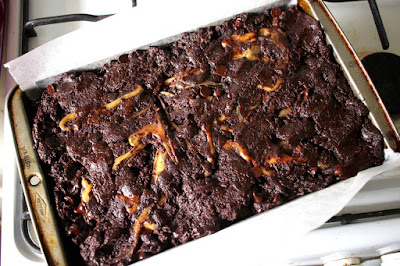 The above photo is of the mixture in the tin with the dulce de leche inexpertly swirled through.  Actually both the brownie mixture and dulce de leche were so stiff that I sort of folded some under like I was tucking it into bed.  I don't think this is the method that any experts would recommend.  It was enough to distribute it.  And once it cooked it looked pretty similar but drier on top. 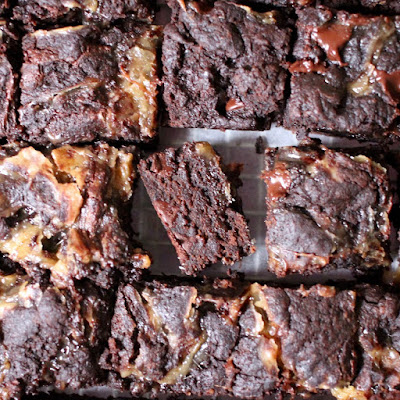 Finally there is the tasting, to make sure these are the best vegan brownies I have ever made and then to just check again and maybe one more after swimming and parent teacher interviews and then perhaps put a lot of the batch in the freezer because they are too tempting to just leave out begging to be eaten!

I am sending these to Jibber Jabber for Love Cake and Tin and Thyme for We Should Cocoa.

Cook 1 cup water and 1/2 cup flour over low heat until you have a gluey paste that holds its shape.  Stir in sugars, salt, cocoa and oil to make a glossy mixture.  Stir in remaining 1 1/2 cup flour and baking powder, then chocolate chips (if using).  Tip into prepared tin and press out to fill tin evenly.  I used my hands to smooth some of it down.

If you wish to use some dulce de leche - I slowly cooked some coconut condensed milk for about 5-10 minutes.  Mine was setting to toffee rather than a sauce so I think let it darken but it does not need to coat the spoon too much.  Dollop over unbaked brownie and swirl a little with knife and then smooth down as much as possible.  (Maybe some salt in the dulce de leche would work.)

Bake for 25 minutes.  a skewer should come out cleanly when inserted in the middle but I looked more at the top being drier and the edges feeling cooked and the middle a little softer but not uncooked.  Cool in tray and then cut into small squares.

On the Stereo:
Big Red Truck: Rubher
Posted by Johanna GGG at 22:55