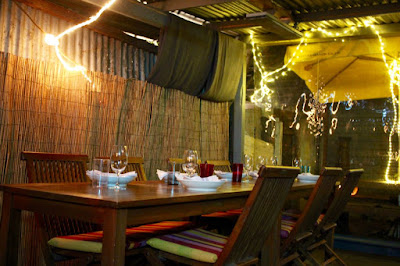 It has been a while since I have gone out for fine dining with the vegan dining group.  However, visiting Easy Tiger two weeks before it closed, seemed a chance for some fine modern Thai food that was unlikely to come again.  So it was that on Saturday night, I met with the group in the covered courtyard of the restaurant.  A pot belly fire roared in one corner, bamboo matting lined the walls and strings of fairy lights add a touch of fun.

We chose the vegan Tiger Banquet for $95 each.  This involved a volley of street food dishes - "small bites that arrive one after another, building your appetite", and then rice courses - " a banquet feast that arrives all together and is eaten together on the plate", and finally dessert.  I regret to say that I did not take notes, nor extensive photos.  (Thanks to Cindy for some help with remembering.)  So there are some gaps in my tale of the meal but hopefully it is enough of a snapshot to remember the fine food at Easy Tiger. 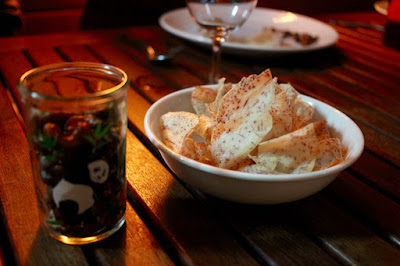 We started with Taro crisps with chilli salt and a cute panda glass of soy roasted cashews.  The crisps were light and crunchy but I could have just inhaled that glass of tasty nuts.

It was most impressive that there was a non-alcoholic drink matching for the banquet.  I was tempted but heeded Cindy's wise advice that it was quite filling.  So I chose one non-alcoholic cocktail: the Yuzu Soda which was made of yuzu citrus, soda, sugar syrup and lemon.  It was quite tart at first mouthful and then wonderfully refreshing.  I was also tempted by the lemongrass and ginger soda. - 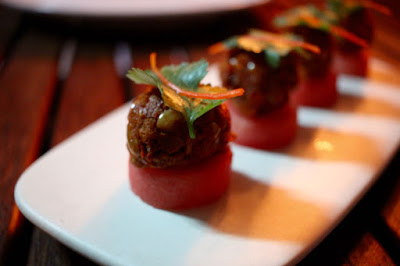 The Vegan Ma Hor looked so cute it was a shame to eat it.  I think the bulk of the bitesized "meatballs" on top of the watermelon discs were peanuts.  I really liked the contrast between the nutty and spicy with the fruity and sweet.  Though they were quite small, they were still quite a mouthful. 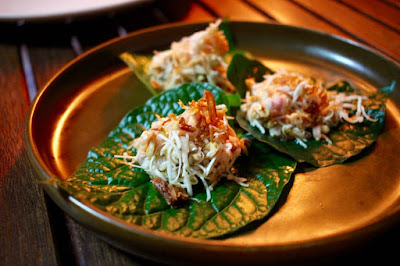 More of a challenge to eat were the Betel leaves with coconut, puffed rice, peanuts and fried shallots.  These were really good with lots of crunch and flavour.  (Cindy noted that she tasted lime.)  They were quite fun to wrap into little betel leaf parcels and eat.  However I found myself with the sweet sticky sauce running down my hand. 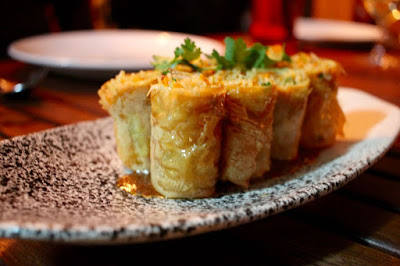 One of my favourite dishes were the Fried beanskin pastry stuffed with glass noodles, garlic chive, ginger and coriander.  These were so satisfying with the crispy fried skin and the mouthful of seasoned soft noodles.  It makes for perfect comfort food.  I was very glad we had two each as I really wanted more after my first one.  They were 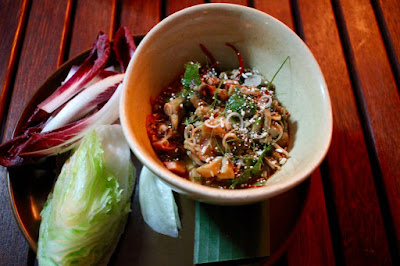 Neither online information or my memory can help me here.  So I will call this dish Braised mushrooms with lettuce.  (Apologies to Easy Tiger if I am totally wrong.)  However to paraphrase Shakespeare, a mushroom by any other name would taste as good.  I am not a huge mushroom fan but I really loved this and went back for seconds and thirds.  We tried wrapped the mushrooms in the cos and radicchio lettuce on the side with varying degrees of success.  My plate was testimony to my poor wrapping skills.

This dish was really tasty with some chilli and kaffir in it.  I ate a piece of chilli and so had that unpleasant burning mouth sensation.  After that I neatly placed the thin strips of chilli at the side of my plate.  I had quite a pile.  However the chilli seemed hit and miss.  Others hardly got any chilli.  It did not dampen my enthusiasm for the dish. 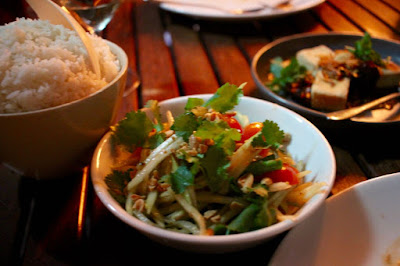 Next was the Rice courses or Banquet feast.  The table was crowded with dishes of lots of interesting and delicious food.  Above are the side dishes of Green Papaya Salad with Snake Beans, Tofu in chilli jam and Jasmine rice.  All very good without making me go weak at the knees. 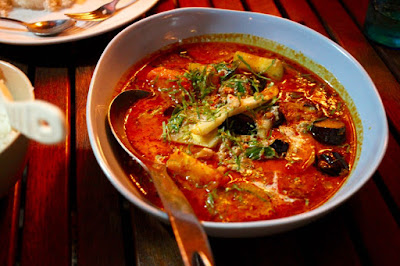 The main dish was this Penaeng curry of lebanese eggplant with tomato and braised fennel.  It was introduced to as the hero dish and I would not argue with them.  It was magnificent.  Rich, creamy and subtly spicy with eggplant cooked to perfection so it melted in the mouth.  Our main complaint about it was that we would have liked more eggplant.  It is not often that it is cooked so beautifully. 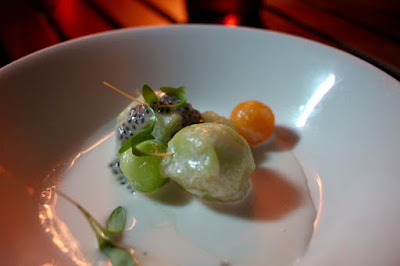 Then it was time for dessert of Coconut & pandanus dumplings with melon and salted coconut cream.  The dumpling skins had crunchy toasted coconut inside and sago over them.  I confess to wishing the vegan menu had the regular chocolate filled dumplings.  While I love coconut, the sago and melons weren't really my thing.  To be fair, I probably would have enjoyed this dessert more in summer but it was fun to try it.

The meal was finished off in style with some sweet, salty, sour, spicy boiled lollies (hard candies).  They were more sweet at first and then the chilli hit and my tastebuds just withdrew from the burn.  We decided it was like a Willy Wonka sweet that he was trialling.

It is a shame it took my so long to visit Easy Tiger but I am glad I did.  The food was wonderful and will raise the bar high for the next Thai restaurant I visit.  The staff were friendly and attentive and I liked the simple ambiance of the courtyard.  It was great to catch up with some people I haven't seen for a while and I was sorry that Rosalie could not come as she had organised the meal but you can read her review of her previous visit at Quinces and Kale.

Easy Tiger is open until 16 June and then will close its doors on over 6 years of feeding modern Thai food in Collingwood that has managed to be both stylish and filled with flavour.