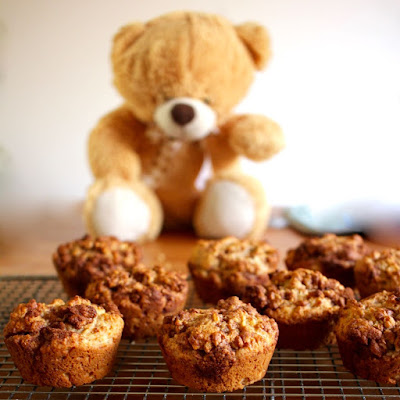 It was 4 o'clock on an autumn afternoon.  We had not had lunch because our brunch at The Snug was so filling.  I was happy that I had bought some tubs to organise Sylvia's clothes, a bouncy ball for her to play with (outside only please), and a tunnel for Shadow the cat. These cinnamon doughnut banana muffins with a cuppa were just what we needed. 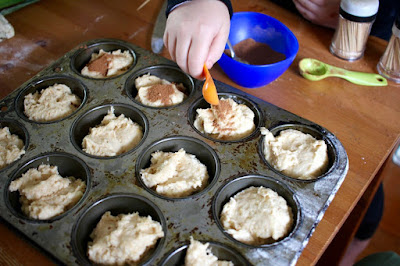 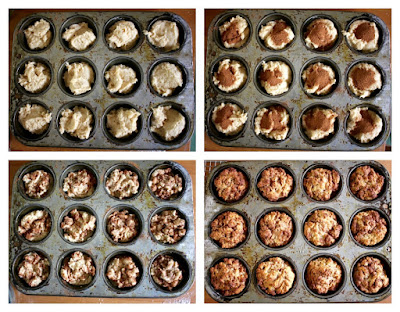 I have seen recipes for jam doughnut muffins with jam inside and the muffins rolled in butter and sugar.  The recipe in Coles Magazine was fine but it had more eggs, butter and sugar than I wanted.  I altered a recipe for vegan banana bread I found online that used less sugar and substituted oil for butter. 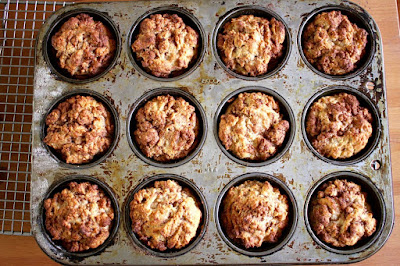 I took out some of the sugar and used it to make cinnamon sugar.  We sprinkled it on top and stirred it in with a toothpick.  It made the muffin tops slightly nubbly.  Of course you could mix the sugar and cinnamon into the batter but this way the muffins hit you with the heady aroma of cinnamon doughnuts.  In fact, E did not even realise that there was banana in the muffins.  I really liked it this way. 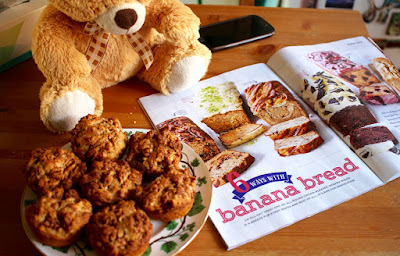 Lastly I have been watching the local show, War on Waste.  It is a really interesting look into the stuff we throw out, what happens to it and how much of it is really necessary.  In the first episode, Craig Reucassel, visited banana farmers in Queensland to discuss the mountains of bananas thrown out each day.  He discovered that the regulations on what supermarkets accept are really tight and mean lots of bananas are too big or too small, too bent or not bent enough.  It is quite shameful.

I usually list how many bananas are needed in a recipe.  This program made me think that if the regulations were relaxed, there would be a far greater variation in bananas and it might change how we write recipes.  No big deal of course.  Banana bread would still be delicious!

Firstly make cinnamon sugar by mixing sugar and cinnamon.  Set aside.  Mash bananas in medium mixing bowl and mix with brown sugar and oil. Mix in flour and baking powder.  Spoon into greased 12 hole tin.  Sprinkle generous 1/2 teaspoonfuls on top of each muffin and swirl into mixture with a toothpick.  Bake at 200 C for 20 minutes or until golden brown and passes the skewer test.

On the Stereo:
Fearless: Taylor Swift
Posted by Johanna GGG at 09:35