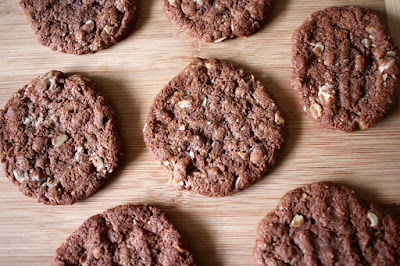 I didn't have the energy for the ANZAC Day Dawn Service this year so instead I baked bread and ate a fresh loaf with butter and honey at a friend's house.  Then I left Sylvia there to play with the kids while I went grocery shopping.  I wheeled my trolley around the aisles, laughing at all the Aussie products on prominent display: ANZAC biscuits, Tim Tams, BBQ shapes.  Then I fell for the patriotic hype anyway and purchased a tin of milo to make a quirky take on the traditional ANZAC biscuits. 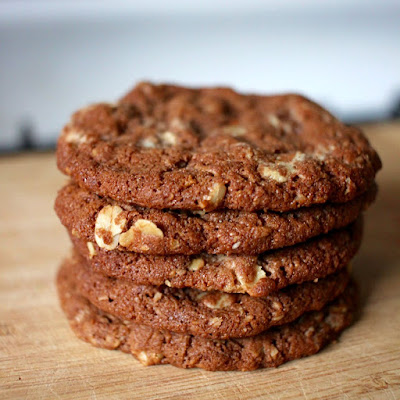 I must remember not to add choc chips to ANZAC biscuits.  When you add the hot butter and golden syrup mixture the choc chips melt.  I've done that before.  I took out a little flour to compensate for the milo but it make the biscuits flatter and crispier.  Especially the first batch.  I left them in too long (12 minutes).  They spread so much that they came out of the oven as one big biscuit.  I spaced the second batch (in the photos) far more generously.  I took them out earlier (8-9 minutes).  They had more chew than crunch.  However I have changed the flour back to 1 cup rather than the 3/4 cup I used as I want them less flat next time.

I really liked these biscuits.  They weren't really chocolatey but I liked the little extra flavour and the occasionally marbling from the white choc chips.  (Milo is quite a mild chocolate malt powder and doesn't add heaps of flavour.)  Just don't tell the traditionalists that I messed with their recipe.  I don't want them to throw me in prison before I have a chance to experiment more.

I am sending these bikkies to Choclette for We Should Cocoa.

And for more, go to my list of Aussie recipes

Roll into walnut sized balls and press down slightly with a fork on a lined baking tray.  Leave plenty of room around them as they will spread quite a lot.

On the stereo:
Molly: Do Yourself a Favour: soundtrack to the television series
Posted by Johanna GGG at 14:54