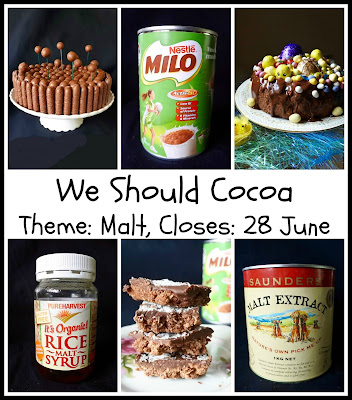 Welcome to June.  It is hard to believe we are hurtling towards the middle of the year.  You probably need some chocolate to face it.  And so I am pleased to announce that this month I am hosting a long running blog event called We Should Cocoa that is run by Choclette of Tin and Thyme.  Each month bloggers are invited to send in posts on recipes featuring chocolate and a monthly theme.  This month I am asking for recipes featuring chocolate and MALT.

Malt? I can see a few quizzical expressions!  I initially dreamt up the theme thinking about my dad's favourite malted milkshakes and Australia's favourite chocolate malt drink called Milo.  Or similar powders such as Horicks and Ovaltine.  I even fancied lots of recipes featuring Maltesers (or Whoppers if you are in America).  But the more I thought the more I started to see malt everywhere.  In a bottle of single malt whiskey.  In the malted glaze on bagels.  In Rich Tea Biscuits and Malt o Milk biscuits.  In malted grains in breads.  In the malted barley in beer.  Did you know that some gluten free beers use malted buckwheat!  I even saw a vegan malted milk recipe featuring Maca powder.

Back in early twentieth century malt extract was given to working class kids in Britain to boost their health.  When I was a child, a glass of milk loaded with Milo was my idea of decadence but now I find malt quite a comforting flavour.  This month I challenge you to dream up fun ways to marry chocolate and malt.  I look forward to lots more malty inspiration and I hope you will have fun.

How to get involved:
And do check out Choclette's round up of last month's chocolate and oat recipes.

The entries so far: