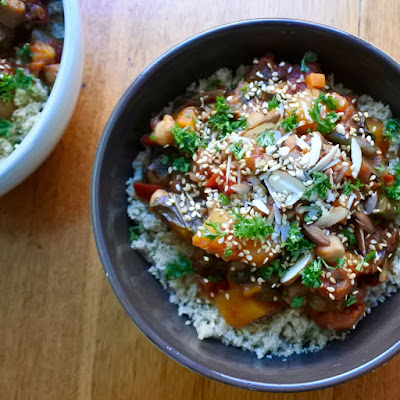 The Age newspaper says that we are experiencing a cold snap right now.  We are eating lots of soups and stews that last for a few nights.  One of these is a pumpkin and apricot tangine that I have had bookmarked for far too long.  It was a hearty stew that is perfect for this weather. 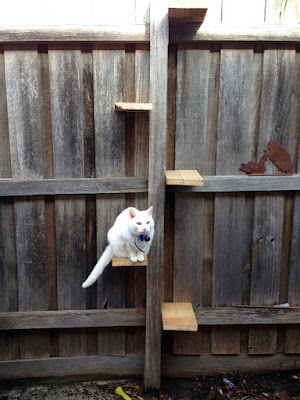 Before I tell you about the stew, let me say that it was great to have a weekend without many plans.  It opened us up to impromptu activities.  Firstly my dad rang to say he and my brother would help with making some cat steps that we had be discussing.  Our cat Zinc is getting old (14 years) and sometimes gets up on the fence and seems unsure of getting down.  We hope this might help.  She seems a bit unsure of the steps but hopefully they will be useful next time she finds herself on the fence.  And if not, then I am sure E will appreciate somewhere to put his cuppa.

Today I read chapters of Harry Potter to Sylvia during the day, had a bike ride and took Sylvia's bike for a ride.  It has been a while since she has ridden her bike what with one thing and another.  I hope we might have some bike riding now that we are into the school holidays.  We found that the back tyre was quite flat and took the bike to the petrol station to pump it up.  Now she is all set. 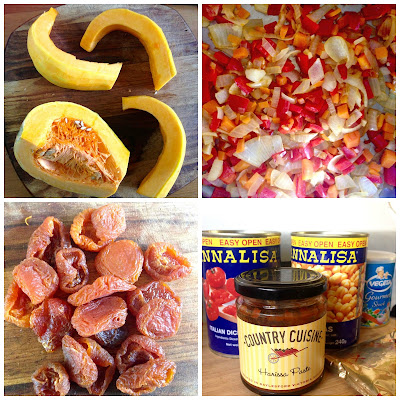 Sylvia is quite keen to bake.  I hope we might do some baking over the holidays.  Our days are already filling up and these days I have to make sure that there is time to just hang out at home.  Unfortunately she is not into making dinner, though she is quite good at putting together a platter of bikkies, hummus and vegies. 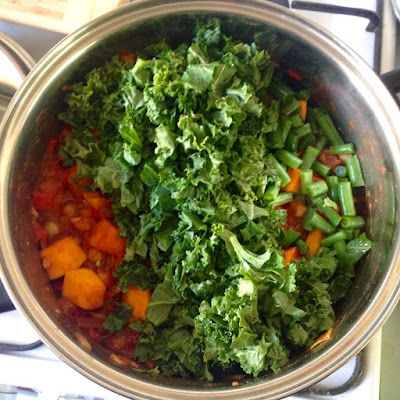 She is very fond of dried apricots but not in savoury food.  I quite like dried apricots in savoury dishes.  It was the reason I was initially attracted to this recipe.  The apricots contribute to the flavour rather than appear as sharp sweet fruity nuggets of flavour. 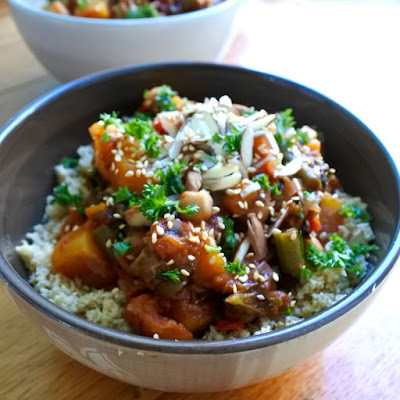 Like many stews, I enjoyed this more the second day, though I made more of an effort with garnishes the first day.  I wasn't sure I got the seasoning exactly right, because the apricots and pumpkin made it so much sweeter after cooking that it wasn't easy to taste until done when it can be harder to adjust.  However the tagine was packed with lots of vegies and lots of flavour that kept us enjoying it across a few nights.

I am sending the tangine to Jac for Meatless Mondays, Kimmy and Mary Ellen for Healthy Vegan Fridays and Corina for Cook Once Eat Twice

Fry onion for about 5 minutes over low heat or until translucent.  Add carrot, red capsicum and garlic and fry for another 15 minutes until vegetables are soft.  Stir in spices and pumpkin.  Cover and sweat for 5 minutes.  Add remaining ingredients and simmer for about an hour.  (Note that the seasoning should be tasted at the end rather than the start of simmering because the pumpkin and apricot will release sweetness as it cooks.)  Serve on couscous with nuts, seeds and parsley.

On the Stereo:
Sergent Pepper's Lonely Hearts Club Band: The Beatles
Posted by Johanna GGG at 23:13