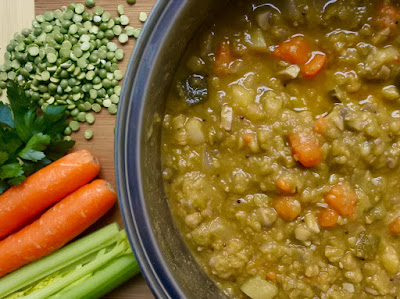 The solstice is upon us and winter has well and truly set in.  What better way to keep warm than with a bowl of split pea soup.  It is one of my favourite winter comforts.  I was glad of it this cold weekend.

It has been an odd year for us.  We had a warm summer followed by a plunge into the chilly climate that is the Scottish Spring and then back to a very mild autumn in Melbourne.  Cruelly the temperature did not drop significantly until the last week or two of autumn.  When we were faced with cold temperatures, wind and rain.  In fact last weekend I was so cold at my parents house that in the middle of the night I had to turn on the electric blanket. 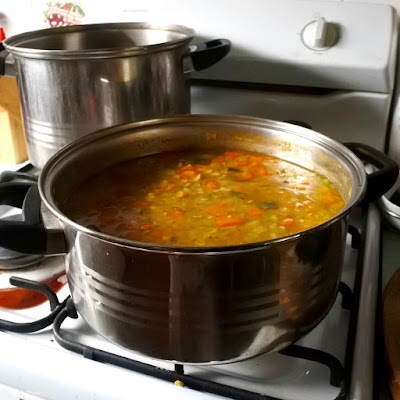 Here in our home we have taken out a large warm blanket we often put on the bed in winter.  Ever since my nose has been running like a tap and I assume it must be the dust in the blanket.  Tonight it is hanging inside after a spin in the washing machine and a day out on the line.  I hope this will deal with my dust allergy.  (Though I always think this a very odd allergy given that surely everyone reacts to dust!) 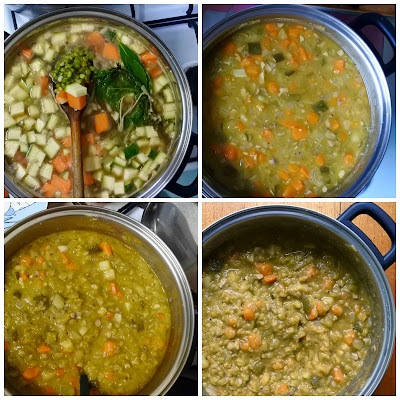 I made the soup on Thursday when seeking some inspiration for dinner.  Usually I make split pea soup with onion, carrots, celery and potato and at the end I blend it to be smooth.  I always thought split pea soup was smooth, despite my mum adding chunks of ham to it when I was a kid.  When looking at split pea soup recipes online I noticed that many people didn't blend theirs.

So I set about making a split pea soup with more vegies than usual - sweet potato, courgette and mushrooms.  It meant that I could use up lots of vegies from the bottom of the fridge, something I don't usually do with split pea soup.  And it was brilliant.  At first I thought I had used too much water.  Within hours it had thickened and by the next day it was even thicker.  (See photos in collage above.)   Most of the vegies and split peas broke down a lot but I liked the slight texture of the mushrooms.  And it still had the great comfort of split pea soup.  The soup is great with bread, with some leftover rice stirred through it or just as is. 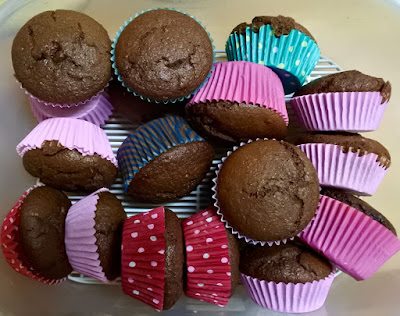 This weekend has been quite a split pea soup weekend.  We had planned to go to Fitzroy Market and then to an outdoor Winter Solstice celebration.  But we were snuffly and it was wet and cold outside.  So we bunkered down with a bowl of split pea soup.  Today I baked bread and made lemonade with lemons from our tree.  Sylvia asked me to make recipes from her cookbook so we made her choice of cheese twists and chocolate cupcakes.

The chocolate cupcakes were a lesson in making do for Sylvia.  She was great at following the recipe for the cheese straws but I think finding that I kept veering off course from the cupcake recipe was a bit unsettling.  I said we could make them but we didn't have any butter or margarine left so I used oil.  Then I used some old milk chocolate chips that seemed hardy enough to withstand a nuclear explosion and would not melt.  I reduced the sugar from 400g to 250g and upped the flour from 250g to 350g, and then added some cocoa and wheatgerm. 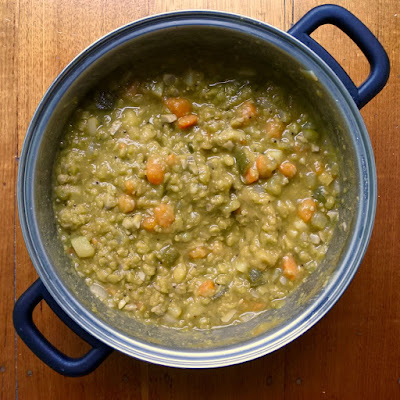 I think the cupcakes have worked but am still not 100% sure.  I love the feeling of having plenty of bread and cake to face lunches for the start of the week ahead.  If only we had not finished the split pea soup it would have made Monday's dinner a cinch as well.

I am sending this soup to Lisa for My Legume Love Affair and Kimmy and Mary for Healthy Vegan Fridays.

Heat the oil over medium low heat and scatter mustard seeds in it.  Leave a few minutes until they start to pop.  Add in onions, celery and carrot and fry for about 10 minutes.  Add mushrooms and fry another 5 minutes.  Add sweet potato and fry another 5 minutes.  Stir in garlic and smoked paprika.  Add remaining ingredients and simmer for about 1 hour.  (Note that it will be a bit on the salty side because once the vegies cook they sweeten it.)  I think I could have done about 10 minutes less but wanted to make sure it was all nice and soft.  When the heat is turned off remove bouquet garni.  It will initially look like a thin soup but will gradually thicken up.

On the Stereo:
Reading, Writing and Arithmetic: The Sundays
Posted by Johanna GGG at 22:47