The Vegemite burger and random notes 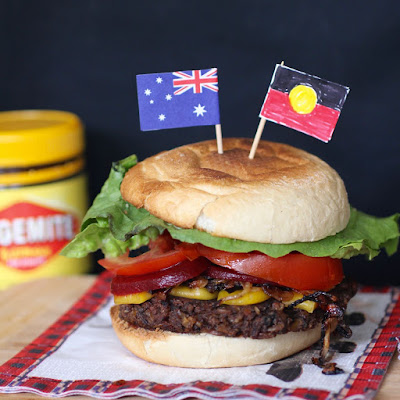 One of the best fast food burgers I ever had was from Burger King on a trip there in 1996.  They no longer do the burger.  So I am always on the look out for a copy cat recipe.  Hence my interest in the vegan Burger King by Mouthwatering Vegan.  Then I saw the marmite and chili quarterpounder by The Veg Space.  I was inspired to try a similar style burger with vegemite.  It was amazing. 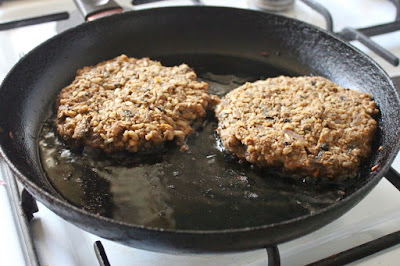 The mixture was both vegan and gluten free.  It was a bit fragile but mostly managed to stay together.  I really loved how much the mixture tasted of vegemite despite me using less than The Veg Space's marmite.  Marmite is a little sweeter after all.  Vegemite is unrelentingly salty as a few unsuspecting foreigners have discovered.  A little is advisable on a piece of toast.  A lot of vegemite works well in the burgers.  It was less discernable in the final product. 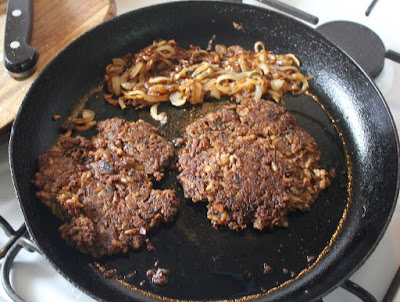 When I was a kid we mostly had burgers as an alternative to sausages at a BBQ.  We would eat them on fluffy white bread with lots of tomato sauce.  However occasionally my dad bought a burger with the lot from a fish and chip shop instead of flake (yep shark in batter).  This was before MacDonalds had hit our shores.  Though I am not sure I ever had one of these burgers myself I still see them in fish and chip shops and get nostalgic for them occasionally. 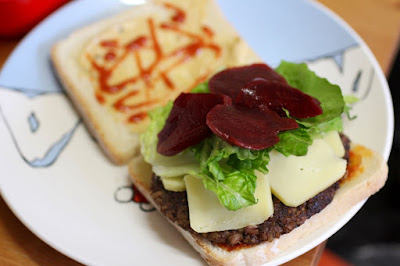 Or perhaps my nostalgia is for when my mum made burgers.  She made me burgers a year or two ago and her way of toasting the buns made me feel quite nostalgic though I don't have strong memories of eating them as a kid.  What I know is that I have a soft spot for the Aussie style of burgers with the lot.  So we ate ours with cheese (Biocheese is a great vegan alternative), tomato, lettuce, tinned beetroot and fried onions.  (With not enough energy to add the egg nor certainty whether pineapple is usually included.)  It also works with toasted bread but it is not as amazing as the buns. 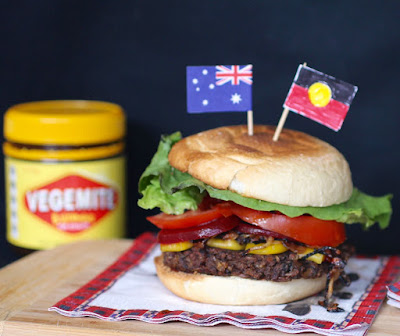 The mixture keeps well in the fridge for a few days.  I made it last week and loved it.  Then I was sick the next day and had to wait to make it again.  We still had some on the weekend.  It was a delicious and easy meal after a hectic day that started with an emergency call to a plumbers and then found us in the afternoon in a supermarket with their EFTPOS and credit card facilities down.  To add injury to insult while we went to get cash from an ATM, someone stole our doughnuts.  We really needed the doughnuts but at least we had the burgers. 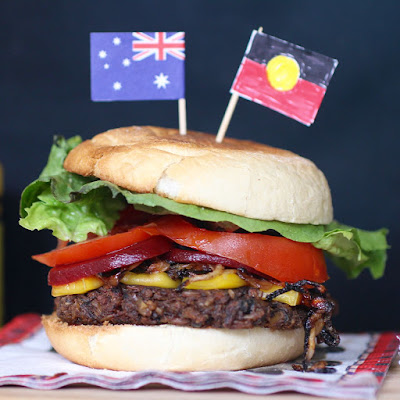 I am sending these burgers to Healthy Vegan Fridays #87, Meat Free Mondays and Cook Once Eat Twice.

Fry onion and garlic in 1 tbsp olive oil over medium heat until softening.  Add mushrooms and cook until any juices evaporate and the mushrooms are dark and aromatic.

Meanwhile mash lentils and brown rice.  Mash in the onion and mushroom mixture once it is cooked.  Stir in the remaining ingredients.  Use hands to shape into flat patties.

Fry burgers in a couple of spoonfuls of olive oil over medium high heat for about 5 minutes or until deep brown.  Flip over, being careful as they can be a bit fragile.  Cook another 4-5 minutes until well browned on the other side.

Serving suggestion: Toast burger buns, (butter if you like it) spread one half with tomato sauce and the other with mayo, melt cheese on burger if desired, pile buns with burger, cheese, lettuce, tomato, beetroot, fried onions and eat with a hearty appetite.

On the stereo:
Folk Music in America:  Vol 13: Songs of Humour and Childhood: Library of Congress Collection
Posted by Johanna GGG at 12:35