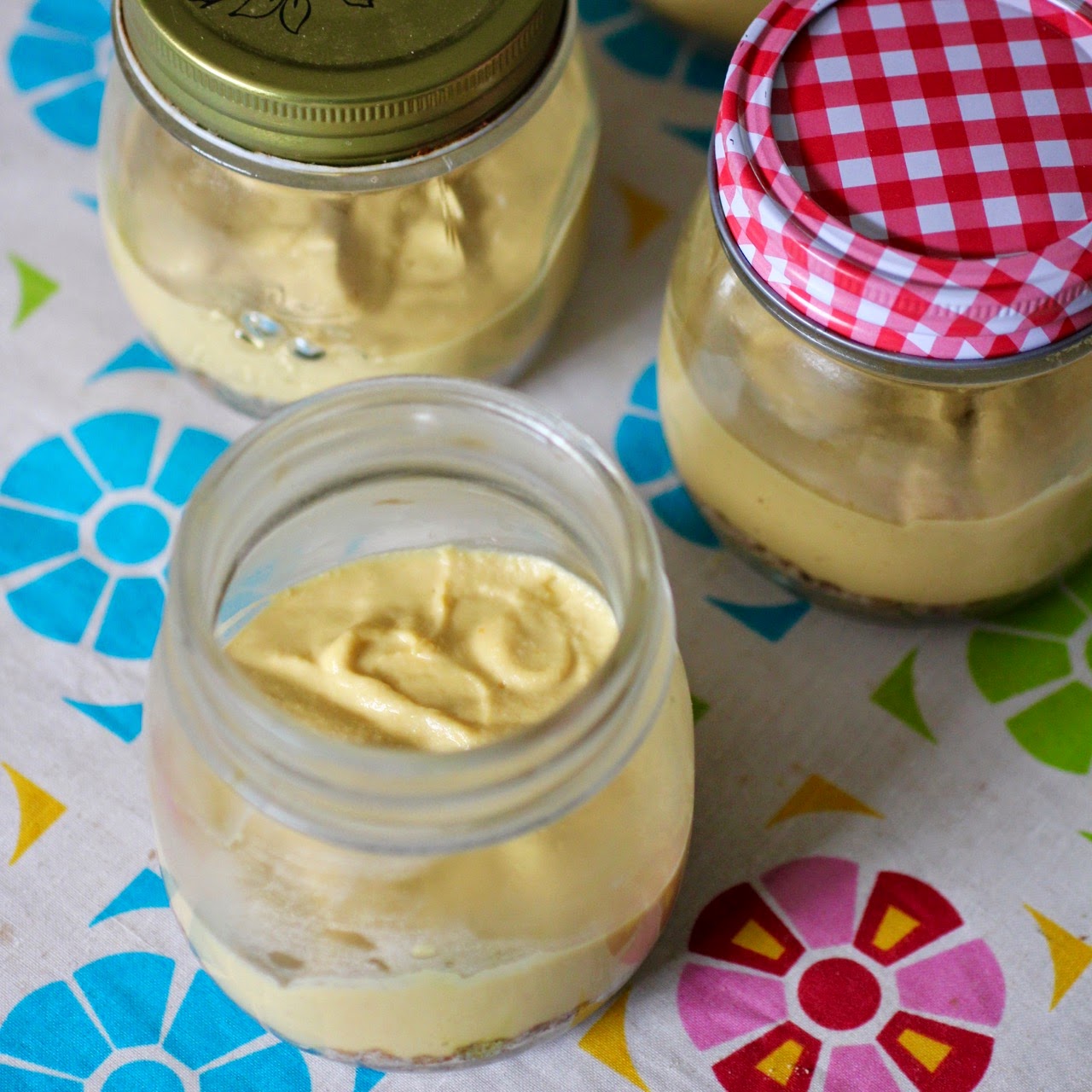 We were short on time for dinner.  I took out a tub of rice from the freezer.  Only, when I opened the lid after defrosting, I found it was the stewed peaches I had earmarked for Kari's Raw Apple Cheesecake Pudding.  Which means it was time to make the cheesecake.  The peaches just wouldn't wait any longer. 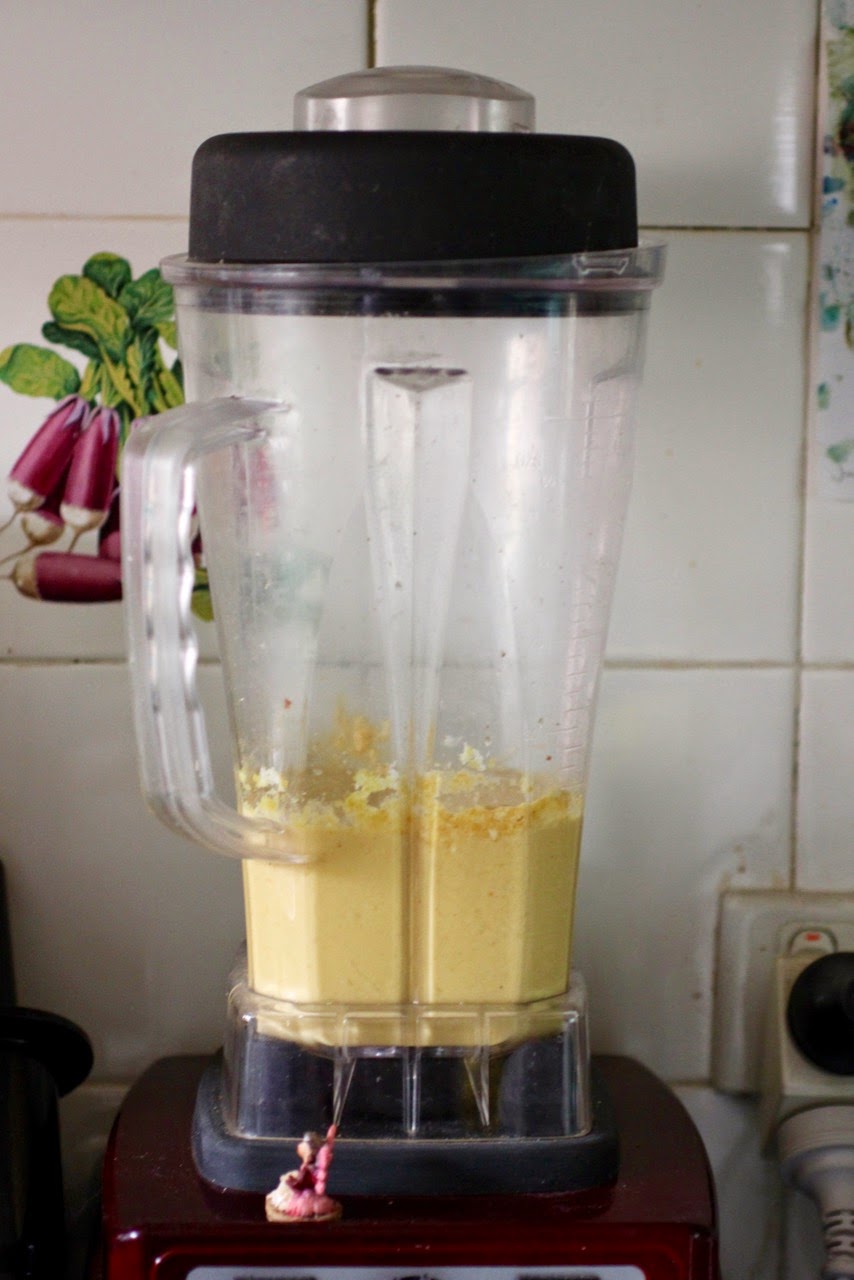 The peaches were stewed towards the end of summer and I had tired of them.  When I saw Kari post her cheesecake pudding, I decided to make it with the peaches.  But the kitchen was busy with holiday and birthday baking.  So I put the peaches away for a day when we weren't inundated by treats. 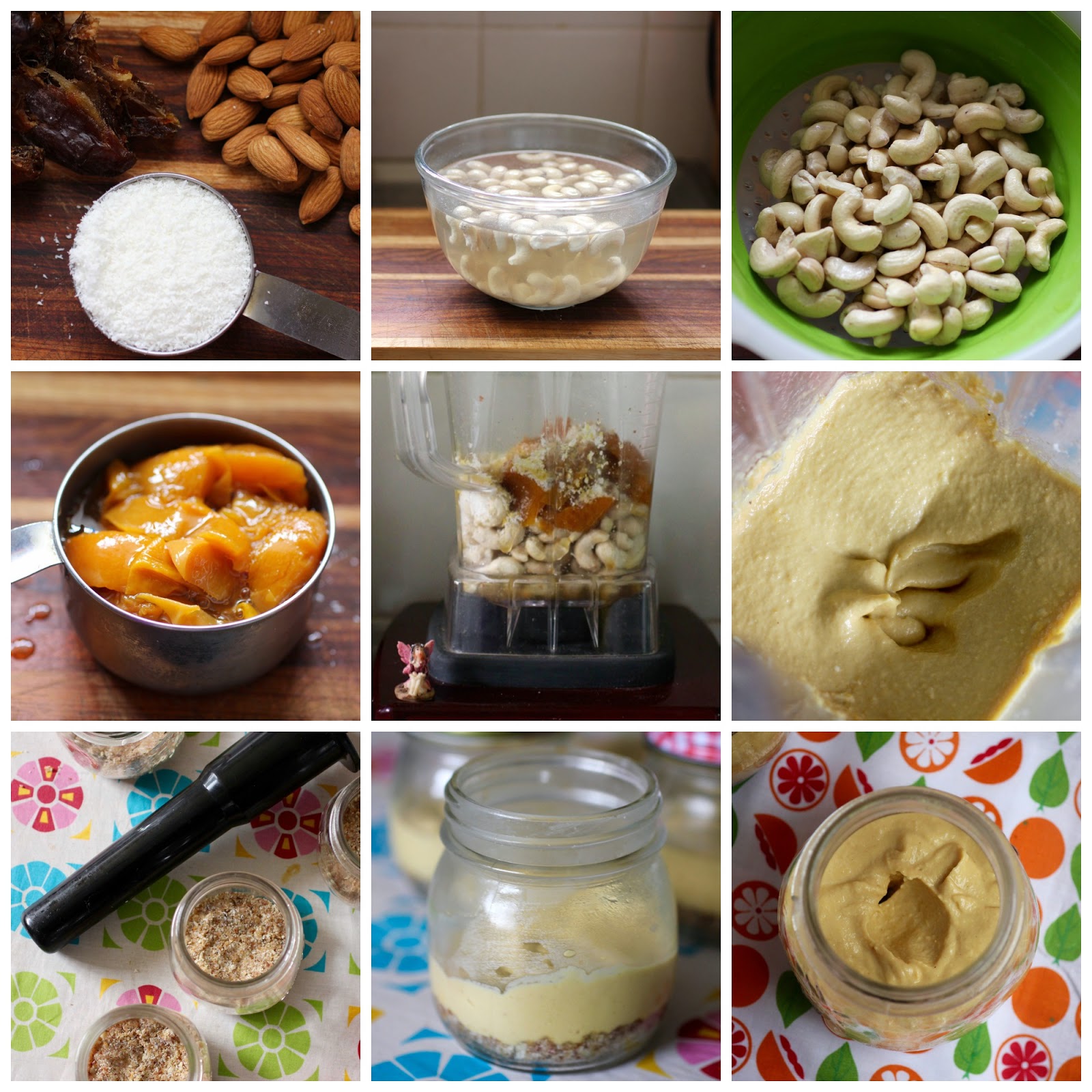 It was easy to make and delicious to eat.  As I am a bit wary of coconut oil, I just added dessicated coconut for instead of oil.  My high speed blender made a very smooth mixture of the ingredients.  Kari preferred a bit of texture which might be why her mixture seems firmer than mine.  Or it might be that she added raw apple rather than stewed peaches.  I added some nutritional yeast flakes and salt for that slightly savoury taste of cheesecake.  It was mostly fruity and creamy but very pleasing.

As Kari noted, it wasn't a set cheesecake so she called it a pudding.  I am happy to call it a cheesecake but enjoyed serving it in jars.  Sadly I didn't have cute little jars like Kari.  Hers was a raw cheesecake but as my peaches were stewed it wasn't raw.  Perhaps I will try it with raw fruit another time. 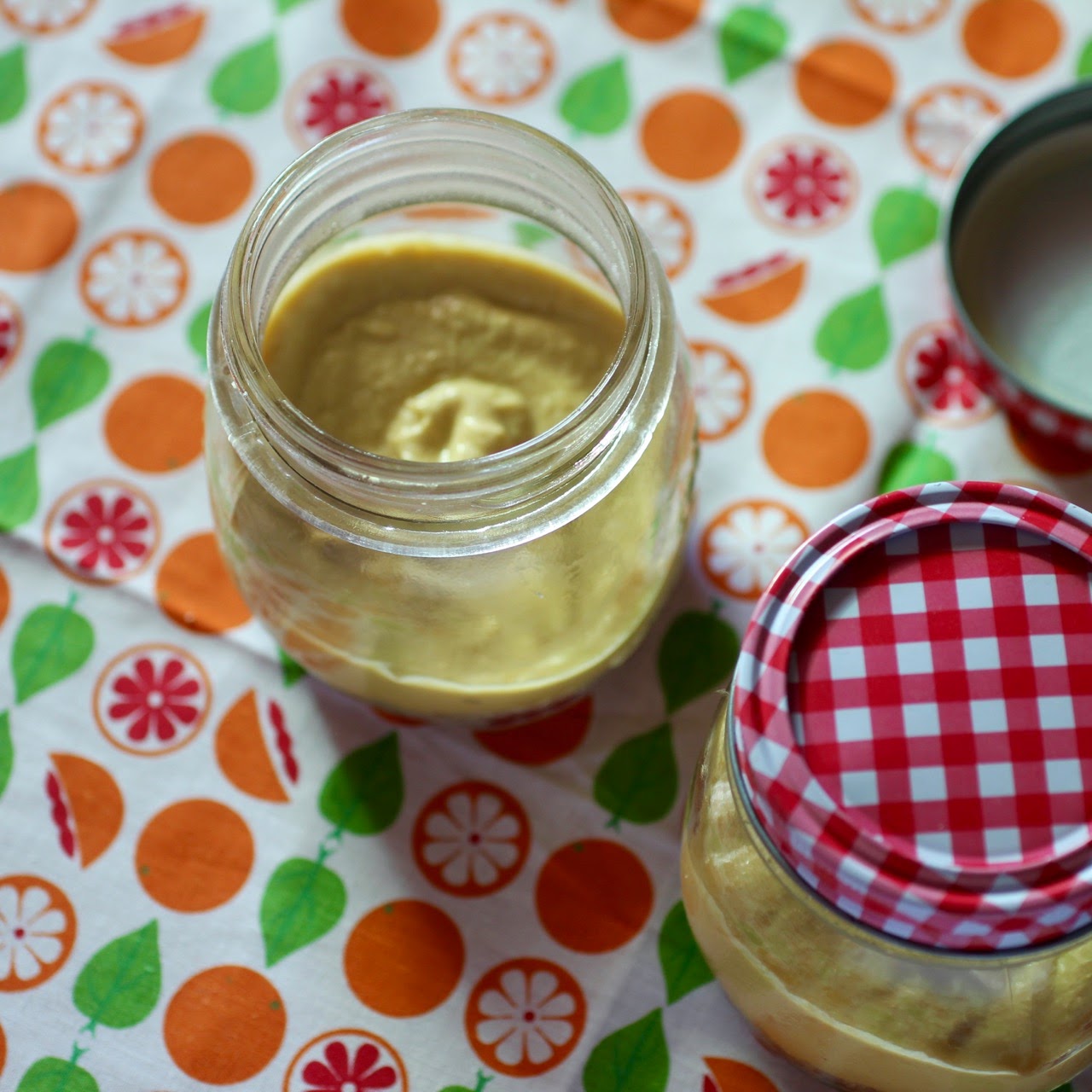 Serendipitously as I made these I was listening to a woman on the radio talking about World Allergy Day (17 April).  They talked a lot about hayfever.  However I thought it relevant as these are dairy free, egg free, and soy free.  There are so many allergies out there.  They are not nut free but for those like my daughter who can't eat peanuts but can eat other nuts, they are fine.

I ate them mostly for breakfast.  They are quite nutrient-dense with all the nuts and dates but they were very satisfying.  Of course, they would also make a great dessert. 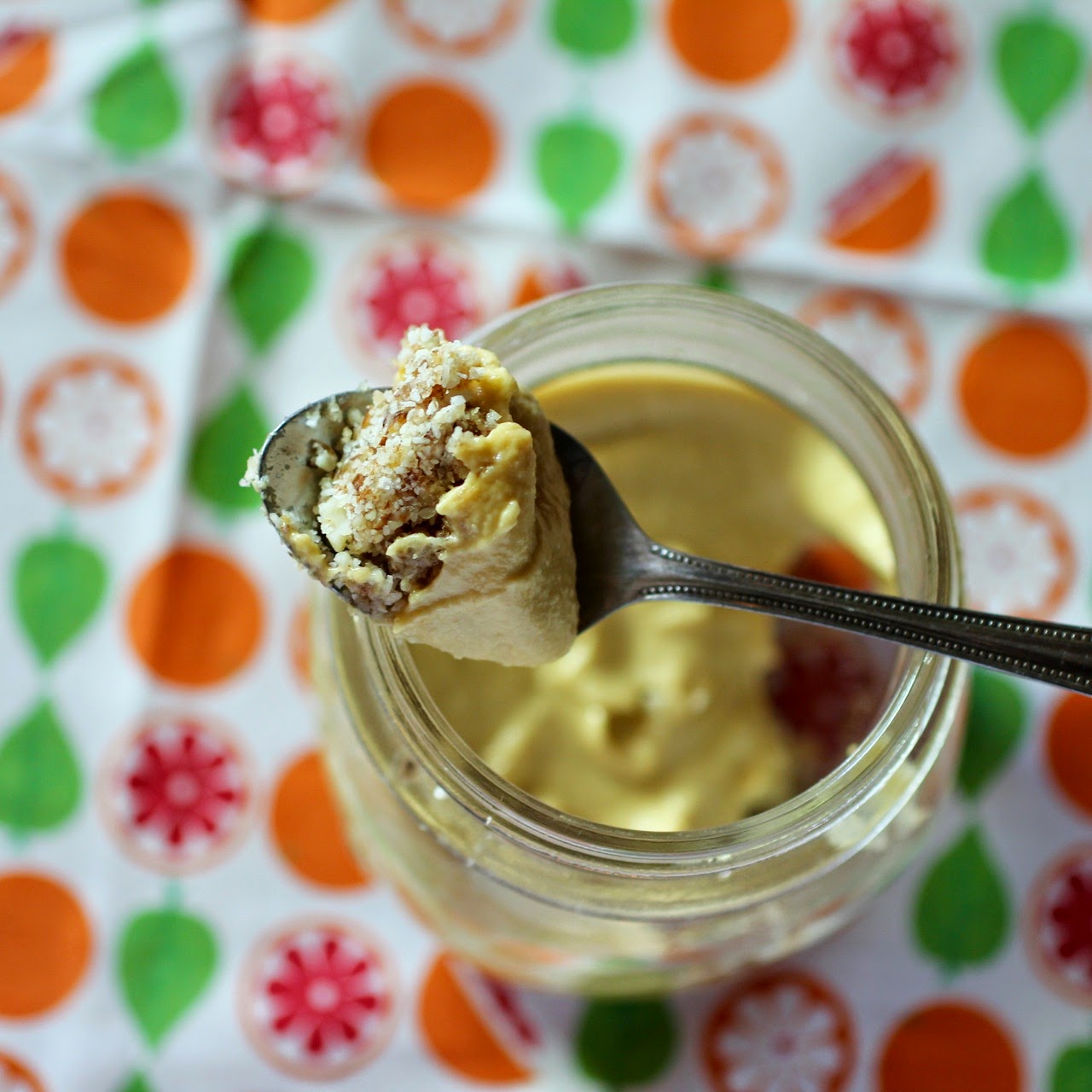 Lastly if you read Kari's post, you will see that she posted this cheesecake recipe as part of her London Marathon fundraising effort.  She has posted lots of great recipes as part of her fundraising for Beat, a UK eating disorder charity.  On Sundahy she runs her marathon.  I wish her best of luck and encourage you to make a donation if you are able to.  And I hope she has some good food like this cheesecake afterwards!

Make the base by blending all ingredients in blender or food processor until it can clump together.  Press into 4 to 6 small jars or glasses.  (I used the tamper from my blender.)  To make the filling, blend all ingredients until smooth.  (A little bit of texture is fine.)  Divide among glasses or jars (and screw lid on if there is one).  Chill in the fridge.  Keeps refridgerated for 5 days or can be frozen to keep longer.

NOTES: My stewed peaches were not terribly sweet.  I made them months ago and could not remember what they had in them by the time I got them out of the freezer - I think they had brown sugar and lemon juice.

On the Stereo:
Studio: Cowboy Junkies
Posted by Johanna GGG at 15:21