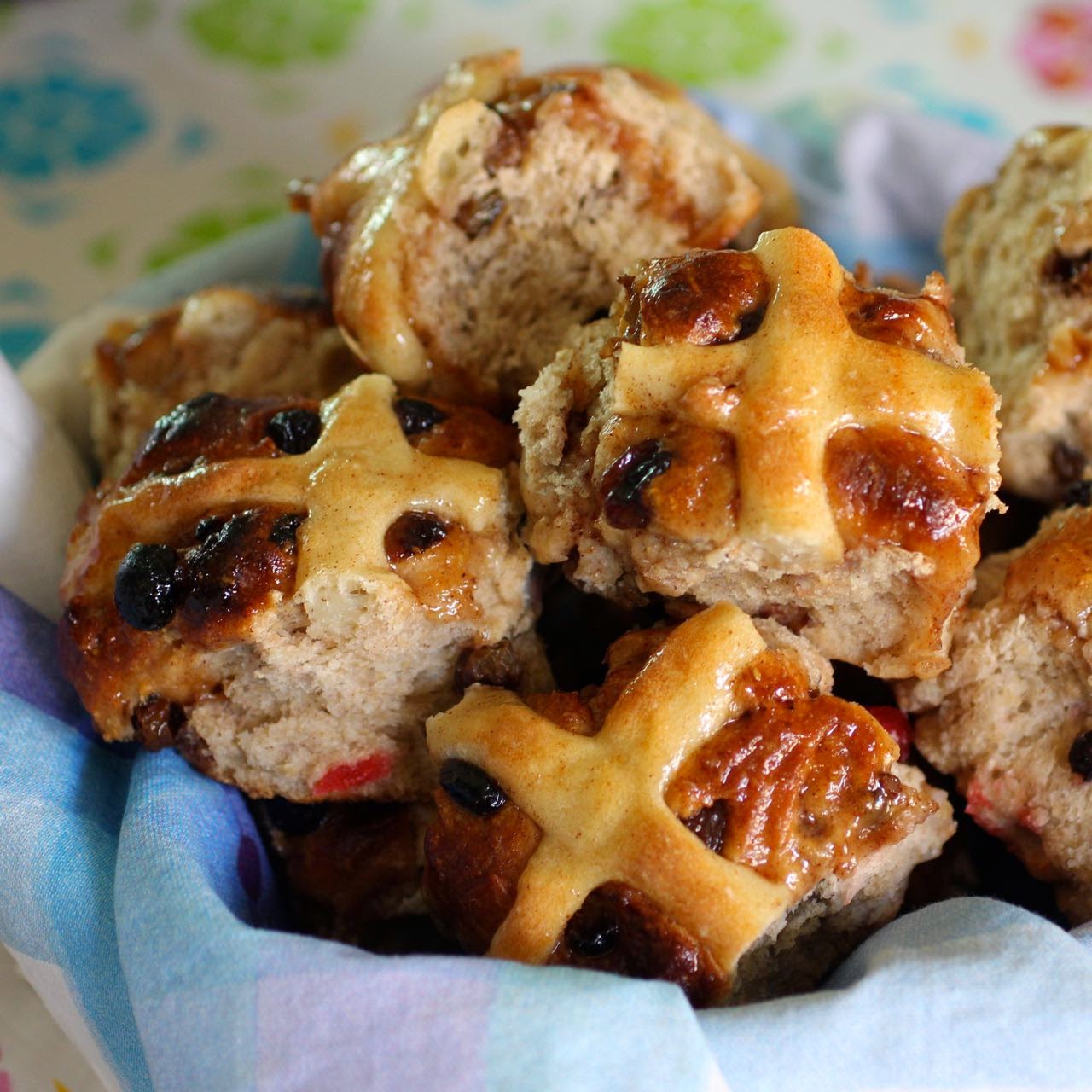 Growing up Catholic, I learnt that Good Friday was a day of sorrow and sacrifice.  We went to church, followed the Stations of the Cross, and kissed the feet of the large statue of Jesus on the cross.  The light of the world went out.  At home we ate fish not meat.  The one bright aspect of the day was warm sticky buttered Hot Cross Buns.  Much has changed since my childhood.  However I like to spend Good Friday at home baking Hot Cross Buns.

If you look at my archives, you will see that I have been posting about Hot Cross Buns every year (with the exception of the year my daughter was born) since I started this blog in 2007.  I have a yeast version that I love.  Yet now that I am making sourdough regularly, I wanted to experiment more with the Sourdough Hot Cross Bun recipe I followed last year. 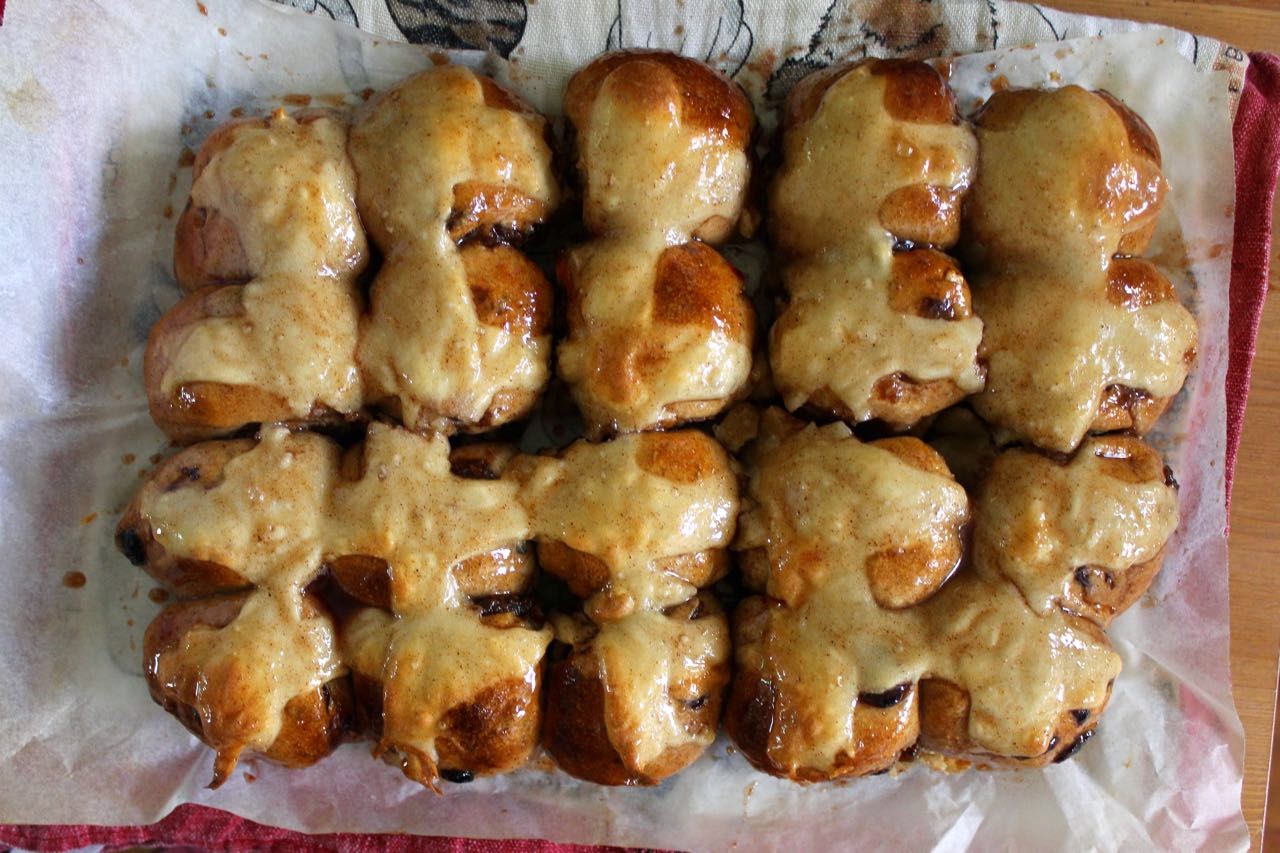 On my first go at baking hot cross buns this year, I made it vegan and added some wholemeal flour.  Other than that I followed the recipe from last year.  However I found I had been quite flexible with the times when I wrote out the recipe.  It seemed reasonable to test this by using the minimum timing.  I was pleased, and a little relieved, that it worked.  One batch was not enough and I needed another go at piping crosses.  You can see that the above ones cover almost all of the buns. 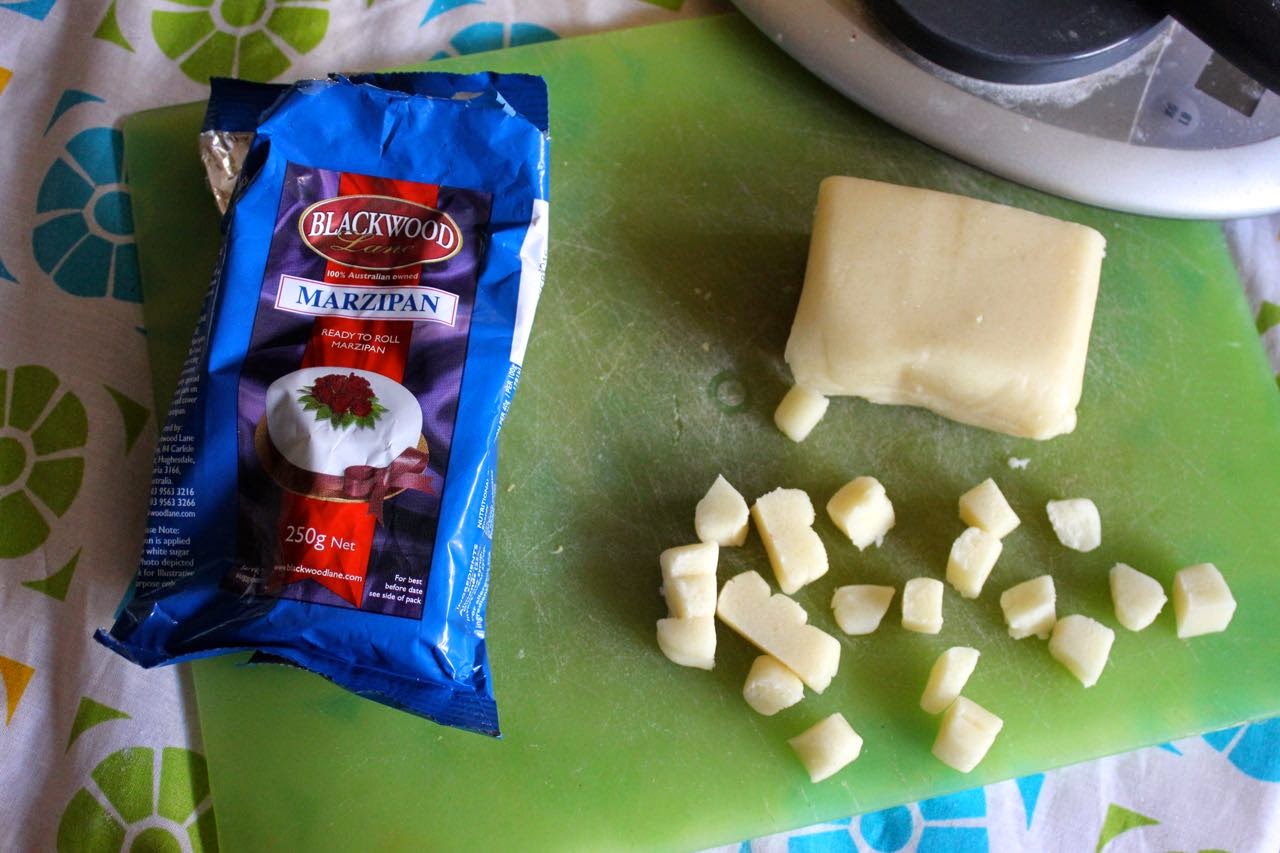 When I started on the next batch, I had a block of marzipan in anticipation of baking Marzipan Easter egg cupcakes.  The idea of adding the marzipan to the dough appealed greatly.  After all this is a recipe with minimal kneading so I thought the chunks might remain in the final buns.

I reduced the dried fruit (from 275g) and the sugar (from 50g).  Unlike the first batch, I let this one sit for a couple of hours though the minimum was an hour.  I allowed myself to just forget the dough when I was busy.  (And I was baking soup. cupcakes and easter egg chicks during the day!)

It was quite a moist dough that needed a sprinkling of flour every time I kneaded it.  Now that I have been making Celia's overnight sourdough bread regularly and kneading it briefly in the bowl, I was lazy and kneaded the hot cross bun dough in the bowl rather than taking it out. 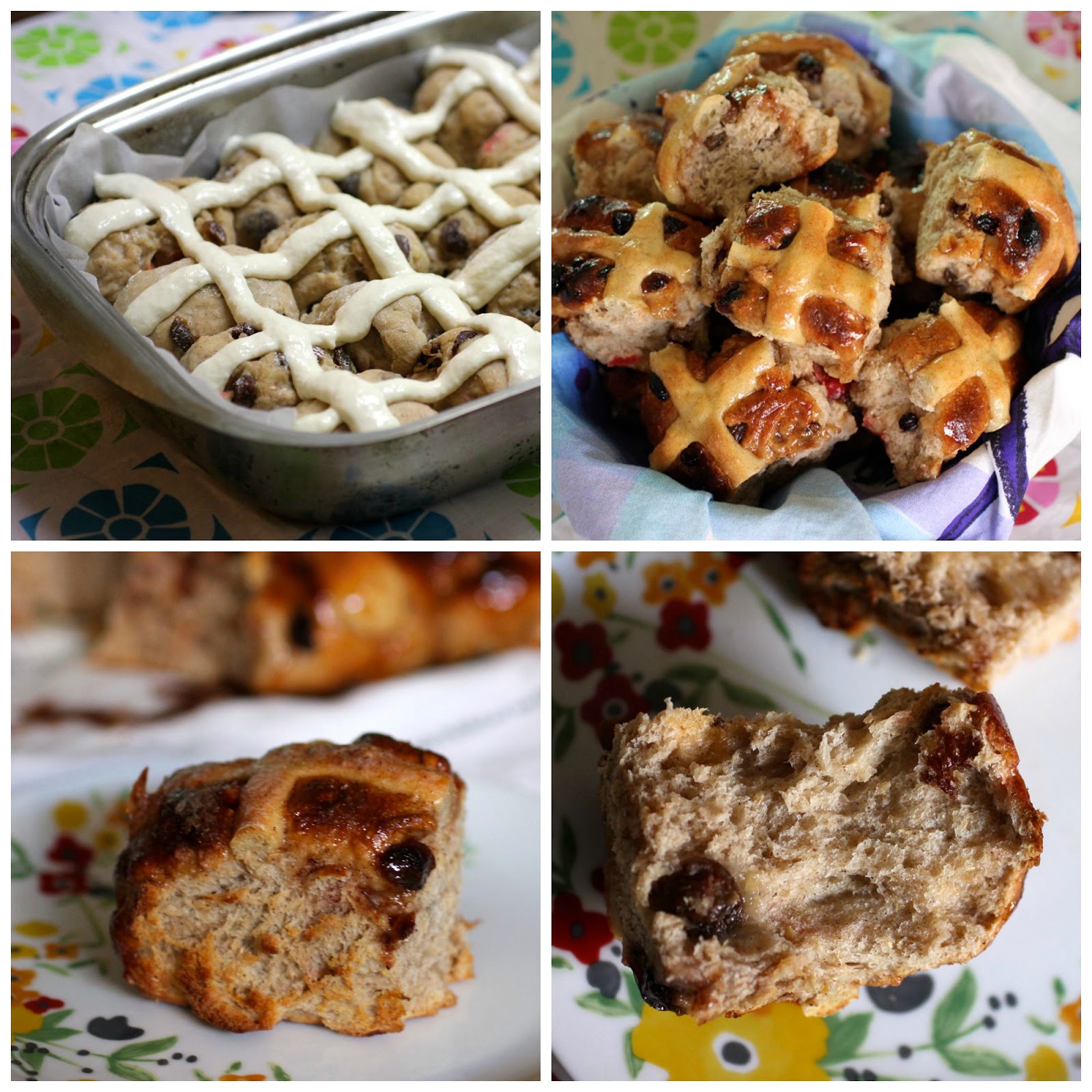 The second batch of hot cross buns were so much better than the first.  They were fluffy and soft and even seemed taller.  Disconcertingly the marzipan was not discernible in the buns.  There were no little nuggets of the stuff.  Nor was there that lovely intense almond aroma about them.  Yet I like to think that the marzipan is a lot of the reason they were so good. 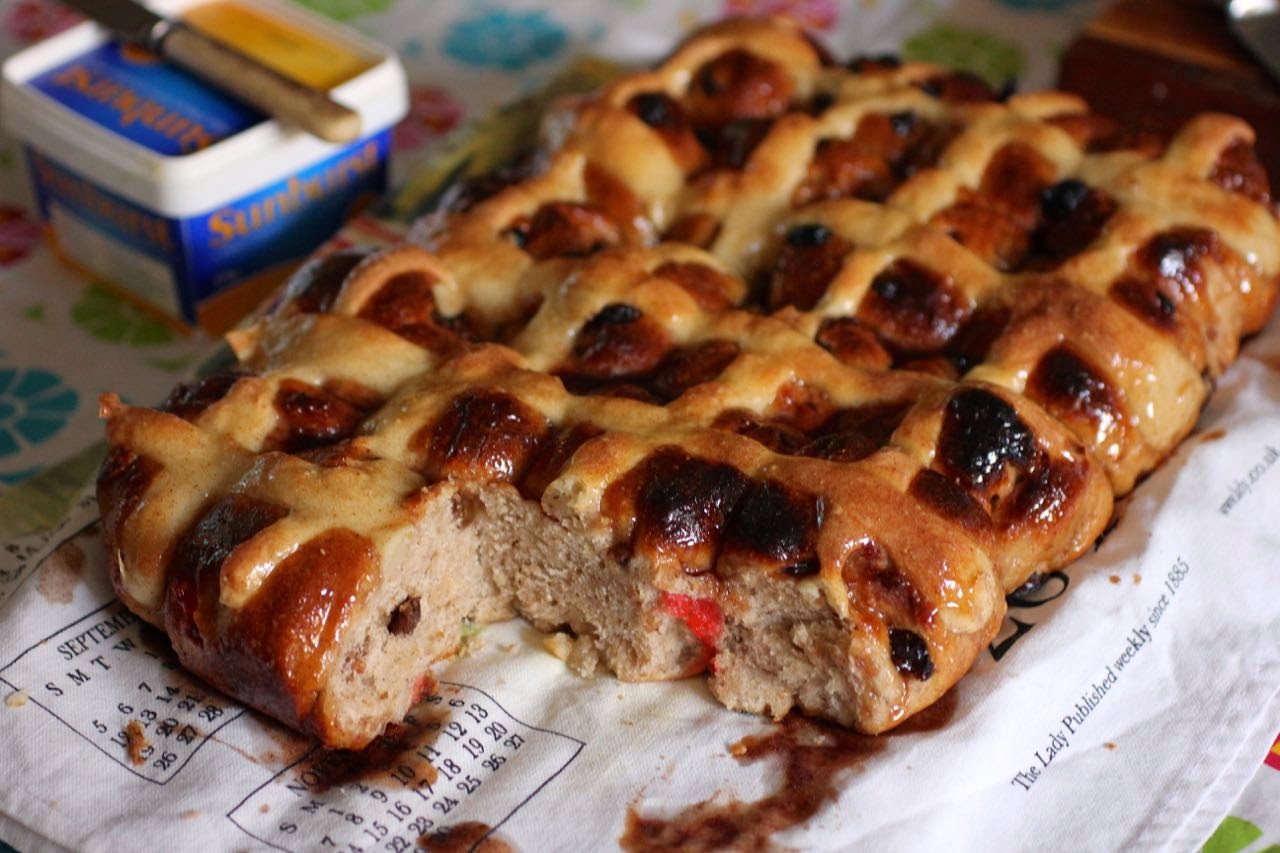 And I also made an effort to pipe thinner crosses.  As I have noted before, I love a bit of thick chewy cross, so I never make them pencil-thin.  It gives me great satisfaction to pipe lovely white ribbons of water and flour over the uncooked buns.  I was a little disappointed at first that they were golden rather than white when they came out of the oven.  Then I was easy on them and began to love the golden crosses. 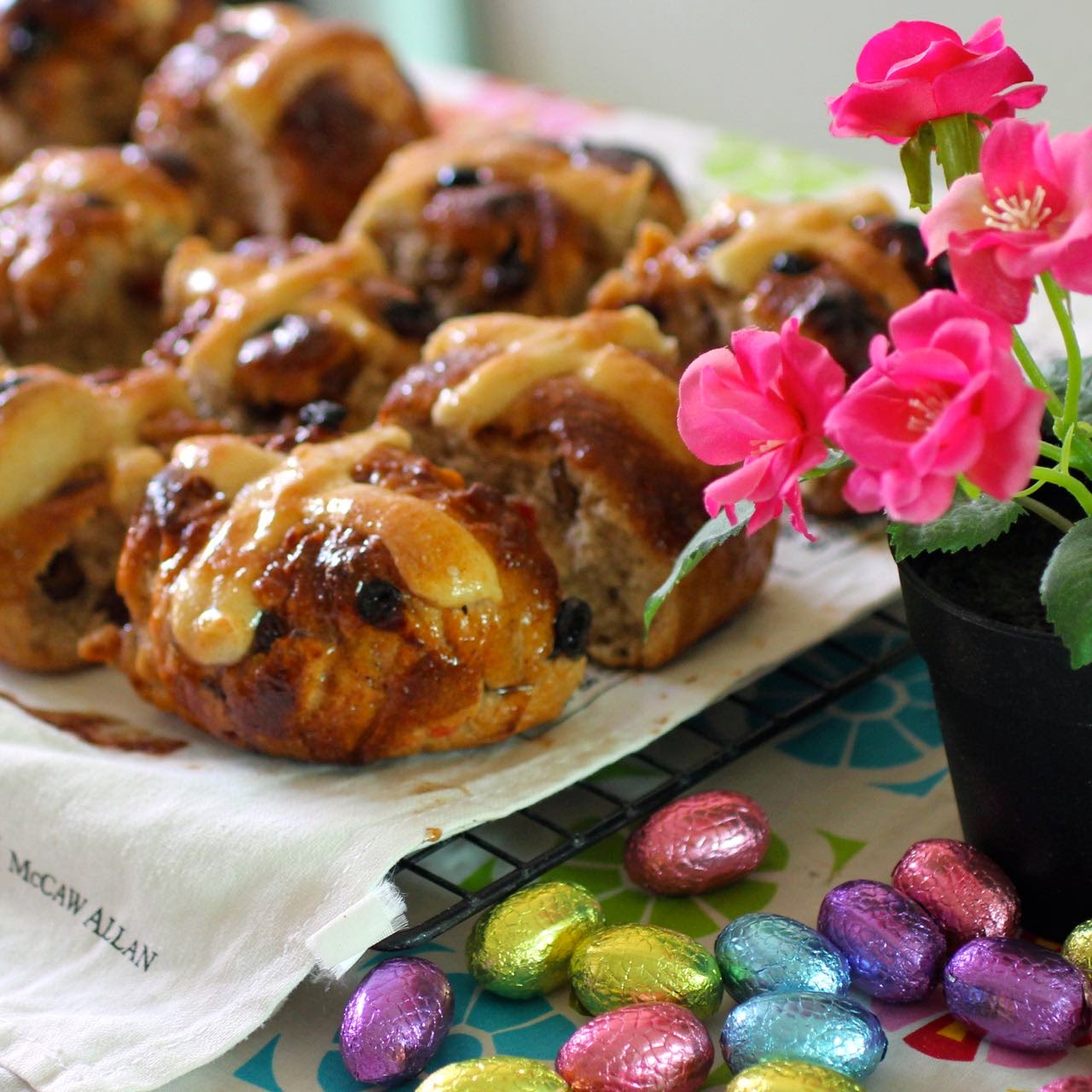 It just doesn't seem like Easter without Hot Cross Buns about.  While I am mighty fond of chocolate, I sometimes think I would prefer a good fresh bread if given the option.  At Easter, Hot Cross Buns easily trump Easter eggs with their cheap chocolate.  The main problem about the former is that I love them so much I have to try and exercise restraint for fear of looking just like a little round HCB (as we call them in my family).  My other problem was that it took all day to bake these sourdough buns.  If I had time to experiment more I would like to try a recipe where the dough sits overnight like my regular sourdough bread. 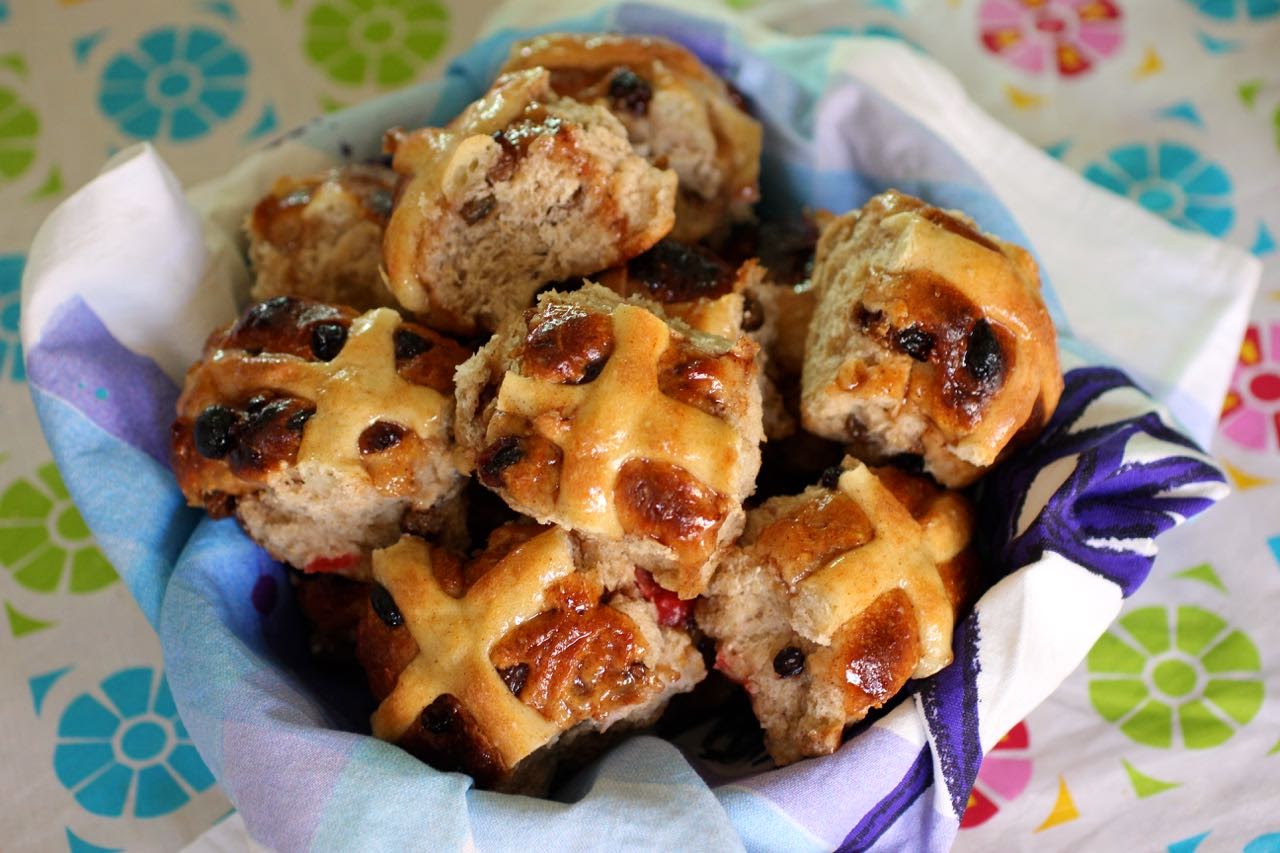 My last problem with Hot Cross Buns is that it is hard to justify making too many of these sticky dense buns.  After two batches, with many in the freezer, I am hanging up my HCB apron for this year, despite wishing to experiment a little more.  My mum has made an impressive eight batches of HCBs this year.  I will need to wait for next year to experiment further.  I am looking forward to it.

I am sending these Hot Cross Buns to  Susan's YeastSpotting, a long running event, and to Jen and Michelle's Bready Steady Go a new yeasty event that has risen out of the retired Fresh From the Oven event.

Put all ingredients into bowl except salt
Rest covered for 30 minutes.
Stir in salt.

Divide and roll dough into 20 balls.  Place in baking tray.
Cover and rest 1 hour (up to 3 hours)
Preheat oven to 220 C half an hour before baking.
Mix flour and water for crosses to make a paste.
Spoon paste into ziplock bag and snip tiny piece of corner.
Pipe paste over buns to make crosses (I like thick).

Bake 20 to 35 minutes until golden brown and hollow when tapped.
Five minutes before buns cooked, simmer glaze without stirring for 5 minutes.
Place buns on a teatowel on a wire rack, crosses up.
Brush ALL glaze on hot buns.  It will take a lot of brushing.
Cool at least 1 hour before eating.
Can reheat at 180 C for 10 to 15 minutes.

On the Stereo:
Countdown 40th Anniversary: Various Artists
Posted by Johanna GGG at 22:45