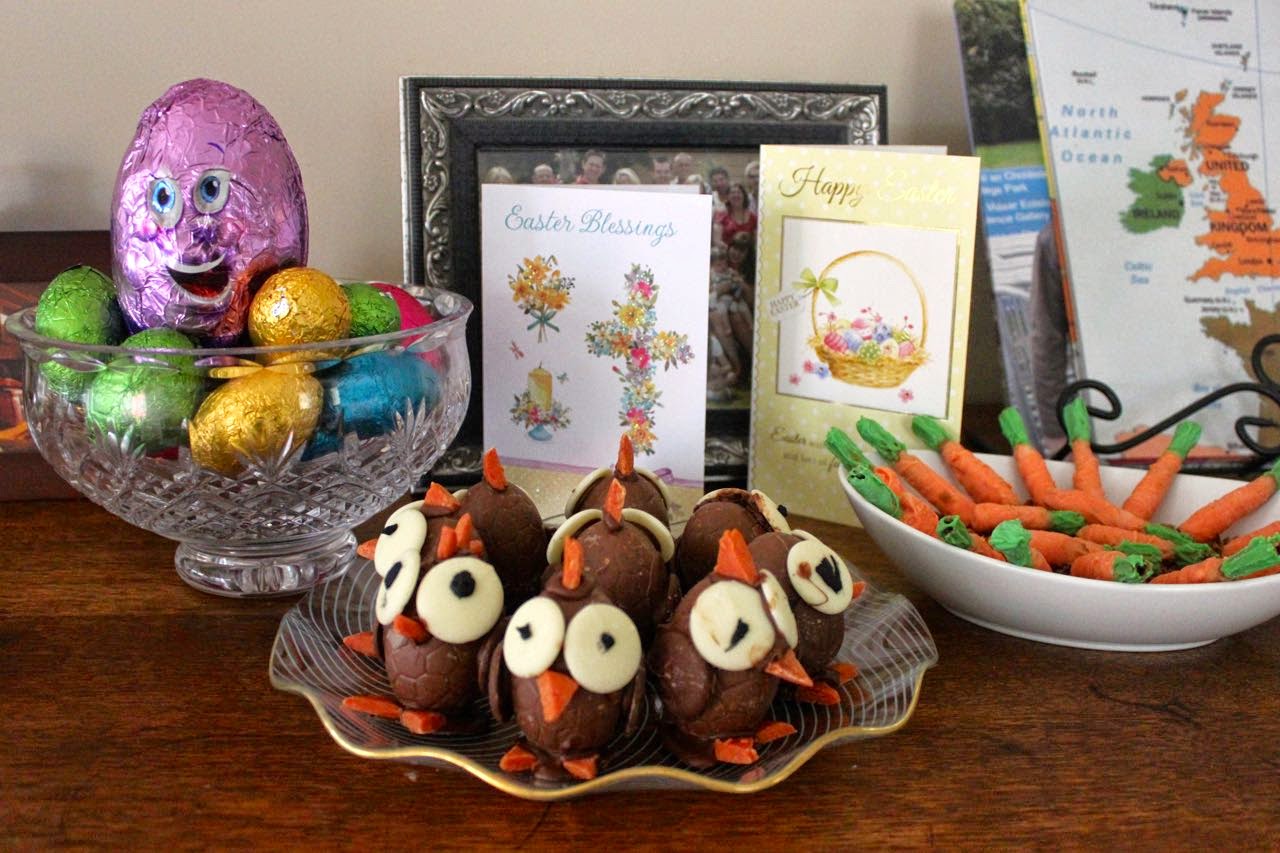 I was speaking to a friend who told me her mother makes the same old dishes and it is never very exciting.  My mum loves to experiment, I told her.  Why for Easter lunch we had beetroot, raspberry and feta salad.  She also had started on some chocolate carrots when I arrived on Easter Saturday.  I finished them off for her.  And I brought along some Easter egg chicks for my nieces and nephew.  It was a fun meal.  Not at all boring! 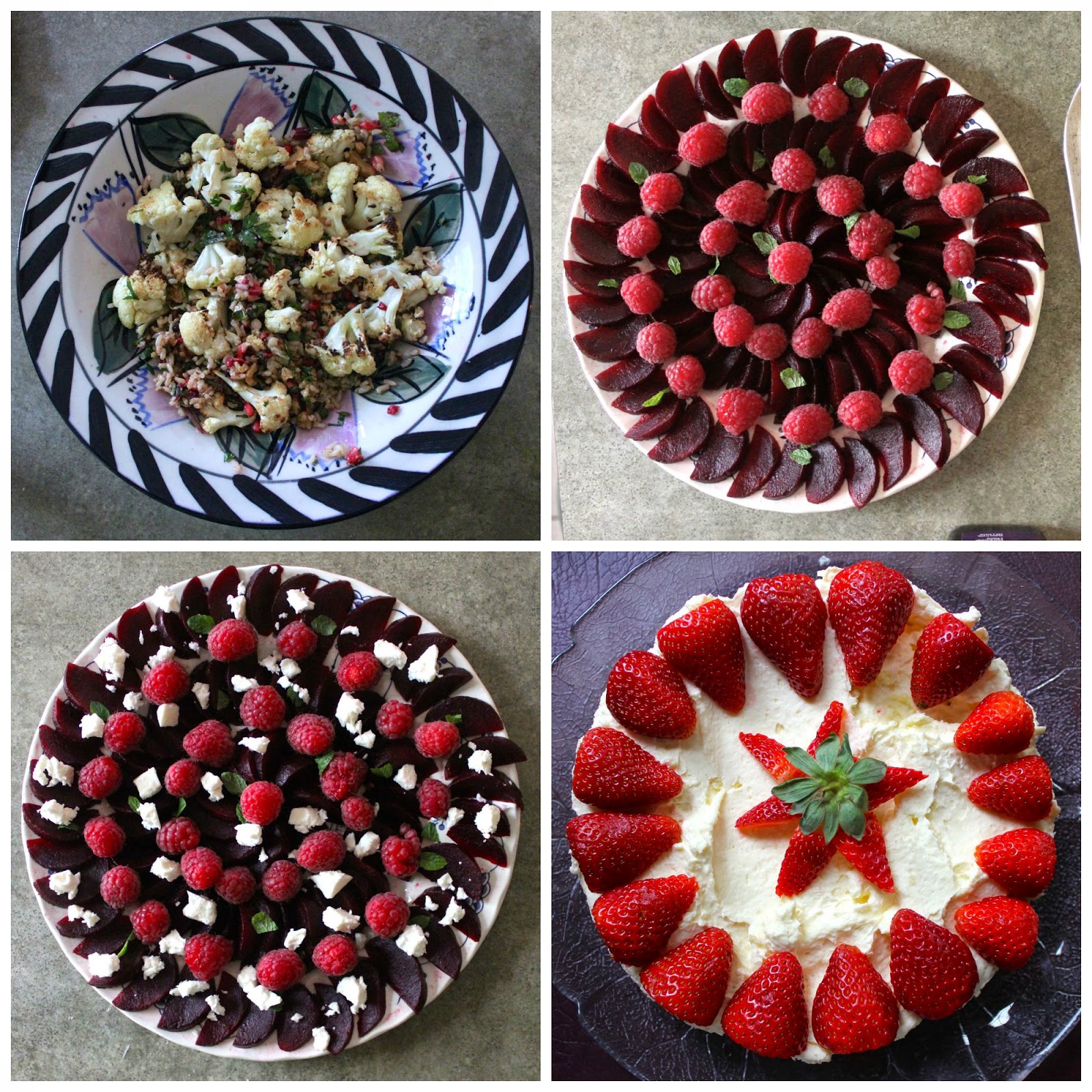 I have written about the carrot and feta nut roast I made for the family Easter lunch separately.  Instead I will share the beetroot, raspberry and feta salad.  I think my mum had eaten it in a restaurant.  It is one of those salads that should be tossed about to eat so all the flavours bounce off each other.  However I couldn't resist arranging slices of beetroot and making it a triumph of style over substance.  It looked a mess on the plate but tasted wonderful.  Sweet and salty and a little tart.

The nut roast and salad were served with a rather good cauliflower, pomegranate and rice salad, cauliflower cheese, roast potato and pumpkin and peas (and lots of meat for the carnivores).  I ate very well. 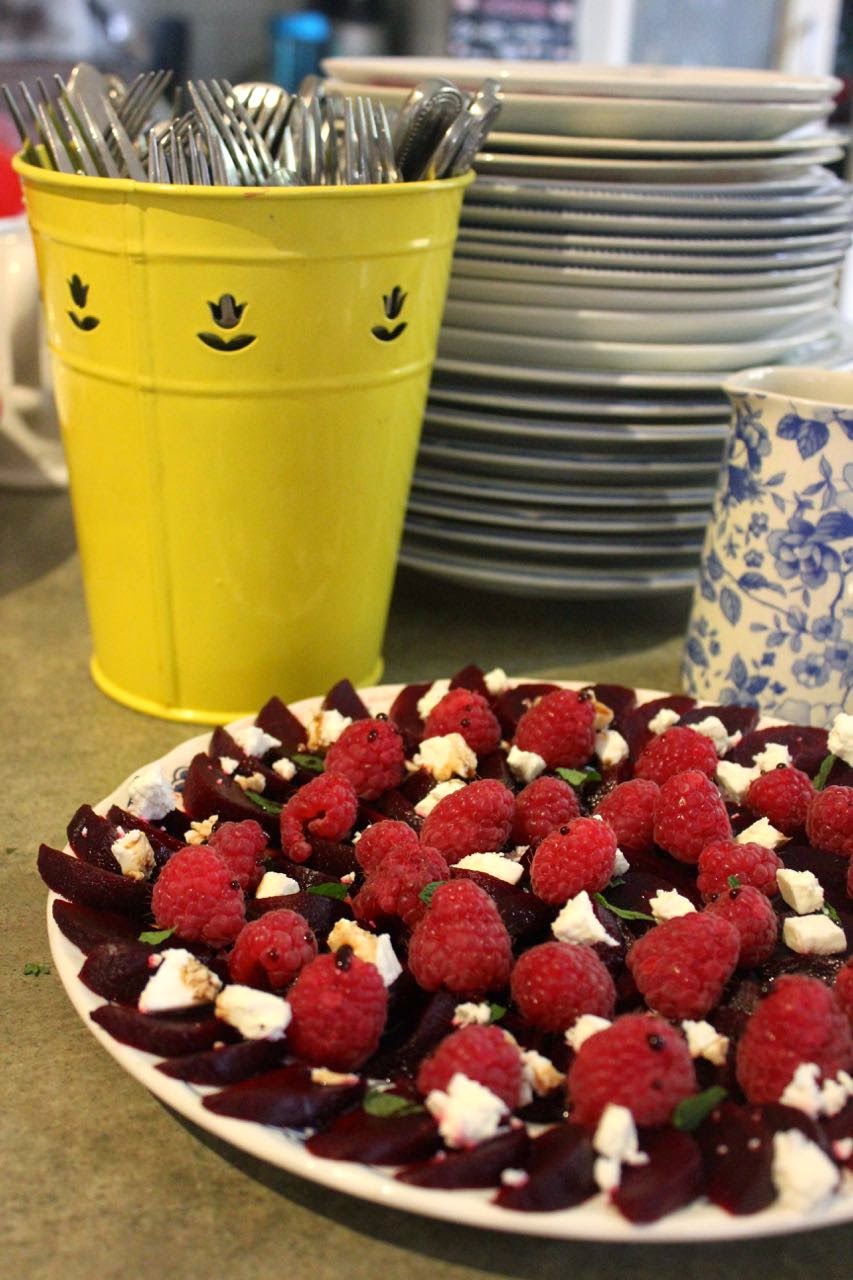 After the mains we had dessert.  My mum was quite restrained.  There were a lot of chocolate eggs and hot cross buns around after all.  So dessert was caramel tart, vanilla cheesecake with strawberries and chocolate carrots.  Lots of fuel for the kids who spent most of the day playing footy and cricket in the backyard. 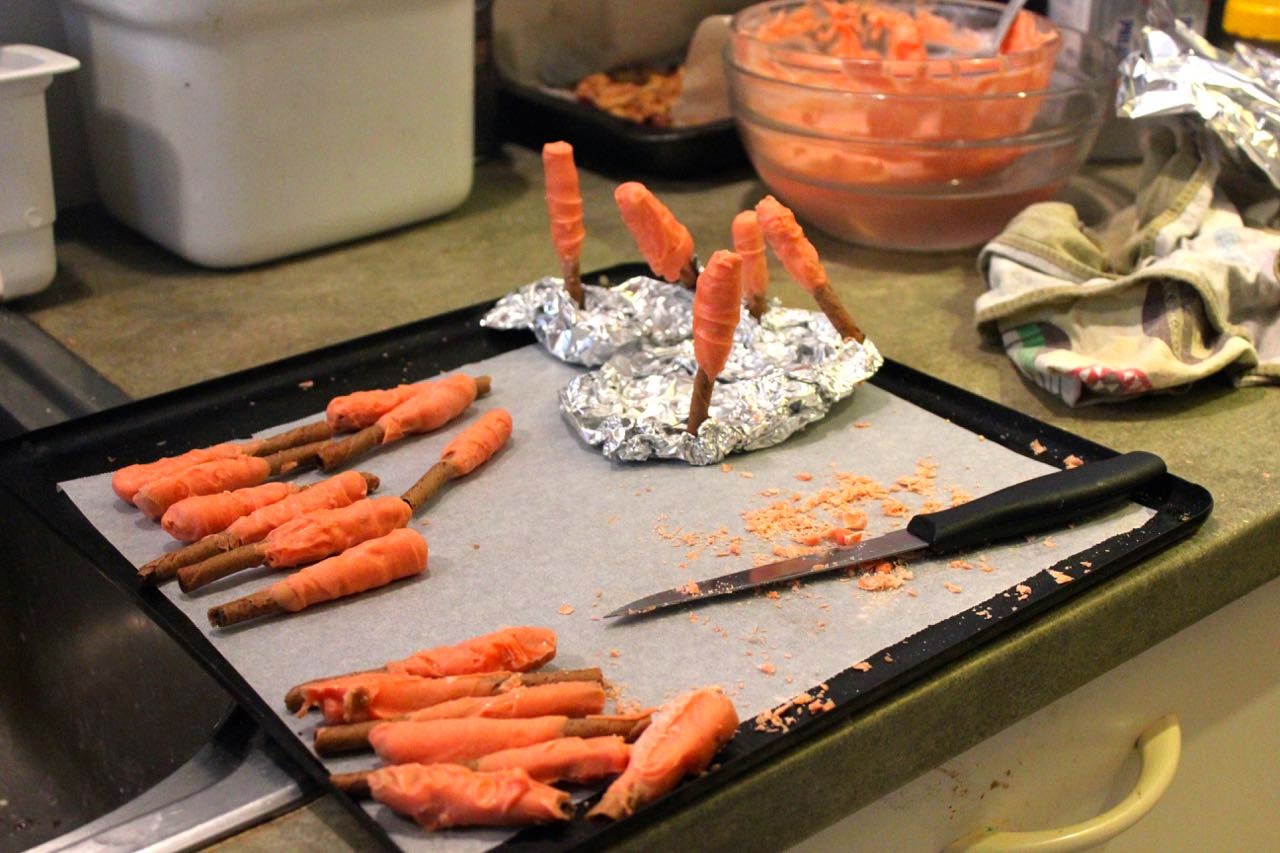 The chocolate carrots were seen by my mum on the telly.  She had started them when I arrived but I was happy to help out with them while she got on with other dishes.  Mum had only managed to find smaller chocolate wafer sticks than she intended.  (The knife in the photo is like a steak knife to help you get a sense of size.)  The wafers got dipped a few times, and I was making little foil stands for them, even though the recipe said to just dip them once, lie them on baking paper to set and scrap little carrot marks on them. 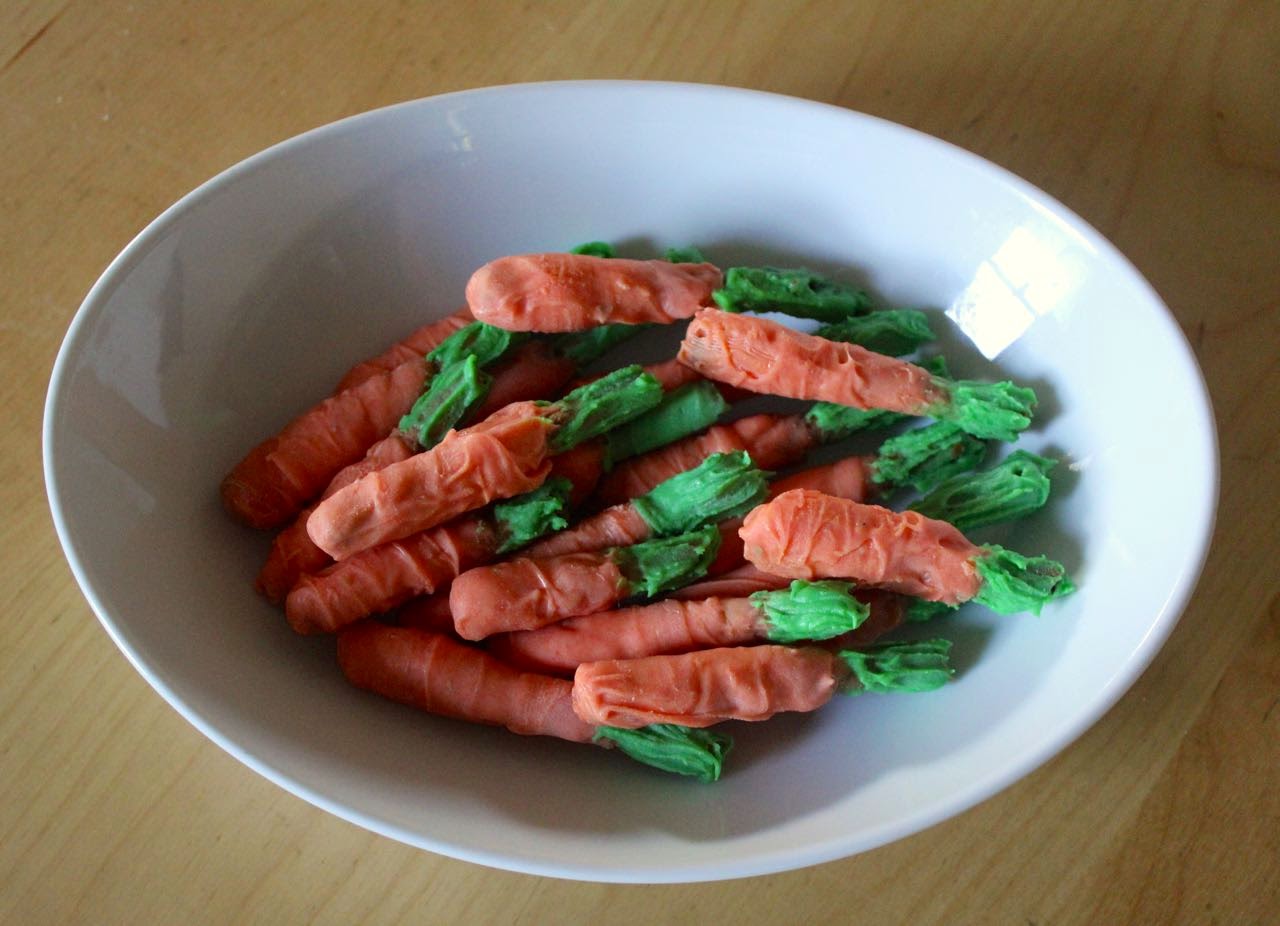 The recipe suggested bagging up the 'carrots' with some crushed up biscuits to make 'dirt' and giving them as presents.  We wanted them in a dish for people to eat.  They didn't look bad without the chocolate dirt but it sounded like fun.  We made it by placing the rest of the wafers in a ziplock bag and rolling with a rolling pin.  Actually Sylvia and her cousin Ashy did it.  I wanted them to have the fun of bashing the wafers but remembered the dents in our table from crushing candy canes. 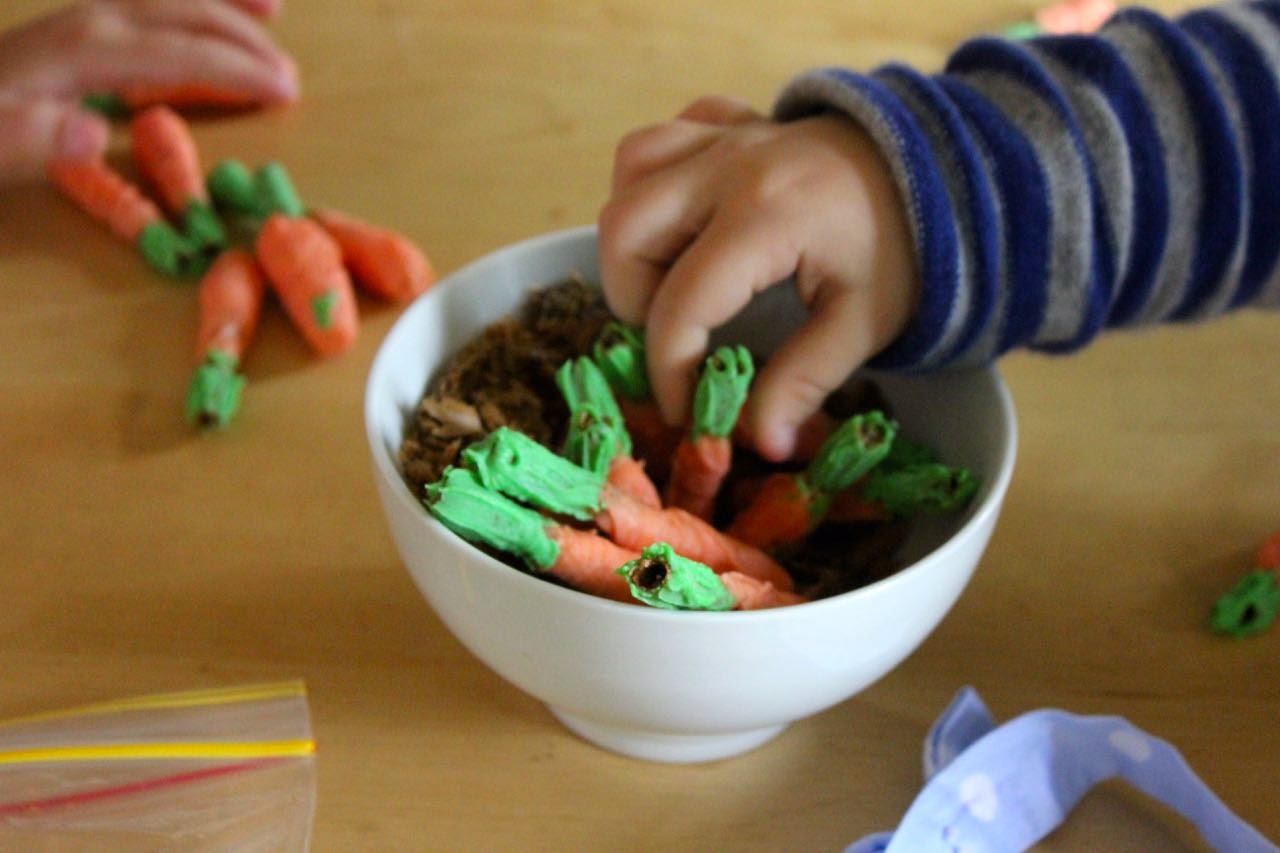 We tried to plant the carrots in the dirt in a small bowl but they would not stand up.  Then I just ended up putting them around the edge of a bowl of dirt with a few in the middle.  The kids loved them.  When they asked why carrots I told them because it was International Carrot Day on Easter Saturday.  Much talk ensued with the kids about what other international days might be celebrated.  I will spare you the scatological details but I can assure you they made me laugh.  And they loved telling me they were eating their vegies while they ate chocolate! 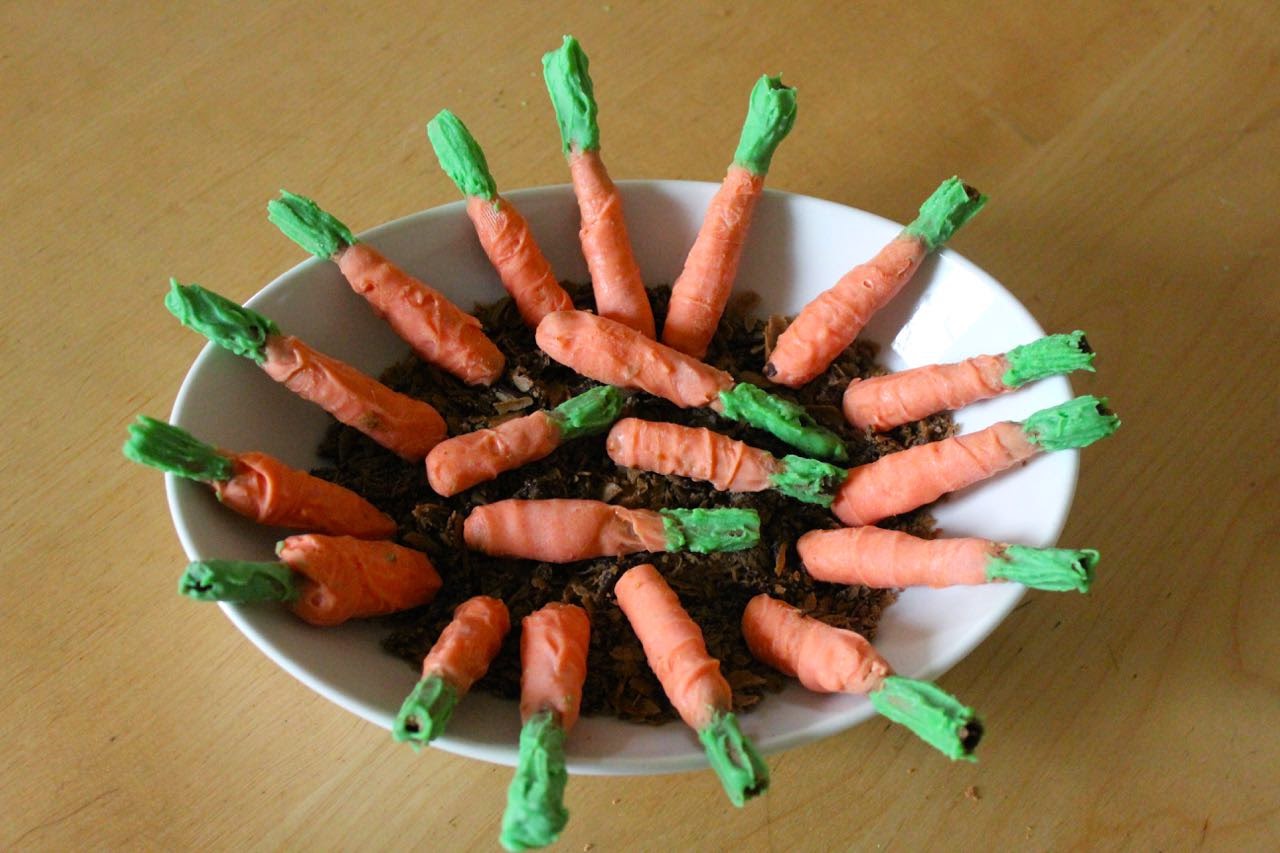 Even more fun was the Easter egg hunt.  You may remember last year that my dad orchestrated a colour coded egg hunt where each child had a different coloured egg.  This year he surpassed himself and had a different flavoured egg for each child and drew their names out of a hat. 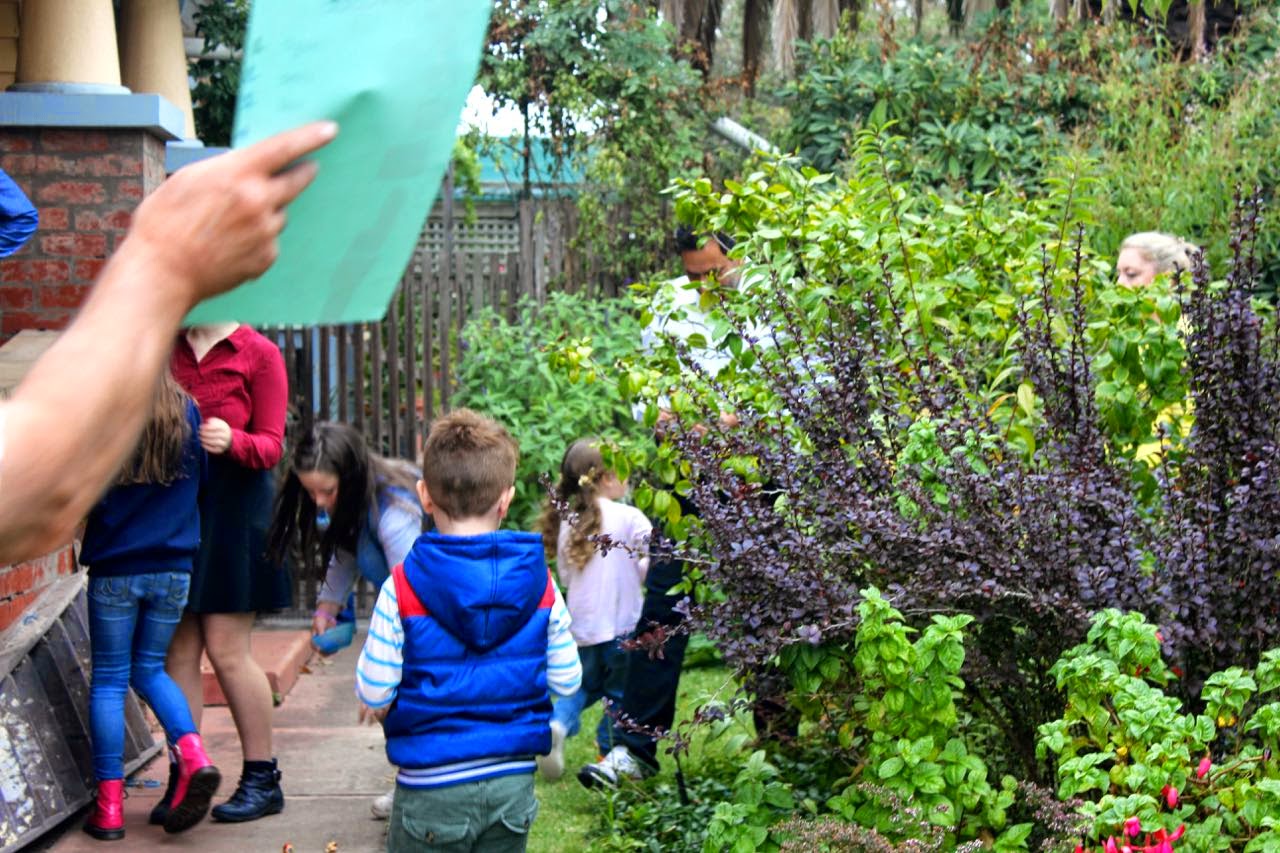 The children had great fun hunting the eggs between main course and dessert.  Not only did they help each other find eggs but they also had a great time swapping eggs at the end of the hunt so each kid had a variety of eggs.  The hiding was rather tricky and two eggs were still unaccounted for at the end of the hunt.  I must remember to check if they have been found yet.  Perhaps they will be discovered by an archeologist many years from now! 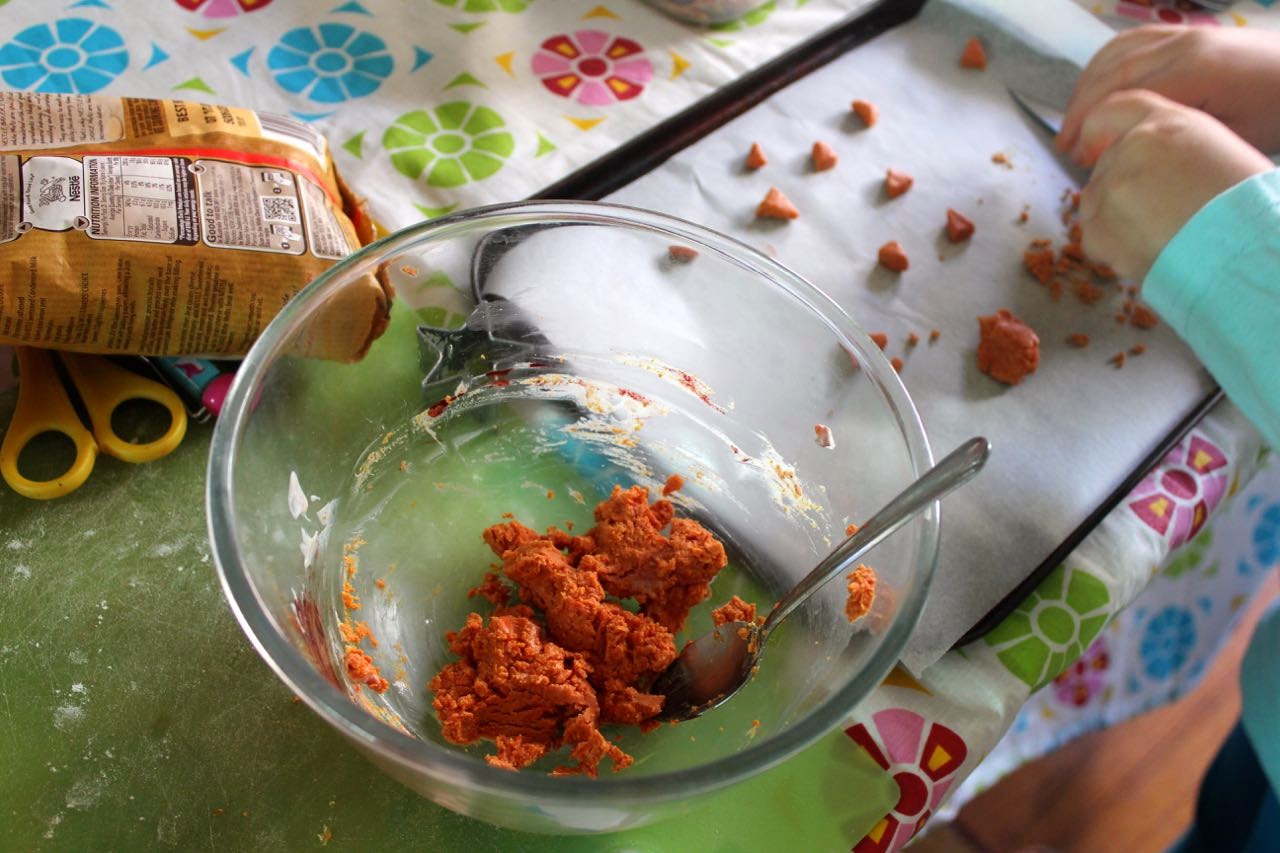 But let us return to the home made chocolate goodies.  Did I mention that my mum played me a video clip of the chocolate carrots being made on the telly.  It looked far easier than it was.  The same might be said for the Easter egg chicks that Sylvia and I made for her cousins.  Both used coloured chocolate buttons, which neither my mum nor I had.

My mum did ok with colouring the white chocolate but I think I was a bit heavy handed with the food dye and the chocolate seized.  It was no longer for dipping or pouring but worked well if you wanted to play with it like playdough.  Which is what I did.  I made flat tongues of orange chocolate that I could chop into beaks and feet.  I had planned to pour the coloured chocolate onto baking paper and chopping it when just set so in a way this was easier and quicker. 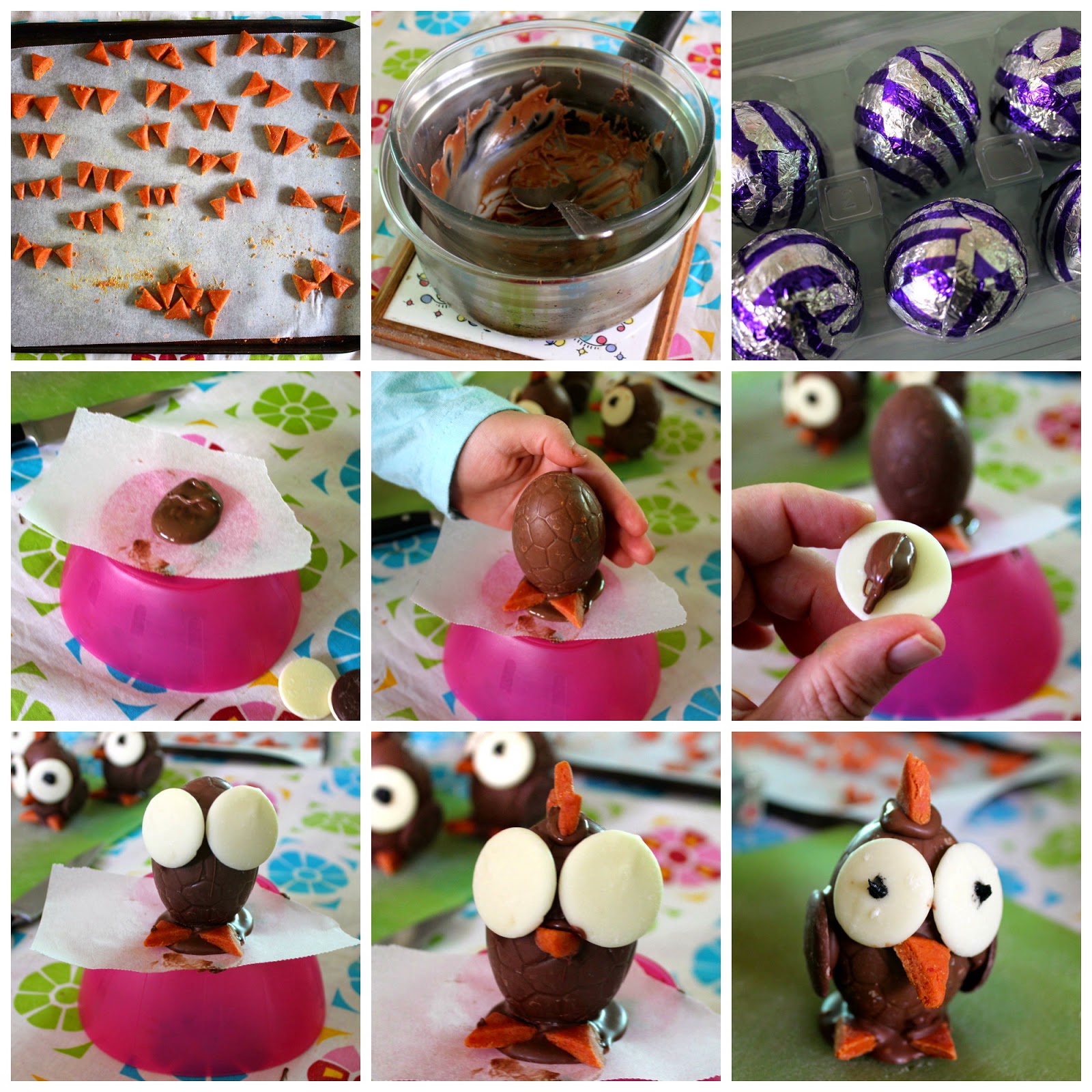 Making the chicks was much easier once we had worked on the white chocolate.  The recipe called for Creme Eggs.  There were none to be found in the supermarket when I looked so we bought Cadbury's Marvellous Creations eggs because I thought they were roughly the same size and might be sturdier than other eggs (having popping candy and smarties in the chocolate).

It was only towards the end that I realised I had misunderstood the instructions and hence put the eggs on an upturned bowl.  Having the baking paper meant I didn't really need the bowl. 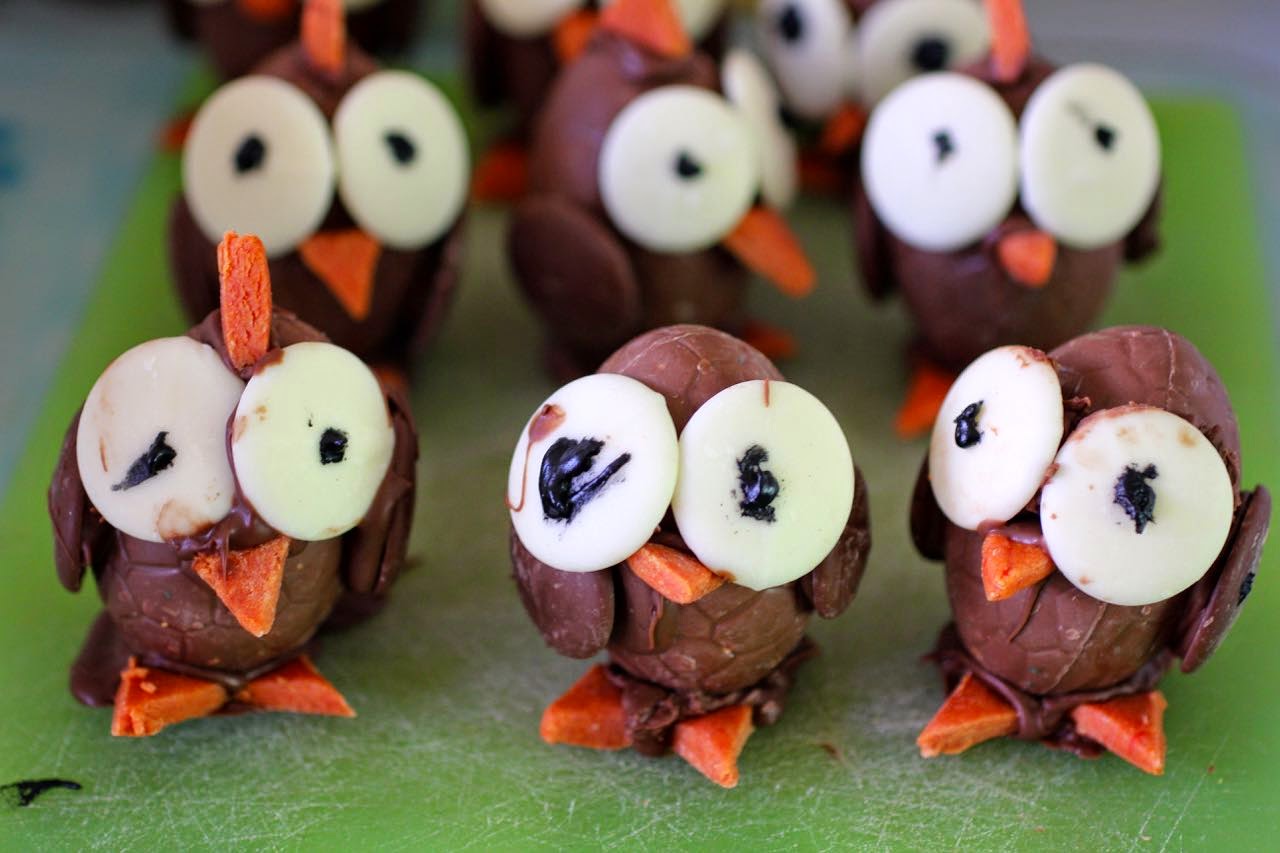 Sylvia helped me make the chicks so I gave up having them perfect.  However I can't blame her for all the imperfections because I didn't do a great job either.  Using melted milk chocolate and white chocolate buttons was a recipe for smudgy milk chocolate fingerprints on the eyes.  At one point I just removed some smudgy eggs before they set but I didn't manage it for others.

My other great failing was drawing on eyes with an icing pen.  I could blame the pen but I suspect my technique could do with some improvement.  I found it hard to draw a black dot on the eyes without the pen dragging black icing everywhere.  Honestly it would be easier to stick down a tiny lolly like a Junior Mint or some chopped liquorice. 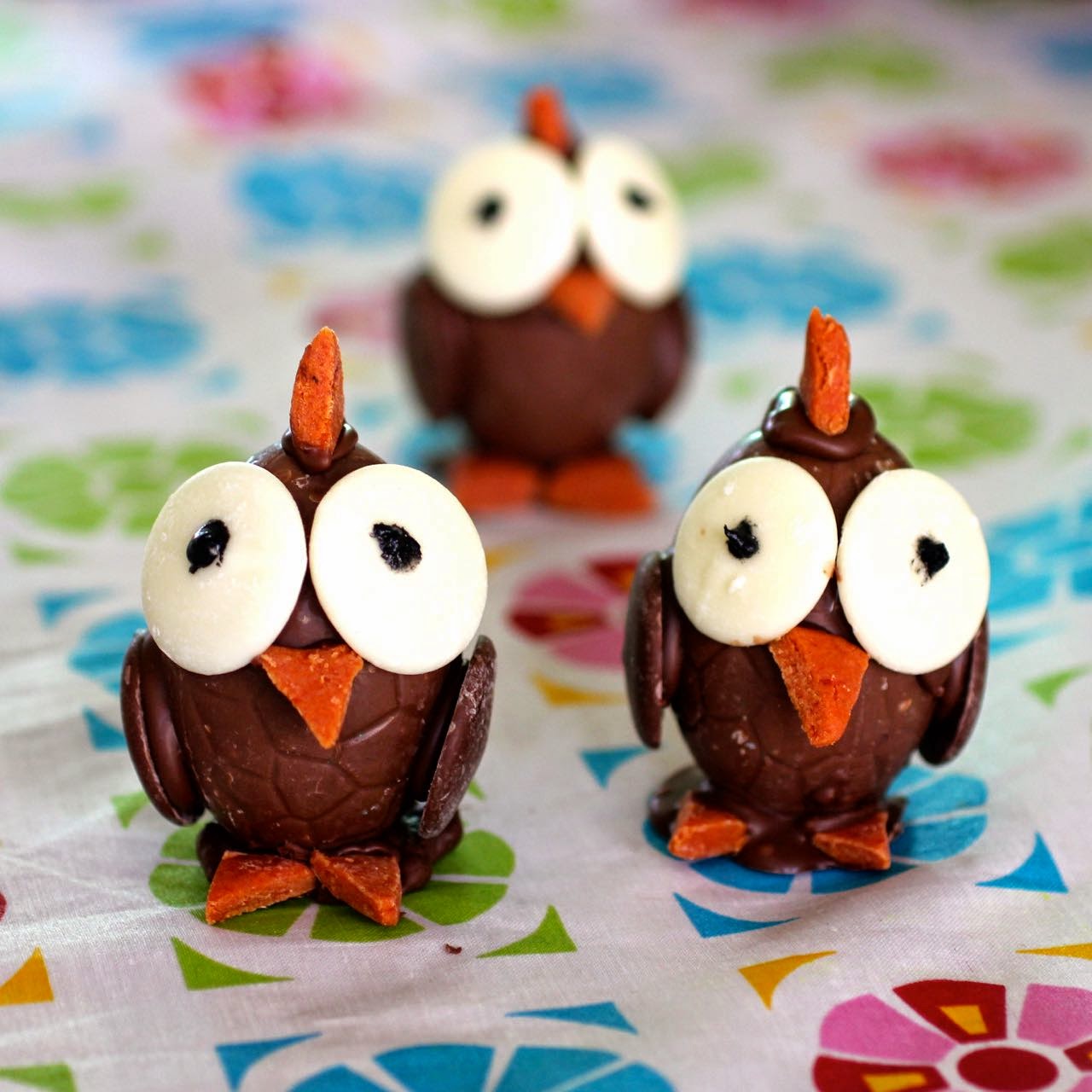 I had meant to wrap each egg in cellophane to give out but they looked so cute.  So I just put them out on a plate.  Then I put them in ziplock bags when the kids were going home.  They received a lot of excited exclamations and Sylvia was very proud of her handywork.

I am sending the Easter egg chicks to Choclette at Tin and Thyme for We Should Cocoa.  The theme is No Bake.  I am sending the chocolate carrots to Kat at Baking Explorer (and Stuart at CakeyBoi) for Treat Petite.  This month the theme is Hello Spring.  And finally I am sending the salad to Deb at Kahakai Kitchen for Souper Sundays and Karen at Lavender and Lovage for Cooking with Herbs.

Beetroot, raspberry and feta salad
From my mum

Thinly slice wedges of beetroot and arrange on serving plate.  Arrange raspberries and crumble feta over beetroot.  Scatter with mint leaves.  Drizzle with vinegar and serve.

Melt some white chocolate and colour orange with some drops of food colouring.  Place above a small saucepan of hot water to keep the chocolate warm and melted.  Spoon melted chocolate over three quarters of wafers.  Place on baking paper to set.

NOTES: If desired dip again once set.  I found that the chocolate was rather thick and swirling the sticks against the side of the bowl ensured not too much chocolate on it and left rather carroty horizontal lines.  I also found it better to cool the chocolate with the uncoated part of the wafers stuck upside in a little pocket made in a piece of foil.  They didn't take long to be set enough to be able to place on baking paper so that that they were still round.

Melt some white chocolate and colour green with drops of food colouring.  Place above hot water as with orange chocolate.  Dip remaining ends of wafers in green chocolate (or spoon chocolate over it) and set in either foil pockets or on baking paper.

NOTES: the chocolate was quite thick and I found it good to use a spoon to drizzle chocolate over ends and then scrape it off so there were vertical lines like carrot tops.

Easter egg chicks
From A Mummy Too

If you don't have orange melts, mix some white chocolate with red and yellow food colouring to make orange chocolate.  Cut triangles out of the white chocolate.  (Mine seized which made it easy to mould but if yours behaves then you may need to spread it on baking paper and let it mostly set before chopping.)

Melt a handful of the milk chocolate melts.  Place the bowl over hot water to keep it melted.
Place a piece of baking paper on a tray. Dab a blob of chocolate on the paper.  Place an egg in the blob.  Arrange two orange melts or triangles in the melted chocolate at the base and hold the egg until the chocolate firms up.

Draw black dots on the eyes with an icing pen.

Leave chicks so the chocolate sets firmly before sharing with your friends and family.

On the Stereo:
Chants, Hymns and Dances: Gurdjieff and Tsabropoulos
Posted by Johanna GGG at 22:05