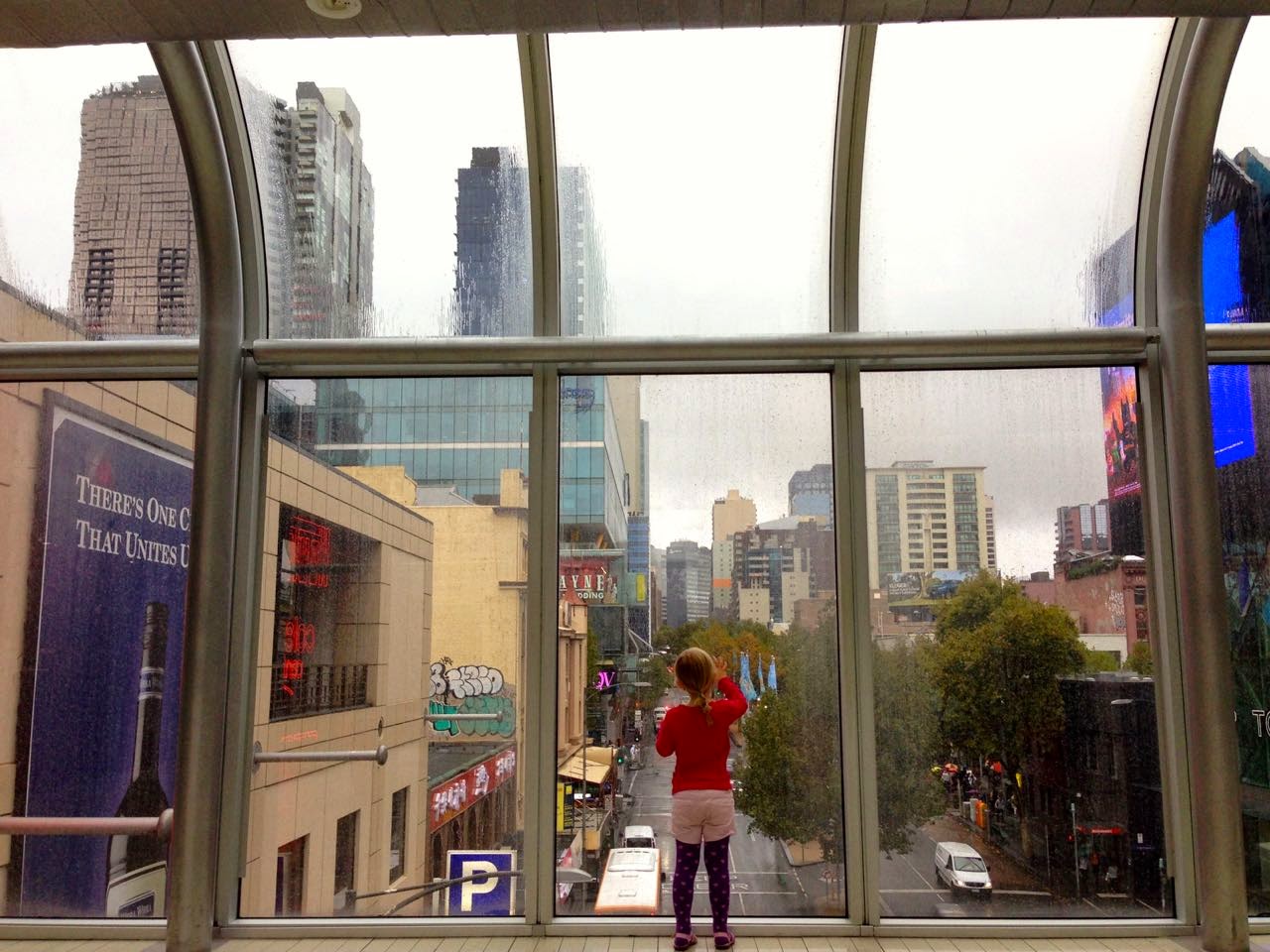 Yesterday we had a school holidays trip to the city.  It was a cold rainy Melbourne day that was perfect for spending in shopping centres.  I ate raw Snickers slice at Raw Trader, had a Snag Stand hotdog, bought new shoes, shopped in Uniqlo and shared some frozen yoghurt with E and Sylvia.  We were also accompanied to Sylvia's doll called Rosie.

E and Sylvia were off to see the Sponge Bob Square Pants movie but I couldn't bear to waste my precious movie hours on the little twerp (Spongebob not Sylvia).  As there was nothing else on at the movies to interest me I set off to enjoy myself in the city. 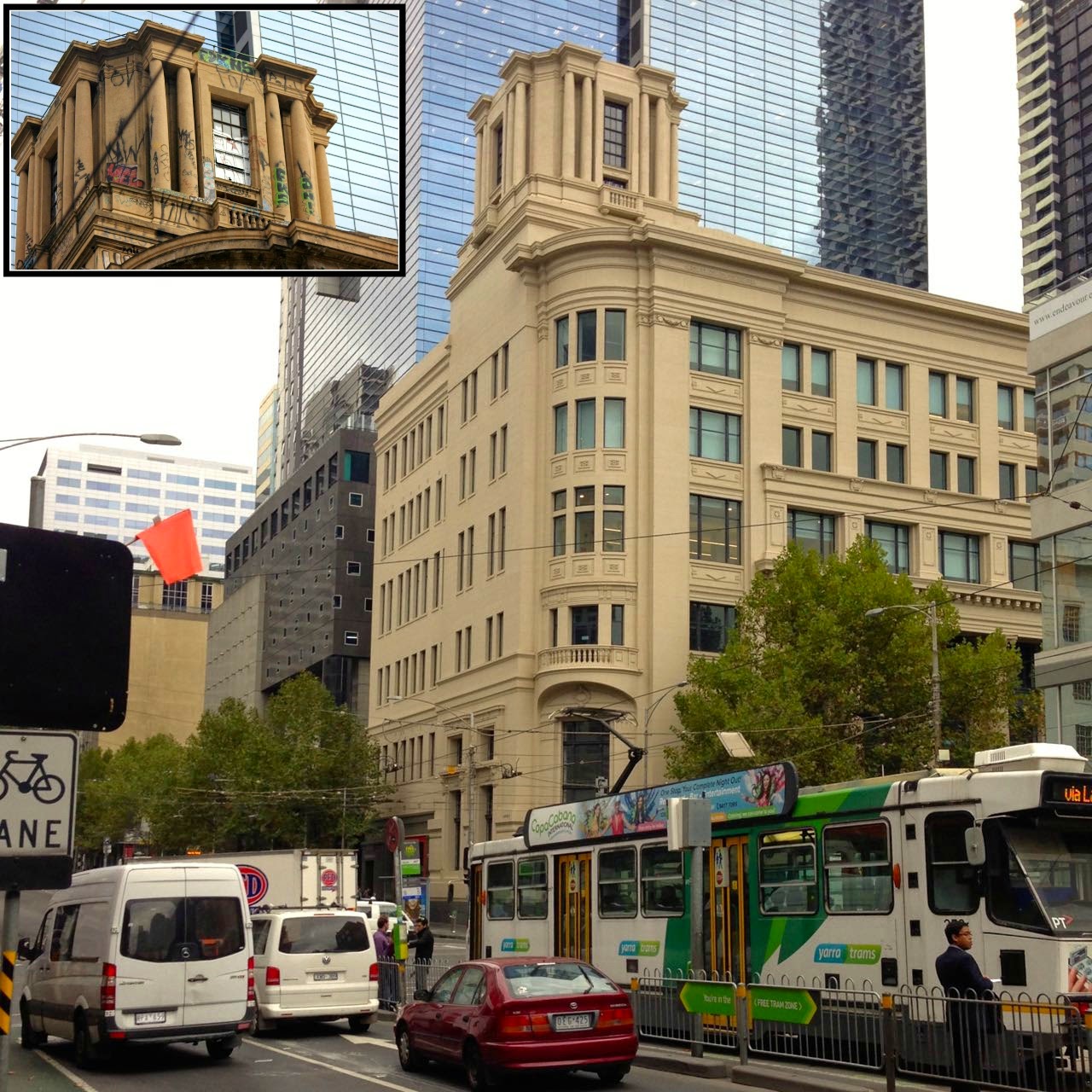 First sight of interest was this old Argus building.  I took a photo of it when it was derelict a couple of years ago (see insert) and so I was interested to see it is now looking like it has a lease of new life.  It has been renovated by a private education institution.  I am pleased to see it is being looked after because the now defunct Argus newspaper which was housed there, has an important place in the history of Australia. 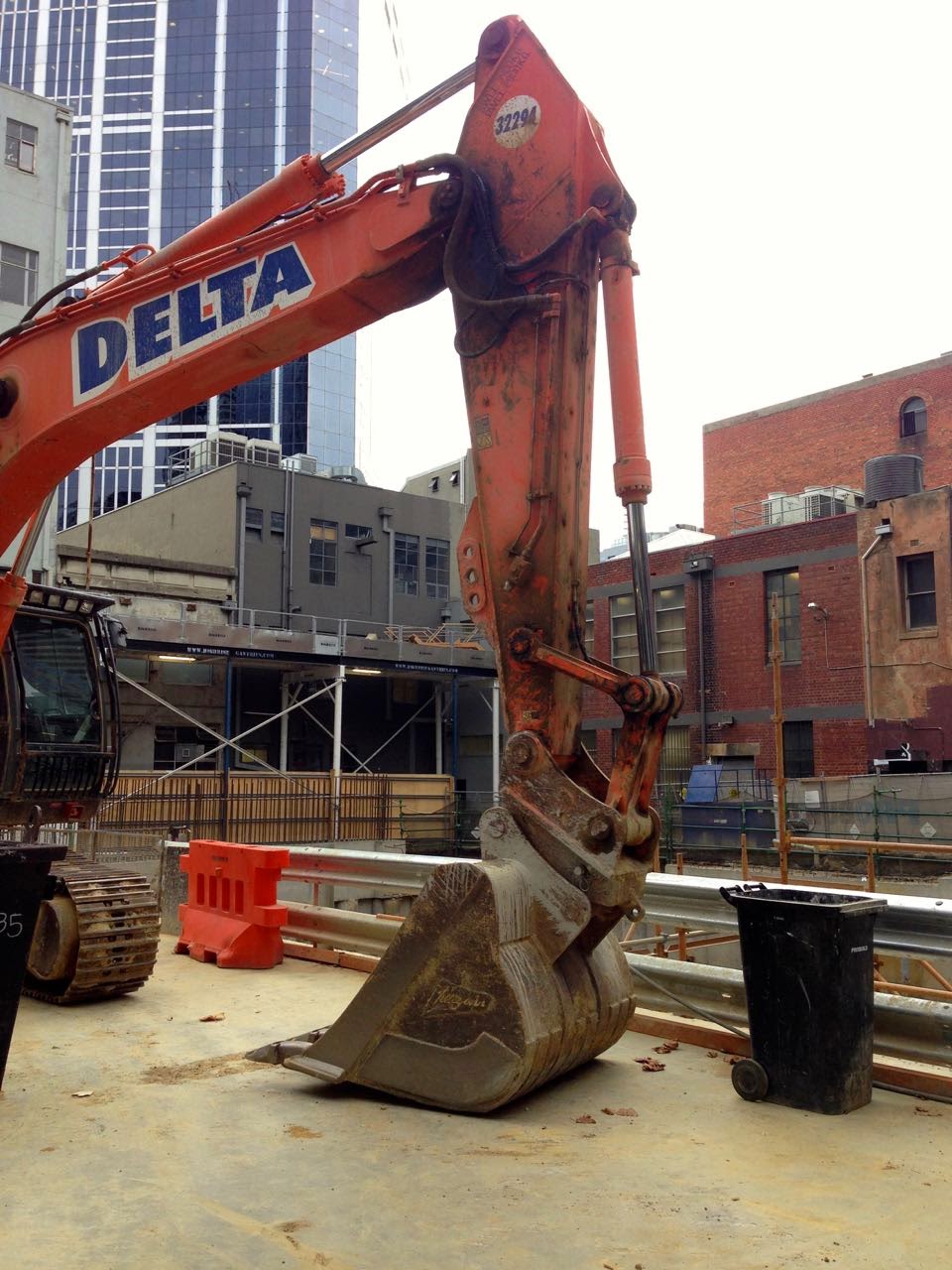 Then on the corner of La Trobe Street and Sutherland Street, I looked in fascination at a steam shovel that reminded me of a childhood story and Bill on Mr Squiggle.  Where one building is saved, another is demolished to make way to for new developments.

My first destination however was Raw Trader.  I have been curious about this raw cafe for some time.  It is not that I am a big raw food enthusiast but I love vegan desserts and am always interested to see raw food on other blogs. 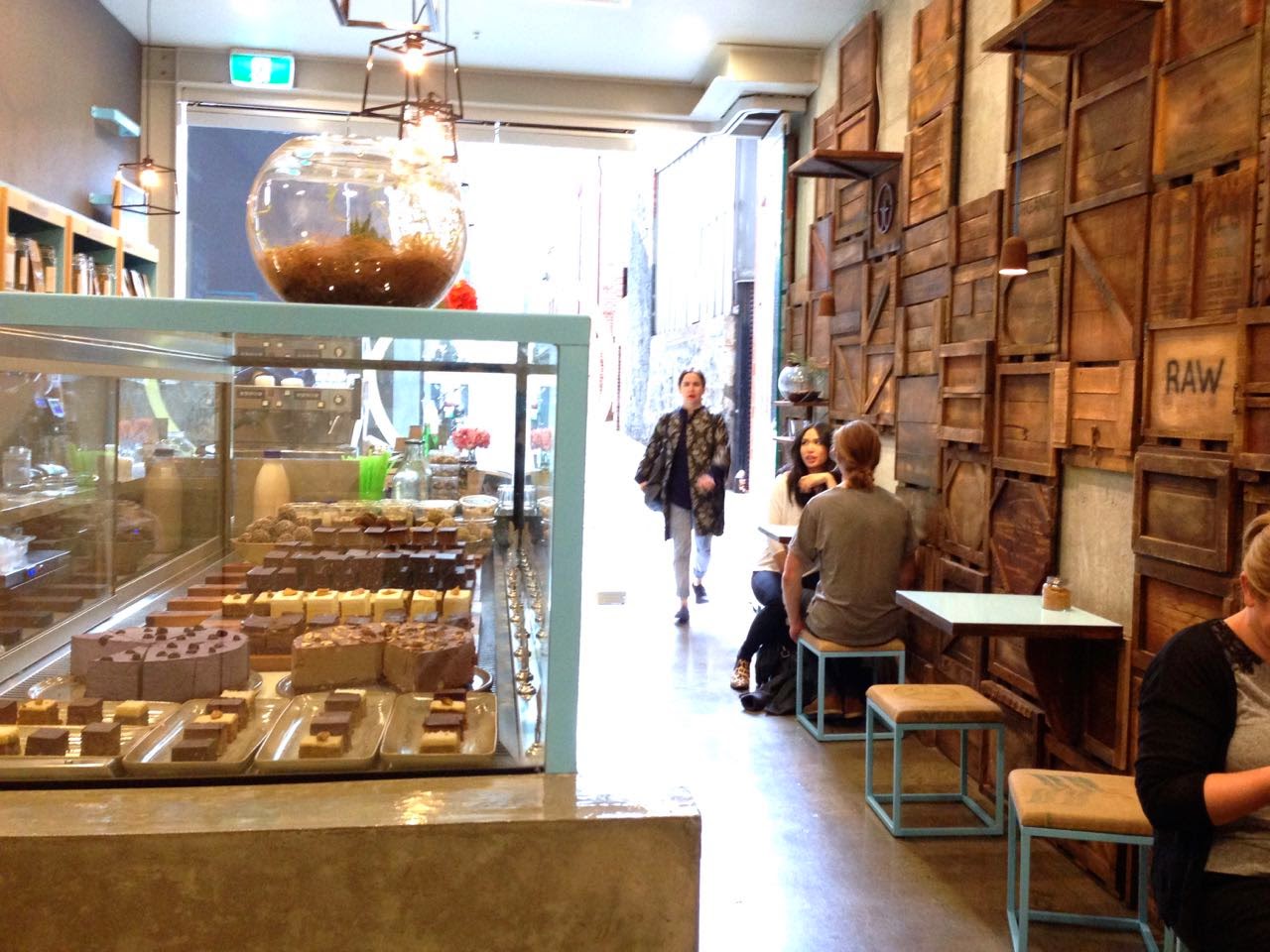 I really loved the ambiance of the place.  The old packing crates lining one wall gave it a sense of heritage chic and the cake display was just gorgeous.  The drinks menu had great smoothies but the teas weren't my kind of cuppa.  I was there for cakes and slices anyway.  Looking at all those beautiful slices, cheezecakes and bliss balls made me want to eat raw food forever. 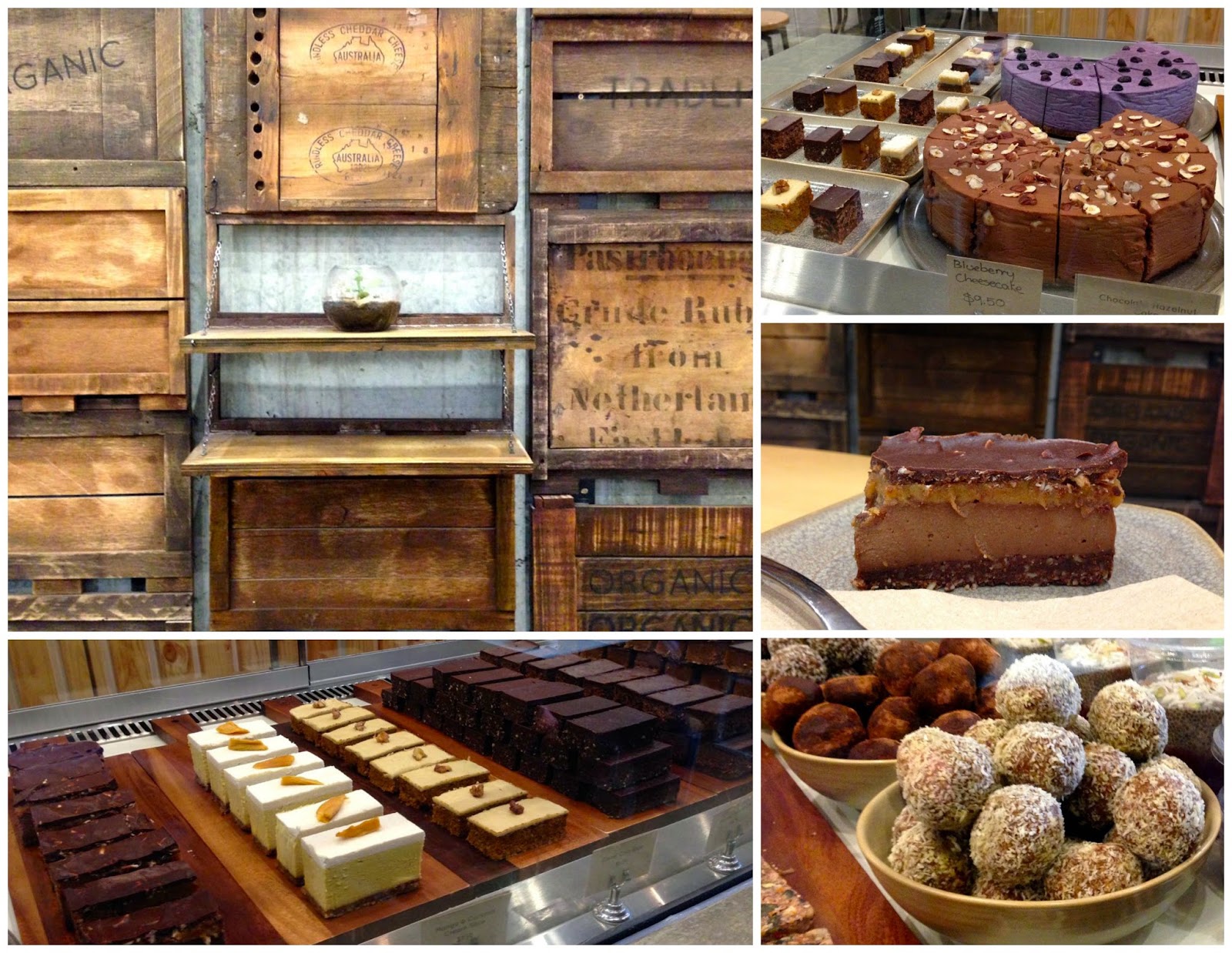 So I am sad to tell you that while the almond Snickers slice I tasted was interesting, it didn't blow my mind.  It just confirmed my wariness of raw desserts.  Though I have loved a few raw desserts that I have made at home, I have never warmed to coconut oil in large amounts.  I found the caramel layer tasted too much of dates and the fudge layer tasted too much of coconut oil. 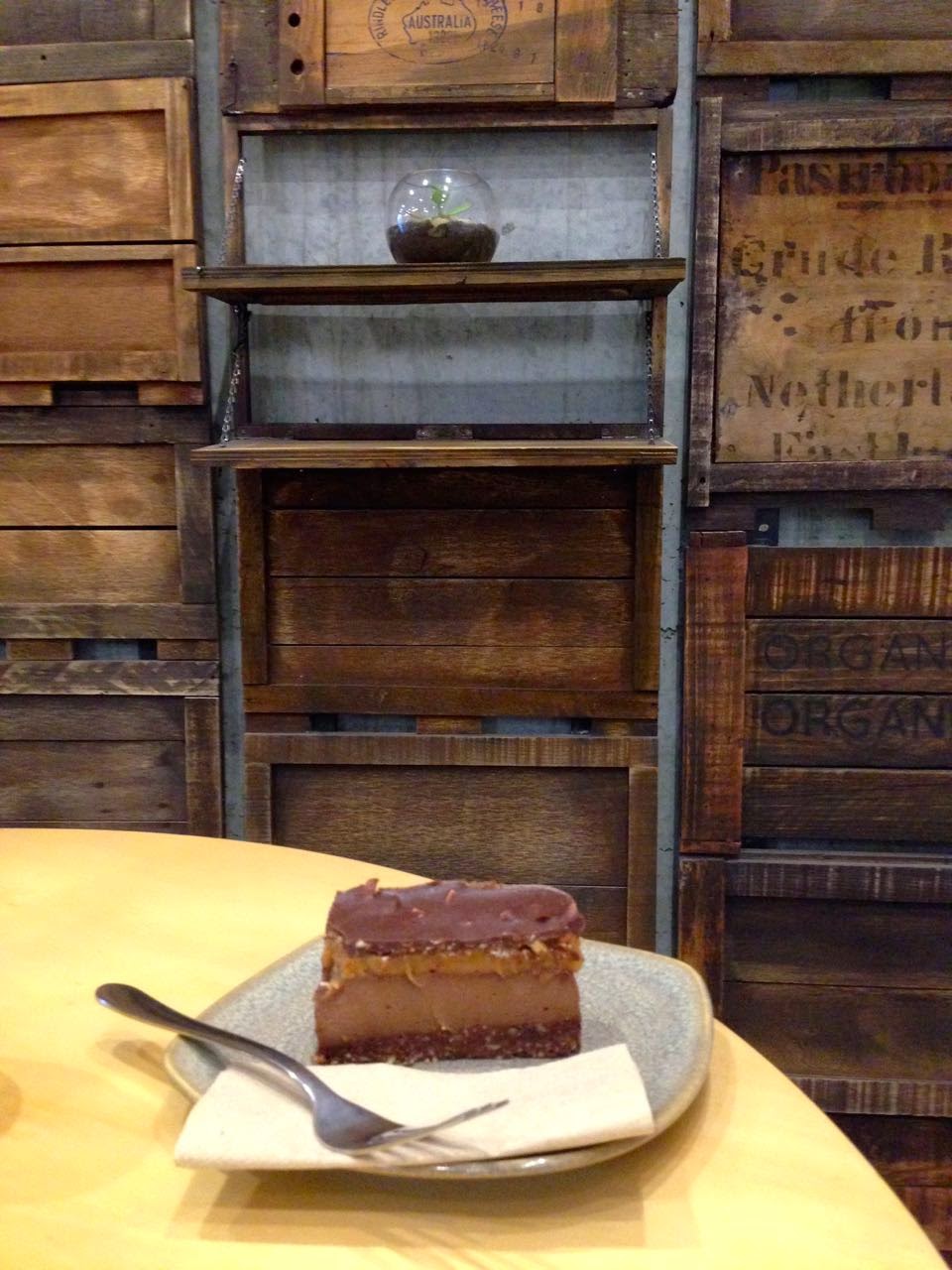 Yet I am still fascinated by raw food.  I found the slice interesting.  (In fact I would return to Raw Trader to try other non-bakes.)  I ate in an inquiring frame of mind as I read an article about Heston Blumenthal and all his weird and wonderful culinary experiments.  I ate slowly and curiously.  I mulled over what was in each layer.  I compared it to a Snickers bar.  I had to ask about what was in the fudge layer but was given a list of ingredients for the whole bar rather than the layers.  So I gave it back to the woman behind the counter who farewelled me with "thanks Angel".  I love a place that is not only warm and welcoming but can send you on your way feeling happy.  Even if I am not a raw food type! 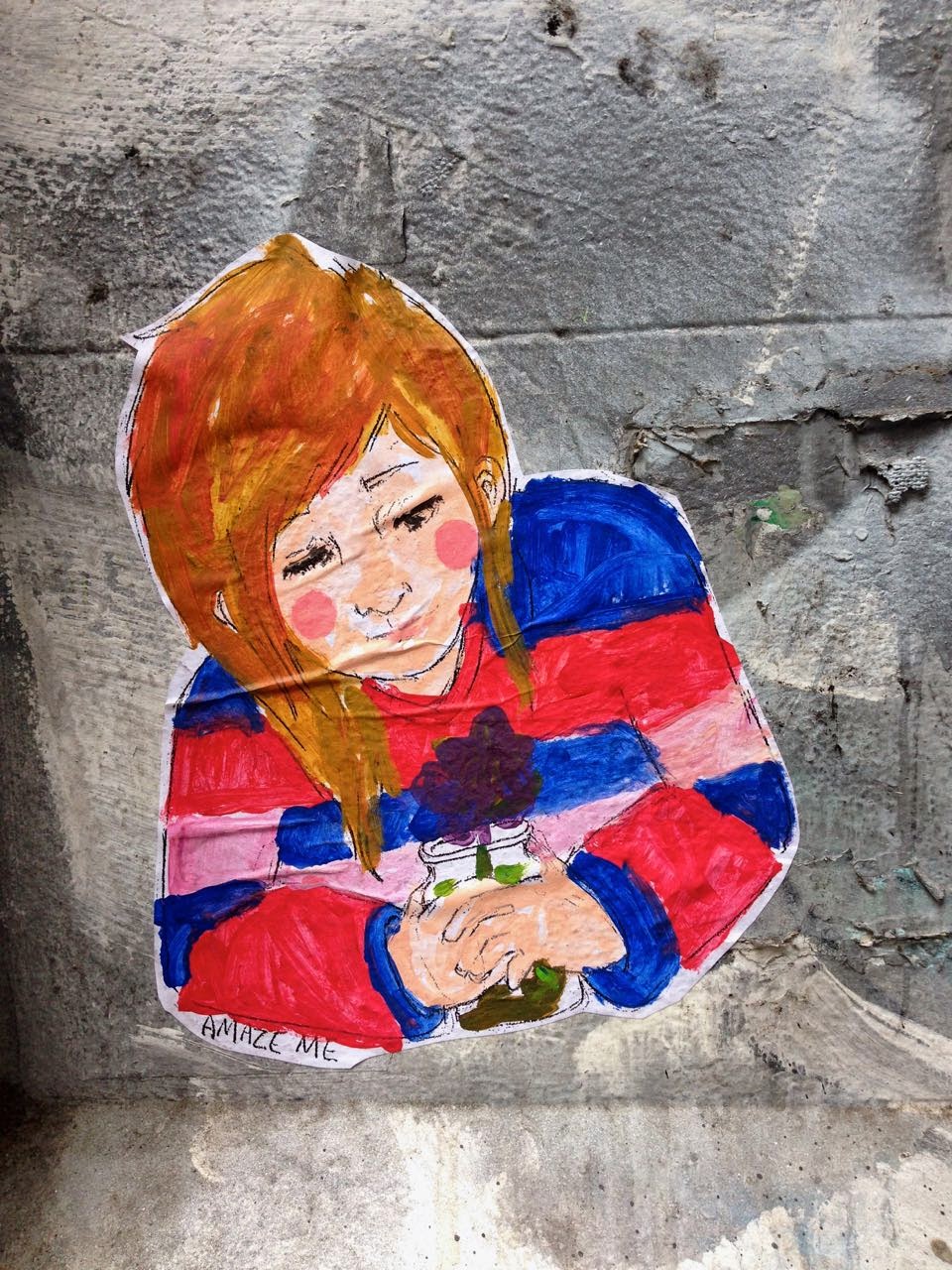 Despite the temptation to just sit in Raw Trader and enjoy the ambiance, I had much to enjoy in my rare childfree time in the city.  And I also really wanted a bar of chocolate or a packet of crisps after such healthy food.  (I feel terrible for admitting it but the coconut oil left a weird taste in my mouth that demanded to be overwhelmed by junk food.)  Fortunately I had some slices of apple in my bag to snack on.

Sutherland Street where Raw Trader resides, is a narrow little back street with heritage bluestone walls and a critical mass of interesting cafes.  I made a mental note to return there as I wandered away past the street art and back into the bustle of Elizabeth Street. 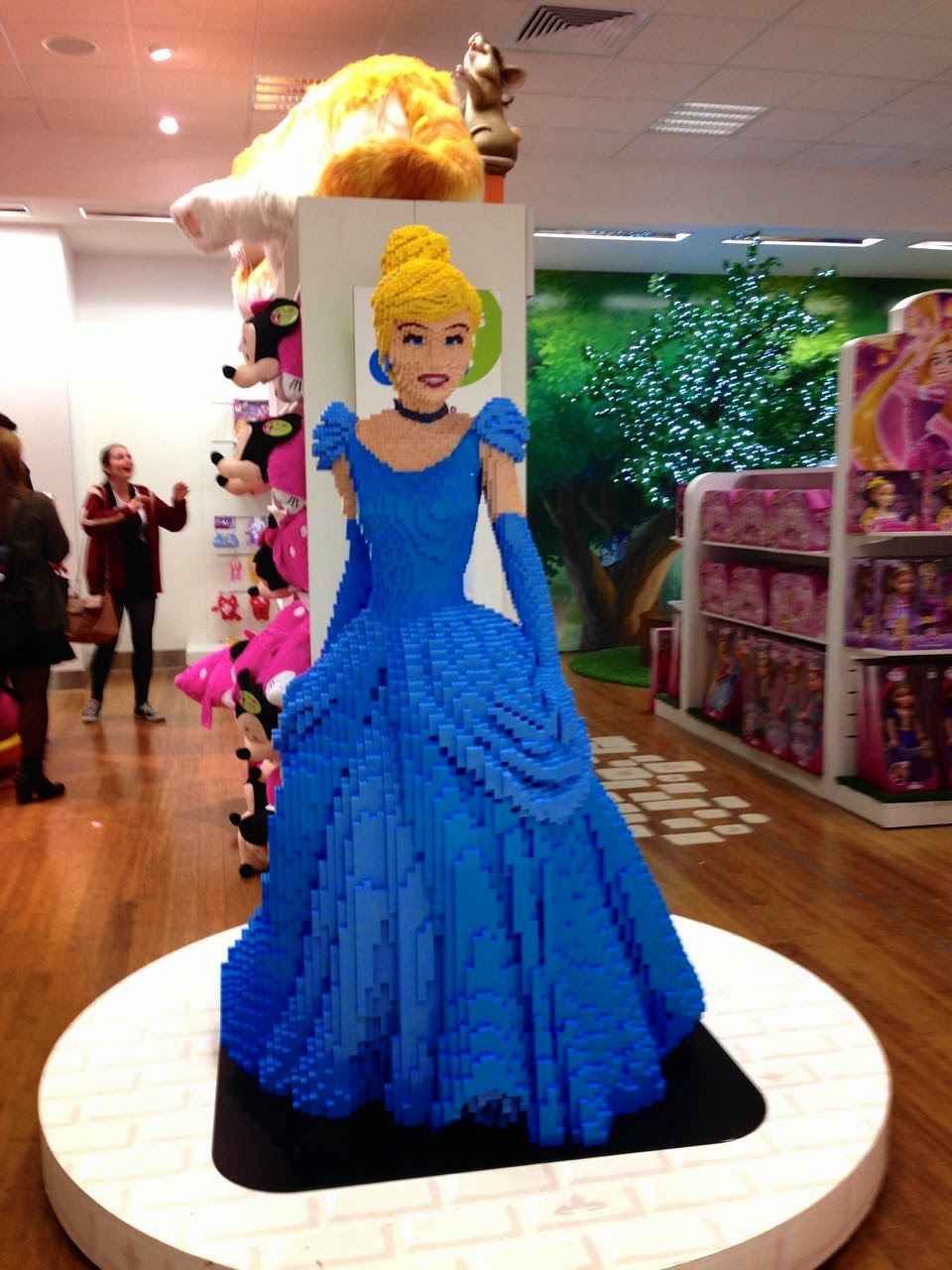 I had a quirky shopping list of shoes (check), handkerchiefs (check), barbie doll clothes (fail), girls knee high socks (fail).  I thought that knee high socks for little girls wouldn't be that hard to find but they seem as rare as potato starch (another hard to find item on my shopping list).  Once I had purchased some shoes for winter, I wandered the shops.  This life size lego Cinderella amused me in Myer.  Such a shame Sylvia wasn't with me to see it. 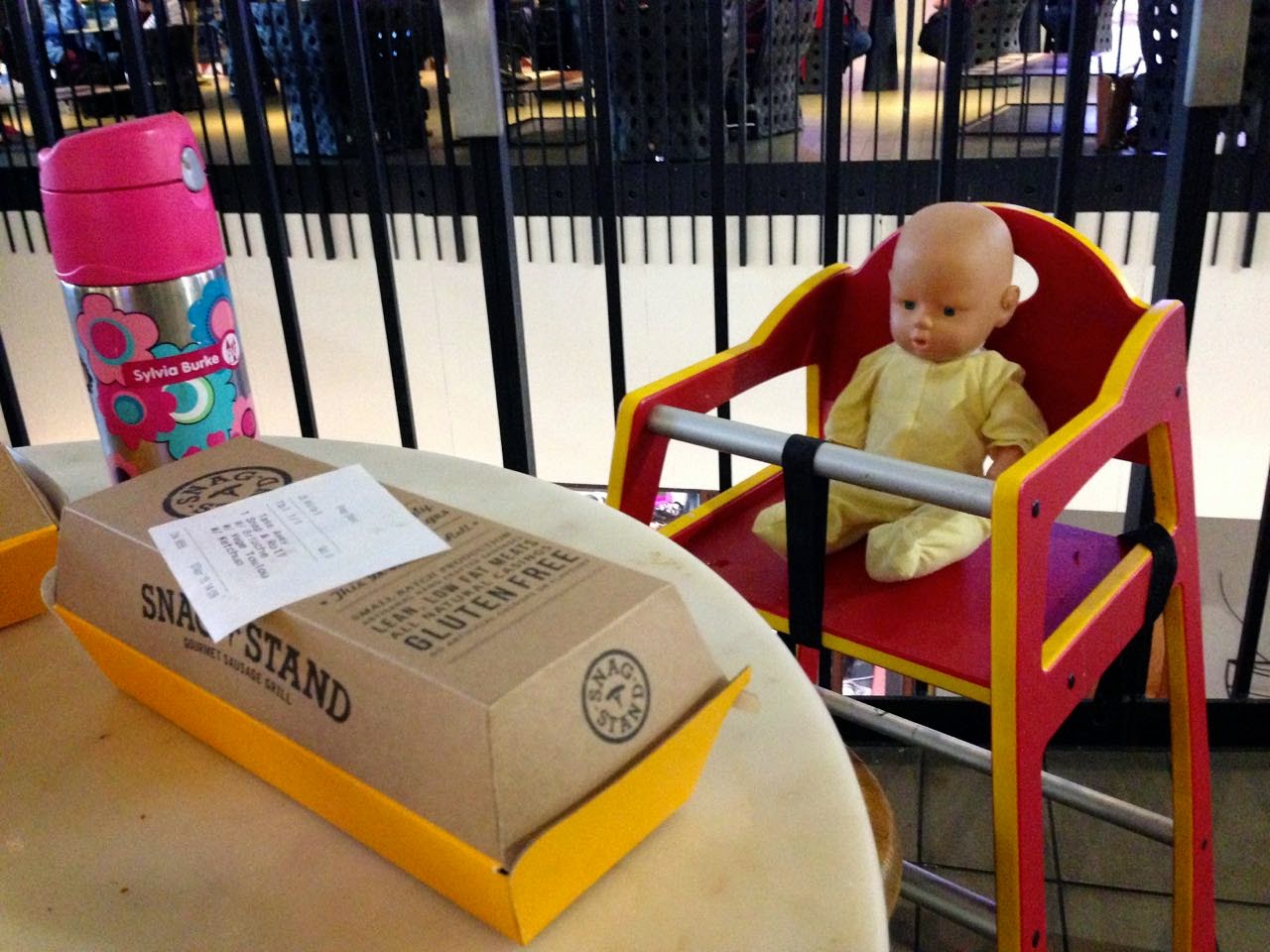 She was with her baby doll, Rosie, at the cinema.  I met her and her dad for lunch at the end of the movie.  We had hot dogs from Snag Stand.  They had seven options for the vegetarian hot dog which was impressive and seems more than when I wrote about Snag Stand three years ago.  I had Australia Fare and E had the American Classic.  Sylvia had The Kid (vegetarianised).  And we shared chips.  It was very nice (albeit lacking in vegetables).

Sylvia didn't want to hold Rosie so I let her put her in the kids highchair.  Because you need two hands to eat a hot dog.  I just hope no children had to sit on their parent's lap because Rosie hogged the highchair. 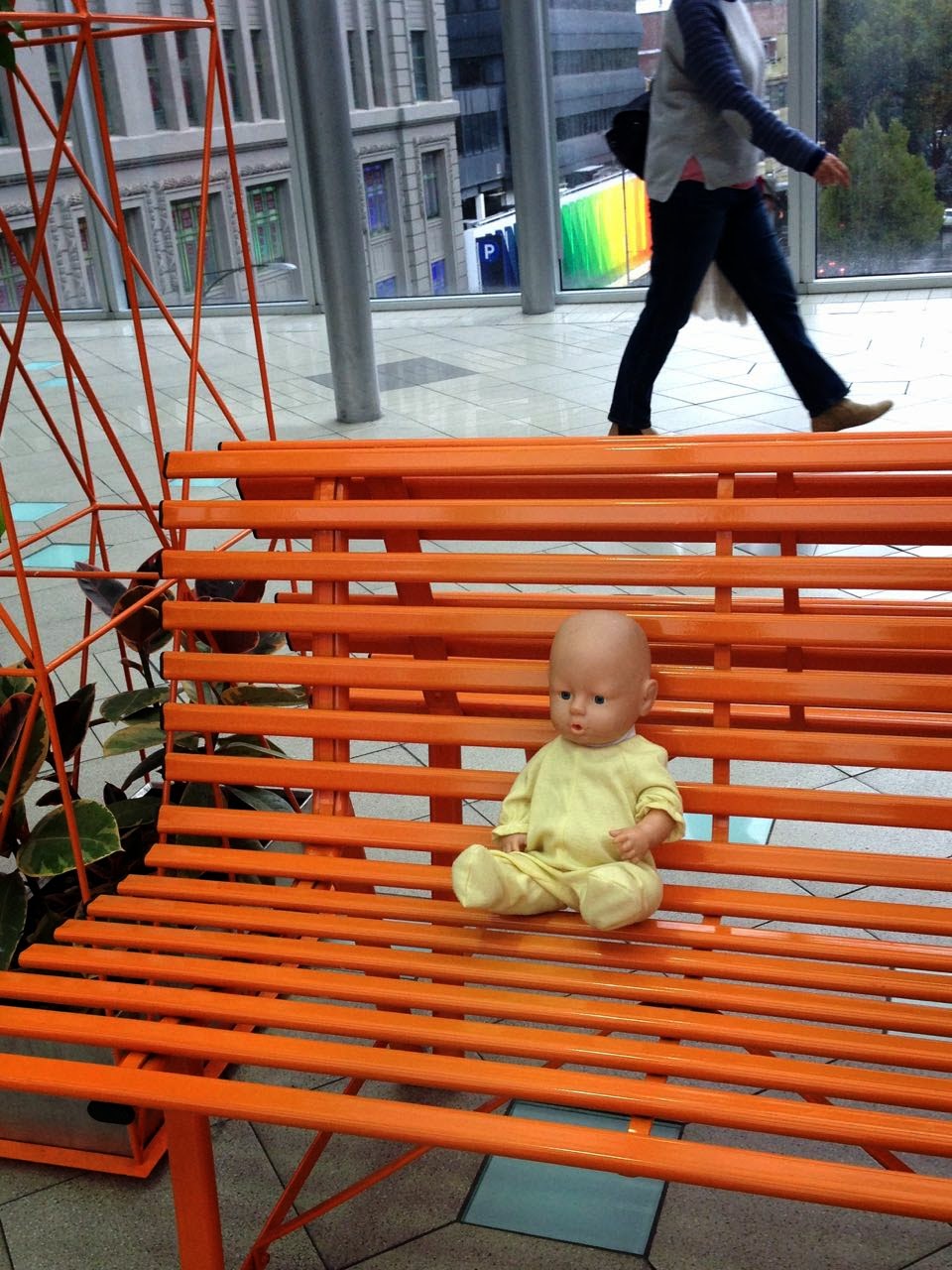 Next we wandered off to browse some shops in Melbourne Central.  While E and Sylvia were in the cinema the rain came on.  It was a delight to sit in the walkway between the Emporium and watched the rain fall on the city.  You can see Sylvia at the window in the top picture.  (Doesn't my little girl look so grown up!)  I particularly love the views from walkways between department stores and shopping centres in the part of the city. 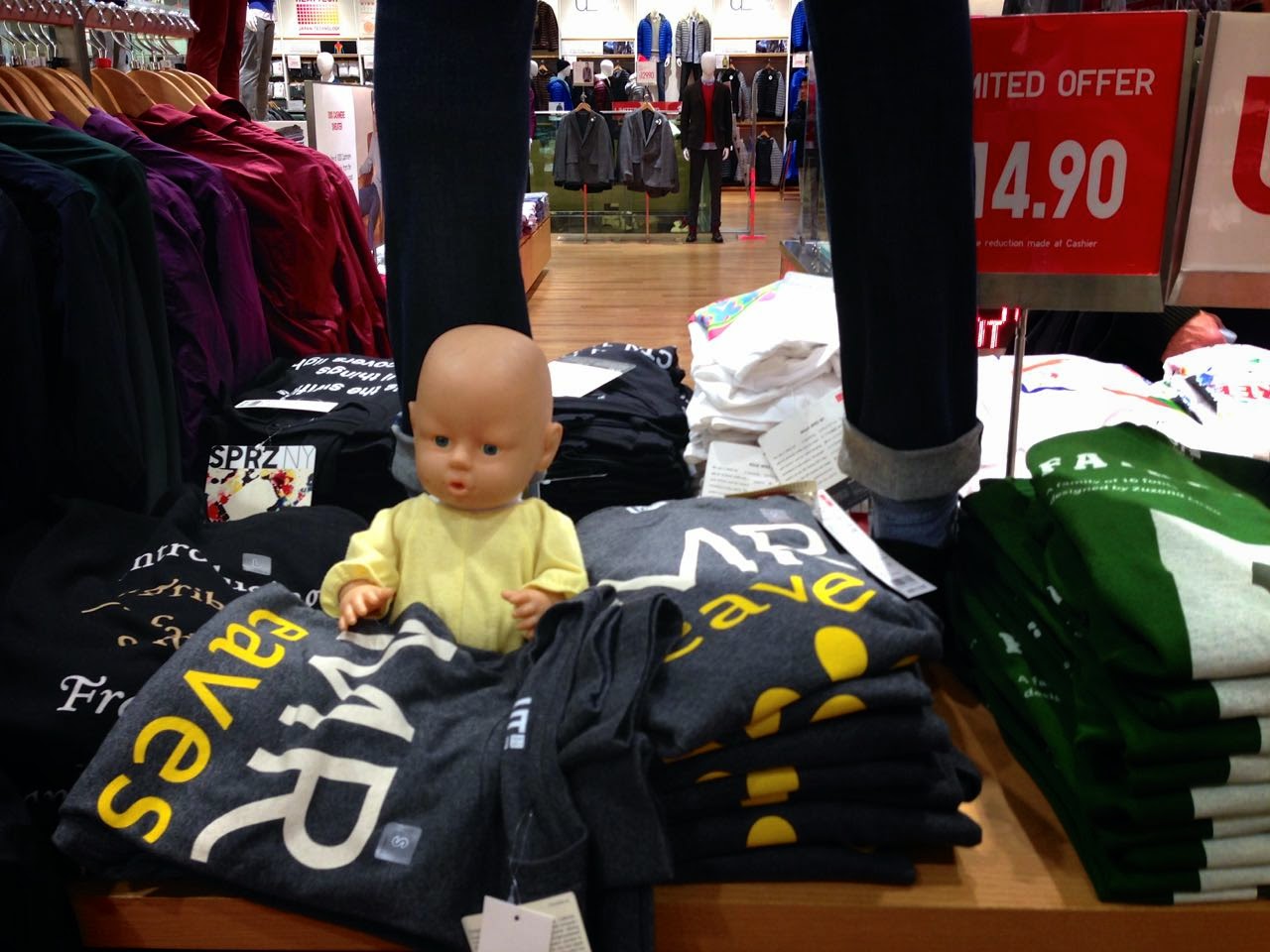 E's great desire was to have a look at the relatively new Uniqlo department store in the Emporium.  I was sure I was going to find girls knee high socks in a Japanese department store.  Not even there!  At least Rosie had fun snuggling in among the men's t-shirts.  And would you believe that Sylvia and I ended up spending more than E! 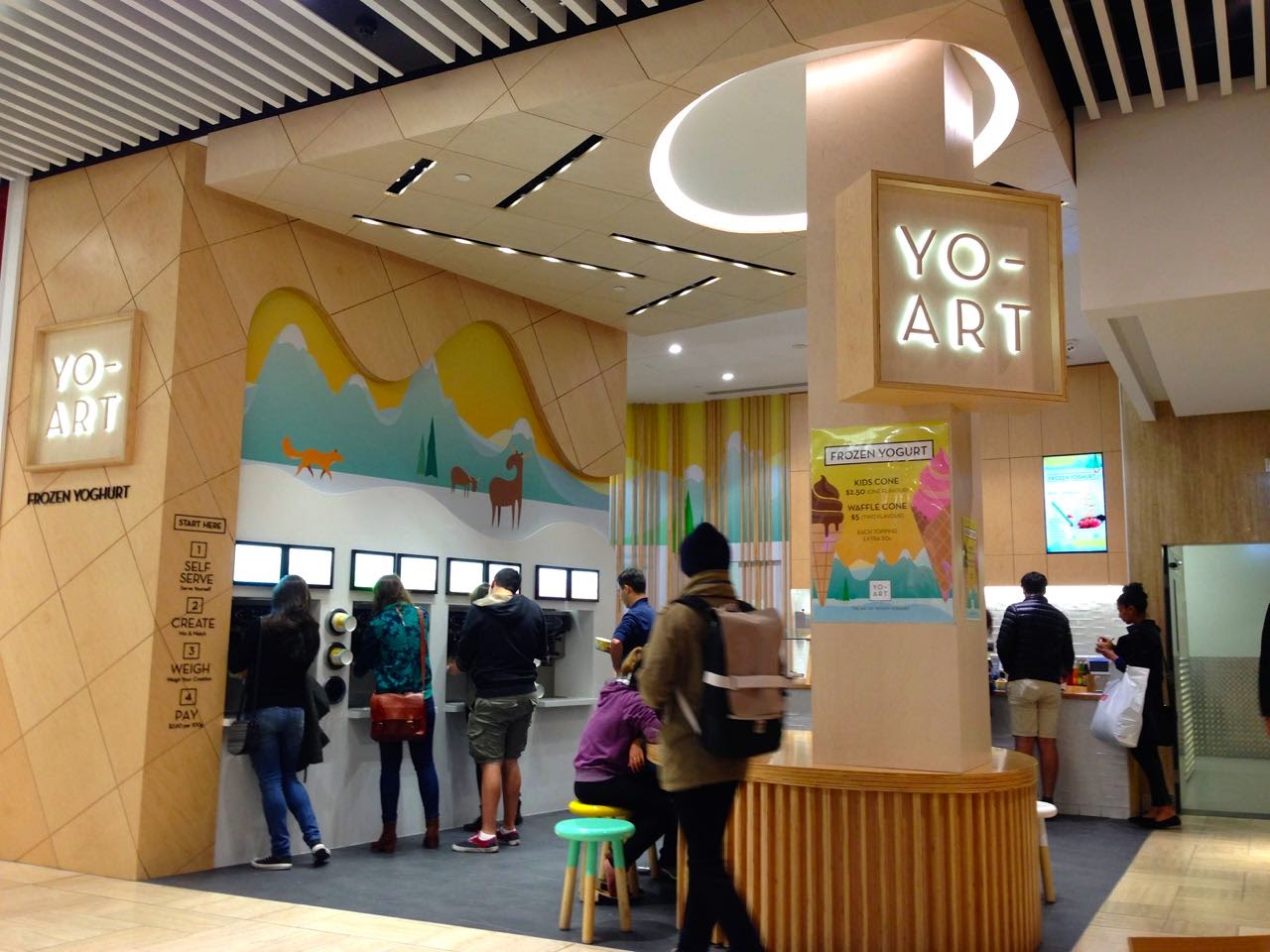 Before heading home we stopped for a frozen yoghurt at Yo Art (in the Emporium).  Well E and Sylvia had a frozen yoghurt and I just had a little taste.  They both chose salted caramel flavour and it was rather good with the sweet, salty, and slightly sour flavours.  E just had a few pieces of biscuit in his but Sylvia had lollies and sprinkles and a wafer. 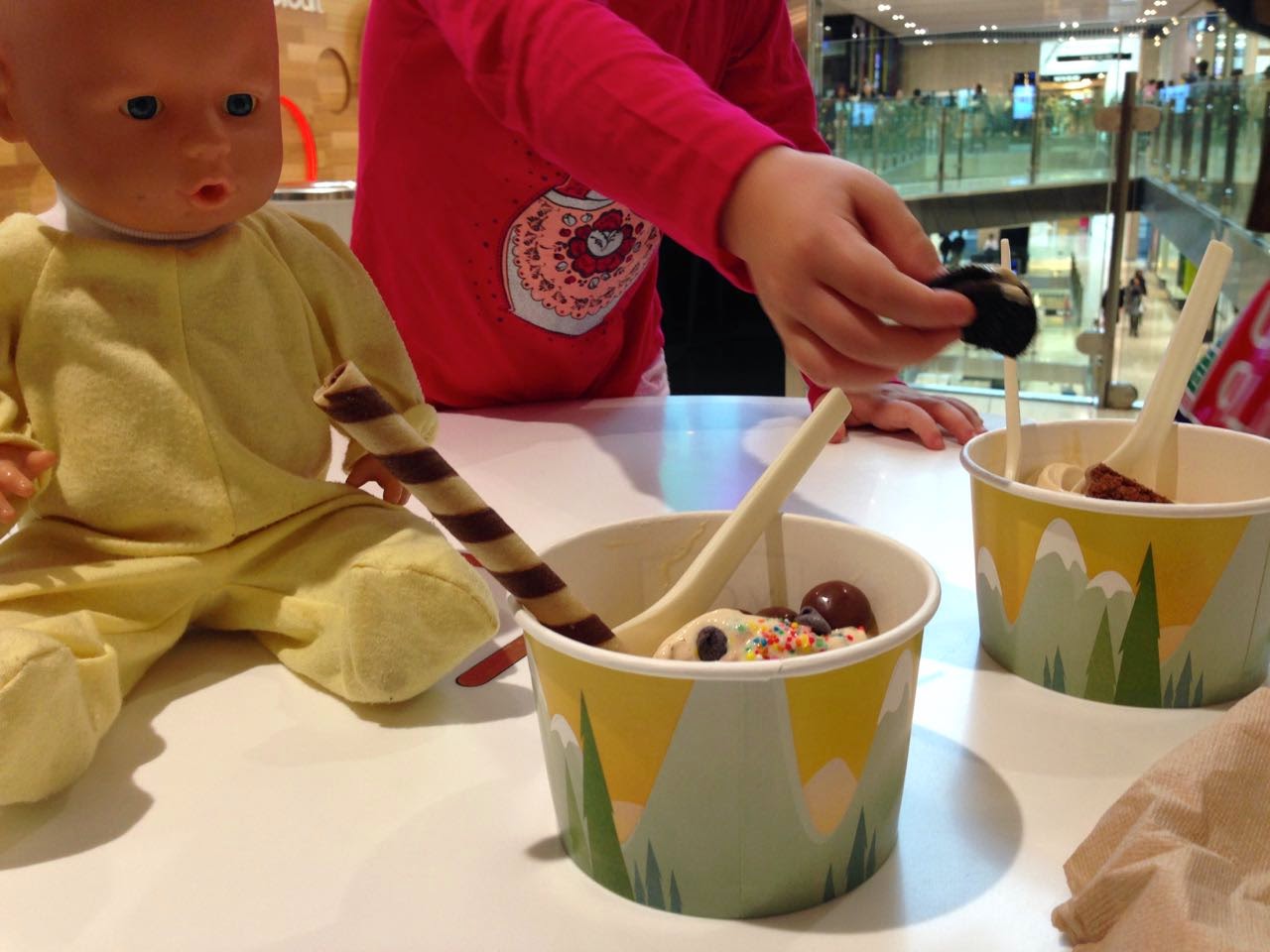 Then it was time for the train home.  We just missed our train and had to wait 20 minutes for the next one.  Curse the Upfield line with its single track in the last part of the line that prevents frequent trains.

We had fun waiting.  Sylvia is very interesting in reading anything that stands still and Rosie looks so real that another passenger struck up a conversation with us about believing that Rosie was my tiny baby. 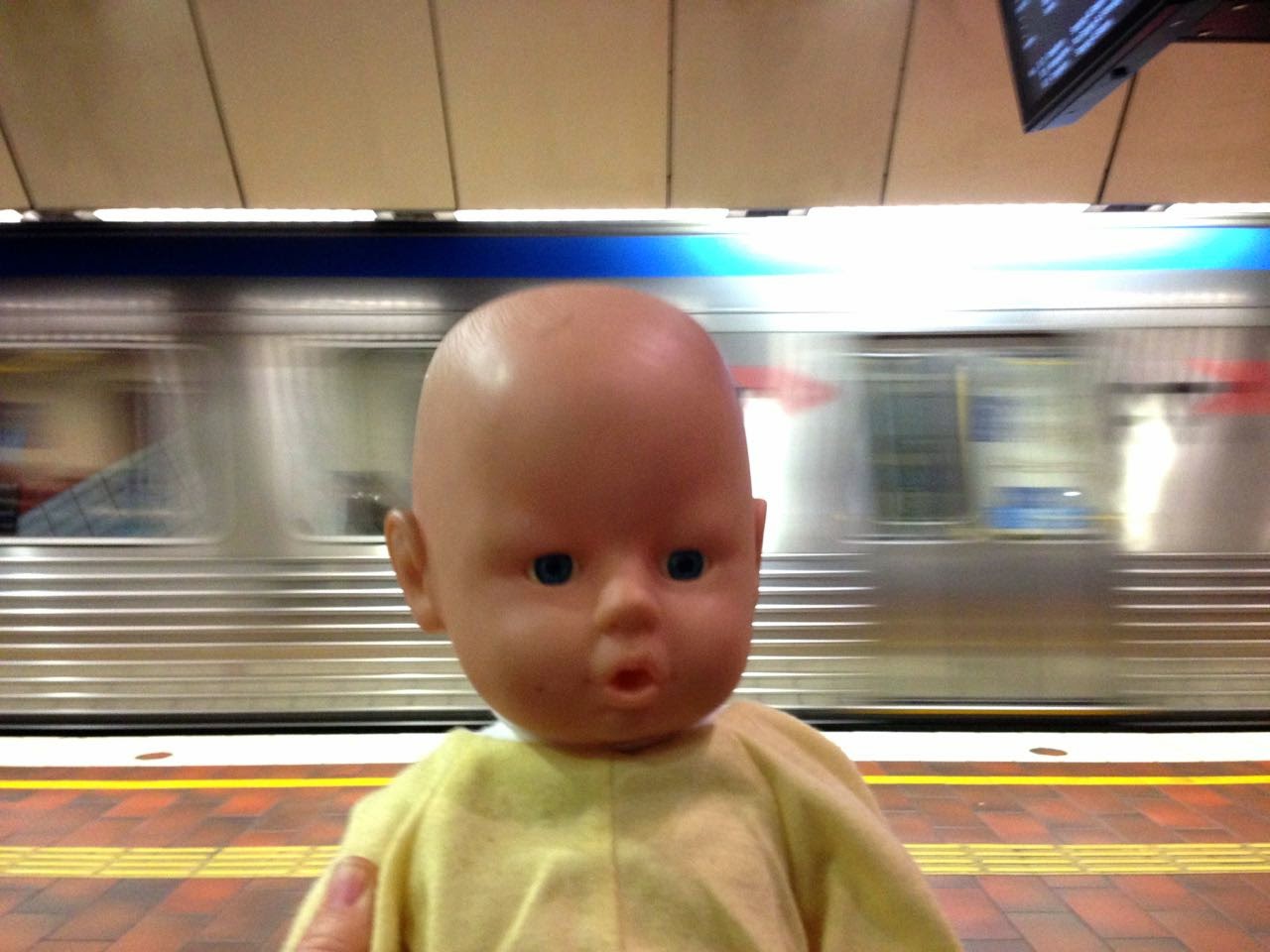 By then the trains were in their busy peak and we had to stand for half the trip (someone did offer Sylvia a seat but she was happy on the floor so I declined).  After digging out a pair of Doc Martens I hadn't worn for some time, I was very glad to rest my weary feet at home.