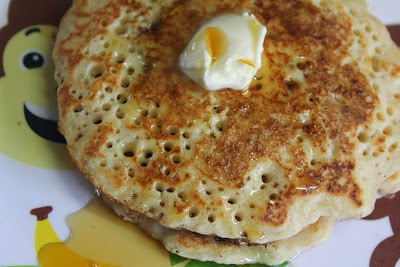 It is hard being the child of a food blogger.  You find a recipe you love but new recipes are constantly appearing.  Take pancakes for example.  On Sunday morning, Sylvia got up and decided we would have pancakes for breakfast.  After a busy previous day, it was wonderful to have a relaxed breakfast. 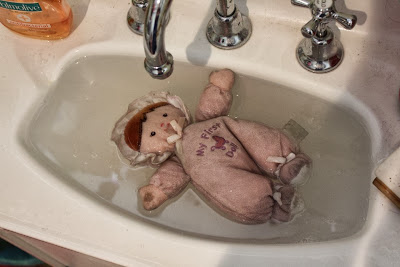 Before we started on breakfast, we attended to more important stuff.  We bathed Dolly.  It was warm enough for her to dry outside.  Hurrah for warmer weather.  (Which left as suddenly as it arrived)  Most of her stains disappeared and her white trim became whiter.  She was just about dry by lunchtime.  And it isn't even summer yet! 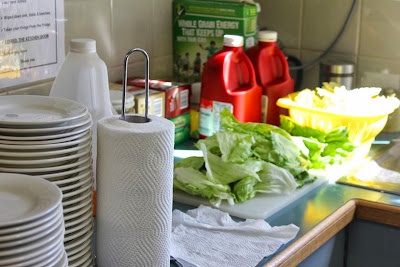 I can't mention the weather without telling you how glorious the weather was on Saturday for a community Mellow Music in the park.  I was there early for a couple of hours as a volunteer to help prepare food for volunteers and an AGM.  The first task I was given was to shred the flesh of a cooked chicken.  I asked for another task and was given the lettuce instead.  Phew! 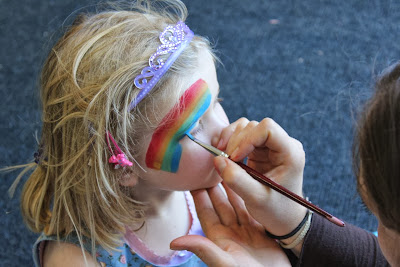 We were at the music event long enough to see E play ukelele to the early birds.  Then we headed off to Fitzroy Market so he could play with his ukelele group there.  We really love going to the Fitzroy Market but felt it lacked a little of its charm with the new site. But there were some great new food stalls.  I had a delicious falafel made by Palma's Pantry and a dense chewy chocolate cookie from Mumbles and Rumbles.  There was also ukeleles, waffles, face painting and the playground. 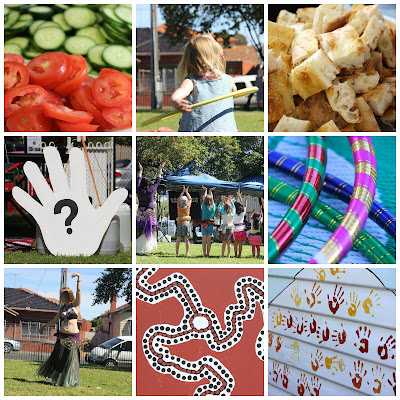 After the market, we headed back to Robinson Reserve for more Mellow Music.  We got back in time for the belly dancing.  Seeing all the kids get up to dance along was great fun.  It was very relaxing to sit under the trees on a warm afternoon, catch up with friends and enjoy the tunes of local musicians.  Kids put their handprints on the work-in-progress mural, Sylvia found the hula hoops and E was pleased to find some snags still available on the bbq. 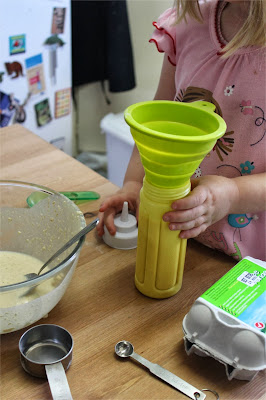 It was a busy Saturday.  So you see why a leisurely pancake breakfast was so welcome the next morning.  Sylvia wanted our regular banana oat pancakes.  I had a vegan buckwheat pancake recipe from here I wanted to try.  It seemed like a good way to use up my buckwheat flour until I discovered it was all gone.  By then I had promised we would make shapes with the pancakes so I found a thinner pancake recipe that.  So thin that it was quite easy to pour into a squeezy bottle. 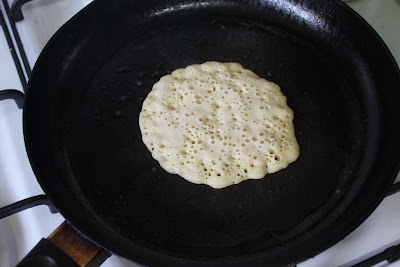 The pancake batter came out of the squeezy bottle rather quickly.  It spread too much upon hitting the pan to make shapes.  As you can see with my attempt at a lollypop below.  On the plus side, it made lovely light lacy pancakes.  Not quite as thin as crepes but more British than American.  We all gobbled them up.

The pancakes included wholemeal flour, maize flour (because I need to use it but cornmeal is what the recipe originally specified) and oats.  The original recipe fascinated me because it was for a gift pack of pancake mix, apple cider syrup and candied walnuts.  I wish I made those sort of gifts.  I wish I was given them too. 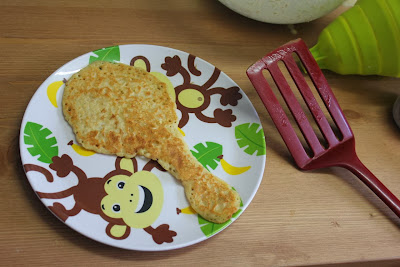 We have also had a few nice family outings in the West of Melbourne recently.  One to Scienceworks with my sister Fran and Stella and Ashy.  I was disappointed that the House Secrets exhibition was being replaced with another exhibition and there interactive displays in the pumping station (below) were gone.  We still had fun in the Nitty Gritty cafe. The highlight was seeing a show at the Planetarium.  Sylvia has been learning about the planets and stars and solar system at kinder so she was really into it.  And those chairs that lean back are great fun.

I didn't think the food was great last time so I made tofu-bacon and spinach muffins (leaving the spinach and onion out of half the batch for Sylvia) and chocolate almond and coconut balls (substituting ground popcorn for half the coconut).  We also took along lots of apple slices. 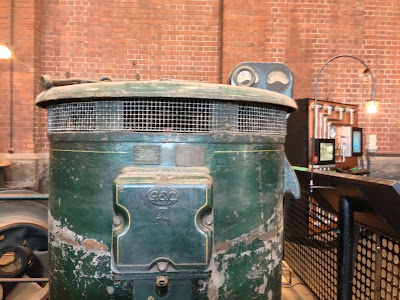 Then we had a family lunch for my sister Susie's birthday.  We went to a cafe called The Reading Room on the Footscray campus of Victorian University.  The food was very nice with lots of gluten free cakes.  I had a mushroom and pumpkin quesadilla.  It was lovely but lacking a bit of protein.  I wish I had noticed the savoury muffins earlier.  They would have been great with the salad.  The kids were fascinated by the typewriter.  The cafe has an extended menu on weekends.  We must return and try that some time. 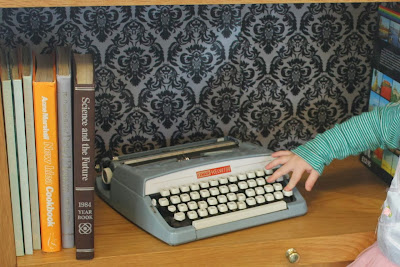 And now for a few random quicklinks that have made me sit up and take notice over the last week. 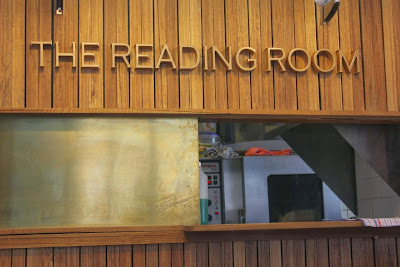 After a rambling post, my story ends on Monday morning.  Sylvia told me that she didn't like the pancakes we had yesterday so could we have her favourite pancakes today instead.  Cunning and clever.  But no pancakes on a Monday. Pancakes are what Louise of Eat Your Vegies and Vanesther of Bangers and Mash call Weekend Slowies.  That is the theme of their new blog event called Family Foodies and I am sending in these pancakes.

Previously on Green Gourmet Giraffe:
One year ago: Vegan Sweet potato and cheeze scones
Two years ago: Vegan Party Pies: Aussie "meat" pies for the footy
Three years ago: Pate, Goslings and Bubbies
Four years ago: All About Apples: history, culture and soup
Five years ago: Milestones and Rissoles

Blitz the oats in the blender to make oat flour.  Mix dry ingredients into a medium mixing bowl.  Lightly whisk maple syrup, milk and eggs into dry ingredients to make a smooth quite runny batter.  Pour batter into a squeezy bottle or jug (or use a mixing bowl with a lip for pouring).

Heat heavy based non-stick frypan over medium high heat.. Take a small knob of butter in a metal teaspoon and run it over the frypan until the pan is just covered with melted butter.  Pour 3 to 4 small pancakes or 1 large pancake into the pan, leaving quite a bit of room for spreading.  Fry until bubbling and flip over.  Leave another minute or two until golden brown both sides.  (I don't time this so this is an approximate time).

Eat warm with your favourite pancake topping.  (Mine are lemon and sugar or maple syrup and butter.)

On the stereo:
Yes Virginia... - Dresden Dolls
Posted by Johanna GGG at 15:10