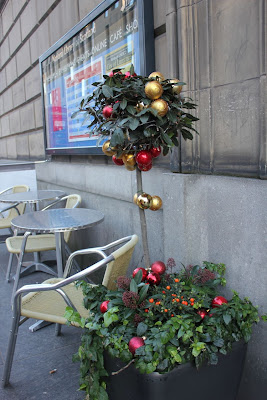 On one of our first days in Edinburgh we happened to be walking past the National Library of Scotland.  E had been interested in visiting and Sylvia was immediately attracted to the Christmas decorations.  The Christmas tree was up a flight of stairs so I spent time convincing Sylvia to come down while E wandered around at the bottom of the stairs.  Finally we sat to eat at the cafe. 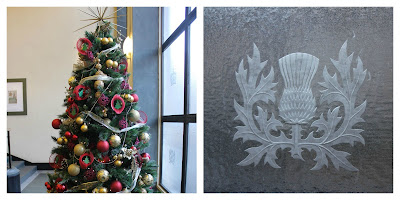 I was all prepared to eat millionaire's shortbread or another similar slice.  Then I noticed that in the refridgerated section, there were little tubs of cheese and grapes with crackers.  It seemed a great idea to snack on cheese and fruit rather than a sugary slice.  Sylvia and I shared this.  The vintage cheddar and brie were lovely but the Red Leicester (which seems quite common here) was less popular with both of us. 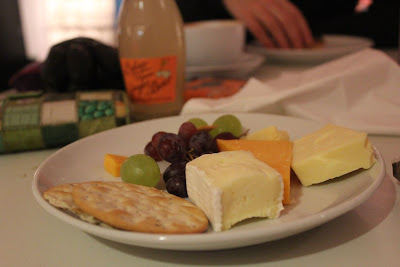 We chose a Belvoir ginger beer.  It was so spicy that Sylvia couldn't have much.  I had quite a bit but it burned.  Not quite what we expected.  E had a millionaire's shortbread that was nice.

The tables at the cafe were by the gift shop and shelves of books for sale, including some in Gaelic.  It was a nice space though it lacked any windows, which is a shame in the midst of the historic Edinburgh old town.  The shelves are a little bonus if you love bookshop cafes like we do. 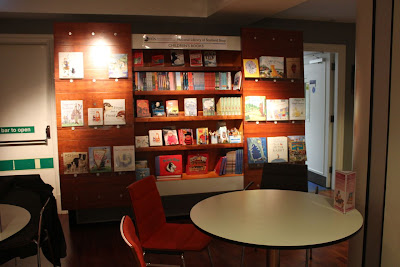 My main problem with the cafe was that it didn't seem to connect us at all with the National Library.  It just felt like a nice cafe - not terribly fancy - that just happened to be inside the library.  Perhaps it is just meant for those who are spending hours pouring over the books and documents in the library and can't go far for their cuppa.  Edinburgh's old town has so many fine places to have afternoon tea that I wouldn't hurry back to this one, but it was interesting to visit. 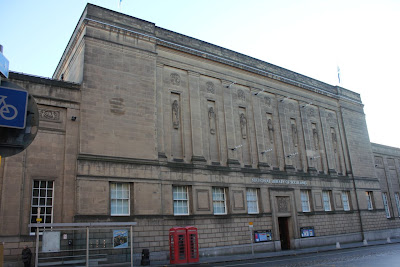 I took the top photo on the day we visited and the above photo early in the morning on another day.  That is why you don't see the tables and chairs out the front in the latter photo of the National Library of Scotland.  E has been surprised at all the places we have seen in chilly winter Edinburgh with seating outside.  Apart from the smokers, my guess is that they are a sign of a cafe being open for business.