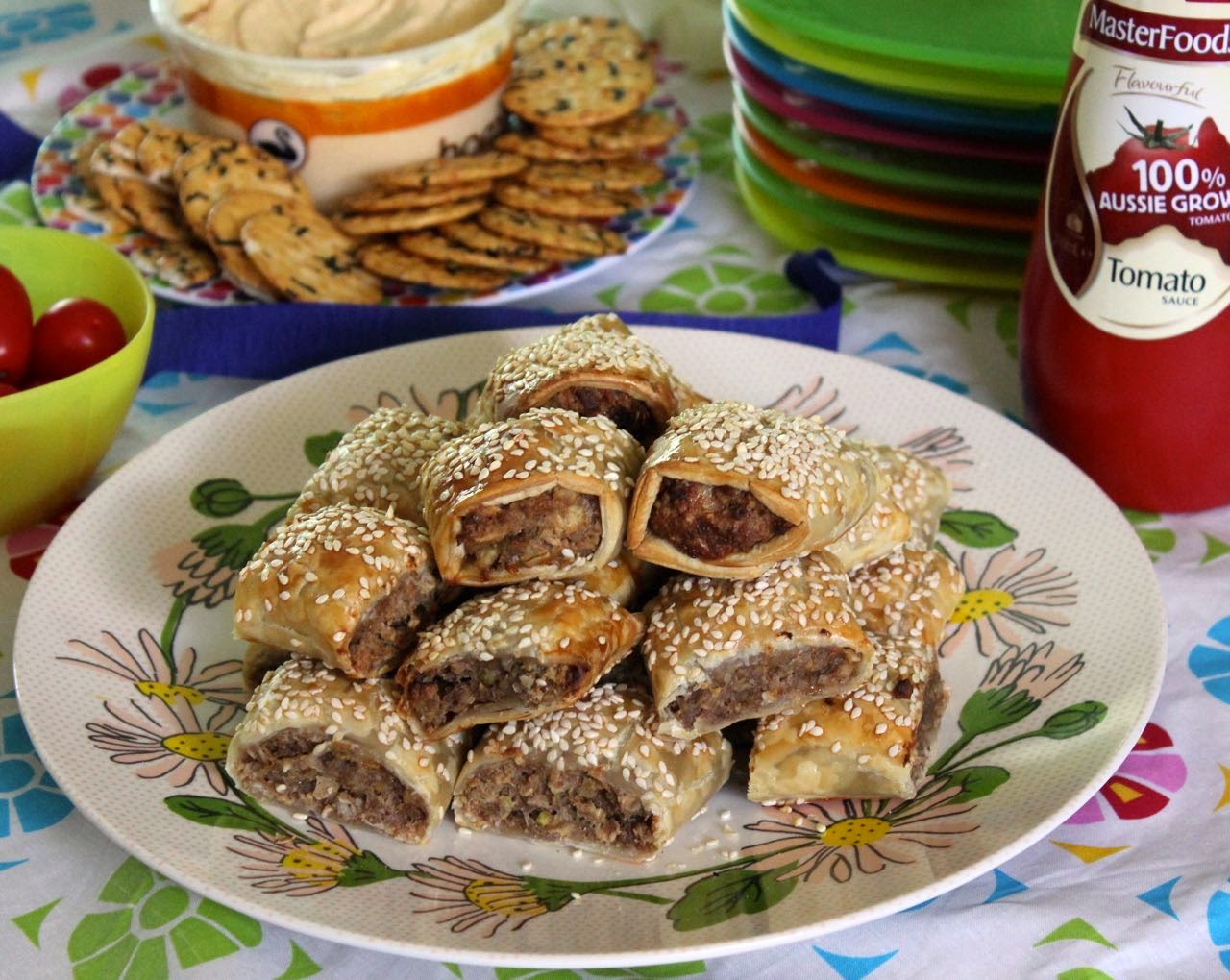 On the weekend I had a yen for sausage rolls. I mean the vegetarian variety, of course. Perhaps my neb at nut roast event has made me nostalgic for food from my childhood. Some might even argue that a vegetarian sausage roll is just a nut roast in pastry.

When I was too young to know any better and ate meat, sausage rolls were eaten at parties or just for light meals (or even sitting in a dressing gown in front of a soap opera, but I can’t mention names)! They were often offered as an alternative to meat pies which we called plasma pies (shudder of horror)! We usually had small sausage rolls that lots of little hands could grab and dunk in tomato sauce.

When I posted about making my version of vegetarian sausage rolls for party food last year, Cindy from Where’s the Beef kindly pointed me in the direction of the recipe she has been using for years. In her post Cindy remembers trips to the local bakery for sausage rolls. Such memories make me nostalgic for a time when I could stop at a bakery and eat any baked goods. I am of course nostalgic for the choice rather than the taste. 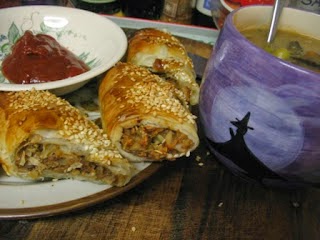 Many pie displays now include some sort of vegetarian pie but you still rarely find vegetarian sausage rolls when eating out. Cindy comments that this recipe should be shared with the world and, after finally making them, I can’t help but agree. It is easy and so delicious that I am sure there would be many takers if some enterprising person tried selling these. I thought the raw mixture was unbearably salty but when cooked it tasted so good. They are darker and richer than mine; closer in texture to that of their meaty cousins and packed with flavour.

The main problem is that these sausage rolls look so like the meaty ones that you could be mistaken for thinking they actually were. I mention this problem because it is easy to become paranoid about eating out when a vegetarian. Some meat eaters think it is hilarious to tell me the food they have just served up has meat in it, but it is too close to the truth to seem funny. Most vegetarians will have had the experience of being told that the stock is vegetarian, only to find bits of meat (or a ham bone) floating in the soup. 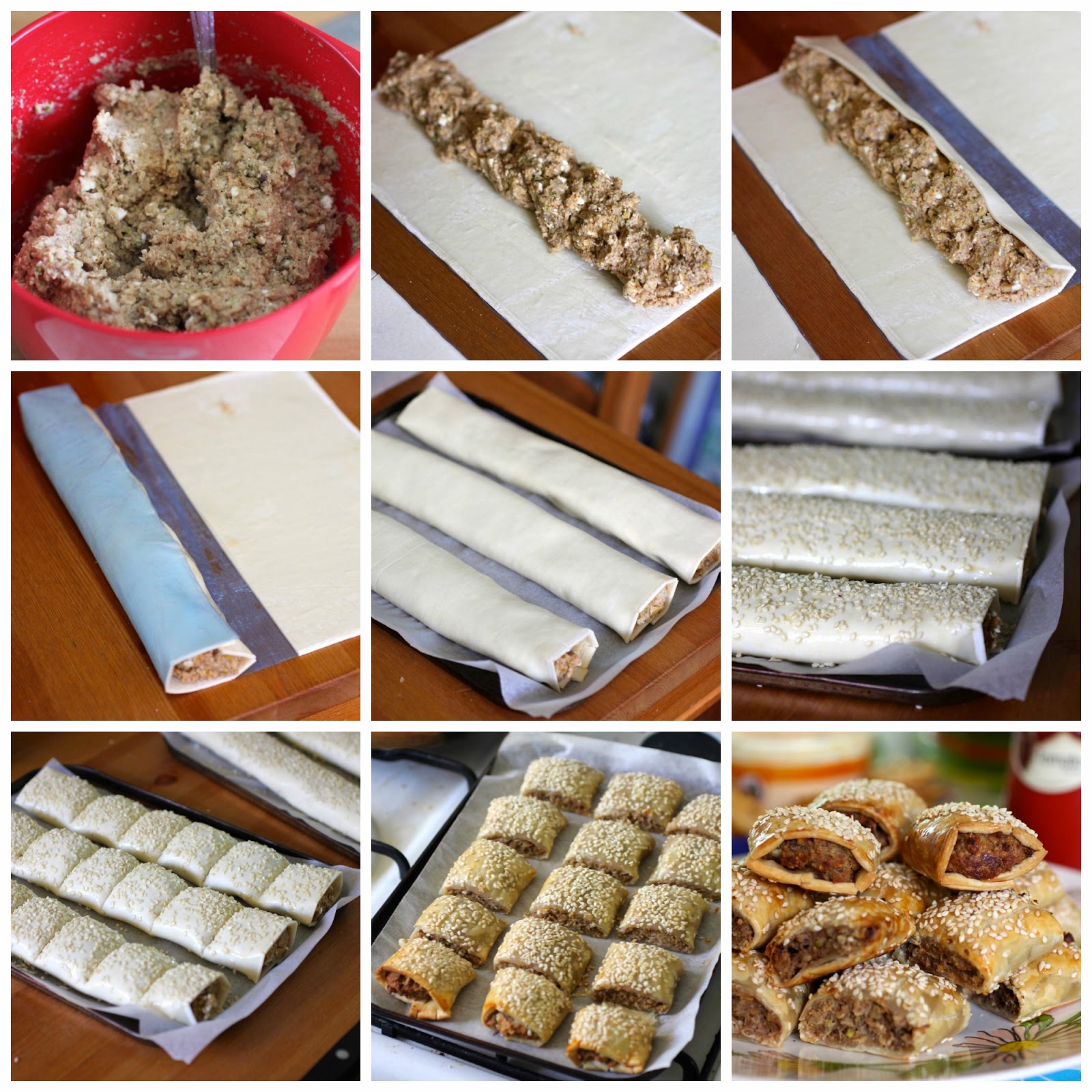 My mum has embraced the idea of choice and begun to make me some vegetarian sausage rolls when she makes meat sausage rolls but I worry she might mix them up. So I was inspired by the seeds on Cindy’s sausage rolls. I am now wondering if I should suggest my mum puts sesame seeds on my sausage rolls so it is easy to recognise the good ones! I know it seems obvious but it has just never occurred to me before.

Cindy’s sausage rolls with a mug of leftover mushroom stew were wonderful warming comfort food after a lazy Saturday. We even had a few for lunch the next day. This is an excellent version of a classic snack that I would recommend everyone try. Don't ask me who Liz O'Brien is because not even Cindy knows.

Finally, if you are looking for other ideas for filling vegetarian sausage rolls, you might like to try using the nut roast mixture from one of the recipes in the neb at nut roast round-up and baking it in pastry using the same method as in the recipe below.

Updates: I make these sausage rolls regularly so here are a few different versions:

To Make the Filling:
Combine all filling ingredients in a mixing bowl.

To Assemble:
Thaw 3 to 4 sheets of ready-rolled puff pastry. Place the first sheet on a flat surface and cut it in half, into two rectangles. Spoon the non-sausage mix down the centre third of each rectangle. Brush one long edge with beaten egg and fold in the long edges so the one with beaten egg overlaps the other edge.

Repeat with other pieces of puff pastry. Place sausage rolls seam down on a greased or baking-paper lined baking tray. Brush with beaten egg (or milk) and sprinkle with sesame seeds.  Make deep marks with a sharp knife marks to indicate where to cut them after cooking (halves, thirds or quarters).  (You can alternatively cut into rolls and/or make decorative slashes.)

To Bake:
Bake sausage rolls at 220C for 20 minutes. Remove from oven and cut into individual sausage rolls using marks you made before baking as a guide.  (These marks make it easier to cut.  Cutting sausage rolls partway through baking keeps the filling from drying out.)

At this point you can return sausage rolls to oven to bake another 10 minutes until golden brown and serve hot or set aside and bake for 10 to 15 minutes when you are ready to serve.  Sausage rolls can be frozen and baked straight from the freezer (about 15 minutes at 220 C).

On the stereo:
Cross: Tom Hall
Posted by Johanna GGG at 23:00