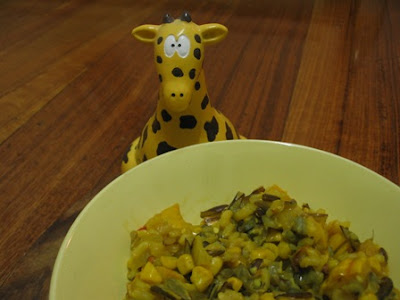 ‘Is the inside yellow because I want to make a yellow soup?’ I tried to explain to the stallholder. ‘Oh no,’ she chided me, ‘it should be just roasted or steamed.’ Thus was the incomprehension of the proud producer of gorgeous yellow heirloom pumpkins at a farmers market last weekend. Let us rewind so I can explain.

Last year around this time I was dreaming of having a blog. This was a time before I had experienced the kindness of other bloggers, before I understood what a blog event was, before I could join in. I read about the Taste of Yellow 2007 event and wanted to be part of the action. The round-up of 149 bloggers was truly inspirational. This year I find myself a veteran of many 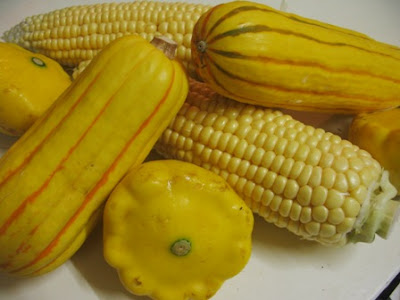 blog events and eager to join my fellow bloggers in a Taste of Yellow 2008.

A Taste of Yellow is held by Barbara of Winos and Foodies in honour of LiveSTRONG Day to promote cancer awareness. Barbara had experienced the shock and fear of cancer herself. I don’t think there are many of us who are untouched by cancer. I have seen it affect family, friends and work colleagues in various ways. Rather than write about the people whom it has touched, I wanted to think about yellow and why Barbara chose it. I thought I would focus on two yellow characters: Judas and the Smiley Face.

Yellow is the colour of Judas Iscariot, one of the 12 disciples who is best known for betraying Jesus with a kiss in return for thirty pieces of silver and thus giving up Jesus to be crucifixion and death. In medieval paintings he was represented in a yellow gown and in one webpage I found a claim that yellow is never used in churches because it is associated with Judas. It is betrayal rather than Judas’ cowardice that I think is symbolic of cancer. Cancer is the betrayal of our own bodies. Cancer betrays our belief that science and medicine can protect us. Cancer betrays our hopes for a good long life by striking us with a senseless illness and grief.

Yellow also is the colour of the ubiquitous Smiley Face. This is the cheery little yellow circle with two dots for eyes and a half circle for a mouth. The smiley face has had a few different meanings over the years. Where once it meant Acid House Music and drugs, today it is most often seen filling 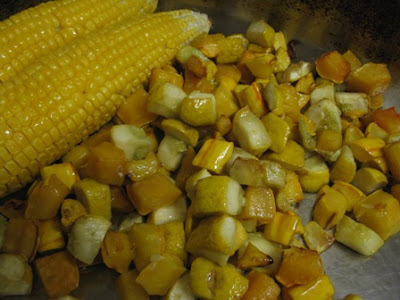 our computers with smiles. The Smiley Face is reminiscent of the innocent joy of a child’s picture. Yes happiness is the flipside of the betrayal of cancer. Cancer makes every little bit of happiness important. It might be the happiness of knowing others are supporting and helping us, of enjoying living while we can, or knowing how lucky we are to survive cancer. Sadly, sometimes the only happiness is in the memories of those left behind. But some happiness must eventually be embraced to go on.

So when I saw that A Touch of Yellow was on again this year, all I could think of making was Nigella’s Happiness Soup. I saw the recipe years ago on the telly and found it recently when I borrowed Forever Summer from the library. It is a simple soup of yellow zucchinis, lemon, basmati rice and turmeric. Nigella talks of the ‘sunny, mood-enhancing yellowness’ and quotes Claudia Roden who says that in the Middle East it is believed that eating yellow foods results in laughter and happiness.

By the time I started looking, the brief moment of yellow zucchinis had passed. Then the yellow heirloom pumpkins filled me with a hope that I could adapt Mandira’s recipe for Winter Soup with Butternut Squash, Acorn, Corn and Wild Rice, which I had been keen to try since seeing it on the No Croutons Required round up. This is why I was more interested in taste than colour as 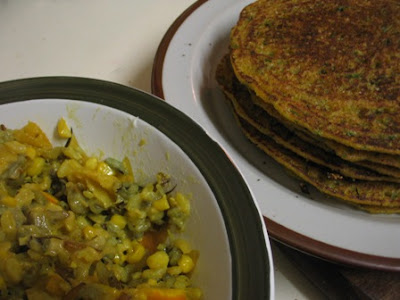 I talked to the market stallholder.

If you see Mandira’s recipe you will see quite a different looking soup to mine as she pureed the vegetables but I left mine in roasted chunks because I wanted to show some respect to these wonderful pumpkins. It was so thick that it was more like a stew than a soup so I called it a chowder. The vegetables were quite sweet with hints of lemon and spice. It went well with the dosa which were quite savoury. Most importantly, I was very pleased with the yellow colour and so was my giraffe. I hope it will bring a little happiness to Barbara.

Place pumpkin, squash and corn on the cob in a roasting tray and drizzle with 1 tbsp olive oil, salt and pepper. Roast in a moderate (180 C) oven for 1 ½ hour.

While the vegetables roast, cook the wild rice in boiling water for about 45 minutes or til cooked (I put the brown rice in after the wild rice had been cooking for 15 minutes).

When vegetables are cooked, you can choose to puree the pumpkin, squash and corn or you can keep them in chunks.

Heat the remaining tbsp of oil in a large saucepan and fry the onions for a few minutes til softening. Add the garlic and spices and stir for 1 minute. Add vegetables, rice and stock. Bring to boil and cook 4-5 minutes. Check seasoning.

On the Stereo:
His and Hers: Pulp
Posted by Johanna GGG at 20:42