The Nut Roast in History 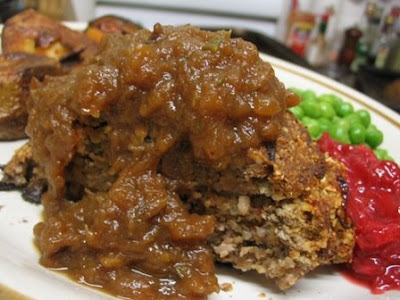 In discussions about my Neb at Nut Roast event, I have been asked about the history of the nut roast. As a vegetarian coming from a meat loving family, I sometimes feel sad at rejecting some of my culinary heritage. In response, I have combined reinventions of childhood dishes with vegetarian standards to create my own traditions. With that in mind, I set about researching the history of the nut roast and merging it with my family’s favourite roast dinner.

My first port of call was Colin Spencer’s The Heretic’s Feast which is a history of vegetarianism. I asked Lucy to check out her version and then my friend Yaz loaned me his copy. But it seemed to have only one mention of nut cutlets (a close cousin to nut roast) and most of it in the footnotes (p 298). Colin Spencer writes that the government used vegetarians, Mrs Leonard Cohen and Dugald Semple, to spread the message about vegetarian dishes in 1918 at the end of World War I. This was due to rationing rather than ideology and he notes that nut cutlets were 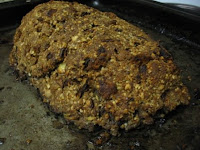 unlikely to make converts. He says that the nut cutlet recipes in Vegetarian Cookery by Florence A George in 1913 were tastier than most but that it seems odd to reject dead flesh and then ape it.

So I have to digress and once again defend the nut roast as even Spencer does not seem to get it. It is not odd to imitate meat if people give up meat on ideological grounds rather than taste. I don’t like the taste of meat and don’t think nut roasts taste like meat but I sometimes miss a central substantial dish that I can surround with my favourite vegetable dishes.

Next I checked the internet. There were a few British comments about the stereotypical vegetarian being a sandal-wearing, nut-cutlet-eating crank. This cliche goes back beyond the 60s and 70s hippies.

The best source of information on the nut roast in history was The Vegetarian Museum. It gives a few nut roast recipes from the first couple of decades of the Twentieth Century. Recipes on the site include one with a cup of raisins and another that sensibly encourages the use of leftovers in nut roasts. I was amused that one was from a book 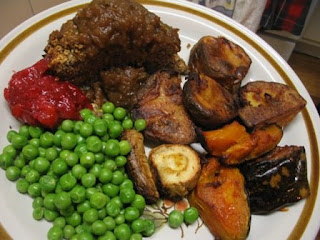 called One Hundred Meatless Dishes by Alice G. Schirmer which ironically was published by The Bacon Press in 1924.

One place where nut roasts were likely to have been served early last century was the Battle Creek Sanatorium in Michigan run by John Harvey Kellogg. He is best known for inventing corn flakes with his brother Will Keith Kellogg. Apparently John Kellogg believed that nuts would save mankind in the face of decreasing food supply. The food products sold by Kelloggs included ‘nut-based roasts and cutlets’. Guests visited the sanatorium from all walks of life visited, including celebrities such as Henry Ford and Johnny Weismuller. I can only imagine how important such substantial dishes as nut roast would be at a time when people believed that without meat you would become weak or sick. I’d like to find some of the early Kelloggs recipe books and check out his nut roast recipes.

It is often mentioned that the nut roast is a vegetarian Christmas tradition in the UK. Michael and Karen Iacobbo, who have written about the history of vegetarianism in America and founded the Vegetarian Museum, discuss how vegetarians are challenged by Thanksgiving traditions in 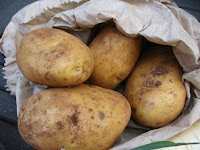 America. They suggest that a nut roast is a good inclusion in a gourmet vegetarian menu. On the site is an example of a glamorous vegetarian Thanksgiving dinner held in 1913 by socialite Mrs Maude Russell Lorraine Freshel, aka ‘Emarel’. On the menu is a Golden Rule roast which might very well have been a nut roast.

After all my research, I decided I should try one of these early nut roast recipes and chose a Michaelmas Loaf by Mrs Freshel from her Golden Rule Cookbook of 1910. I was intrigued by the method which is very different from the one with which I am familiar. Instead of baking it in a loaf tin, the loaf is moulded and placed in a roasting dish. It is then basted with a combination of water and butter. Basting is not something I am terribly familiar with and I'm not sure I basted as much as I was meant to. I enjoyed the nut roast but it was drier than my usual loaves which gives some clues as to 'the dreaded nut roast'. It sliced up nicely but desperately needed vegetables.

One oddity in the recipe was the 'saltspoon of pepper' in the ingredients list. I asked E if he had any clue as to what this meant. He told me his granny used to have a saltspoon which was like a little doll's spoon. So I found my little salt and pepper shaker set which I think I have had since my 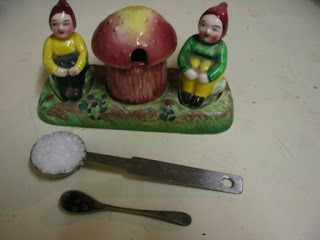 age was in single digits and used the little spoon from it. I think this is equivalent to a quarter of a teaspoon, but black pepper is really a matter of taste, so I don't think the quantities are too important. But I have a photo of my spoon beside a teaspoon and the salt and pepper set for your information and entertainment.

As I have said above, I married this vegetarian tradition with my family’s own. I served it with vegetables that my mum used to serve with a roast beef, lamb or chicken. I roasted potatoes, pumpkin and parsnip, which I have previously discussed how to do. For a treat I bought some fresh peas in their pods which my mum used to do on a special occasion. I made a port gravy which I did a bodgy job of blending but it tasted good.

The recipe suggested serving with cold apple sauce which doesn’t excite me (although my mum did used to do it with a roast occasionally). I had decided to make rhubarb relish

and it really worked well to lighten the dense loaf and intense gravy. Lastly, to complete the feeling of one of my mum’s meals, I served chocolate pudding for sweets.

I really did feel this was a good attempt at reinventing my mum’s meal in a vegetarian tradition. It was useful to compare the nut roast to the one I had made the previous weekend which was a lot softer and flavourful. I think nut roasts have come a long way since The Golden Rule but with lots of nice veggies it is still most delicious. I am putting this nut roast in to my Neb at Nut Roast event and am looking forward to hearing from you by 18 April with your nut roast.

Update: Since this post, I have found nut roast recipes in a cookbook of recipes enjoyed by George Bernard Shaw! Proof that it is a friend of the eccentric celebrity!

An American cookbook, Vegetarian Cook Book: Substitutes for Flesh Foods by E G Fulton (c. 1910) claimed that "The prevalence of disease among animals is leading hundreds of men and women to avoid flesh foods and to turn to the more natural diet of nuts, grains, fruits and vegetables." Apparently the main substitute for meat in the book was nuts. A few nut roast recipes from this book are reproduced here.

Michaelmas Loaf
(from The Golden Rule Cookbook by published 1910, by M.R.L. Sharpe a.k.a. Emarel Sharpe)
serves 6-8

Mix all loaf ingredients together in a bowl. It is quite a dry mixture. Use your hands to mould it into a loaf shape, although it did occur to me you could be creative with the shape you make. Place loaf in a well buttered roasting tin. Cook for 10 minutes in a moderately hot oven. Add water and butter to tray. Cook for an hour and baste frequently until loaf is well browned. Carefully remove to a hot serving platter and serve with brown gravy and apple sauce (or rhubarb relish).

Heat butter or oil in a frypan or small saucepan. Add onion, salt, sugar and thyme. Stir over low heat for about 20 minutes or til soft and carmelised. Add stock and port. Cover and simmer for about 10 minutes. Blend in food processor or with hand held blender. (I do mine in a little saucepan so I can just use the hand held blender). Check seasoning (mine was quite sweet and needed a bit of seasoning) and thickness. If it is too thick add a bit of liquid. If it is too thin simmer til it thickens a little. When it is just right, serve!

On the Stereo:
The best of: Bob Dylan
Posted by Johanna GGG at 13:05