In my kitchen: The Edinburgh edition 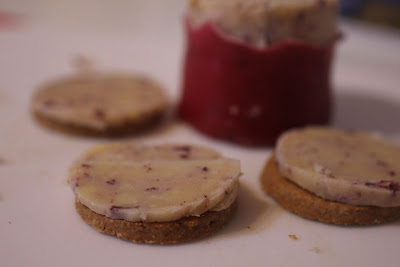 We arrived home from Scotland on Saturday night and are still adjusting to Melbourne time, bright summer sunshine and our currency (which is probably why I heard a cashier at the supermarket say that will be fifty dollars princess, and then upon thinking it odd found he had said that will be fifty dollars, ten cents).  We have put up our Christmas tree last night and made White Christmas at 6.30am this morning because Sylvia has her nursery end of year party today.

It is lovely to be home but we are still feeling quite tired and disorganised.  I had thought I might get all my Scotland posts up before Christmas.  Now I am beginning to think that maybe now I hope to get them up before Hogmanay.  Fortunately there is not a lot of cooking in our kitchen (thanks to my mum's kind food parcels), so there aren't too many other posts in the pipeline.

I miss all the lovely wintery sparkly Christmassiness of Scotland.  So I thought I would share some of the things (mostly) from our holiday kitchen in Scotland.  Above is the raspberry infused cranberry cheese and cheese oatcakes from Arran that I loved some much from the Edinburgh Farmers Market.  It would be perfect for Christmas breakfast. 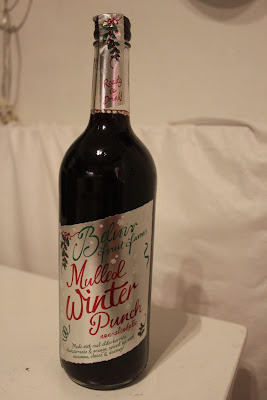 We came across quite a few fancy drinks by Belvoir.  This Mulled Winter Punch was my favourite.  We bought this bottle at Fallon and Byrne in Dublin and took it to Chris and Fergal's house to drink with dinner.  This warm non-alcoholic mulled wine was perfect to drink after a cold wet afternoon.  Even the kids could enjoy it.  Well Dash did.  Sylvia might have if she hadn't been having a jetlag meltdown. 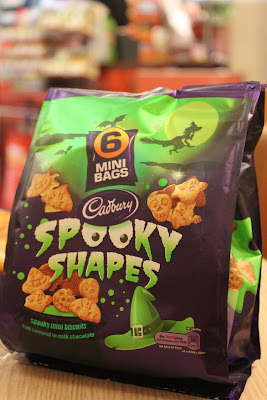 We also bought these Cadbury Spooky Shapes in Dublin because they were so cute.  I thought the actual biscuits were pretty dull looking but Sylvia and E enjoyed them for snacks while we were out and about. 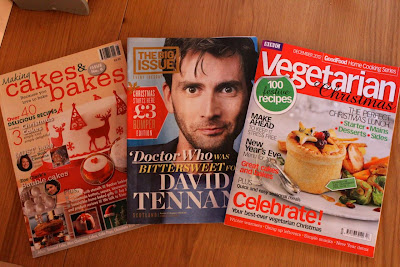 One of my regrets was not buying a Christmas (December) vegetarian magazine in Dublin when I saw it.  By the time I got to Scotland a couple of days later the January issue of that magazine was already out and it wasn't even December!  I did buy the BBC Vegetarian Christmas magazine.  I also was chuffed to find the Making Cakes and Bakes magazine.  I had been contacted by the editors who were kind enough to include me in their 5 blogs of note list.  I also couldn't resist a Big Issue with David Tennant on the cover. 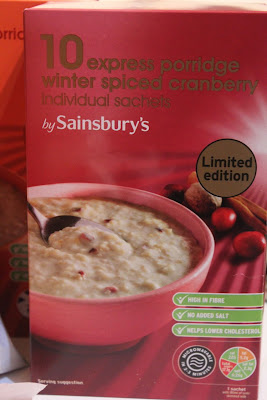 In Scotland our main source of food was the nearest supermarket, Sainsbury's.  I was disappointed I never got to the Tescos that I used to frequent but I did enjoy the huge Sainsbury's.  (I think E loves it so much he wants to live there.)  For breakfast E and Sylvia ate Sainsbury's porridge from sachets.  It was convenient and a bit odd that the flimsy paper sachet doubled as a measuring cup for the milk. 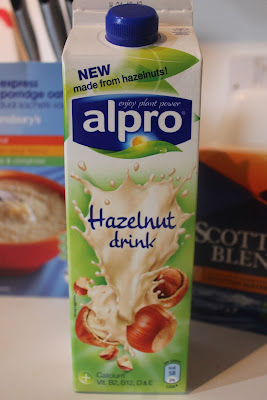 We started buying soy milk in the hope that Sylvia might drink some but it wasn't the purple carton she is used to so it just didn't appeal (sort of like she didn't like baked beans in square tubs).  So then I tried this hazelnut milk.  E quite liked it.  I had a wee taste and thought it almost chocolatey and quite sweet.  I liked it because it was fortified with Vitamin B12 unlike most nut milks in the supermarkets in Melbourne.  But it didn't appeal to me any more than any other milk so mostly went into porridge. 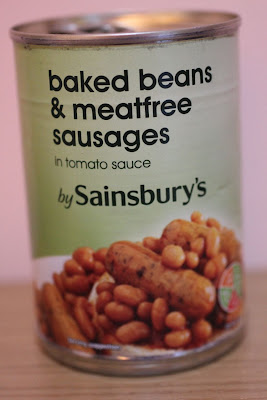 When I lived in London with a mum and her little girl, the 3 year old often had Heinz vegetarian sausage and beans.  I couldn't find a Heinz variety but Sainsbury's did one.  It seemed off to call it "meatfree sausages" rather than vegetarian sausages (though on the back it said they were vegetarian).  I quite liked them but the sausages were a bit intense. 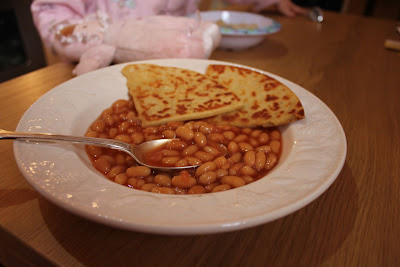 My favourite breakfast combination might well have been these fried potato scones with baked beans.  I bought the potato scones at Greggs when seeking change for the bus.  Strangely enough I don't know that I saw them again.  Are potato scones less popular in Scotland these days? 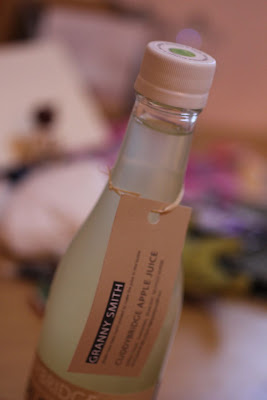 If asked what sort of drink she would like in a cafe, Sylvia would inevitably ask for apple juice (or irn bru but that is another story).  We even had a few bottles of posh apple juice grace our fridge.  I loved this Cuddybridge Apple Juice (Granny Smith) that we bought in Peebles. 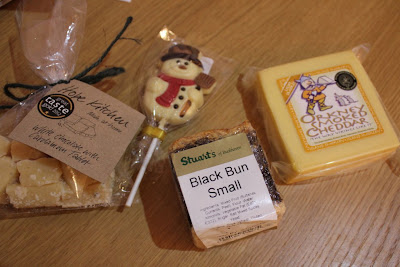 I plan to write a post about Jenners but here is a taster of the food hall offerings.  It was hard to resist all the wonderful food.  E chose the white chocolate with cardomom tablet.  Sylvia asked for the chocolate snowman on a stick.  I was intrigued by the black bun and Orkney Smoked Cheese.  Who could resist a cheese with the tagline 'the way Vikings like it'.  Sylvia called it tofu bacon cheese and was quite fond of it. 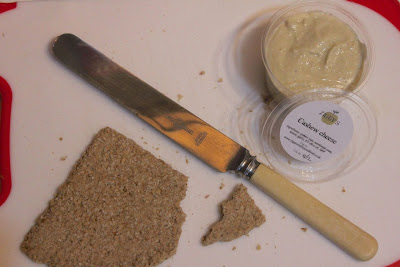 This is the vegan cashew cheese spread from the Edinburgh Farmers Market.  I enjoyed it most on naan bread (a surprising combination).  It was the sort of spread that worked well with oatcakes only if spread on quite thickly or it would get lost. 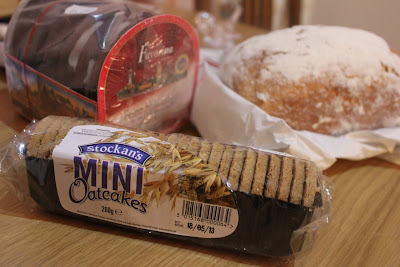 Here is our haul from Bunney's in North Berwick.  The soda bread was amazingly soft.  So so good and tasty.  I also sampled the Stockans oatcakes which were very good.  The chocolate lebkuchen on the other hand was odd.  It had chocoalte on one side and a white thick ricepaper sort of thing on the other that I didn't fancy.  Not quite what I had been expecting but very nice once I peeled off the ricepaper. 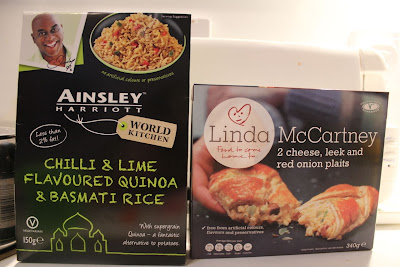 We ate dinner at either our flat or E's family's place.  The UK has always struck me as being great at convenience meals and hopeless at fresh fruit and vegetables.  Here are a few of the meals in boxes that we bought.

I wasn't that impressed with the Ainsley Harriott one.  It was a packet of rice and quinoa with a separate packet of herbs and spices.  I always have rice and usually quinoa in my pantry so the herbs and spices would be all I'd need but maybe it appeals to a different crowd.  On the other hand I loved Linda McCartney's cheed leek and red onion pasties.  Not so great with the rice and quinoa dish but fantastic with leftover roast vegies and also with stirfried vegies. 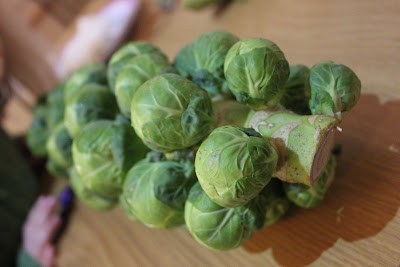 The one green vegetable that the UK does well in winter is brussel sprouts.  I am particularly fond of the brussel sprouts tree that you can buy in the supermarket.  So much fun to pick your own sprouts.  We ate quite a few of them.  I was also a fan of a Sainsburys packet of broccoli, beans, peas and mint butter that you could put in the microwave.  It was a tasty and quick green vegetable fix. 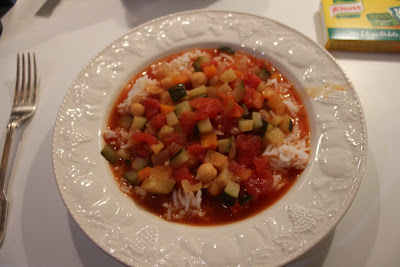 I didn't do much cooking but I made a few meals.  This rice, chickpea and vegetable soup was great after I had eaten too many rich meals and not enough vegetables. 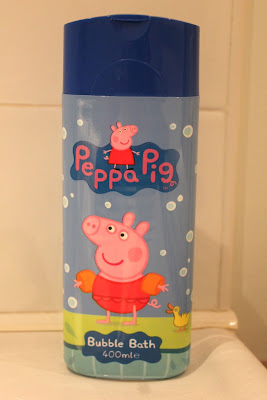 Peppa Pig bubble bath made it easy to entice Sylvia into a bath.  I might have been horrified at all the Peppa Pig merchandise if it wasn't such a novelty. 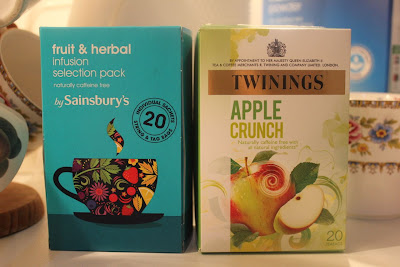 E, of course, bought his favourite Scottish Blend tea.  I was excited by new herbal tea flavours.  I chose the Twinings Apple Crunch and E chose the Sainsbury's fruit and herbal tea pack with flavours like cranberry, strawberry, raspberry and echinacea.  Lovely to have a cuppa in the evenings once Sylvia was in bed. 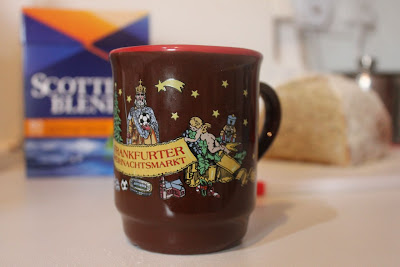 Unfortunately I don't think we used this cup from the Edinburgh Winter Wonderland.  (I will write more about this in another post.)  We should have enjoyed it while we could.  The cup broke in E's suitcase.  He thinks it is a sign that he should have bought another mug.  I think it is a sign that we have far too many mugs and no room for any more. 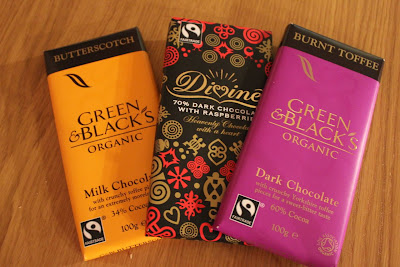 Sansbury's offered a lots of interesting chocolates we don't get at home.  I was excited by the Green and Blacks Butterscotch Milk Chocolate which was far more moreish and preferable to the Burnt Toffee Dark Chocolate.  I loved the Divine Dark Chocolate with Raspberries. 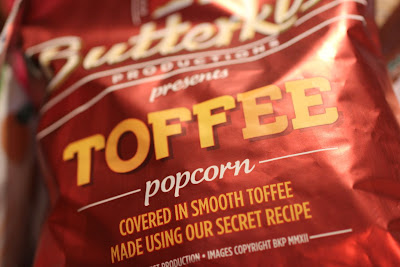 While browsing the foodie magazines in W H Smith, I read the gourmet popcorn being forecast as one of the food trends of 2013.  I hope so.  I've never been a fan of popcorn but suddenly am seeing it in a new light.  This toffee popcorn was delicious and luxurious (unlike the caramel popcorn given out on the plane).  I also loved the Cadbury toffee chocolate covered popcorn. 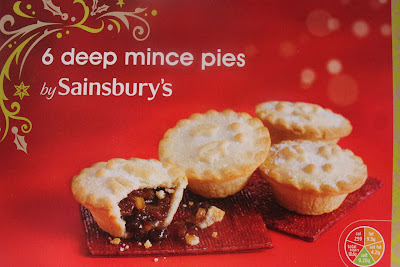 I kept seeing some gorgeous mince pies in some of the places we visited.  I should have bought a packet.  At least when I decided we needed some for our Christmas dinner, I was able to buy nice ones at Sainsbury's. 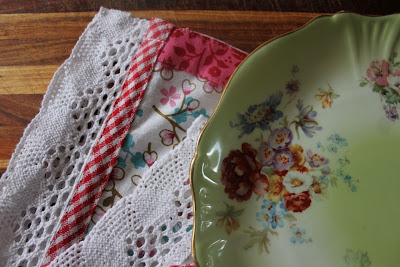 I was very restrained with buying for our kitchen.  We are already full to overflowing.  This gorgeous teatowel was from Avoca in Dublin.  I bought a few other teatowels but none of the usual tourist ones.  I was too concerned about plates breaking in my case, as well as being heavy. This plate came from a charity shop and I couldn't resist.  Thankfully it arrived home in one piece. 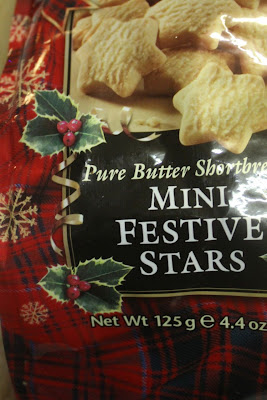 This packet of Walkers shortbread biscuits was bought in Melbourne yesterday.  I thought I would include it because it reminds me of Scotland.  Walkers and shortbreads are very popular there.  As are oatcakes.  I wish we could find oatcakes at the supermarket here too.

I am sending this to Celia for her In My Kitchen event.  Check out her Fig Jam and Lime Cordial blog for links to peek into more bloggers' kitchens.
Posted by Johanna GGG at 10:17