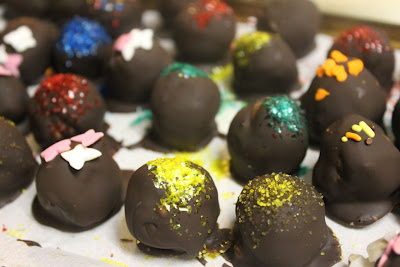 I am taking a break from my Edinburgh posts to share with you the only new recipe in my kitchen since returning home.  We made these chocolate gingernut truffles for gifts for Sylvia's child care.  It is an easy recipe for anyone looking for last minute Christmas gfit ideas. 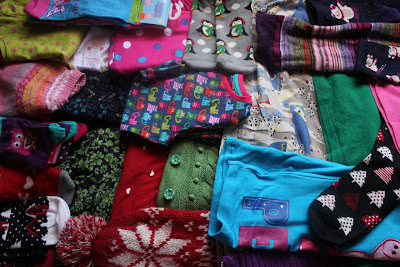 Easy is what I need right now.  It is hard to believe that this time last week we were just getting home.  I am finally getting over the jetlag but the house is still a mess.  Above is a photo of some of the clothes we brought back from Edinburgh. 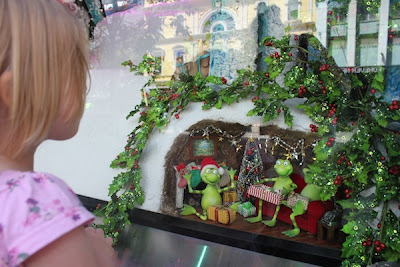 Fortunately Sylvia and I saw the Myer Christmas windows back in November.  Not my favourite year.  The windows are all about promoting a book that I have never heard of.  More the spirit of commercialisation than Christmas.  The queues are now horrendous.  If I had time to go to the city, I would love to see the Melbourne Town Hall Gingerbread Village. 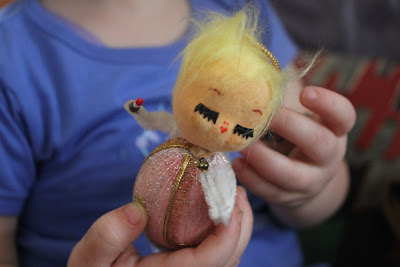 Our recent Christmas activities have been closer to home, in an emotional sense.  The day after getting home from Edinburgh we went to my mum and dad's place to help decorate the tree.  Sylvia jumped around with such energy that it was hard to believe she had only had 3 hours sleep the previous night.  At least she was fragile with my favourite Christmas tree oranament. 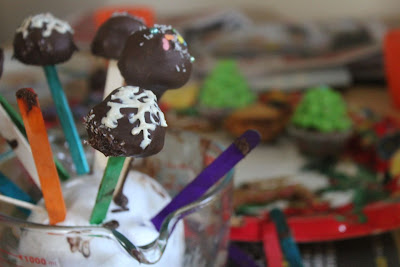 My mum and my niece Quin had been baking up a storm.  We had delicious nachos for lunch followed by these amazing cake pops, gingerbread men and christmas tree cupcakes (with strawberries inside the green icing). 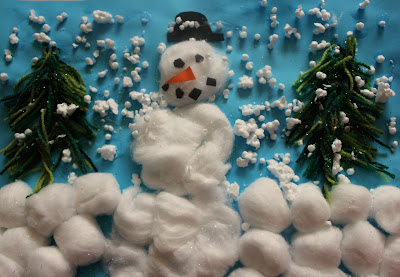 At home Sylvia and I had a craft session, making a snowman.  I had had this idea in my head for some time, prompted by some polystyrene packaging that Sylvia had enjoyed crumbling into snow.
I did most of this picture as she lost interest when we started but she enjoyed scattering the snow about.  I love the cottonwool balls snow and wool trees but might do less snow and more glitter next time.  (I am sending this picture to Red Ted Art's Blog for the Christmas craft round up.) 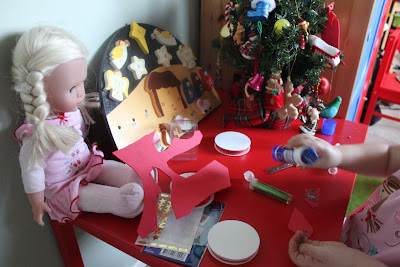 It seems Sylvia prefers her own craft ideas.  We bought a real Christmas tree on Tuesday from the Scouts outside Bunnings.  When we started to decorate it, I told Sylvia she could have a little plastic Christmas tree in her room.  She decided this was hers and the real one was ours.  She expected all the decorations would be on her tree.  Even with her little tree loaded, she decided to make some new decorations out of felt, glitter and ribbon. 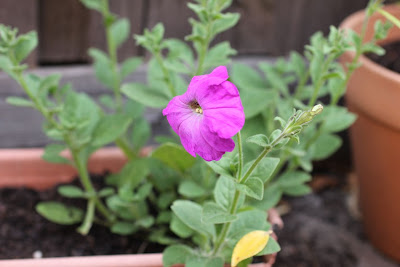 Coming home from a perfect snowy winter Christmas in Scotland to a summery Christmas at home has been somewhat odd.  Yet there are surely compensations.  One joy has been the first flower on our petunias.  This is the first plant I have grown from seed (last seen here) so it is very exciting.  In fact, it seems like just the sort of new life that Christmas is all about and has made me wonder what sort of Christmas celebrations we might have if it didn't fall in winter in the northern hemisphere. 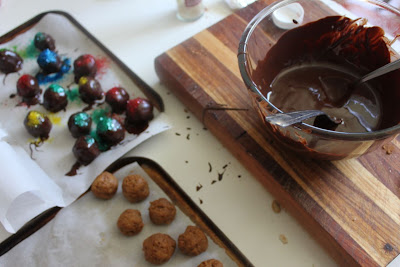 Cooking has been slow going since we got back.  My mum left us pizza and pasta.  Easy has been good.  I made stirfry and fried rice.  Again it is easy.  When I decided to make foodie gifts for some of the people at Sylvia's child care, we were after easy ideas.  I made coconut ice, white Christmas and truffles based on these pumpkin gingersnap truffles. 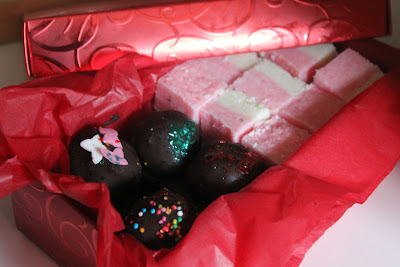 The truffles were simple and quick to make.  They tasted mostly of gingernut biscuits and I was wary of the amount of cinnamon so I decreased it.  The filling was rather soft even after staying in the fridge, and the chocolate coating seemed quite thin.  Maybe double dipping would help here.  I was a bit concerned about the recipients finding them rather melted if they weren't kept in the fridge.  But melted chocolate still tastes good.  At least it wasn't a scorcher on the day were gave them out. 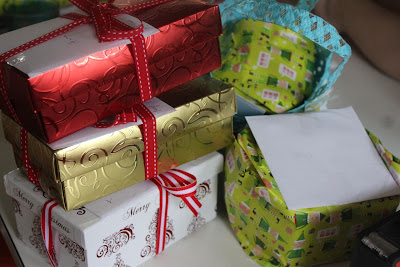 I am never sure about presentation for food gifts.  For the carers, we bought gift boxes and lined them with tissue paper.  For a few of Sylvia's friends we just bought some plastic tubs and wrapped those in wrapping paper. Then we took them to the Christmas party, along with a plate of white Christmas for the afternoon tea.  They were well received. 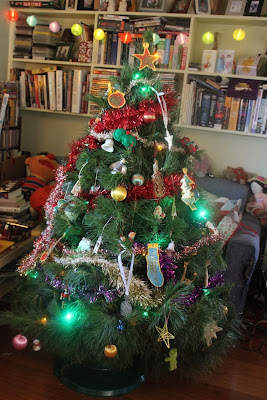 Sylvia had helped me decorate the truffles the previous evening before we decorated the tree.  I had thought maybe we could sneak one in with some festive punch as part of the fun.  This never happened because both E and Sylvia were so tired that they turned in for the night as soon as the tree was finished.

Probably just as well, given that the sweet treats didn't go as far as I had thought when dividing up among the boxes.  Maybe another batch might sneak its way into our kitchen before the festive season is over.  Energy permitting, of course.

Not a lot of energy around at the moment.  Fortunately I have almost two weeks holiday to try and regain some semblance of normality, if that is possible at this time of year.  I hope everyone else is enjoying the festive season.

Grind up biscuits in the food processor to make fine crumbs.  Transfer to a mixing bowl and use a spoon to mix in the cream cheese and purmpkin puree.   (After a while I used my hands which was an easier way to mix it.)  Roll into walnut sized balls and place on a baking paper covered baking tray.  Put tray in the fridge for a couple of hours.

Melt chocolate with the cinnaomon and ginger.  Dip gingernut balls into chocolate until covered.  Drain on a fork and place on tray.  Scatter with sprinkles immediately and leave to set.  Store in fridge.

On the stereo:
Christmas Cocktails II: Various Artists
Posted by Johanna GGG at 23:26