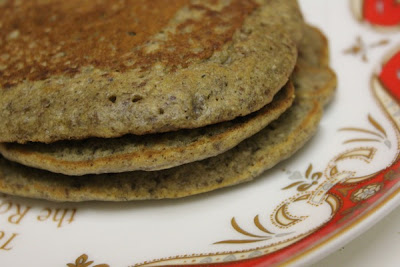 It has not been a good week for bread.  I meant to make some during the week but I found I didn't have enough flour.  Then I meant to buy some at the shops and clean forgot.  That is my excuse for making pancakes after dinner last night.  After all, if you can't have some bread with dinner, pancakes for afters will suffice very nicely. 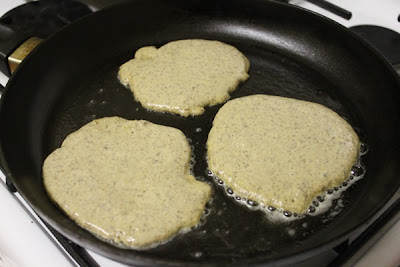 The pancakes in question were from a Diet Dessert and Dogs recipe that Ricki called Quick and Easy, High-Protein Single Serve Breakfast Pancakes.  I have had it in mind over the last few weeks since I first saw it.  I am always impressed by the creative use of gluten free ingredients and interesting flavours in her recipes.  My kitchen is quite different to Ricki's, so I made some changes.  I don't have protein powder in my pantry, I find buckwheat flour easier than grinding groats and I used coconut sugar rather than stevia.  I also forgot the cinnamon.

The mixture was quite unlike any pancake mixture I have used before.  It was quite thin at first and then became rather thick but it made thinner pancakes than Ricki's.  Nevertheless it came together really quickly.  It was ready to eat by the time Sylvia was out of the bath. 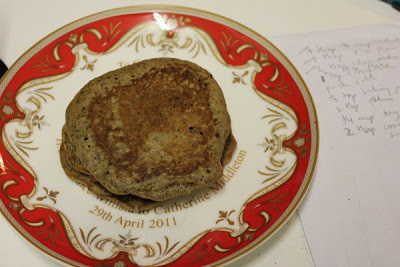 I served it with a little margarine and maple syrup.  Sylvia loves maple syrup so I expected her to enjoy them but she wouldn't eat the pancakes (she did try to lick the maple syrup off).  E on the other hand was a big fan.  I think he was surprised to hear they were vegan and gluten free.  The pancakes weren't very sweet but they were very substantial and a great way to finish the meal.

I am sending these back to Ricki for her Wellness Weekends.

Mix all ingredients together. They will be quite thin at first but after a minute or so they will become quite thick. Heat a large frypan and melt butter or swirl a little oil. Drop 3 generous dessertspoon of mixture into the frypan to make three pancakes and spread a little with the back of the spoon. Fry for a few minutes until a few bubbles appear on the surface (but not as may as regular pancakes) and it dries out slightly. Flip over (should be golden brown) and fry another minute until browned on the other side. Repeat with remaining mixture. We served ours with a little nuttalex margarine and a drizzle of maple syrup.

On the Stereo:
The Love Songs of Burt Bacharach: Various Artists
Posted by Johanna GGG at 23:06