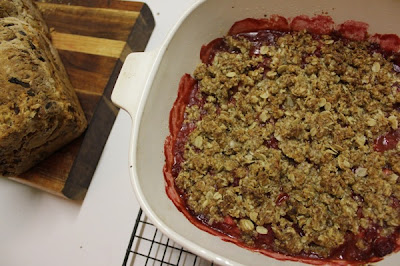 On Friday night our phone line went down.  I had emails to send, comments to respond to and blog posts to write.  Instead we had a weekend without the internet.  We missed it.  I am now feeling rather behind.  So while I wait for our phone company to fix the fault, I will share an excellent rhubarb and strawberry crumble I made on the weekend. 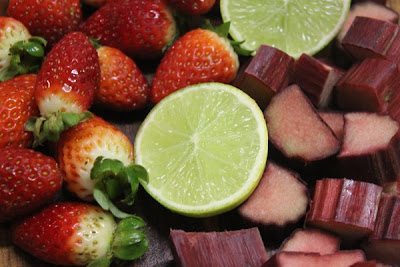 It was a busy weekend of high tea, a lost umbrella, welsh rarebit, the arrival of fire engines at the local supermarket (false alarm but still exciting for Sylvia), pea soup with cheese and onion bread (good but a bit stodgy), making a pom pom, chips (roasted not fried), watching the Umbrellas of Cherbourg (an excellent film), and finishing reading The Secret River by Kate Grenville (amazing).

You would think there was not enough time for the internet in all of this.  Actually you would probably be right.  There is enough to do without getting lost in the interwebs.  Yet I missed it.  I couldn’t check the weather (it rained on the washing), nor find the guidance I needed to make pom poms.  E wanted to find a crucial crossword clue and look up films that were on the telly.  Instead I read more of the paper and did more of the Samurai Sudoku than usual.  I sorted photos on the computer rather than blogging.  Most importantly, I couldn’t consult my blog for notes about making rhubarb crumble. 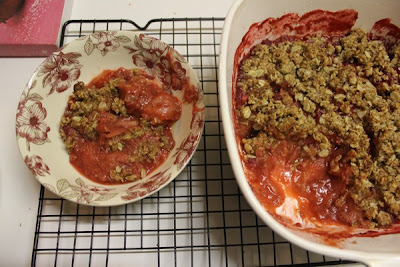 You see, I had bought four large stalks of rhubarb and a punnet of strawberries at the market on Friday to make crumble.  I love browsing through my cookbooks but when I have a very particular idea in mind I usually go for the electronic search and find.  But with my dessert cookbook and some of the learnings from blogging, I muddled through making a crumble. 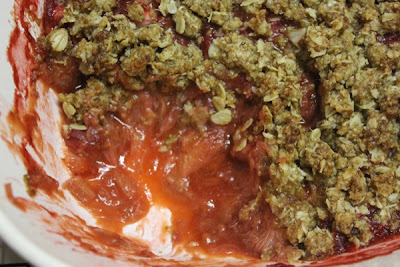 Surprisingly, it is one of the nicest I have made (and more successful than my previous attempt that I found when I got back online).  The flavours were right – the fruit was slightly on the tart side but was balanced by the sweetness in the crumble.  The textures were lovely with my favourite oats and coconuts included in the crumble.  E thought it ok but it had too much fruit (though any fruit is too much for him).  Sylvia loved it and savoured every mouthful.  E wanted it with custard which seemed like a good idea but I couldn’t remember how to make custard (from a packet) without my blog notes and it wasn’t a pretty sight.  So it seems I can get by without my blog but it just isn’t the same.  Hopefully it will be back up soon.

Put the rhubarb, lime juice and sugar into a medium saucepan.  Gently cook over low heat until the rhubarb releases its juices and the sugar is mostly dissolved.  Then bring to the boil and simmer about 9-10 minutes until the rhubarb is soft but has kept its shape.  Remove from heat and add strawberries.

While rhubarb is cooking, make crumble by rubbing butter into dry ingredients in a medium bowl.

Grease a medium baking dish and pour in the rhubarb mixture.  Scatter crumble over the fruit.  Bake at 180 C for about 25-30 minutes or until the crumble is golden brown and the fruit is bubbling around the edges.

On the stereo:
The Best of Tubular Bells: Mike Oldfield
Posted by Johanna GGG at 13:31