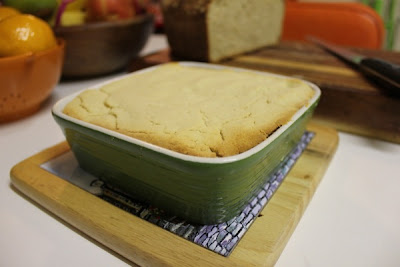 We have a bumper crop on our potted lemon tree.  In its first few years it only yielded a few lemons.  Now it is flourishing.   I never use lemons in huge quantities, particularly as I don't like sweet lemon desserts, so I am scratching around for ways to use them up.  Which means I am prompted to try recipes that intimidatd me.  Like baked almond feta.  Yes, I mean vegan cheese! 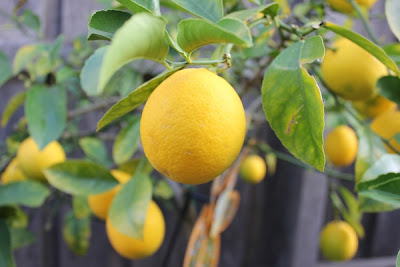 To see my lemon photos you might think that this recipe uses lots of lemons.  I was disappointed to find that 1/4 a cup of lemon juice only requires 1 lemon.  So I added a little more.  I have plans for a lemon cake and to give some away.  It never rains, it pours! 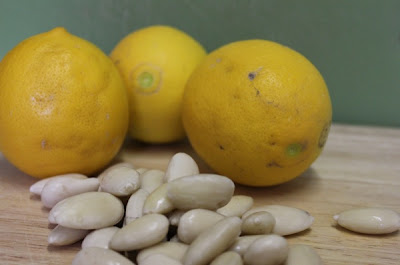 Lemon dilemmas aside, I am quite taken with the idea of vegan cheese.  If only they didn't take so long to make.  I soaked the almonds for 2 nights because I didn't quite get around to making the feta after the first night. 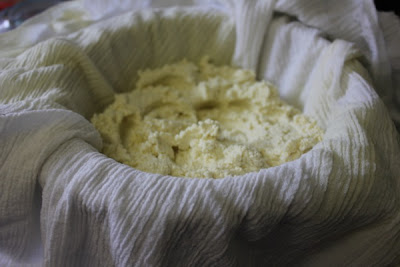 I did a lot of other things instead.  Like baking a honey and oat bread (which I intend to post about later).  I planned that last night's dinner would be a simple affair of bread, 'cheeze' and vegetables.  Even so, I was cutting it fine.  I barely managed to get the cheese into the cheesecloth and get out the door for Sylvia's swimming lessons.  It didn't hang quite as long as the recipe said but I think this didn't do any harm. 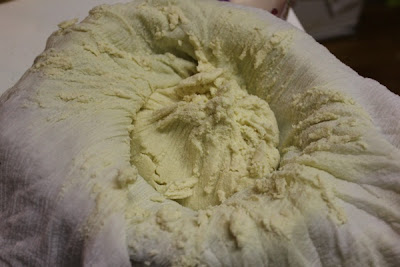 I patted it into the baking dish not long before dinner - with Sylvia helping.  If she had had her way she would have made lots of holes in it.  (Or 'oles' as she likes to say because suddenly she has lost her 'aitches'.)  She tried a teensy weensy bit of the cheese and decided she didn't like it. 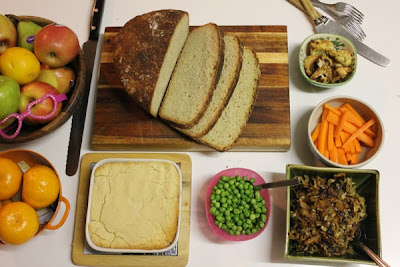 At least there was something for her in the side dishes.  She loved the roasted cauliflower, the peas and carrot sticks.  She had the tofu bacon without the fried cabbage.  Sadly for me, the pumpkin took too long to roast and sat in the fridge instead of our tummies.  It has been very good in a sandwich today with leftover cabbage and cheeze. 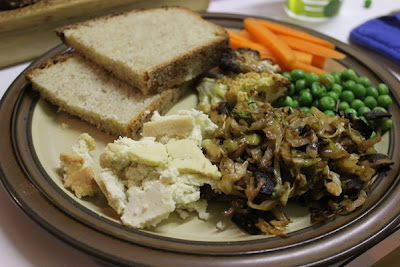 E and I were very pleased with the cheese.  It was very crumbly, but so is feta.  If anything, it could have had a bit more bite.  I am glad I added the extra lemon juice and I think next time I will add a bit of extra salt (like Ricki does).  Not perfect but as Celia says, "the true secret of successful cooking lies not in ingredients and recipes, but rather in experience and practice.'  I highly recommend reading her whole post on Celebrating Failure.  This was no failure but it deserves some practice to be at its best.

I am sending this to Laura of How to Cook Good Food for the One Ingredient: Lemon Challenge.

Blend well with other ingredients until almonds are well blended and the mixture is smooth.  You may have to stop and scrape down the sides a couple of times.  (I did this in two batches in my small attachment for the hand held blender - it took about 2-4 minutes for each batch.)

Prepare cheesecloth (I poured boiling water over the cheesecloth and then put it on spin cycle in the washing machine).  Wrap almond mixture in a cheesecloth and secure with a rubber band.  Place over a sieve or colander with a container under it to catch any drips and leave over night.  (I left mine for 7 hours and occasionally squeezed it which seemed to draw out some liquid.)

Oil a small baking dish and place almond mixture into this.  We patted it down with our hands.  Bake at 180 C for about 40 minutes until golden brown and showing some cracks.

Serve warm or at room temperature.  Store in the fridge.

On the Stereo:
This is my life: Shirley Bassey
Posted by Johanna GGG at 23:26