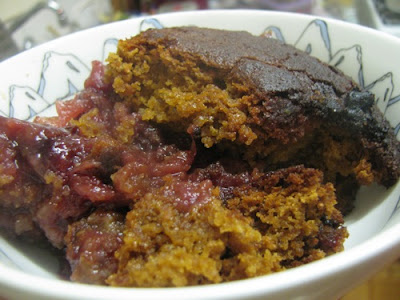 It has been an autumn of stewed plums.  Plums have featured in puddings, in smoothies, in slices, even on scones.  So when I finally made a recipes I had bookmarked for Rhubarb Gingerbread Sponge Pudding, I found myself substituting plums for rhubarb.  It seemed right. 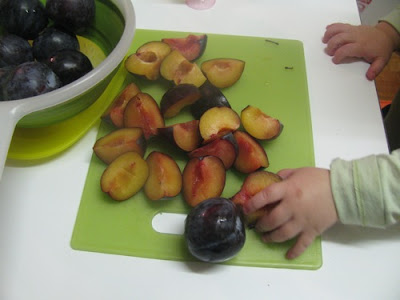 Sylvia has shared my enthusiasm for plums.  She loves stoning them and quite a few get eaten along the way.  She also helped stir the pudding.  I haven't been making puddings very often lately.  We have been trying to eat dinner with Sylvia, though it doesn't always happen.  If we don't manage to eat with Sylvia, we often find ourselves eating after 8pm.  Fitting in desserts is tricky. 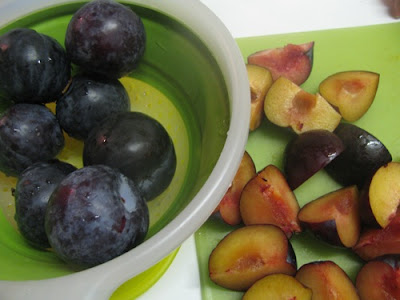 The night I made this pudding, I decided to make pizza on Turkish bread.  Anything challenging would have put an end to my plans to serve sweets (as my family would call dessert).  However I had bought the last hurrah of autumn's plums and they had to be used.  I thought it if I started early, Sylvia might have been able to join in eating sweets with us.  My timing wasn't quite right.  She loved eating the stewed plums while we ate the pizza. 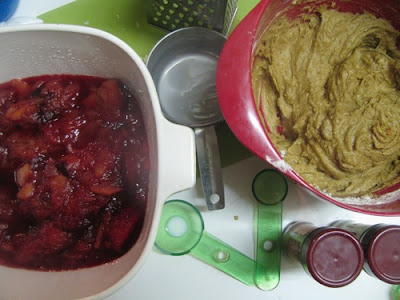 The stewed plums were delicious with the addition of maple syrup.  Their depth of flavour worked well with the spicy sponge topping.  I didn't quite get the recipe right.  In my rush, I got the amount of sugar wrong, accidentally used self raising flour, ran out of golden syrup and found it needed more time than the recipe suggested.  I wondered if it was because I didn't drain the fruit well enough.  However it still tasted good. 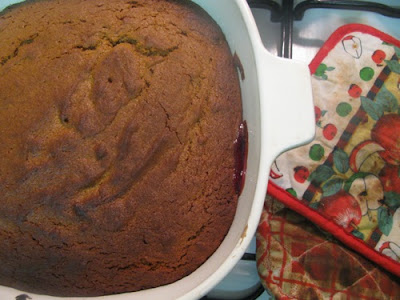 I also used some apples that my mum had given me from her tree.  It seemed quite floury to eat fresh but tasted wonderful when stewed.  We finally had our dessert late while watching the telly.   E was very impressed - though he could have done with less fruit.  We both decided plums were far better than rhubarb in this pudding.  It lasted us a few nights so Sylvia got a chance to taste it but picked at it with less enthusiasm than when she just had stewed plums.  I loved it and highly recommend it as a great winter warmer. 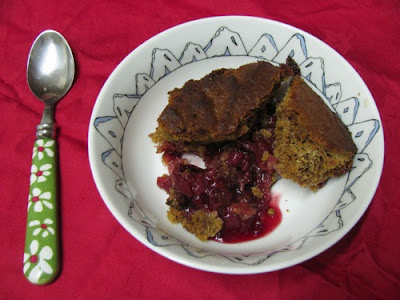 I am sending this recipe to Jacqueline of Tinned Tomatoes who is resurrecting the Bookmarked Recipes event, that was founded by Ruth.  The event encourages bloggers to share recipes that they have bookmarked (and haven't we all so many bookmarked recipes to try).

To stew the plums: Place vanilla, cinnamon, maple syrup and water in medium saucepan.  My cinnamon quill was quite flaky so I crushed it into a tea infuser so it was easier to remove at the end.  Simmer for about 6 minutes until syrupy, though mine was not very.  While syrup is simmering, wash, stone and quarter plums.  Add chopped plums to syrup and cook until just soft - about 5 minutes.  Remove cinnamon quill and discard.

To stew apples: Place apples, water and rice syrup in a small saucepan.  Bring to the boil and gently cook for a few minutes until apples are softened.  Check if they are sweet enough.  My apples were very sweet but others might need a bit of extra sweetening.

To make the pudding:  Cream the butter and sugar until pale and fluffy (I did this by hand).  Stir in golden syrup and/or treacle, and then the egg.  Fold in the flour, spices and salt.  Dissolve bicarb of soda in the milk (the recipe suggested heating the milk but I didn't do this).  Add to the batter and mix until combined.

To assemble:  Preheat oven to 180 C.  Grease a large square baking dish.  Mix the apples with the plums.  Drain off as much liquid as possible.  (Keep the liquid as a sweetener for smoothies or other dishes.)  Tip the fruit into the base of the baking dish.  Spoon the batter over the fruit and smooth with the back of a spoon.  Cook for 35-65 minutes (The recipe said 35 minutes but after that time my batter seemed uncooked when I stuck a spoon in to serve, despite a skewer coming out cleanly when testing it.  I cooked it another 30 minutes.)  Serve with cream, if desired.

On the stereo:
we bring you a king with a head of gold: dark britannia II: Various artists
Posted by Johanna GGG at 21:58