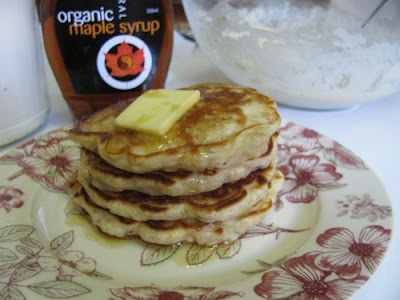 I love reading foodie magazines but I never make as many of their recipes as I intend.  Then they pile up in the house and I go through them in moments of good intentions.  I had one such moment recently and found a recipe for Banana Oat Hotcakes in a freebie magazine from a local supermarket.  Having tried oaty pancakes before, I was quite keen on one that had fruit inside it as well. 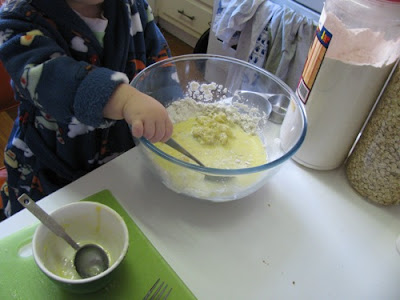 Sylvia is quite keen on pancakes so we have had them a few times recently for weekend brunch.  We had a lazy morning yesterday.  It is a long weekend here.  No need for hurrying.  Sylvia helped with mixing as usual.  She also insisted on bringing the chair to the stove to watch them frying. She is already showing that she is the daughter of a food blogger.  Lately, when I have got out my camera, she wants to take photos.  I found an old digital camera for her.  When I served her some pancakes she was clicking away.  She still needs to learn about the direction to point her camera.

She loved the pancakes.  Well she ate some of mine and then one of her own.  It is amazing watching her curiosity.  She was interesting in cutting them up with a (plastic) knife and then eating them with a fork.  I shouldn't have let her use the ceramic plate because she managed to send it clattering across the floor and got a wee fright. 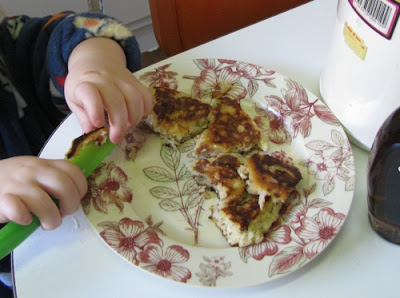 E was having a sleep-in.  His pancakes were cold by the time that her got up.  I don't mind cold pancakes but I couldn't believe he warmed them up by toasting them.  I was most displeased.  "Are you a bit naughty?" Sylvia asked E.  From the mouths of babes!  I loved the pancakes.  I think I prefer the denser texture of the oat pancakes to the ricotta hotcakes I made recently.

I made only minor amendments to the recipe.  I only had one banana so I halved it, which is really enough for our household.  I only realised as I was making these that the recipe called for instant oats.  I only stock rolled oats these days so I used these.  They were fine but might have benefited from a little soaking so I have altered the recipe slightly.  In an ideal world I would have made a raspberry sauce with the berries I have in the freezer but as usual I got distracted.  They tasted excellent with maple syrup.  E and Sylvia preferred honey. Definitely a recipe to repeat. 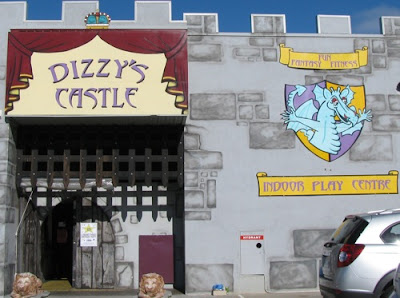 I was particularly keen yesterday that Sylvia have a good breakfast.  I was glad she had pancakes and a boiled egg.  We went to her cousins joint birthday party at Dizzy's Castle at lunchtime and the food was fairly ordinary, though Erica and Andy brought along superb gf chocolate birthday cakes for the birthday boy and birthday girl.

The kids weren't that interested in the food.  They were far more excited by all the play equipment.  It was only my second visit to one of these indoor play centres and Sylvia and I learnt the hard way what a drop slide is.  I was happy when her cousins took her off to explore all the climbing, little cars and balls.  She had a lovely time and has been telling us all about it today.

I am sending these pancakes to Yasmeen at Health Nut who is hosting this week's Weekend Herb Blogging #287, the event coordinated by Haalo and founded by Kalyn.

Melt butter and golden syrup together in microwave (or on stovetop).  Add banana, egg, milk, vanilla and oats.  Add flour and baking powder.  Mix til you have a thickish batter.  Heat a frypan over medium heat.  Melt a little butter in the frypan and use a paper towel to wipe most of it off so the pan is liberally greased rather than awash with butter.  Drop dessertspoons of batter into the frypan.  Fry a few minutes until a few bubbles appear and the mixture dries out a little to look cooked.  Flip over and fry another minute or two until the other side is golden brown.  Serve warm with butter and golden syrup or honey. 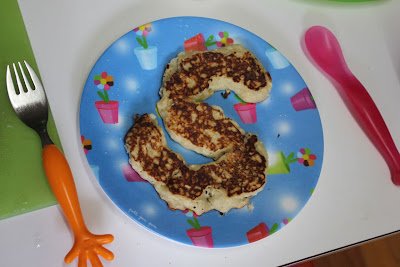 Update 4 May 2013 - am still making these regularly.  Sylvia likes her pancakes in the shape of her initial.  Have tried to veganise them with chia seeds instead of egg but a bit soft.  Today we were out of soy milk that I usually use these days.  I used coconut milk, added 1/4 cup dessicated coconut and only 1/2 cup self raising flour (and upped the baking powder to 1 tsp), and I used 1 and 1/2 banana.  They were lovely and light and a little tropical.

Update February 2015 - we are still making these pancakes regularly.  I have posted a vegan version of the Banana Oat Pancakes that we make if I don't have eggs in the house.

On the Stereo:
No need to argue: The Cranberries
Posted by Johanna GGG at 22:46